Maxime Vachier-Lagrave beat Wei Yi while Ian Nepomniachtchi blundered and lost to Jan-Krzysztof Duda on a day when fortunes couldn’t have been more different for the favourites to win the Grand Prix Candidates spots. There were also wins for Peter Svidler, who took down Harikrishna, and Veselin Topalov, who for a second Grand Prix in a row defeated Hikaru Nakamura in a first round game. Three very quick draws couldn’t dampen the mood as the remaining game, Wojtaszek-Grischuk, was a time-trouble thriller. 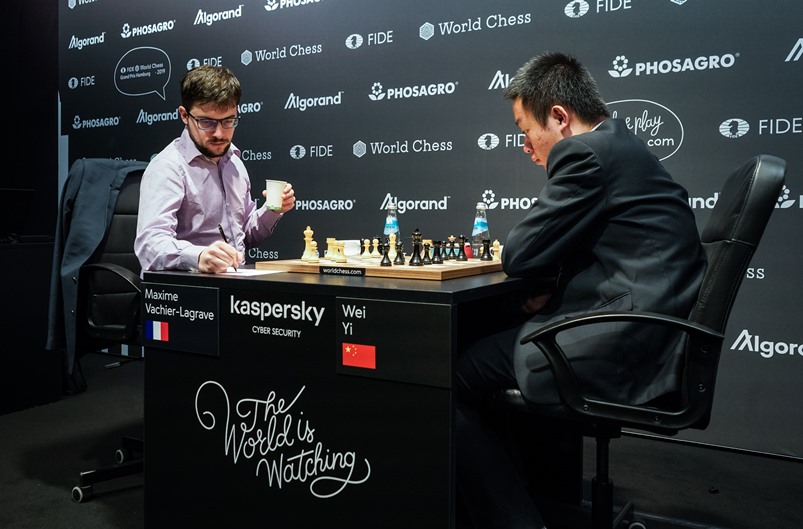 You can watch and replay all the Hamburg FIDE Grand Prix games using the selector below:

And here's the day's live commentary:

Day 1 in Hamburg threatened to be a damp squib, as the players in Jakovenko-Yu Yangyi, Navara-Vitiugov and Radjabov-Dubov took advantage of the lack of any rules on draw offers in the Grand Prix series to bring their games to a quick and peaceful end. The most surprising was the latter, where Daniil pulled off his usual trick of making seemingly reckless pawn pushes in front of his king and getting a great position. Black had in fact scored heavily in the few games played in the line, but suddenly Dubov accepted what it turns out was a draw offer from Teimour. Of course a draw with Black in a 2-game knockout match is rarely bad, but…

The rumblings of discontent over the state of classical chess didn’t last long, however, since we ended up with four wins and a last draw that was more dramatic than the wins. Let’s take a quick snapshot of each game:

Maxime Vachier-Lagrave faced Wei Yi’s Najdorf and with 8.Bg5 went for a line almost never played at the top level. It seemed to succeed in provoking the Chinese player into making concessions, and with the stylish 19.Qc4! Maxime took command:

The attack on f7 encouraged Wei Yi to exchange queens, but Maxime had seen that after 19…Qxc4 20.Nxc4 the weak pawns on b6, d6 and e5 were ripe for picking, even if ultimately it was White taking on a6 and pushing the passed a-pawn that decided the game in Maxime’s favour. That win also meant 16-year-old Alireza Firouzja climbed above Wei Yi to become the world’s highest-rated junior (anyone 20 or under):

The day got better for the French no. 1, since one of his big rivals for Candidates Tournament qualification (see our preview for details), Ian Nepomniachtchi, played the astonishing blunder 23…e4?? against Poland’s young star Jan-Krzysztof Duda:

“I couldn't believe my eyes when I saw this move,” said Duda afterwards. 24.dxe4? would be equal after 24…Rxd2 25.Qxd2 Nxe4, but Duda took just 40 seconds to respond with the refutation 24.Bxe4! Black can’t capture on e4 due to mate on g7, but then why else give up a central pawn? Ian never managed to answer that question and resigned on move 44. 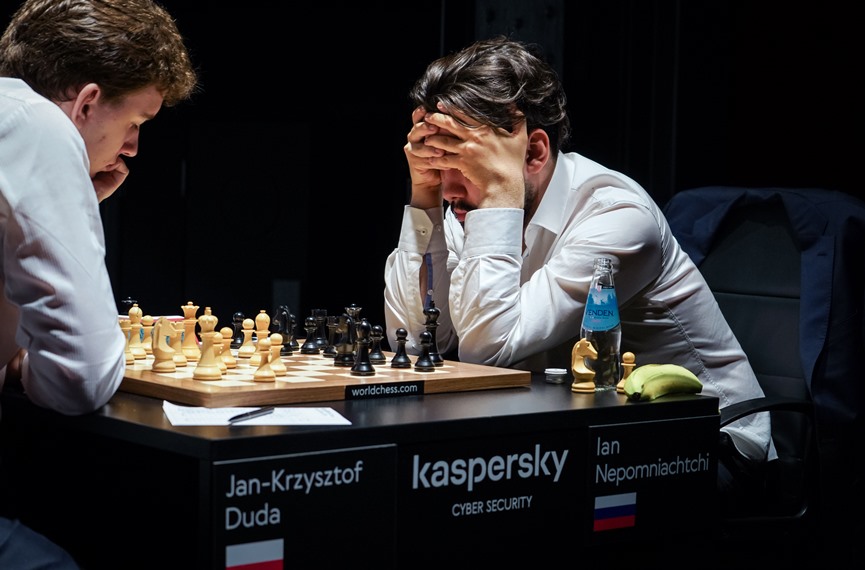 In Svidler-Harikrishna what at first sight seemed a harmless endgame for Black suddenly became treacherous, with Peter spoilt for choices as to how to exploit Black’s tangled up pieces. That’s perhaps why he missed or decided against the best way to meet 30…f5:

Peter played 31.axb6 and was still clearly better, but the royal road to victory was 31.d6! and after 31…fxe4 32.dxc7 the c-pawn is just too strong. White can support its queening with Rd2-d8, and the threat of axb6 has gone nowhere. 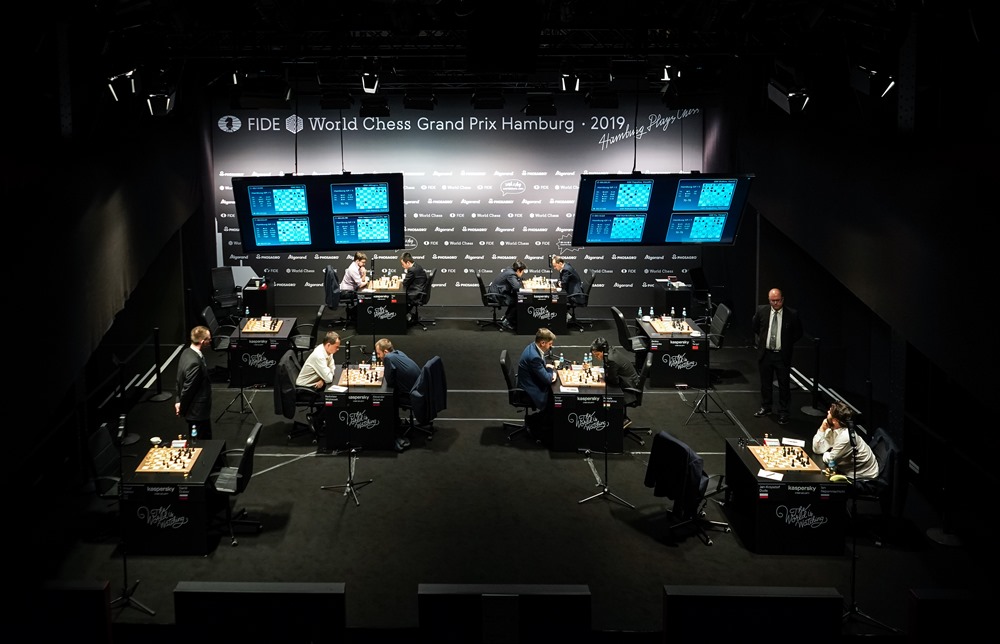 As in Riga the event in Hamburg has screens that are useful for the players, but too small for spectators to view | photo: Valeria Gordienko, official website

There were of course plenty more variations to check, and it’s a game that’s a lot of fun to analyse, but in the end that miss made no difference… and the final tactic was also sweet! Svidler took the black bishop on d5, although that seemed to allow the black a-pawn to queen:

If play had continued we would have seen 47…a2 48.Rd7+! (the only winning move) 48…Rxd7 49.Ra8 and White stops the a-pawn and has an easy win with his connected passed pawns on the f and g-files. 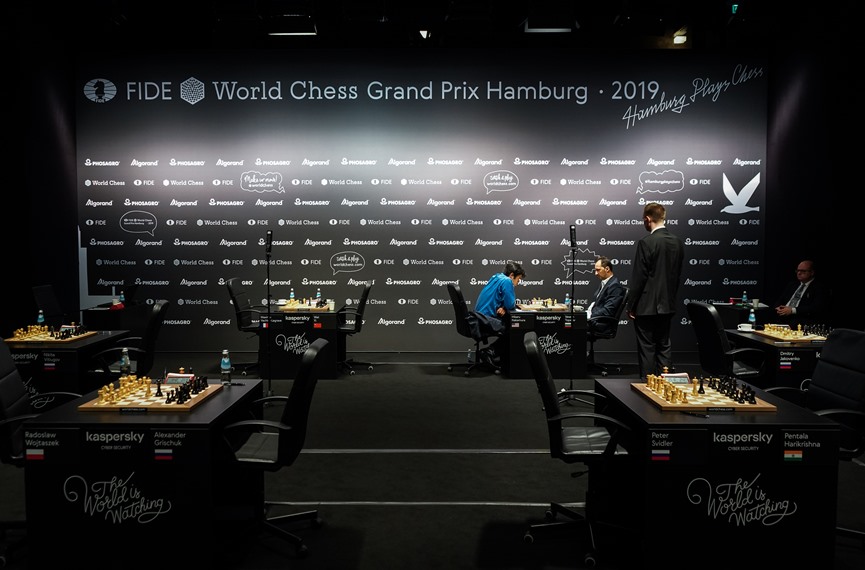 The long grind must have been agony for Nakamura | photo: Valeria Gordienko, official website

Perhaps the strangest game of the day was Nakamura-Topalov. The speed of Hikaru’s opening play suggested he’d prepared a novelty in the Anti-Berlin, but by the time he began thinking he was already worse. It would be all about his wayward knights, with 12.Nh4 already unconvincing before the other knight joined it on the rim:

16.Na4!? Bc6 17.Nb2 was a less than obvious manoeuvre, with Evgeny Miroshnichenko wondering later how many times in the game Hikaru had regretted putting a knight on b2. The strange thing was that although Veselin was the first player to gain a big advantage he was also the last player to win, as he slowly tortured his opponent. The problem of the misplaced knights never went away. Here they are after 52.Nxf2:

They were stuck to passively defending weak points, but here the defences are already overloaded, and with 52…Na5 53.Kh2 Nxc4 Black had finally broken through. A desperate sacrifice or two later the game ended on move 66. 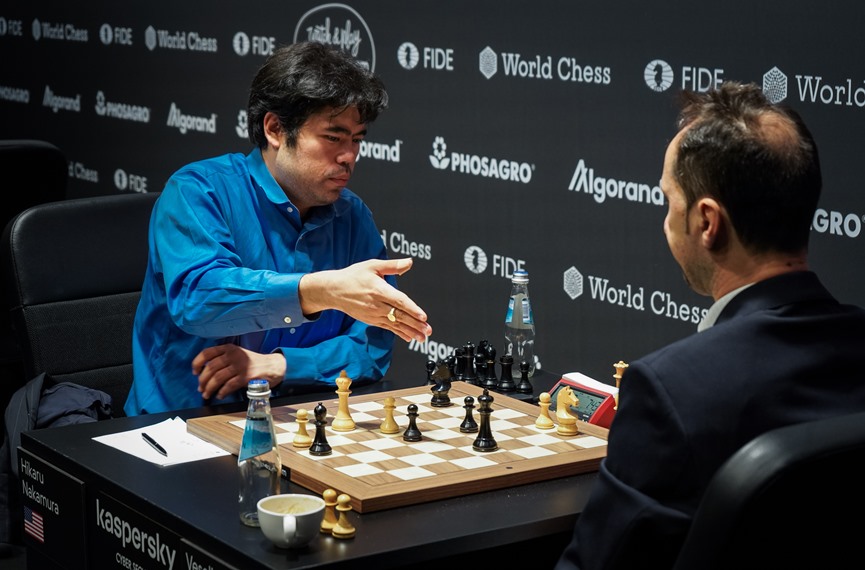 That was a case of lightning striking twice, since after three draws in the Riga Grand Prix Veselin had won the second rapid game to knock Hikaru out in Round 1. This time at least there’s a chance to fight back, though winning on demand with the black pieces is never easy.

The remaining game was a fantastic battle between Radek Wojtaszek and Alexander Grischuk, two players still hunting for potential Candidates qualification through the Grand Prix series. By move 22 Grischuk was down to 3 minutes, while Wojtaszek had a promising position and half an hour more. Not for the first time, however, that was when Grischuk began to take over, and after Wojtaszek made one passive move that got him into trouble he decided to go all-in instead. 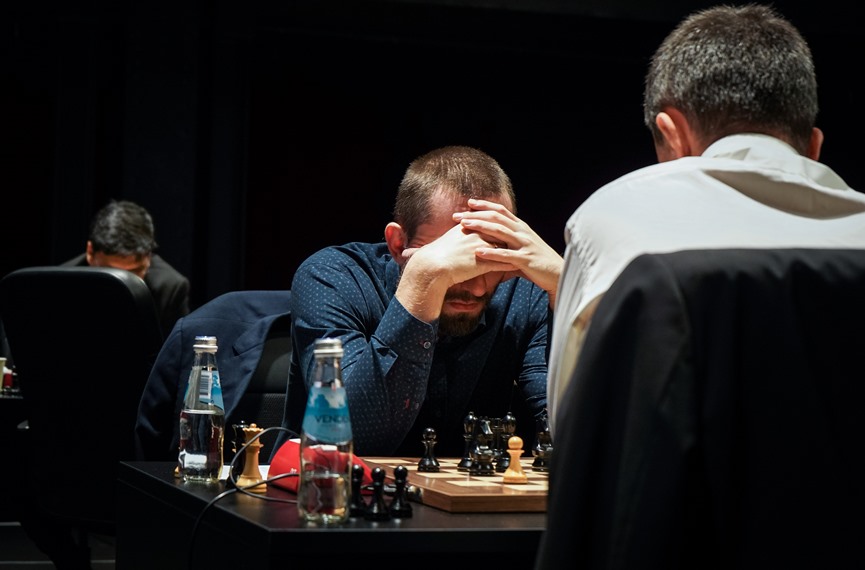 Against perfect play from Black it wouldn’t have worked, but as it was the tactics worked out beautifully! 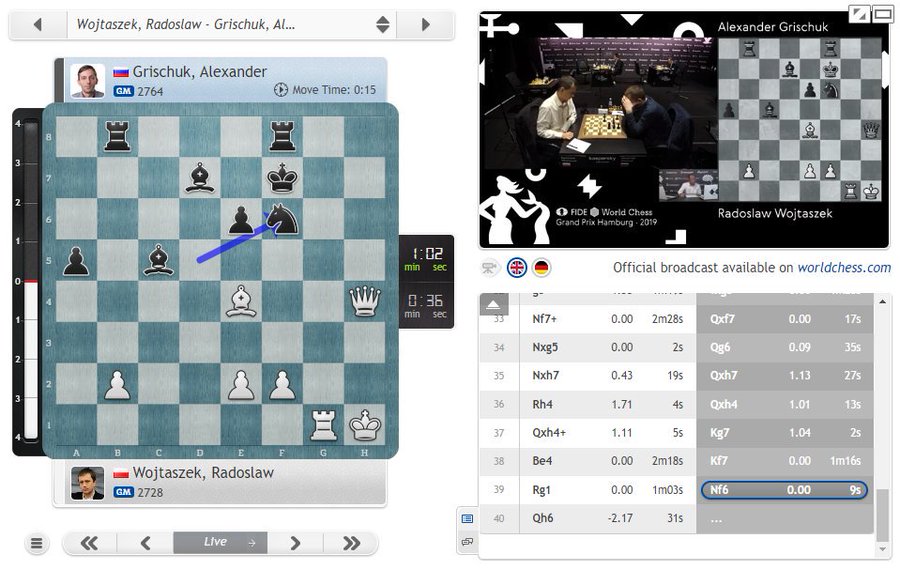 Wojtaszek had just 37 seconds to make the final move before getting an extra 30 minutes at the time control, and with 6 seconds to spare played 40.Qh6?! instead of the “only move” 40.Rg7+! The point is that after 40…Kxg7 41.Qg5+ Kf7 42.Bg6+ Black can’t go to e7 to escape perpetual check as 42.Qxc5+ Kd8 43.Qxf8+ wins the house. After 40.Qh6 multiple moves preserve an advantage for Black, but Grischuk also had just over a minute and with 4 seconds remaining played 40…Ke7?!. Radek could then calmly calculate and took the second chance to play the now less dramatic 41.Rg7+!, when after 41…Kd8 42.Qd2! the black king had too little shelter to avoid White forcing a draw. A fantastic fight!

So that means that on Day 2 four players, Wei Yi, Nakamura, Harikrishna and Nepomniachtchi already find themselves in a must-win situation or they’re out of the tournament. Don’t miss all the action from 15:00 CET here on chess24.