Maxime Vachier-Lagrave and Alexander Grischuk have set up a semi-final that will be hugely important in determining who qualifies from the Grand Prix series to the Candidates. MVL won the first game against Veselin Topalov and drew the second from a position of strength, while Grischuk bamboozled David Navara in their second classical game. Jan-Krzysztof Duda got to play a beautiful winning move after a blunder by Yu Yangyi to join them in the semi-finals. UPDATE: Duda will play Daniil Dubov after the young Russian beat 8-time Russian Champion Peter Svidler in Sunday's tiebreaks 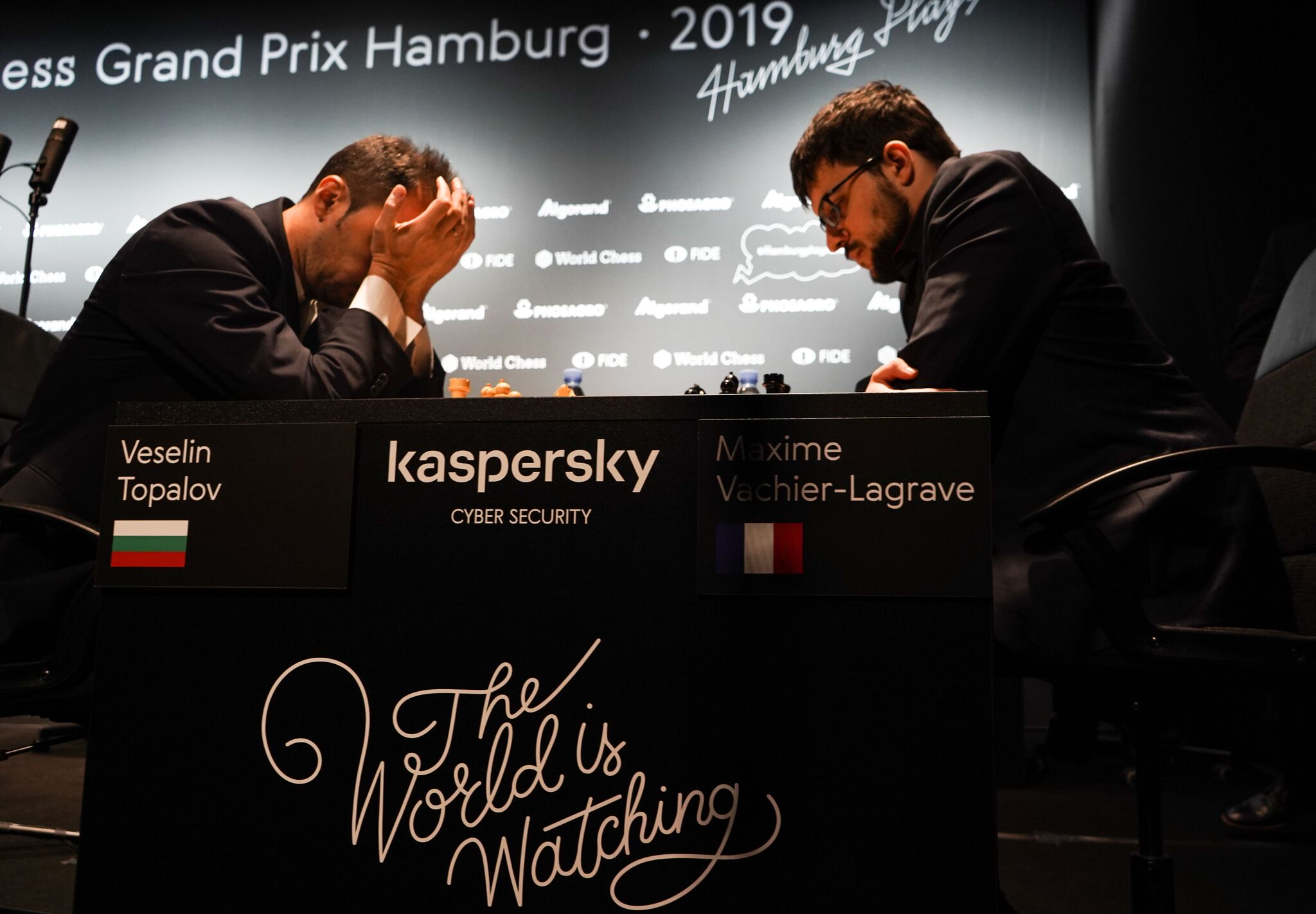 And here’s the commentary on the second day of classical chess during the quarterfinals:

Three quarterfinal matches were decided in classical chess, with the winners each scoring a bonus point for not requiring tiebreaks:

Veselin Topalov had hoped that an extra day to prepare would help him avoid history repeating itself, but it made no difference. Just as in the Riga Grand Prix earlier this year, he beat Nakamura in Round 1 and was then knocked out after losing the first game and drawing the second to MVL. In the first the hybrid Grünfeld-Benoni line that Maxime went for was a sign of intent, though Veselin was doing fine with White until he decided to go for an exchange sacrifice. It’s hard to criticise, since afterwards he was even clearly better at some point, but Maxime took over in the complications. The last chance, at least according to the computers, came after 35…Qd2: 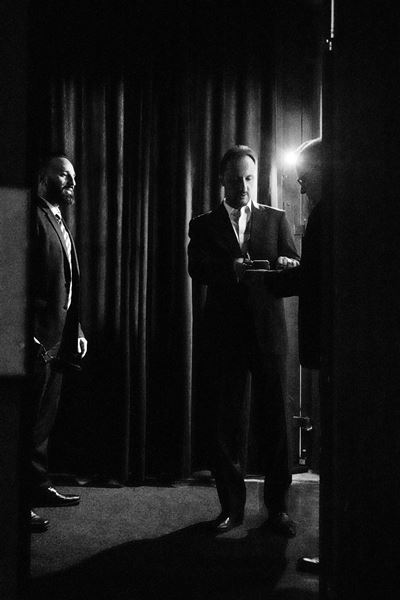 Veselin instead played the all too human 36.Bf1 and was doomed, even if he later “won” a piece and it briefly seemed it might not all be over for White:

In the return game Veselin played the French Defence but got nothing, and in fact was clearly losing at the end when he offered a draw. Maxime accepted, commenting, “At the end I could play, but why would I?” One answer would be to gain rating points, but it’s clear that all Maxime’s Candidates qualification eggs and now in the one Grand Prix series basket! 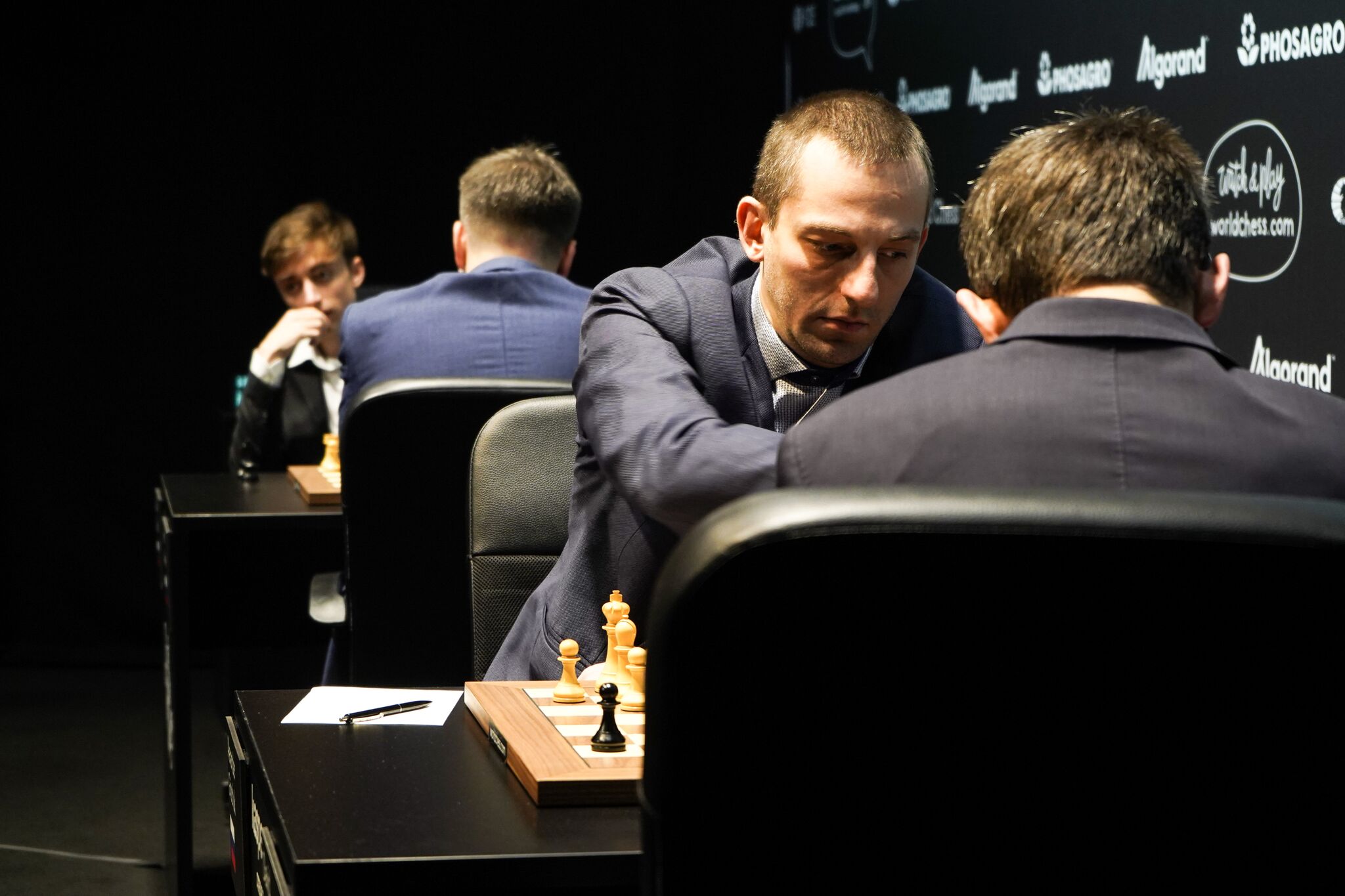 Maxime’s opponent in the semifinals will be his key rival Alexander Grischuk, who in the second game against David Navara varied on move 15 from a game his opponent had won against Kacper Piorun last year in the Bundesliga. Grischuk found an emphatic way to equalise and then, when Navara continued playing ambitiously, took the chance to pounce:

After 26.Rxh1 Qb6 White is forced to play a difficult rook ending a pawn down, but that wasn’t a good enough reason to go for 26.Qf6?!, when 26…Bc6! just kept an extra piece (it wasn't too late to blunder - 26…Bb7?? would lose on the spot to 27.Rd8+ Rxd8 28.Qxd8#). It was still complicated, but none of the tactics were working in White’s favour and Grischuk went through. 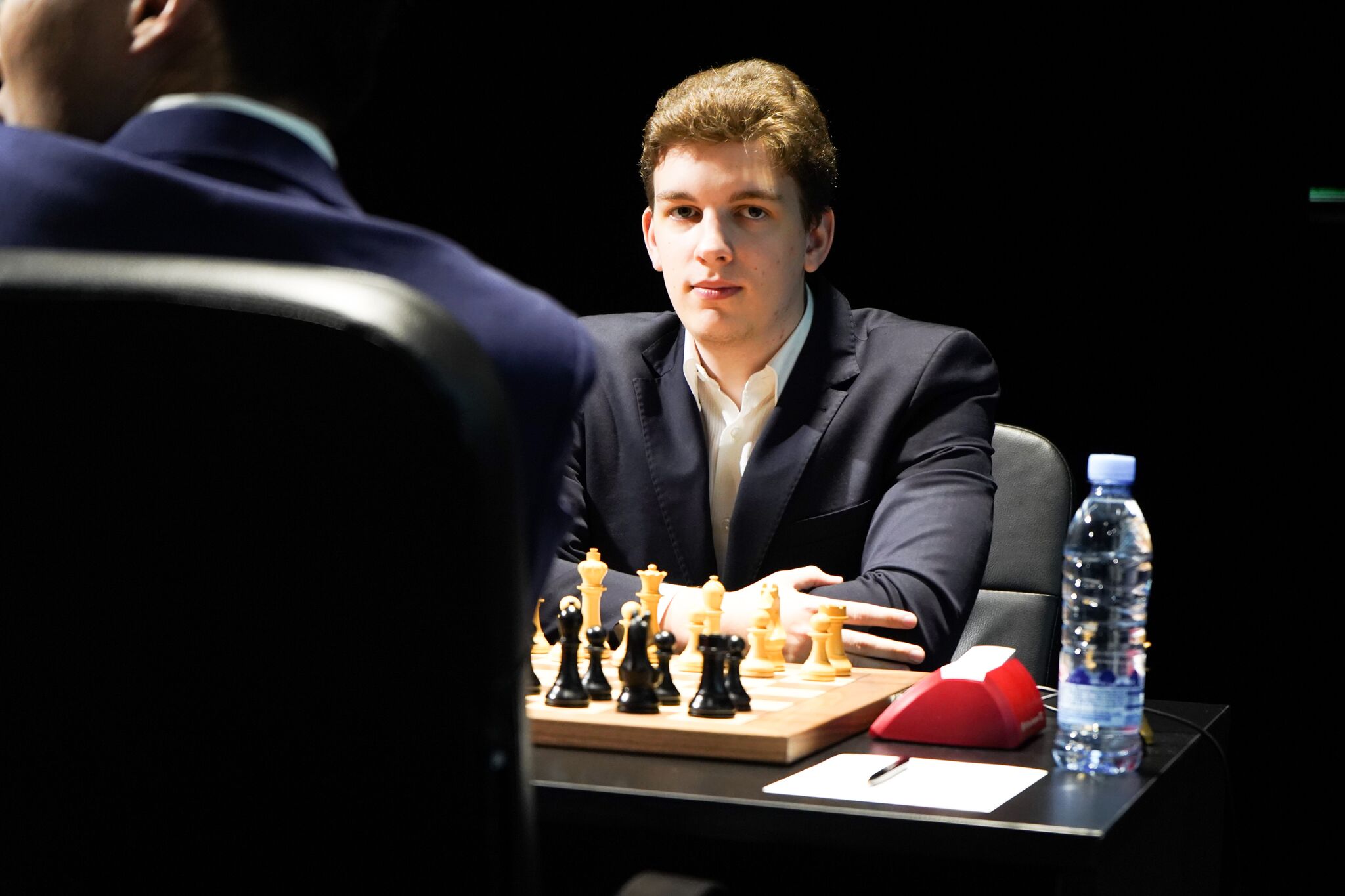 As in his first round match against Dmitry Jakovenko, Yu Yangyi put huge pressure on Jan-Krzysztof Duda with the white pieces, but one slip and the first game ended in a draw. In the second it was Duda pressing with White, but just when the game could have fizzled out into a draw Yu Yangyi played a fatal blunder, despite taking a 12-minute think: 32…Kh3??:

33.Bxg4+! was a simple but beautiful winning blow. 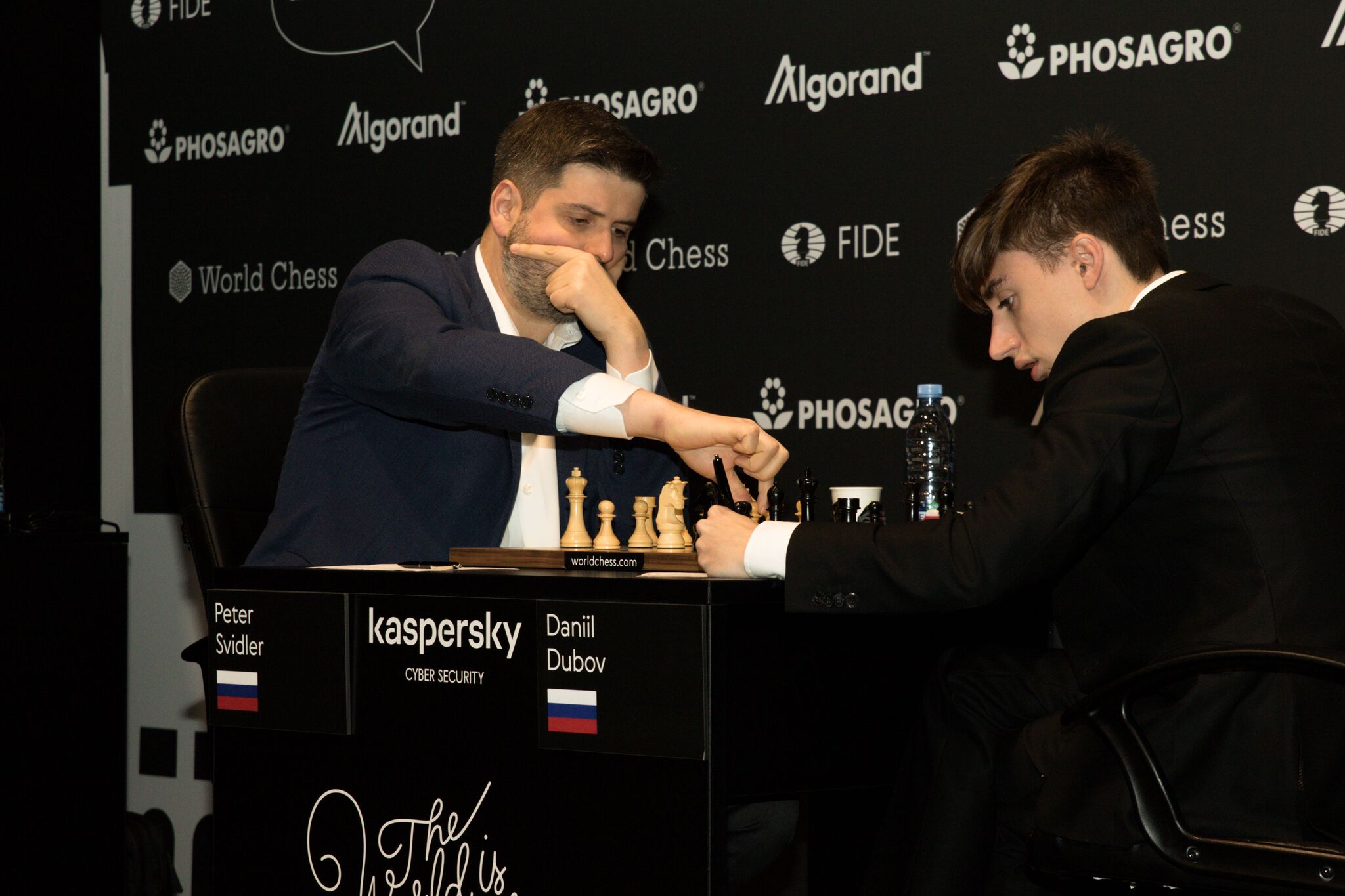 Duda will play either Peter Svidler or Daniil Dubov, since their match was the only one to go to tiebreaks. The games finished in 23 and 21 move draws, but they were still intense theoretical battles, almost ironically given Peter’s description of playing Daniil and his Grünfeld analysis files in Game 1:

I was trying to figure out during the game if this file is older than my opponent. It probably is, and less trustworthy, but the thing is Daniil is one of my favourite types of opponents, as a spectator and also as a player to play against. Because as a spectator he’s a brilliant, creative player, and as an opponent I can just completely ignore preparing, because he plays everything and I can just tell myself I can never guess what the first move will be and just read a book. It’s very pleasant!

After Game 2 Svidler commented, “Against him 1.a3 is arguably a better choice!” since his attempt to test Dubov in the Rossolimo Sicilian that his “employer” Magnus Carlsen had used in the London match proved unwise. Peter played a line Anish Giri had used to crush Le Quang Liem a couple of days ago in rapid in Bucharest:

Here Le Quang Liem played 13…Qc7 and Giri thought for 10 minutes before replying 14.Be3. Perhaps what Giri was expecting was 13…Qa5, as played by Dubov, though that was the cue for Peter to spend 13 minutes himself on 14.Be3. Daniil, whose preparation was by no means exhausted by what we saw in the game, was complimentary about Peter’s efforts, and said that perhaps in five years White will have found a way to get a real advantage!

UPDATE: Dubov qualifies for the semi-final

Daniil Dubov plays Duda in the semi-finals after a win in the 1st 10-minute tiebreak game gave him victory over Peter Svidler.

The two 25-minute games had seen Peter dominate on the board, but not on the clock, and particularly in the second game more time might have made all the difference: 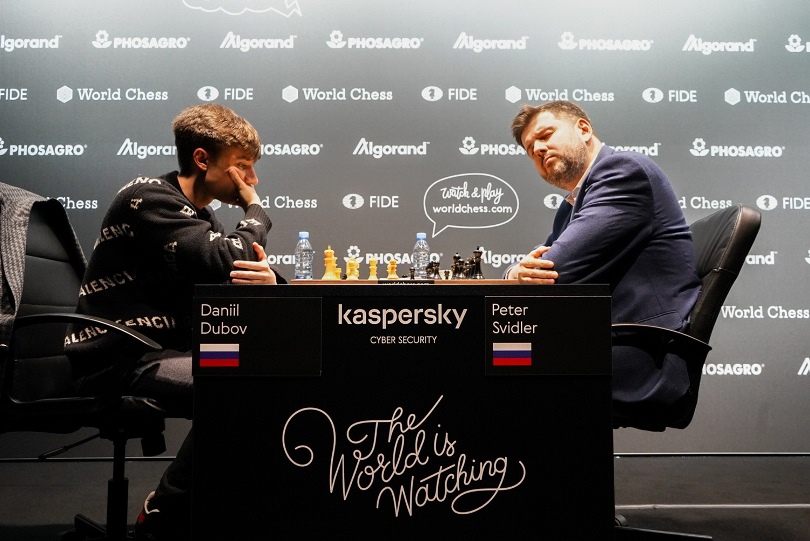 No-one said it was going to be easy | photo: Valeria Gordienko, official website

In the first 10-minute game Peter again had White, but something went wrong from the start and Dubov was able to liquidate into a winning rook ending. Needing to win with Black in the second game, Peter tried the Dutch Defence, but the way it went is unlikely to have increased his fondness for that opening. He accepted a draw on move 18 in what was already a hopeless position.

There's no rest day now, despite Grischuk's campaigning, so the semifinals begin on Monday. Watch all the games live here on chess24 from 15:00 CET on Sunday.