Alexander Grischuk described the first game of the Moscow FIDE Grand Prix final as an “opening catastrophe”, which left him an hour behind on the clock with the white pieces after 18 moves. Ian Nepomniachtchi failed to find a killer blow, however, and after a draw Grischuk quipped that at least in the starting position of the next game he’d have “some counterchances”. So it proved, and Black even had the potential to be better when a draw was agreed in 23 moves. It all has to end in Wednesday’s tiebreaks. 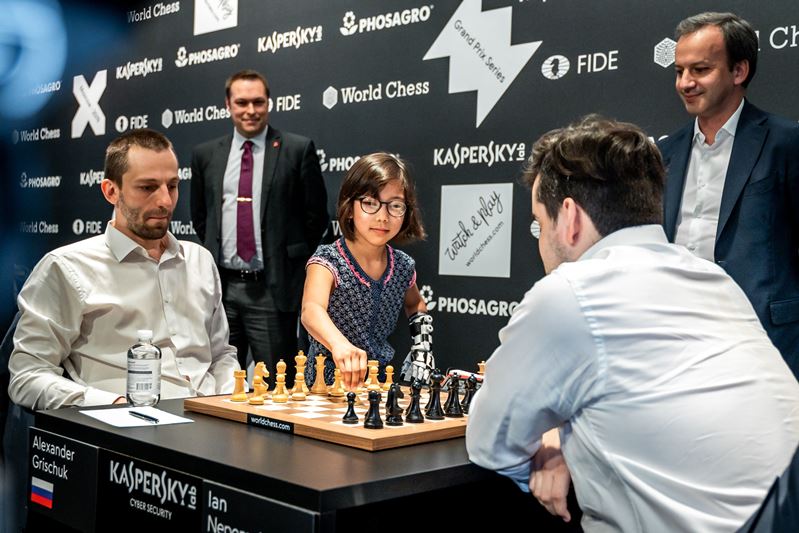 10-year-old Albina Ysmailova, who has a chess-themed prosthetic hand, got to the make the first move of the final alongside FIDE President Arkady Dvorkovich | photo: Niki Riga, World Chess 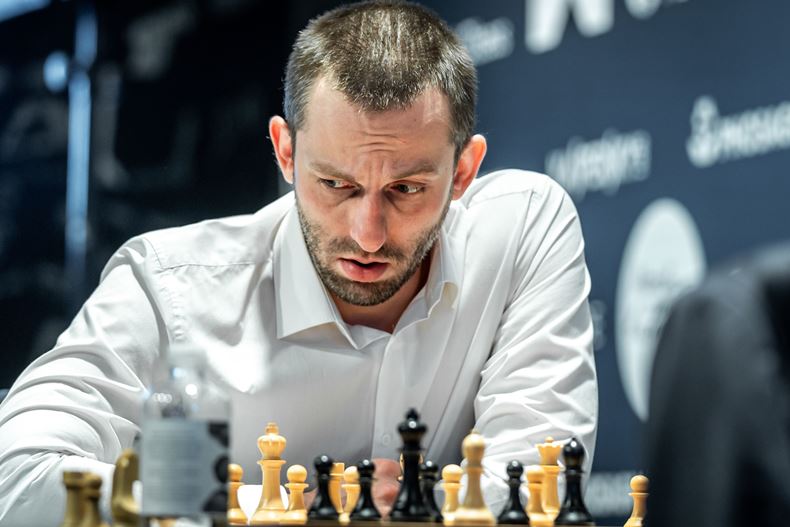 It was a tough, tough start to the final for Alexander Grischuk | photo: Niki Riga, World Chess

Ian Nepomniachtchi has a reputation for playing very fast, sometimes too fast, while Alexander Grischuk is famous for his disregard for time…

That made it a perfect storm in the first game of the final, where Nepomniachtchi went for an old exchange sacrifice line of the Grünfeld Defence and blitzed out his first 17 minutes instantly. The last few had caught Grischuk completely off-guard (in his defence, 15…Bd7 was a novelty):

It was an opening catastrophe for me - not just he played a very good line, but also it seemed like it was the only thing he was preparing for! I don’t know why. And also even in this position with the exchange down it’s ok for Black, of course, and there are like ten normal ways to play for him, but at least everywhere White has easy play, initiative, it’s no advantage. But this 14.0-0 Qb6 15.Qc3 Bd7 somehow escaped my attention. There must be a way to equalise, but I didn’t find it. Then it was a terrible position, but somehow I managed to set up a defence. With this h4, g3, at least I don’t have back-rank problems, and the queen on a5 – because if pawns get to b4, a5 then I thought it can just become very bad. Somehow I managed to defend. 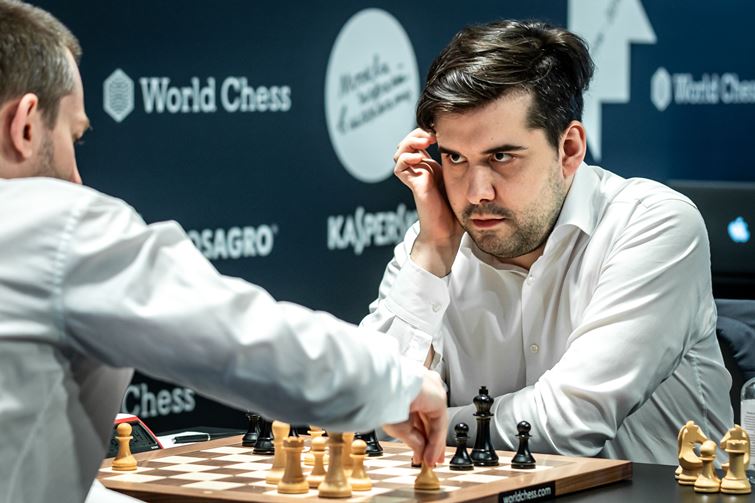 By move 18.Qf3 Grischuk had 36:43 on his clock to 1:36:55 for Nepo (players start with 1 hr 30 mins), and by move 26 Grischuk dipped under 3 minutes while his opponent still had well over one hour on the clock. It was an extremely unpleasant position to find yourself in, but not exactly unknown for Alexander, who managed to make no noticeable mistakes before the game ended in a draw on move 38. None of the players’ suggested improvements afterwards impressed the computer, which always points out a refutation.

For instance, after 25.Bf3 Nepomniachtchi played 25…Be8 but later suggested he should have tried 25…b4, with the threat of Bb5 and completely blocking the queen out of the game:

As Ian pointed out himself, however, 26.Be2! seems to maintain the balance. He summed up:

It was very, very suspicious for White, but ok, Sasha defended very well, I think. 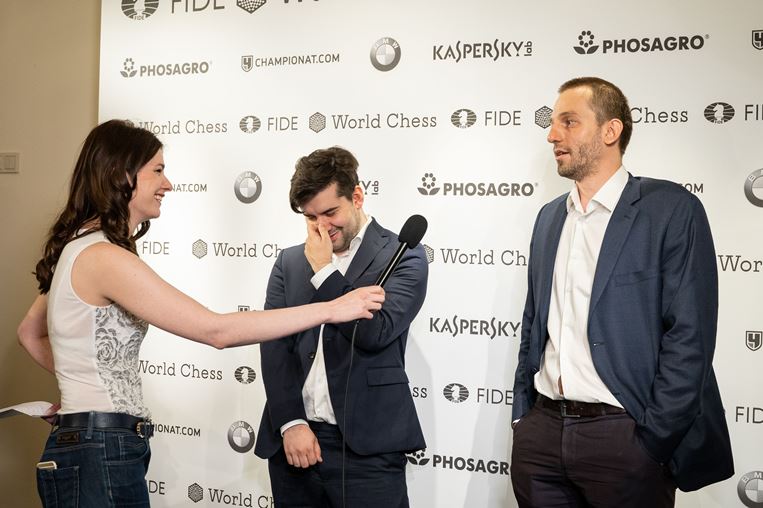 On a tough day Grischuk finally got a chance to really shine in the post-game press conference:

For me the only good thing about today’s game is that I feel like tomorrow I’m playing White again. At least I don’t think I’m supposed to get a worse position than I got today. At least the starting position of tomorrow’s game is definitely better than what I had today. At least there are some counterchances, and so on! 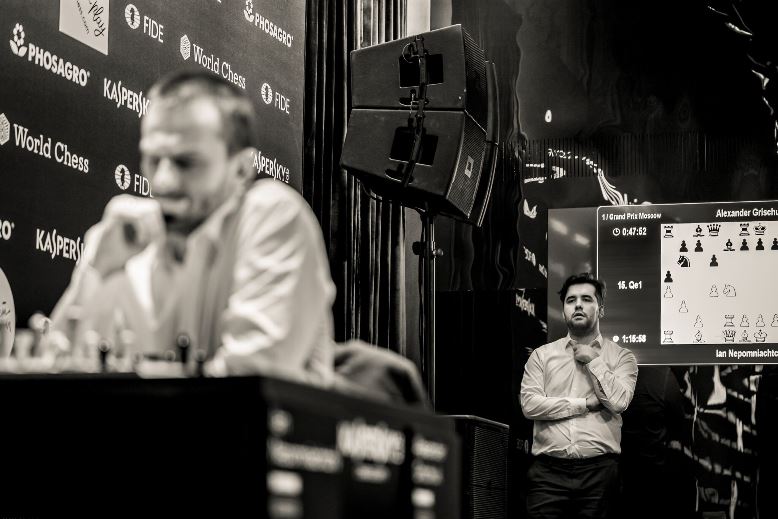 Grischuk would have an easier day at the office | photo: Niki Riga, World Chess

When the second game began with the 5.Re1 Berlin hopes weren’t high for excitement, but Nepomniachtchi at least chose one of the most outlandish lines in modern chess theory, 10.Re2:

It’s the kind of move that looks like a mouse slip, but players have had to treat it seriously since Magnus Carlsen tried it against Sergey Karjakin in a World Championship match. The aim is to provoke 10…b6 before the rook completes its journey back to e1, but here Grischuk copied Vladimir Kramnik against Vladimir Fedoseev earlier this year in Wijk aan Zee with 10…Nc4. 12.a4 (not Fedoseev’s 12.c3) was already a new move, but although Nepo thought he should be able to gain a real advantage there was always something missing. Perhaps it was another rank on the board!

Or at times the players…

But the game fizzled out into a 23-move draw: 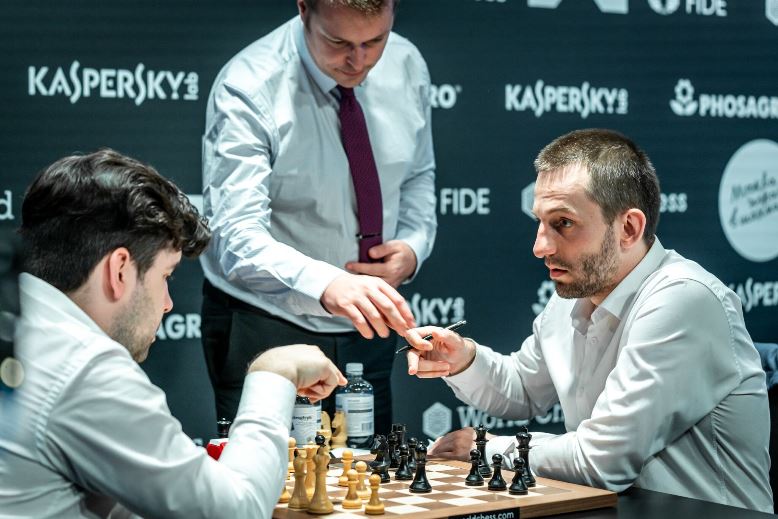 There was a lively post-mortem | photo: Niki Riga, World Chess

Nepomniachtchi was a little worried that his king was too distant from the weak c2-spot and decided to offer a draw “before it was too late”. Grischuk accepted, though he also felt the initiative had swung in his favour:

Maybe I’m slightly better, but I was not sure, and the game was not going my way at all. I was definitely slightly worse, so it was not that easy to start playing for a win at full steam.

We should perhaps have expected two draws in classical chess given the balance of power between the players on the live rating list!

Now it goes down to tiebreaks, with up to 7 games, including Armageddon, possible on Wednesday in Moscow. What can we expect? Well, “I’m not Nostradamus!” was all Grischuk would venture on the topic, while the one certainty is that the tournament will end. Nepomniachtchi welcomed that fact!

Somehow I was very optimistic before this tournament and I wanted to play to the very end, but right now I’m more or less happy that this will surely be the last day for this Grand Prix, so finally we would both have some rest after the playoff. I think it will be fun!

Tune in again to commentary with Evgeny Miroshnichenko and Daniil Yuffa live from 14:00 CEST here on chess24!