World Champion Magnus Carlsen showed no mercy to his second Michael Adams as he increased his score with the white pieces against the Englishman to a bruising 7.5/8. That win took Carlsen into the sole lead as Fabiano Caruana and especially Viswanathan Anand appeared to miss winning chances. Levon Aronian could breathe a sigh of relief that the damage against David Baramidze was limited to an early draw. 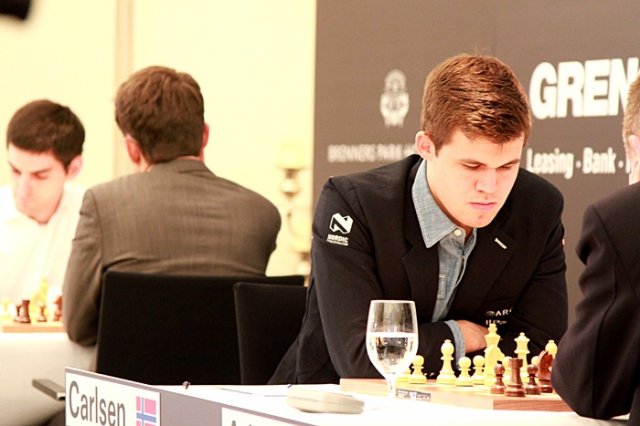 It was as if the whole of Team Carlsen was ganging up on one of their members on Tuesday, with Jon Ludvig Hammer explaining Carlsen’s dominance over Mickey Adams as follows on Norwegian TV:

It’s certainly true that both players specialise in incredibly subtle positional manoeuvring that often bamboozles their opponents. The game, which started with Carlsen playing the English opening, soon left the beaten path, with yet another Carlsen second, Peter Heine Nielsen, describing the position as “a rather novel structure”. He started to like the position of “the boss” after 14.Rf4, and both players and the commentators felt 15.a4 was a strong move, both preventing Black from putting a pawn on a4 and seizing space:

Still, Adams said that when he managed to play the 21…c5 break, “I thought I solved most of my problems.” It started to get critical, though, after the mysterious 30.Be1:

Nigel Short commented that despite being a tremendously strong player Adams has a weakness:


He’s got a slight tendency to avoid concrete moves – an instinctive tendency to go for positional solutions.

Here the sharp 30…g6! would have given Black excellent chances, but after the more “abstract” ‌30...Qe8?! things started to go downhill fast. Adams himself had a simpler explanation:

I was running a bit short of time and I just played horribly.

The final straw came after 35.Rxb7:

Adams failed to play the move it seemed he’d prepared – 35…Bxa5 – later despondently commenting, “it’s already gone by then”. His 35…Qa8 enabled Carlsen to hold on to the passed pawn long enough to force a won rook ending. His grip never eased, although the game only finally ended – for a second day in a row for Magnus – on move 64. 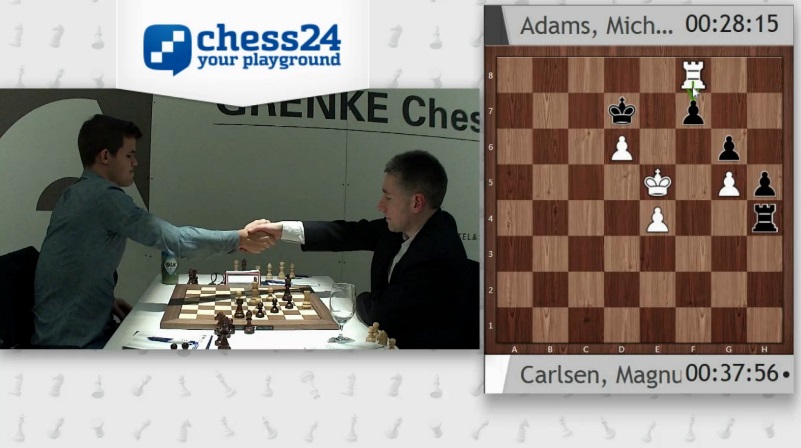 It ended a “barren spell” for the World Champion, who is of course still on track to win his second supertournament in a row!

Watch the full post-mortem below:

That was a very welcome win for the tournament as well, since the other games flattered to deceive.

Vishy Anand has good memories of playing White against Arkadij Naiditsch in Baden-Baden, since he won the 2013 GRENKE Chess Classic after a bizarre final round game in which Naiditsch only really paused for thought when he’d raced into a lost rook ending. Something rather similar happened in Round 2 in 2015. 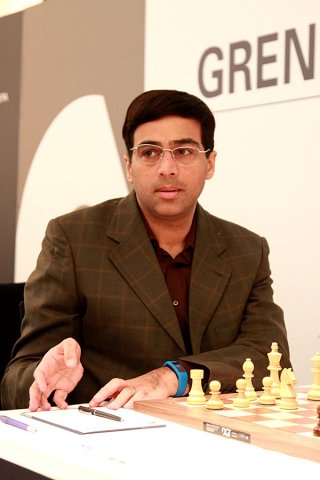 Vishy also struggled to finish off opponents in the early stages of the GRENKE Chess Classic in 2013 | photo: Georgios Souleidis, official website

Naiditsch took little more than one 10-minute think before finding himself in the following ending after 17.Ne5:

As Nigel Short remarked more than once on the live commentary, the more (pawn) islands the better for Ministers of Tourism, but not for chess players. Apart from Black’s isolated pawn he also has a knight on the rim and less space. Naiditsch summed it up:

Of course I misplayed horribly the opening and got a very bad position.

When Anand’s rooks later made it onto the seventh rank it all looked highly promising, but Naiditsch defended energetically and Vishy “couldn’t nail it”. For more on the game take a look at the players’ post-game comments: 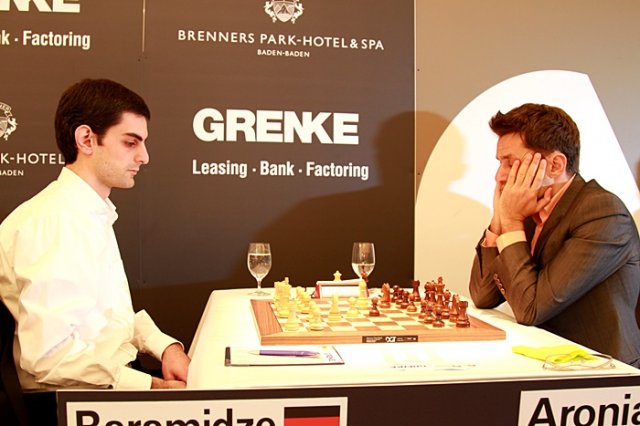 Admittedly Aronian hasn't been much of a Goliath over the last year... | photo: Georgios Souleidis, official website

On paper the one game you’d expect to finish in favour of the higher-rated player was Levon Aronian’s encounter with a player he outrated by almost 200 points, David Baramidze (2594). However, Jan Gustafsson and others have kept making a point:

David is no average 2600 player. If he survives the opening he’s a very strong player.

That’s quite a big “if” at these rarefied heights, but in fact the Anti-Berlin he played against Aronian eventually gave him a very promising position where it looked as though Aronian was going to suffer. Instead 25.b4?! dramatically curtailed the players’ afternoon work:

Aronian seized his chance to clarify the situation with 25…c5! and the remaining moves were blitzed out at blink-and-you’ll-miss-them speed.

Aronian and Baramidze were therefore the first players into the commentary room:

That leaves “only” Caruana-Bacrot, which was the day’s most enthralling encounter.

It looked at first glance as though Bacrot had a dream position with the black knights bossing the board, but you can never risk giving Caruana an inch:

Here, to Jan Gustafsson’s dismay, first Peter Heine Nielsen, then Magnus Carlsen, then Fabiano Caruana, then Etienne Bacrot all felt Black should have played 14…a5, shutting up the queenside in order to concentrate on the kingside. Bacrot himself said he didn’t play it since he, “overestimated the position”. He went for the move computer’s advocate, 14…g5, but after 15.a5 it didn’t take long for Caruana to seize the initiative. He kept repeating afterwards that although the black pieces look menacing he couldn’t see any real threat to his king. 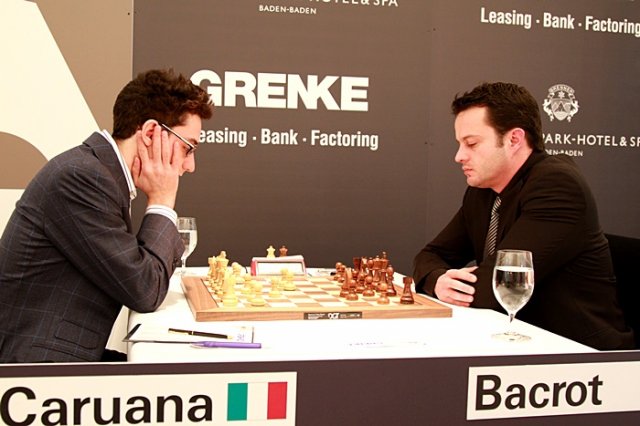 It was a game of swings, though, and with the time control approaching Black’s pieces did finally whip up activity on the kingside, until it was Bacrot who felt himself unlucky that White had the saving resource 40.Rh8! (note that both players were down to under a minute):

Queens were exchanged to leave Caruana a pawn up, but although Magnus admired the way his rival managed to keep the black rook boxed in on b7 the advantage eventually fizzled out into a draw. It was a game that would certainly repay deep analysis, but for now we have the players’ explanations after the game:

That draw meant that we have two “former world no. 2s” in Baden-Baden, since Alexander Grischuk is now rated a smidgen above Caruana on the live rating lists. Of course both on the lists and in the tournament there’s a familiar no. 1:

Round 3 features the headline clash Aronian-Caruana, the “revenge match” (Naiditsch won their last game at the Olympiad!) Naiditsch-Carlsen and a chance for Michael Adams to get back on track with a win:

Watch all the action live on chess24 with commentary by Jan Gustafsson and Nigel Short! You can also follow every move with our free mobile apps: