Levon Aronian has taken the lead in the race to qualify for the 2020 Candidates Tournament after beating Wang Hao in Round 7 of the FIDE Chess.com Grand Swiss on the Isle of Man. That was the only win on the top 12 boards, with Levon catching Fabiano Caruana on 5.5/7 after the American was unable to exploit Alexander Grischuk’s time trouble. Wesley So moved within a point of the lead by beating Ganguly, while 13-year-old Raunak Sadhwani has secured the grandmaster title with 4 rounds to spare after a 7th game unbeaten against strong grandmasters. 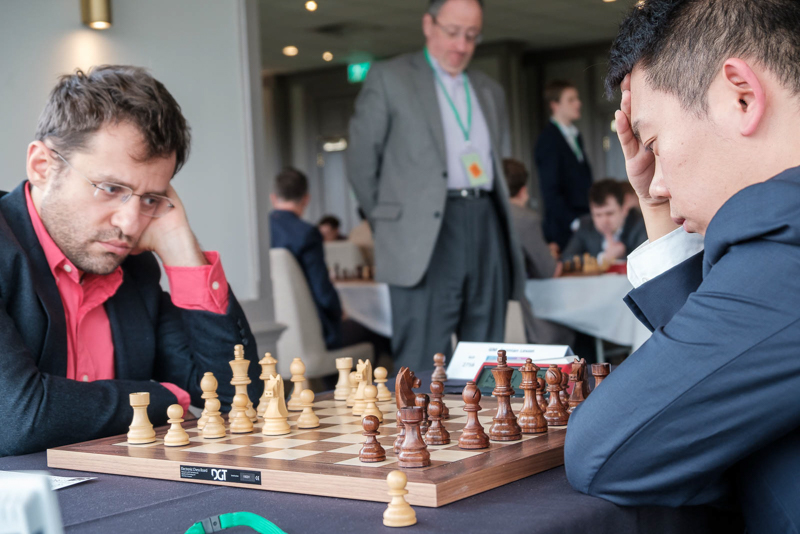 You can replay all the games from the FIDE Chess.com Grand Swiss using the selector below:

After the bloodshed of Round 6 things couldn’t have been more different in Round 7. For decisive action you had to go to the very bottom boards, where the last 9 games were all decisive – the same number as on the top 49 boards of the event combined! The draws didn’t signify a lack of fighting chess, however. Fabiano Caruana voiced the familiar lament, “he does get low on time but his quality of play doesn't drop that much”, after he felt he was always one move short of getting a winning position against Alexander Grischuk. In the end Fabiano had to settle for a draw that leaves him on a mere 2914 performance on the Isle of Man. 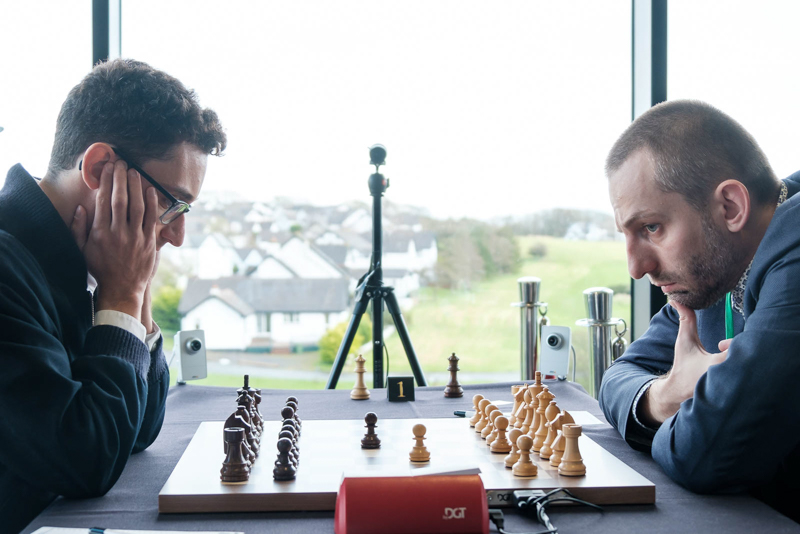 On board 3, Kirill Alekseenko commented “I didn’t want to lose the rating in this game” after he’d gone into it as a new member of the 2700 club. He had White against Magnus Carlsen and when he was surprised by the Najdorf (not the greatest surprise, you would imagine, since Magnus had done the same in his previous game with Black!) Kirill decided to play “a calm line” with 6.Be2.

The game went smoothly for the 22-year-old Russian, though he admitted at one point he almost blundered just when he had a position it seemed impossible to lose:

His original intention here was to play 35.Rc6?? but he spotted in time that it loses to 35…Ra1+! 36.Kh2 h4! and there’s no good defence to Black doubling rooks on the 1st rank and giving mate. 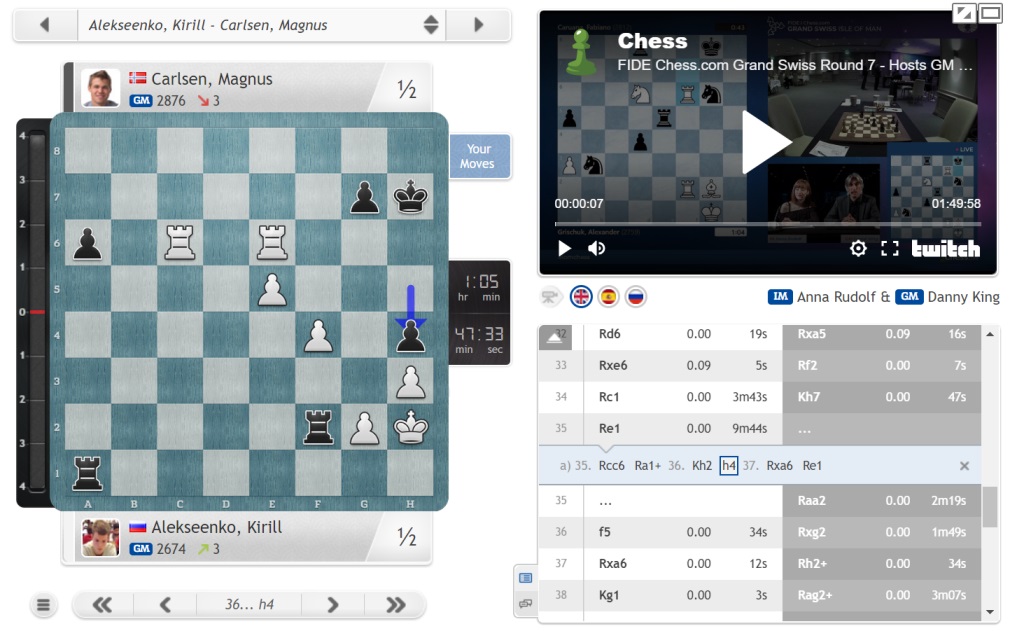 35.Re1! instead safely secured the draw.

Elsewhere Vishy Anand held on a pawn down against Yuriy Kryvoruchko, Boris Gelfand did the same two pawns down against Rinat Jumabayev, and Vladislav Artemiev escaped from what would have been a Candidates hopes ending defeat to Robert Hovhannisyan. It looked as though there would be draws on the first 12 boards, until the ice cracked on board 2. 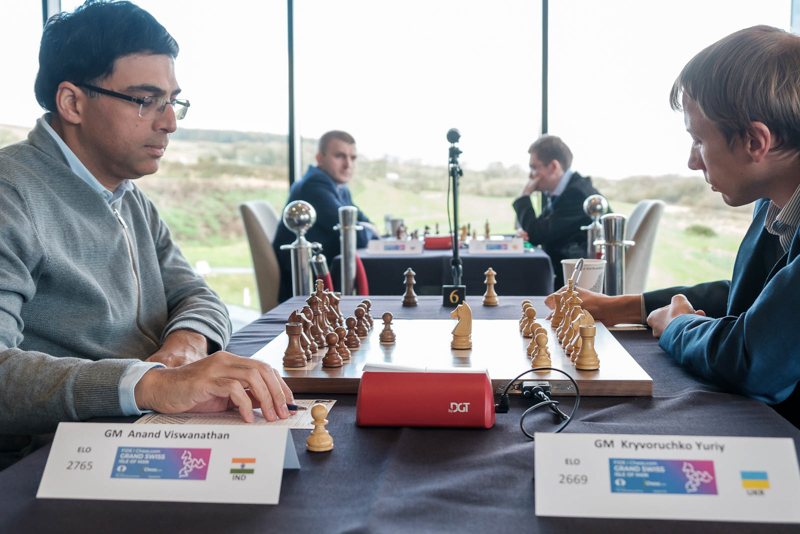 A tough day at the office for Vishy, but he held on to remain within a point of Caruana and Aronian | photo: John Saunders, official website

Levon Aronian was a pawn up by move 14 against Wang Hao, and it remained to be seen if the Chinese player would get sufficient compensation:

The extra pawn was converted into an outside passed pawn and then later traded off for a better pawn structure and better-placed king, but it looked as though the game was merely fizzling out into a draw. On move 54, however, Wang Hao forced matters with 54…f4?! (Levon saw nothing wrong with Black just moving his rook) but after 55.g4 f3 56.Kg5 he missed a vital nuance that could still have saved the game: 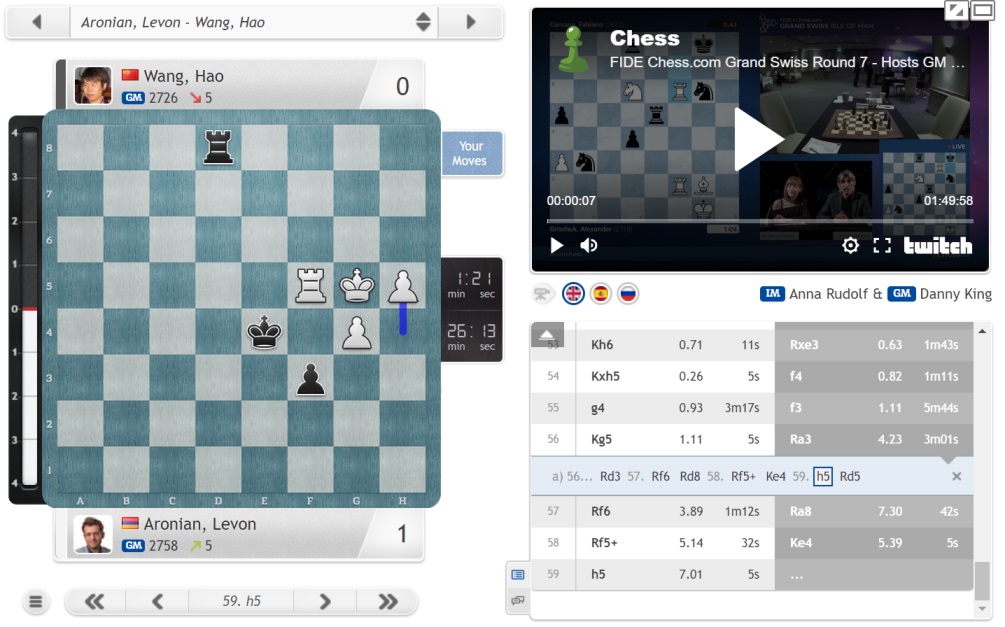 The point is that after Rd3-d8 Black saves himself with 59…Rd5! in the final position - the f-pawn queens and secures a draw.

Levon had also missed that trick, but the victory took him into the joint lead with Fabiano Caruana on 5.5/7. Since Fabiano is already in the 2020 Candidates Tournament that means Levon has the clear lead in the qualifications race with four rounds to go, but he now faces Black against Fabiano in Round 8. “Always good to play against someone I respect… and who forces you to respect him!” said Levon. Meanwhile Wang Hao’s first loss didn’t ease his task – in Round 8 he becomes Magnus Carlsen’s first 2700+ opponent of the event!

The other decisive game on the top 14 boards was Wesley So’s victory over Ganguly, who offered to play the Najdorf just as he had against Carlsen. Wesley opted for 3.Bb5+, accepted an exchange sacrifice from his opponent and emerged victorious after Ganguly failed to find a tricky defensive idea when down to his last 5 minutes against an opponent with an extra 40 minutes on the clock. That game could be significant, since it leaves Wesley in the hunt for Candidates qualification. 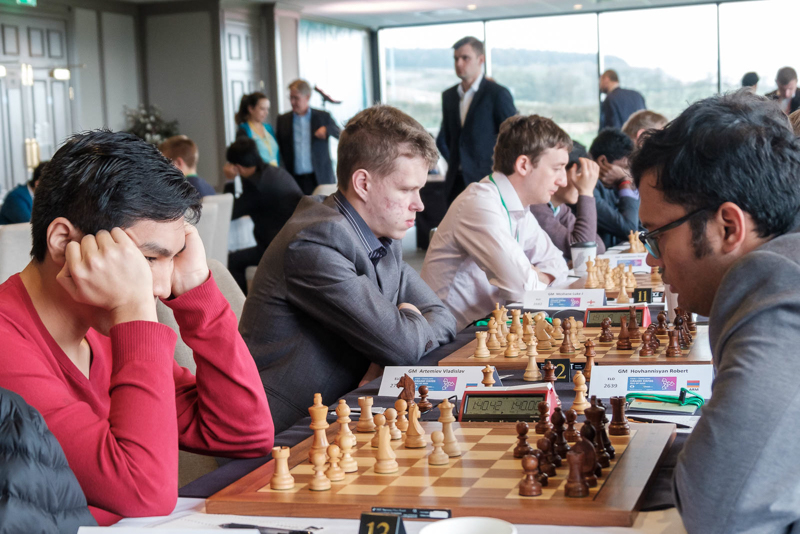 Wesley So took advantage of a slow day to get within touching distance of the leaders | photo: John Saunders, official website

Among the other games we can’t skip over what would be an unremarkable draw for Raunak Sadhwani against Gabriel Sargissian, except that a 7th unbeaten game against top opposition means the 13-year-old Indian prodigy merely needs to play the next two rounds to get his 3rd and final grandmaster norm. 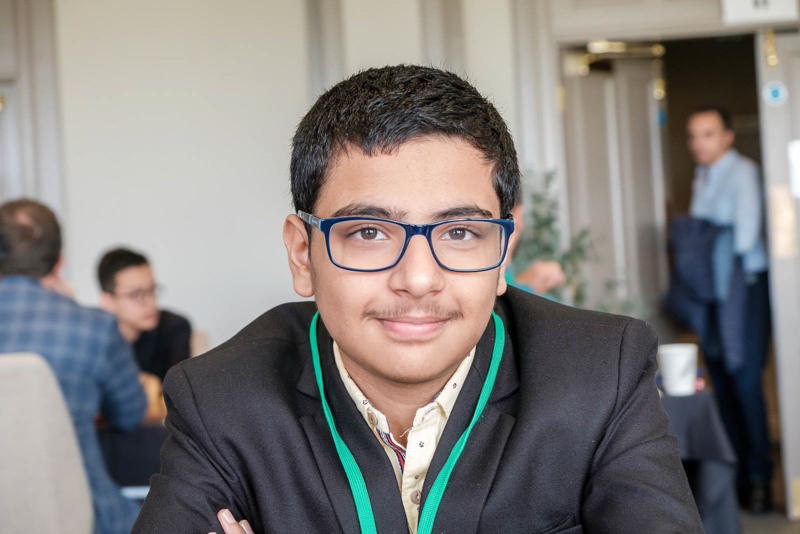 He’s played significantly stronger opposition than Magnus so far, and posted a 2731 performance (Magnus is at 2816): 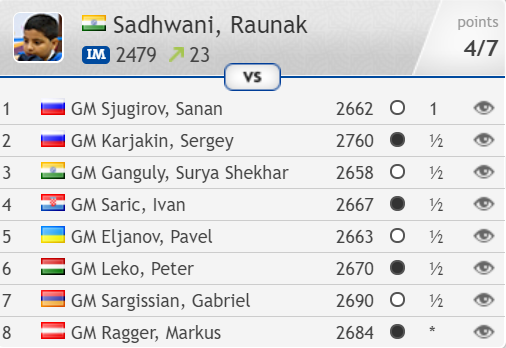 Sadhwani is set to become the 9th youngest grandmaster in history, sandwiched between Wei Yi and Bu Xiangzhi.

With four rounds to go there are 29 players within a point of the lead (and 62 within 1.5 points):

As the tournament enters the decisive stages almost every match-up at the top is intriguing, with the Round 8 pairings beginning: Caruana vs. Aronian, Wang Hao vs. Carlsen, Anton vs. Grischuk, Maghsoodloo vs. Vitiugov, So vs. Alekseenko and Anand vs. Fedoseev. Tune into all the live action here on chess24 from 16:00 CEST! 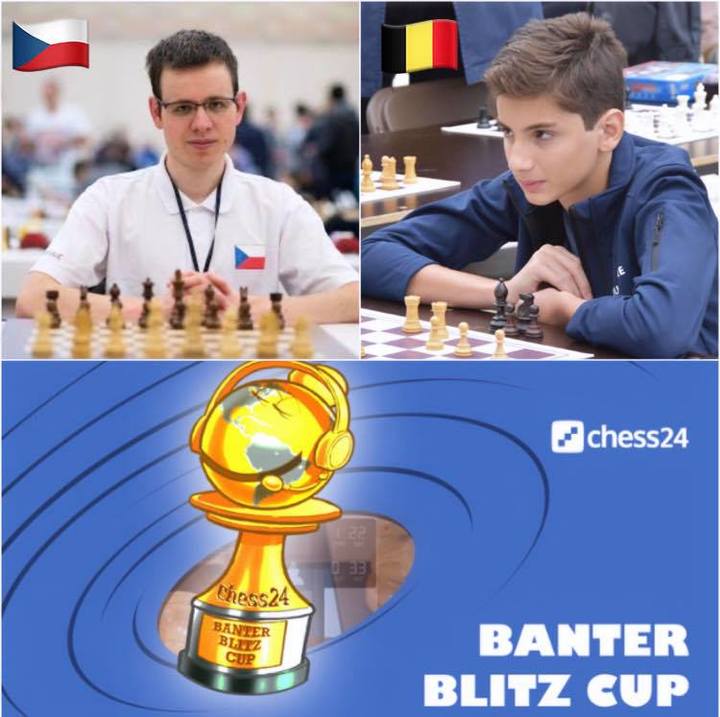 That’s not all, however, as we have two more Banter Blitz Cup encounters on Friday. 14-year-old Belgium IM Daniel Dardha takes on Czech no. 1 David Navara at 20:00 CEST, with both players commentating in English. David needs no introduction, while Daniel was hugely impressive both on the board and streaming during his preliminary match against IM Nikolas Lubbe. Then at 22:00 it’s Poland’s Mateusz Bartel vs. Peru’s Emilio Cordova, with Mateusz commentating in English. You can catch all the matches on our Shows page.