Goryachkina takes the lead with 4 games to go

21-year-old Russian Grandmaster Aleksandra Goryachkina leads the Women’s World Championship match 4.5:3.5 after crashing through against Ju Wenjun in Game 8. That followed a tense 67-move draw in Game 7 where it was reigning Women’s World Champion Ju Wenjun who had all the chances. There are now just four games to go in Vladivostok for the Chinese player to mount a comeback. 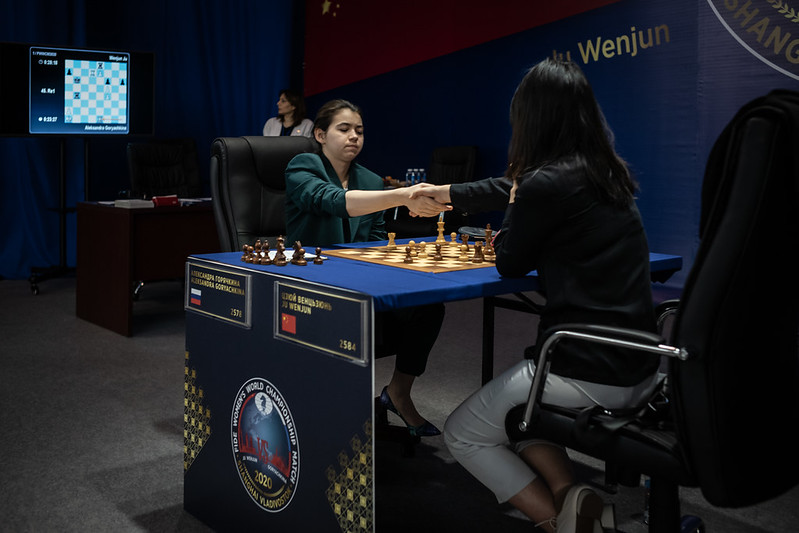 You can watch and replay all the games from the Women’s World Championship match using the selector below:

And here’s the Game 8 commentary where Nigel Short was joined by women’s no. 1 Hou Yifan:

If the switch of the match from Shanghai, China to Vladivostok, Russia was tough for Ju Wenjun she didn’t show it in the first game of the second half of the match. Playing White she once again faced Goryachkina’s Berlin, but this time, after getting into trouble in the final game in Shanghai, she switched to the Anti-Berlin with 4.d3. It proved a good choice, since Ju got the “dream” of a risk-free advantage: 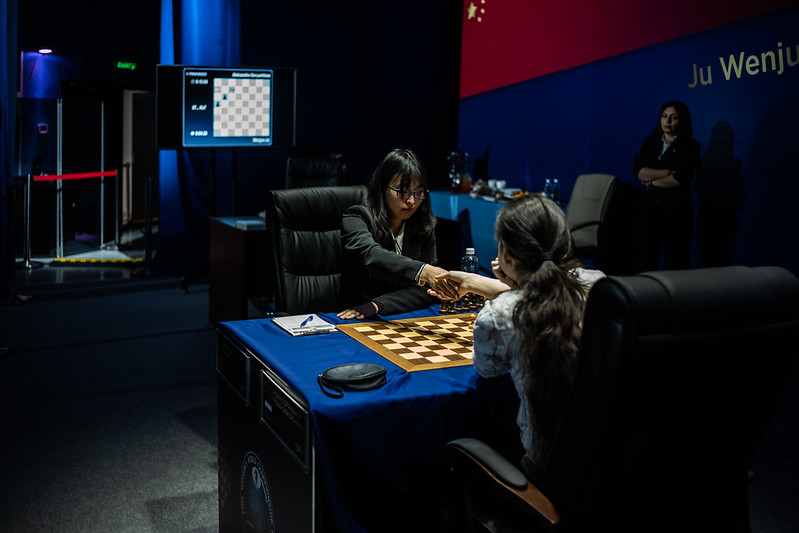 By the end almost all the material had gone from the board | photo: Michael Friedman, official website

As Peter Svidler commented during commentary on Round 6 from Wijk aan Zee:

Goryachkina so far is showing the chess that won her the Candidates – extremely solid, very, very few mistakes and she does appear to be very much in control of pressure. This is obviously by far the most important event of her career and she doesn’t appear in the slightest intimidated by the huge stage and the large stakes. I think it’s been established for a while that she is just a very good player, but Ju Wenjun has a lot more experience playing at such a stage, but so far the difference is not really telling. 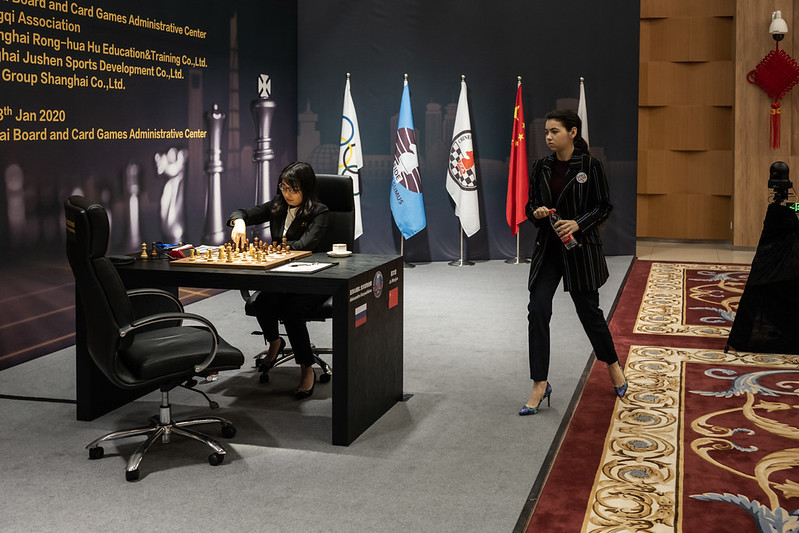 The 8th game of the match got off to a surprising start as Goryachkina reacted to her opponent's sideline of the Queen’s Gambit Declined by going for a move that shocked the watching Nigel Short and Hou Yifan:

9.Bg3!? (rather than 9.Bxe7) seemed to give Black an immediate advantage after 6...Nxg3. She had the bishop pair while White’s structure had been damaged, but when Goryachkina castled queenside it was possible to argue that the half-open h-file was a strength rather than a weakness. 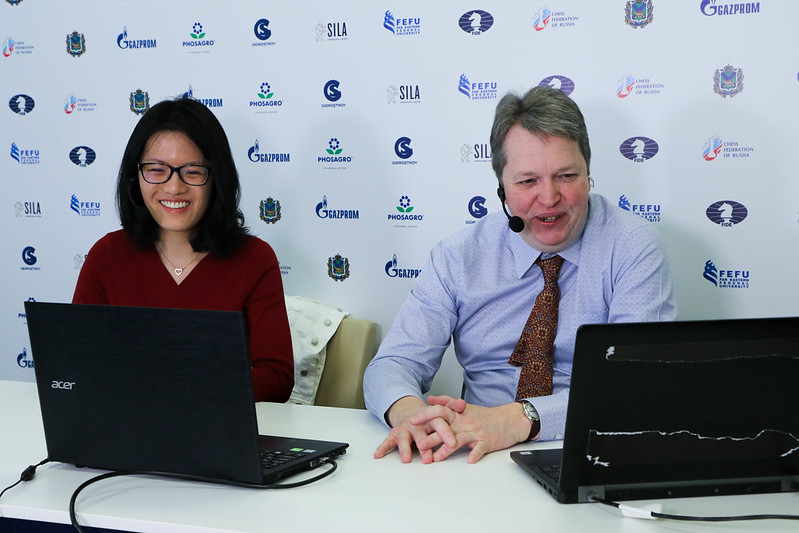 The next key moment came after 16.Nc5:

Aleksandra explained to Sergey Shipov afterwards that 16...Bc8! would have been an absolutely normal move, but instead Ju Wenjun went for 16…Bxc5?!, which the Russian player took as evidence that her opponent wasn’t sure how to handle such structures. There was more evidence for that in the English press conference, where Ju confessed she wasn’t sure what to do after 17.dxc5. Black largely drifted while White made progress until 29…b6?! opened the floodgates:

Here Ju Wenjun played 36…Rb8 and after 37.e6! it really was all over bar the shouting, but 36…Rd7! would have posed far more problems. When Shipov showed this to Goryachkina she explained she was going to play 37.e6?, but remarkably that’s only a draw after 37…d2! 38.Rh1 Rc7! (the move Aleksandra missed after the game) 39.Qf3 (or to some other square) and 39…Qc8!, and suddenly White has nothing better than allowing a draw by perpetual check.

Suddenly it's even White who has to be careful... 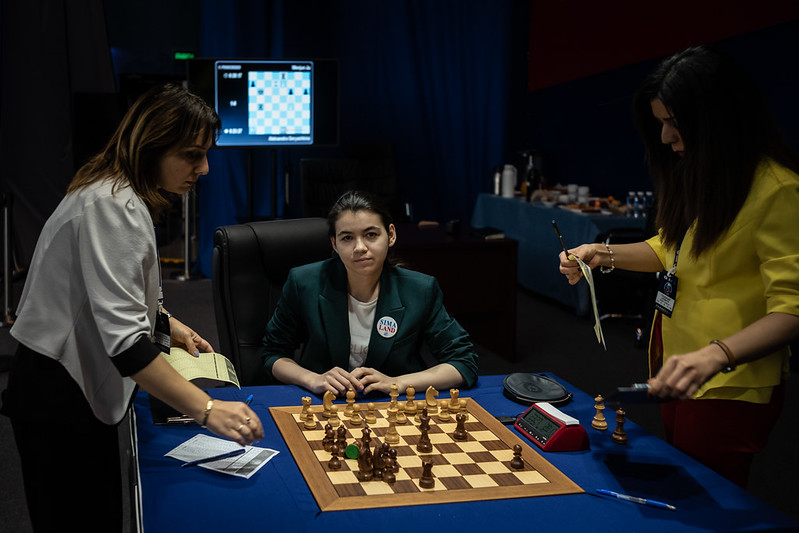 Of course if 36…Rd7 had been played Goryachkina might have spotted those dangers and picked a better move such as 37.Rh1!, but as it was in the game all it took was some care to nurse the position to victory:

That means Ju Wenjun is in the new position of trailing a Women’s World Championship match:

On the other hand, she did need to beat Kateryna Lagno on demand with the black pieces in the final of the knockout Women’s World Championship in 2018, so it would be foolish to write Ju Wenjun off just yet. 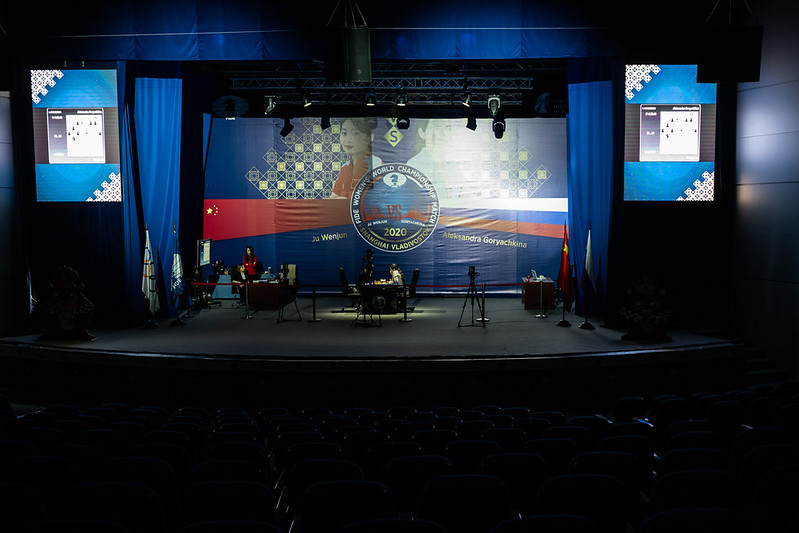 After the first 15 minutes the players compete in an empty hall, since it turns out the organisers were unable to find a one-way screen to allow spectators to watch while the players couldn't see out | photo: Michael Friedman, official website

Game 9 will be on Sunday after Saturday’s rest day. Follow all the action live here on chess24 from the two hours earlier time of 06:30 CET!