20-year-old Aleksandra Goryachkina is destroying the field at the Women’s Candidates Tournament in Kazan. Her 7.5/9, a +6, 2804 rating performance, put her a massive 2.5 points ahead of 2nd placed Kateryna Lagno with just five rounds to go. If she draws those games no-one can catch her, and the 2-time Russian Women's and World Girls' Junior Champion is the only unbeaten player, with wins over everyone but the Muzychuk sisters. It will take a dramatic collapse now to prevent a Ju Wenjun-Goryachkina Women’s World Championship match. 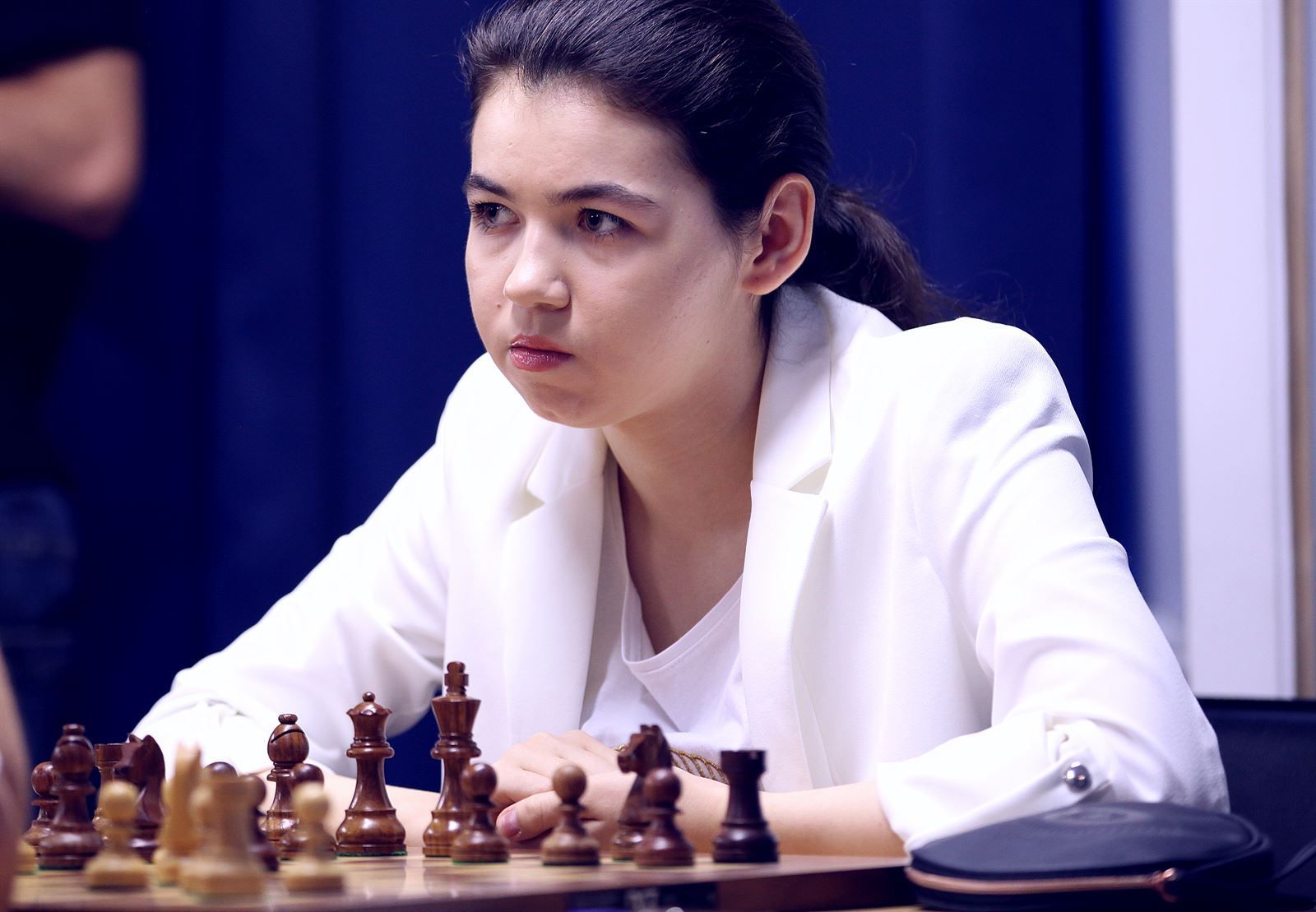 Aleksandra Goryachkina is having the tournament of her life | photo: official website

The 8-player Women’s World Candidates Tournament in Kazan, Russia is arguably the strongest women’s round-robin of all time, and few could have predicted it would be anything other than a close fight. Instead it’s featured one of the all-time great tournament performances, with 5th seed Goryachkina’s 7.5/9 start on a surprise level comparable to Fabian Caruana’s 7-game winning streak in the 2014 Sinquefield Cup: 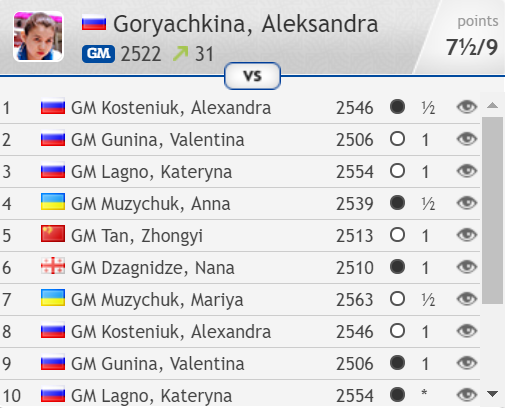 Goryachkina’s six wins have left the others trailing in her wake. If Kateryna Lagno had lost to Alexandra Kosteniuk in Round 9, something that looked very possible at one point, Goryachkina would have been the only player on a plus score in the event. How tough it’s been is visible in players as strong as the Muzychuk sisters starting with -2 after four rounds (they both fought back to 50%) or multiple Russian Champions Alexandra Kosteniuk and Valentina Gunina finding themselves in joint last place: 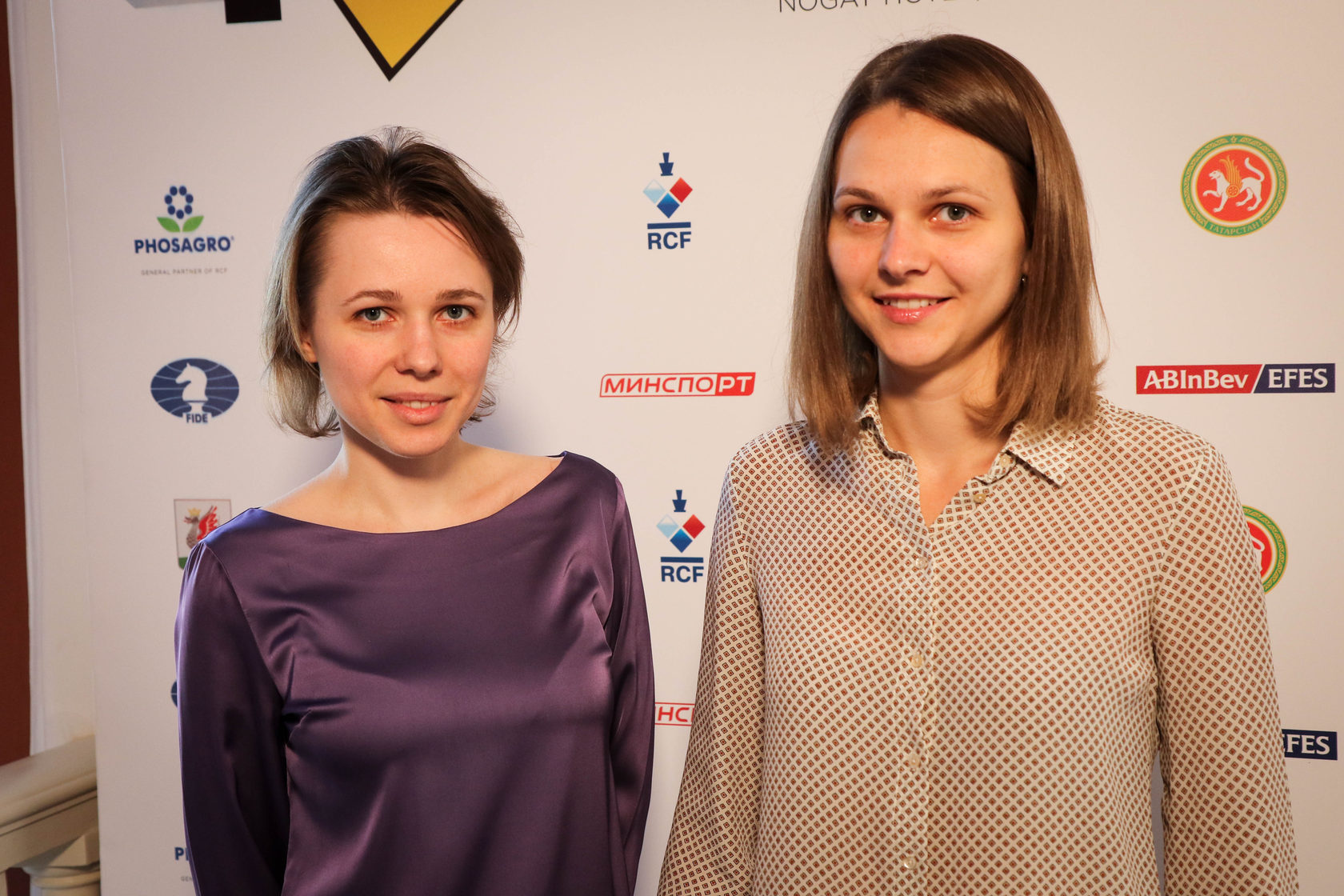 So far only Mariya and Anna Muzychuk have avoided defeat to Goryachkina | photo: official website

Goryachkina’s amazing run has gained her 31.1 rating points, putting her in third place on the women’s live ratings behind only Hou Yifan and Ju Wenjun:

Goryachkina in fact only qualified for the Candidates Tournament as a replacement for women’s world no. 1 Hou Yifan, who is currently studying at Oxford University and chose not to rejoin the women’s cycle this year. She explained to commentator Elisabeth Pähtz (who was required to act as an interpreter since Aleksandra doesn’t speak English) that her last-minute inclusion was the reason she'd already agreed to such a busy schedule this year:

Our chess24 profile of Aleksandra Goryachkina begins, “Goryachkina’s whirlwind progress through the ranks of junior chess makes the young Russian an obvious future World Championship contender”. In 2011 she scored 9/9 in the Girls U14 World Youth Championship and in both 2013 and 2014 she won the Girls U20 World Junior Championship. She won the formidable Russian Women’s Championship as a 16-year-old in 2015 and repeated that feat in 2017. She crossed the 2500 barrier as a 17-year-old in 2016, but after that she took some time to stabilise and turned 20 without having quite hit the heights many had expected of her. 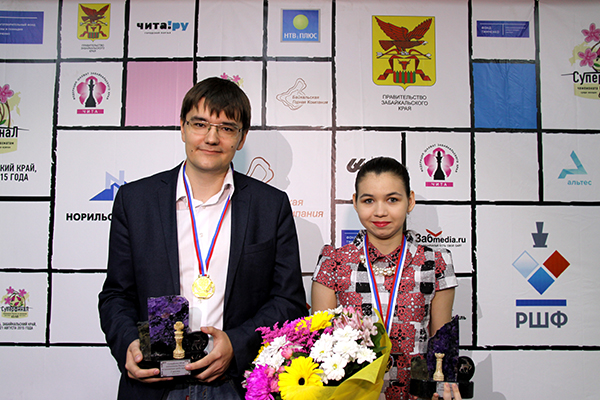 2019 looks to be the moment that changes, with signs visible in some events earlier this year. For instance, she scored 8/9 for the Russian team at the Women’s World Team Championship in Astana: 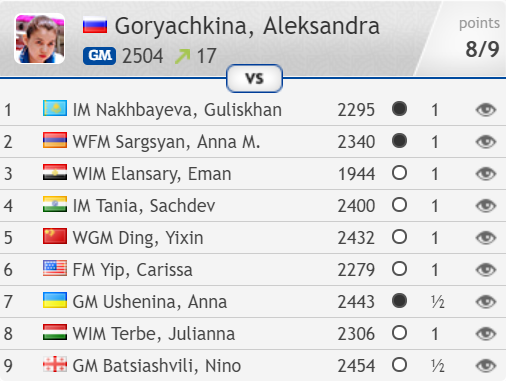 Her 6.5/11 in the European Individual Championship in Skopje included victory over Rauf Mamedov. 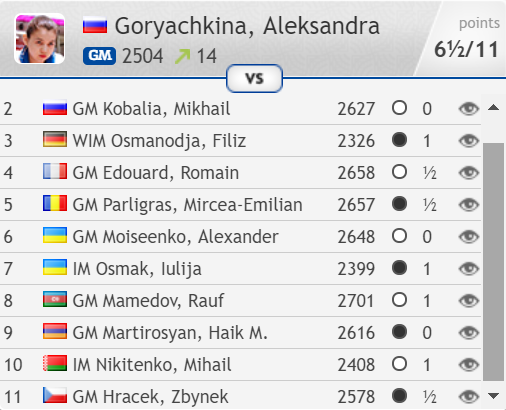 She dropped some rating points in the Women’s Individual Championship, but then also starred for her team in the Higher League of the Russian Team Championship: 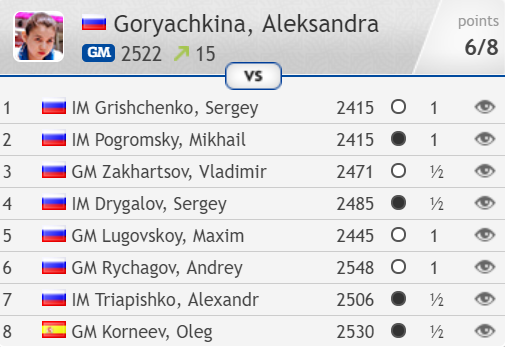 Perhaps all that play against male opposition steeled her for the task ahead in Kazan, and after letting a winning position slip in Round 1 she was the star of Round 2. An enthralling encounter against Valentina Gunina looked as though it might end in a draw until a spark of genius on move 72:

It’s a move that’s easy to understand when you see it - 72…Rxh4 73.Ra4+!, and after rooks are exchanged the h-pawn queens - but first you have to see it! That was a heavy blow for Gunina, and the interview where she was asked about missing the move was the inspiration for an appeal by Ian Nepomniachtchi:

Goryachkina didn’t look back after that, squeezing out an endgame win over Kateryna Lagno in the next round and conceding draws only to Anna and Mariya Muzychuk in the coming rounds. The action moved to a playing hall higher up in the building (fixing the problem with noise from street musicians that Ian Rogers mentions above), and perhaps the key game so far came in Round 6. 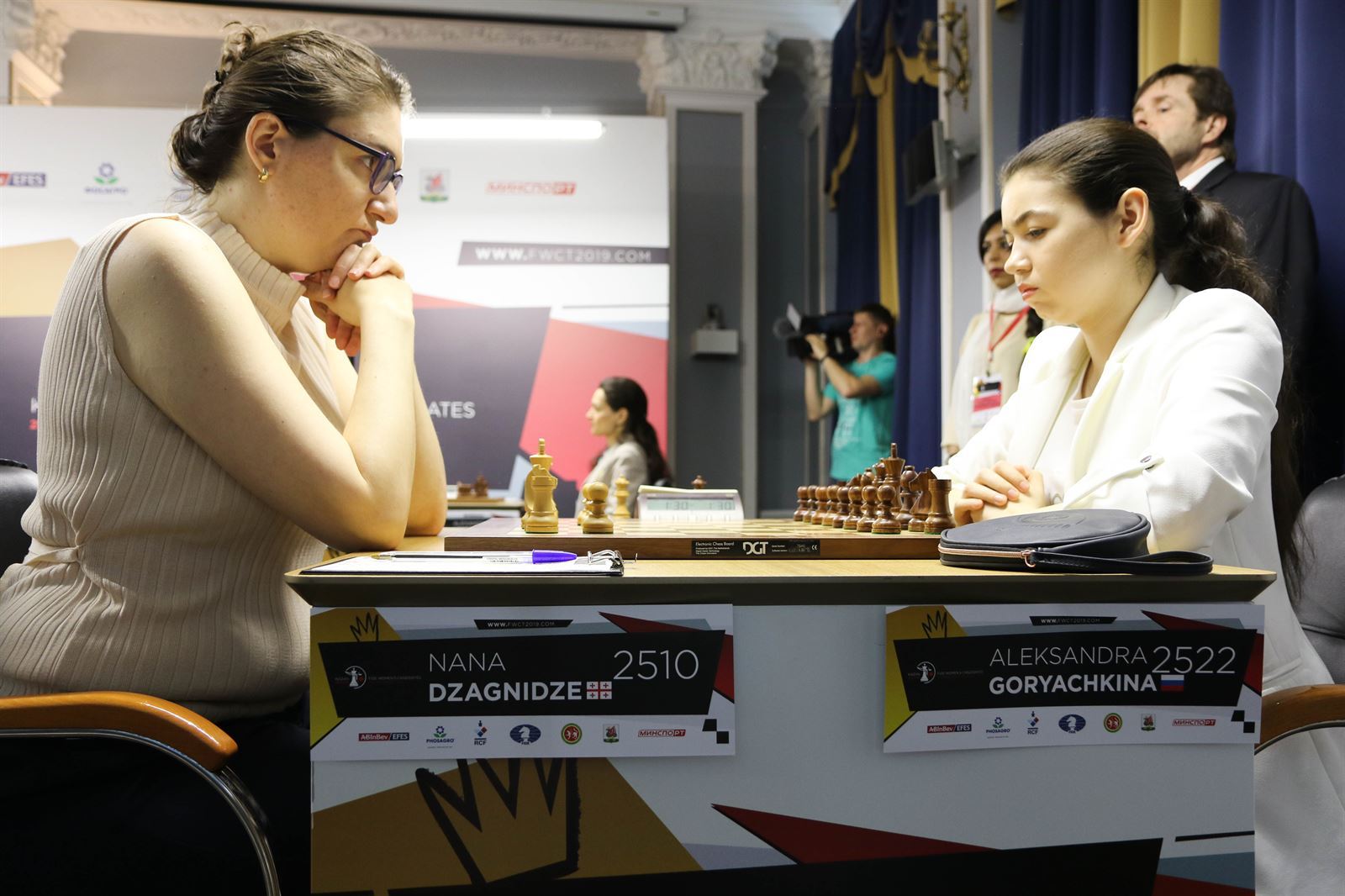 Nana Dzagnidze would have regained the tournament lead with a win, but after missing her chance Goryachkina went on to become unstoppable | photo: official website

Nana Dzagnidze had been the first to take the sole lead with 3.5/4, and although she lost the lead after losing to Kosteniuk in Round 5 she would have regained the lead if she’d beaten Goryachkina in Round 6. That was a possibility, since she was objectively winning before move 48:

Nana quickly defended her g-pawn with 48.Kh3!?, but it turns out only the cold-blooded 48…Qxc6! would have maintained her advantage. 48…Qxg4+ looks incredibly scary, but it’s essentially only one check. In the game the queen would eventually take that pawn via a completely different trajectory, and by that point Black was clearly better:

Goryachkina went on to win, and it’s remarkable that she’s almost never been in danger in the other games, only needing to hold a tricky position a pawn down against Mariya Muzychuk. 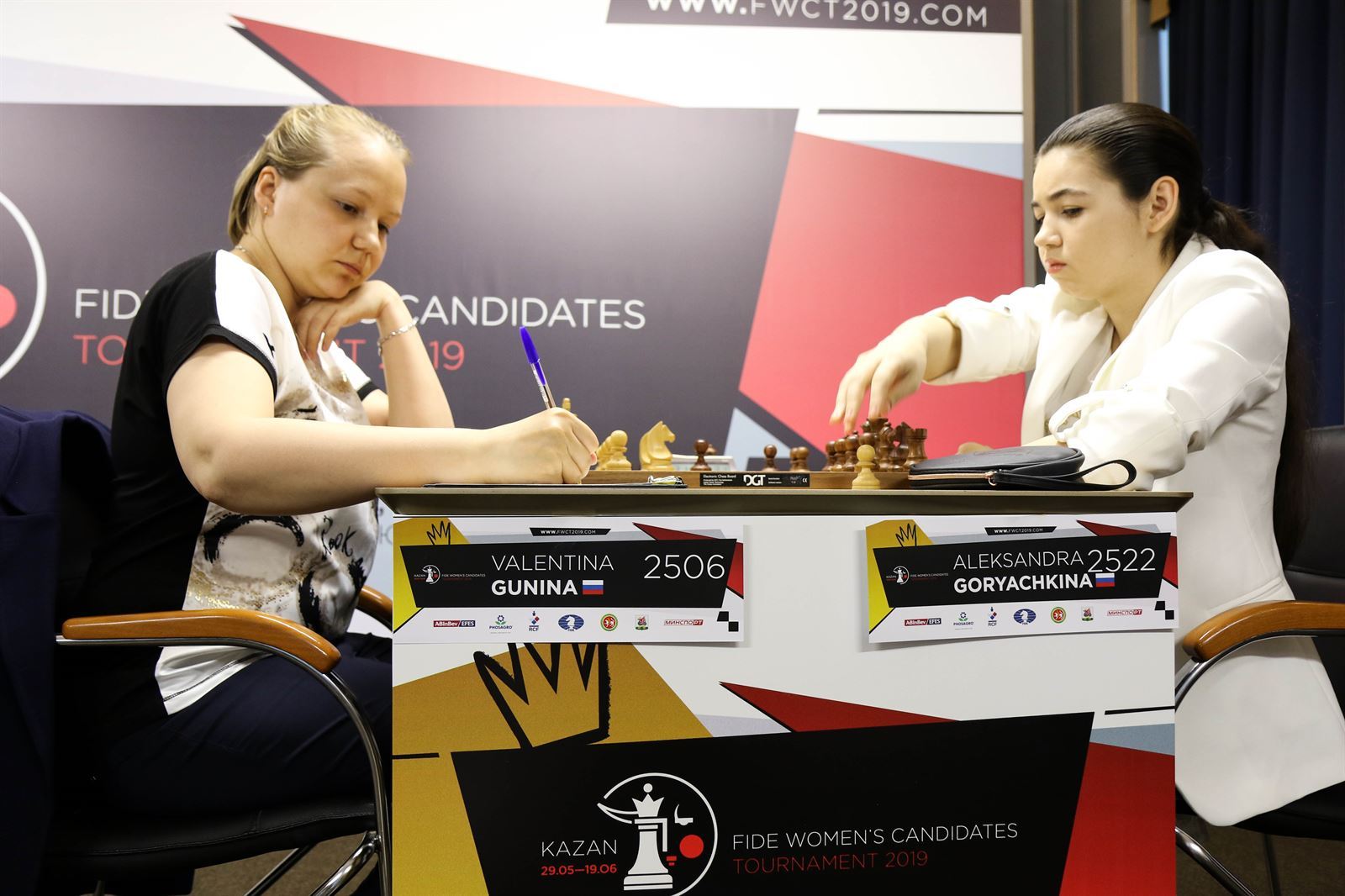 The icing on the cake came in Round 9, when Valentina Gunina went for a trademark display of aggression with 15.b4?! 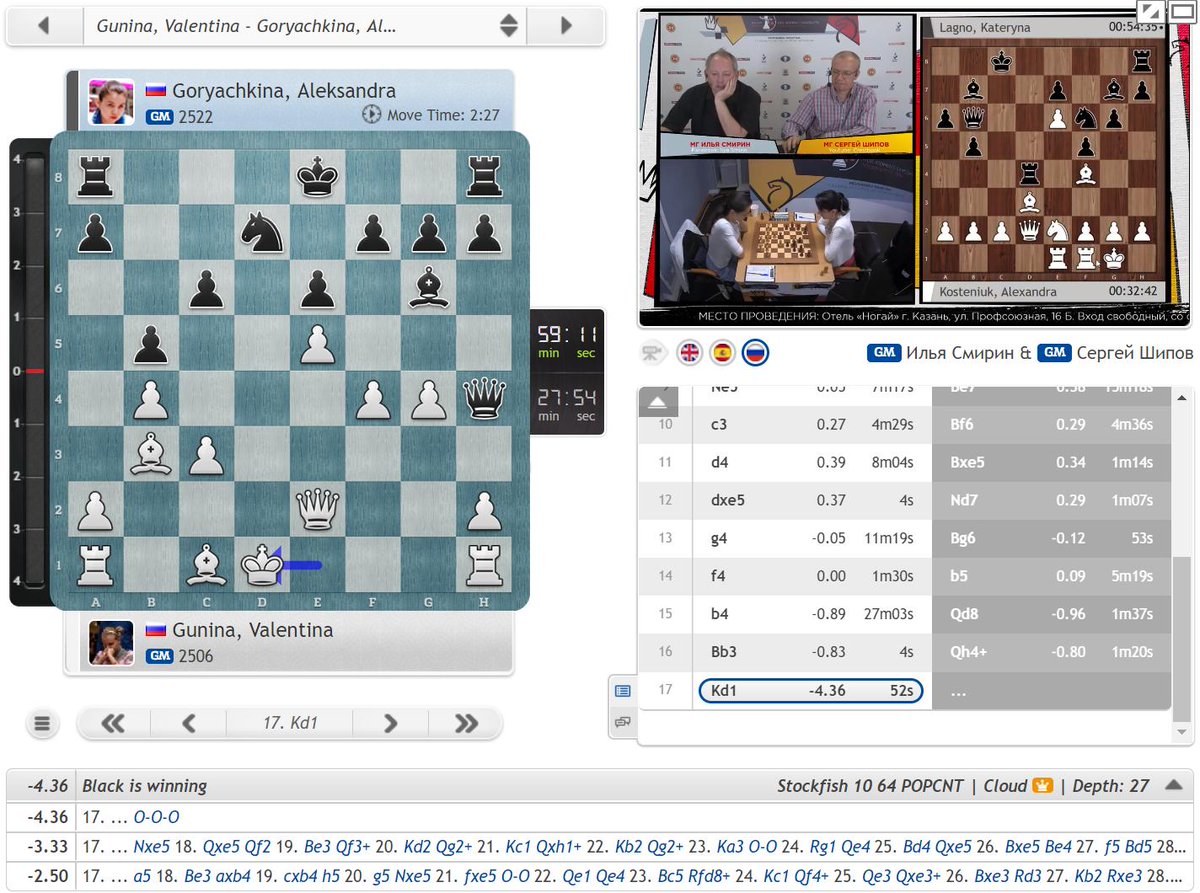 Goryachkina didn’t find the killer, castling long and connecting the rooks, but she went on to win in utterly convincing style after 17…Rd8 was met by a desperate attack from Gunina. 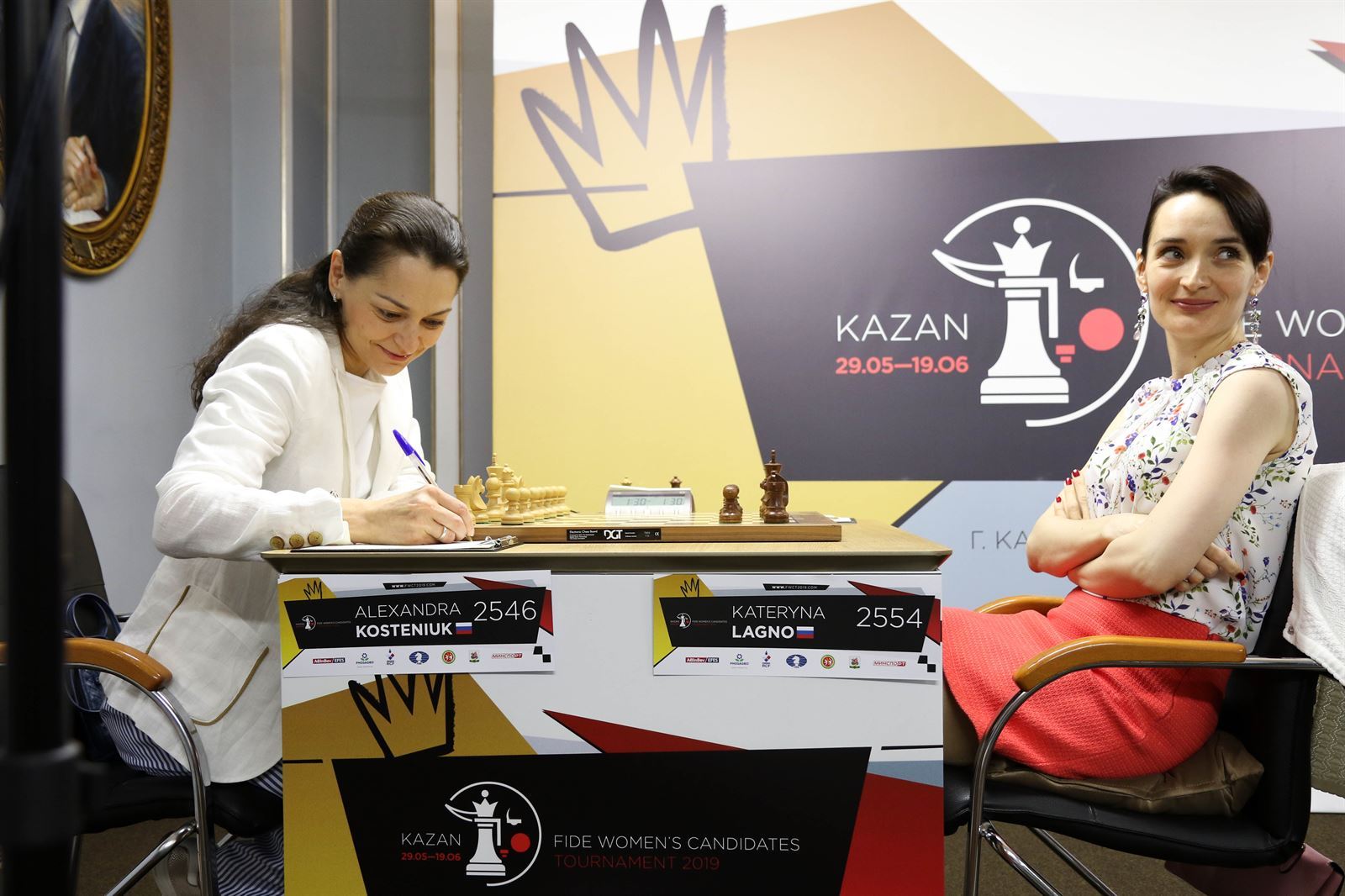 Kateryna Lagno needed to fight heroically against Alexandra Kosteniuk simply to remain within 2.5 points of the leader | photo: official website

So with five rounds to go Goryachkina knows that only a collapse will deny her the title. Will nerves now come into play, with the goal so close? We’ll soon see, with Lagno-Goryachkina in Round 10 the most obvious chance for the rest of the field to catch up. Kateryna Lagno’s coach Vlad Tkachiev has appealed for support for the challenge ahead:

You can replay all the games from the tournament using the selector below:

And of course tune in for the final rounds with commentary from Elisabeth Pähtz and Evgeny Miroshnichenko from 14:00 CEST each day LIVE here on chess24!