Global Championship 5: Wesley So on brink of victory

Wesley So took a 3:1 lead over Nihal Sarin on Day 1 of the Chess.com Global Championship final, meaning he needs just 1.5 points to wrap up victory on Monday. The match hinged on Game 3, where Nihal had a great chance to level the scores but lost his way and stumbled into checkmate. 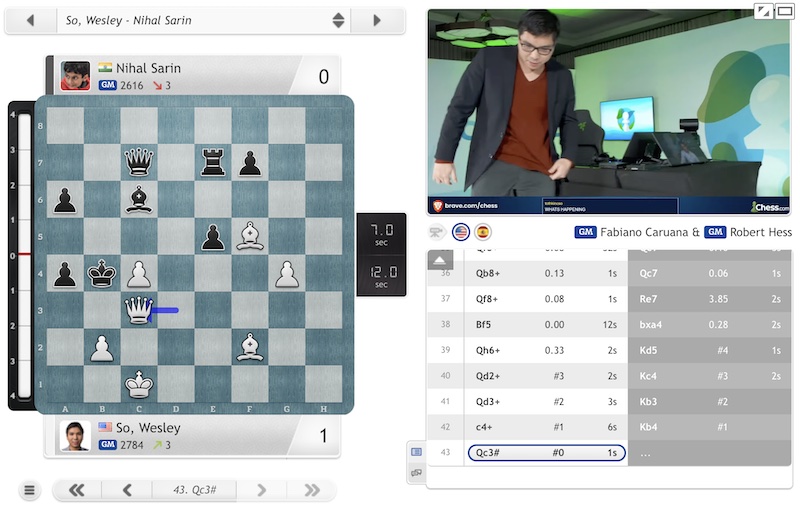 Wesley So is just short of the 4.5/8 score he needs to clinch victory in the Global Championship after a dream start to his final against Nihal Sarin.

Wesley commented on his recent improvement in form:

Obviously at some point you get tired of losing too many games and you want to do better. Hopefully that’s what’s happening to me right now.

The first game set the tone for the match, with Nihal Sarin’s attempt to play solidly with the Petroff Defence backfiring. When he spent almost half of his time on the weakening 15…f6!? it was clear he was uncomfortable.

Wesley withdrew his bishop to g3, where it would have a crucial role in what followed. 22.a4!? was a move that turned out to have a very concrete plan. Nihal could have stabilised with 22…Rd7!, but after 22…a6 he was hit by 23.Nh4!

The point is that 23…Qxh5? runs into 24.c5 and the knight on c7 falls. Without a4, Black could have taken on c4 and then after c5 would have the b5-square for his knight.

Nihal Sarin had lost the first game with Black against Anish Giri on both days of his semi-final and then stormed back to win with White, but Wesley wasn’t in the mood to allow that to happen. In fact when Nihal went for a sharp tactical solution to his positional problems it only led him into trouble.

At the end Wesley decided to take a draw.

That was a questionable decision, since after a move like 23…Na3 he should have been able to play against Nihal’s isolated d5-pawn with very little risk. That no harm was done to his tournament chances rested on the dramatic 3rd game of the match.

After getting into trouble in Game 1 while playing a solid opening, Nihal returned to playing offbeat lines, meeting 1.e4 with 1…g6!? Wesley commented:

First of all, I didn’t expect him to play the Modern Defence, I thought he would repeat the Petroff, but he played a similar line against Anish and I guess he wanted to unbalance the game. When he played g6 I had a variety of lines to choose from, but they’re all very murky, so then I just decided to follow the line that I made for the Chessable course two years ago. This line is very complex, White castles long, and I played a lot of blitz games in this, but I haven’t reviewed it and we have to get an unclear position no matter what.

Fabiano Caruana was among the commentators shocked by taking such an approach against as dangerous a player as Wesley So.

Up to a point, however, it has to be said that it was a successful roll of the dice. On move 15, in a position where he was dominating after normal moves, Wesley went for 15.h5!?

After 15…Nxh5, calling his bluff, he felt he had to follow up with the exchange sacrifice 16.Rxh5!? Wesley said he later regretted his decision, but at the time he reasoned:

When he took on h5 I just realised I had to sac the exchange. I wasn’t sure what was exactly going on, but it looked fun.

Although the exchange sacrifice was by no means White’s best option, it was still playable, at least until Wesley went for 21.Bd4?

Nihal found all these accurate moves, e5, d5, Rd7, he found all the computer moves five moves in a row, and I was reeling at that point. I was also down on time, so that was really a critical moment of the match, because he was winning. It’s not an easy win, but he was definitely winning. If I made one more mistake the game would be over, so I was just trying to make use of all the chances that could arise, try to never give up.

The best example of just trying to keep the game alive was perhaps 28.Kc1, played after Wesley’s last long think of the game.

It turns out 28…e4! was still very good for Black, but White’s covering the d1-square and getting out of potential checks from d3 or e4 put the pressure on Nihal to find a good move in a very tricky position. Black can easily get checkmated. For instance, 28…Rg6?? loses instantly to 29.Qh8+ and checkmate next move, but 28…a5? also runs into 29.Bxb5! and the threat of mate on e7.

Low on time, however, logic goes out the window, and with one second on his clock Nihal made his first losing move of the game.

37…Qe7 would have offered Wesley the chance to repeat moves once more with 38.Qb8+ and take a draw, but it seems Nihal had failed to adapt to the new position on the board. He "played for a win" with 37…Re7?, when it turns out 38.b4!, threatening Bc5+, wins for White.

Nihal had the white pieces in the final game of the day, but it seems he had as little idea as most grandmasters of how to get an advantage against Wesley So. He played an early b3 and then made it a double fianchetto with 12.g3.

It didn’t look convincing, and indeed on move 22 the game was abruptly agreed drawn, leaving Wesley with a 3:1 lead after Day 1, just as he’d had in the quarterfinals against Dmitry Andreikin. Back then he needed just two games to wrap up match victory, but he’s got nothing against taking three games…