Nakamura-So and Giri-Sarin are locked at 2:2 going into Day 2 of the Chess.com Global Championship semi-finals. Hikaru and Wesley drew all four games, but not without real chances, especially in the 134-move Game 3. Anish Giri took the lead against Nihal Sarin but the young Indian hit straight back and missed a wonderful chance to take the lead himself. 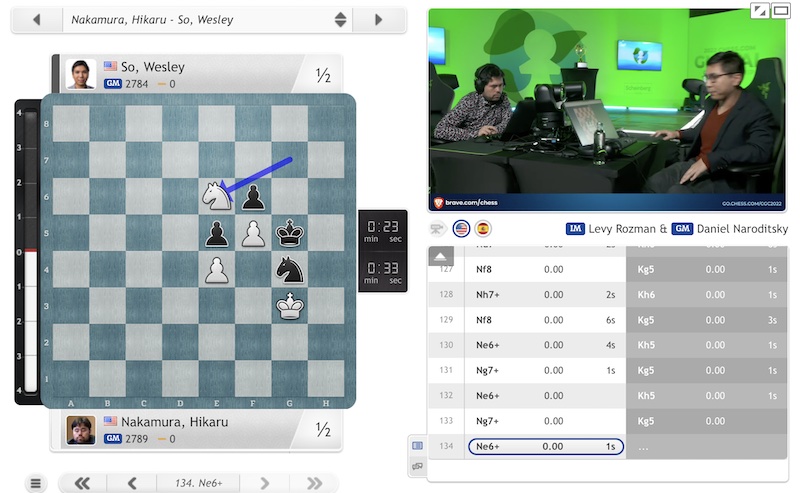 The winners of the Global Championship semi-finals are guaranteed at least $100,000, so that tension was inevitable as the matches began.

US rivals Hikaru Nakamura and Wesley So have made a habit of making quick draws against each other, but although the first three games all featured the same line of the Berlin Defence there were no lifeless draws this time. Wesley had complete control in Game 1.

Fabiano Caruana waxed lyrical on the official broadcast about how this was the perfect position for Wesley to do what he likes most in chess — press for a win at no risk to himself. Here and later the computer was recommending Rg6, partly, it seems, to avoid what happened in the game, where rooks were exchanged on d6, bishops on e6, and the position fizzled out into a draw.

Hikaru then had a clear edge with Black in the next game, but again he couldn’t find the precise path to apply pressure. Fabiano described the match as a “train that’s picking up speed”.

Game 3 at first seemed set just to fizzle out into an early draw, but instead it would become a 134-move epic. The first hint of that was when 37…c6? could have been a fatal mistake by Wesley.

He played 37…c6? without really thinking, and now I instantly played 37.Kc2?, and as soon as I played Kc2 I realised, wait a second, there’s Nf5+ check here, which would have been very strong.

The white rook breaks through into the black position and White is close to winning.

Instead in the game it felt as though Wesley should hold easily, but his 42…g5?! led to a completely unnecessary weakening of his pawn structure. Hikaru did everything right when it came to applying long-term pressure, but then failed to follow through correctly when he got winning chances. In the end, Wesley survived in 134 moves.

The final game of the day saw So switch to the Italian with 3.Bc4 and get a long-term edge. Hikaru gave up an exchange for a not entirely convincing fortress, but in the end it proved to be enough — in fact it was Wesley who looked in some danger at the end before Hikaru, very low on time, decided to force a draw. The 2:2 score was a fair reflection of the day’s play.

2:2 was also fair in Anish Giri’s match with Nihal Sarin, but here blood was spilled. Anish got the advantage right out of the opening in Game 1, with his pawn on e6 definitely proving a strength rather than a weakness.

In this case there was no way for Nihal to calculate his way out of trouble.

The 18-year-old Indian shrugged off going behind in the match, however, to win just as convincingly with the white pieces in Game 2.

The match was quite interesting, because the first two games were of a very high quality by the white player. First game I played very well, I think, and he got in a bad position after the opening. The 2nd game I got into trouble with the black pieces and he converted it very well as well, so it seemed like it might become a match of some good chess, finally... but obviously not!

That allowed Anish to win the pawn back with 20.Rxe7 and go on to make a draw. Anish had been worried:

After Game 2 I was slightly concerned that maybe he’s flawless when he gets a better position, but it seems that luckily he’s just like all of us humans, and things just get completely out of hand.

The final game was wild, with chances for both sides. Nihal Sarin won a pawn and could have converted, most clearly on move 48.

Instead after 48.Nb4 Anish managed to pull off what he called “a very nice cheapo” and win a piece, but he said he struggled to switch his mindset to playing for a win.

Here moving the king backwards retains a winning position, but after 60…Ne6? Nihal threatened to eliminate the last black pawn with 61.f4! Nd4 62.f5!. Anish was only able to hold onto the pawn at the cost of his piece with 62…Nxf5 63.exf5 g5, but that just left a trivially drawn pawn endgame.

So things couldn’t be tighter going into the last day of the semi-finals when up to four rapid games will be followed, if needed, by a single Armageddon game.

The Chess.com Global Championship Finals continues on Friday at 17:00 CET and you can watch here on chess24.