Anish Giri beat Dmitry Jakovenko in the final round to win the 2019 Shenzhen Masters, a result that some claim is his first ever supertournament victory. World Champion Magnus Carlsen, who had called the 2754 average rating event “a bit of a soft supertournament”, offered his “quite insincere congratulations”. Harikrishna, in many ways the hero of the event after featuring in 8 of the 11 decisive games, lost to Ding Liren in the final round, but still finished 2nd ahead of the Chinese no. 1. 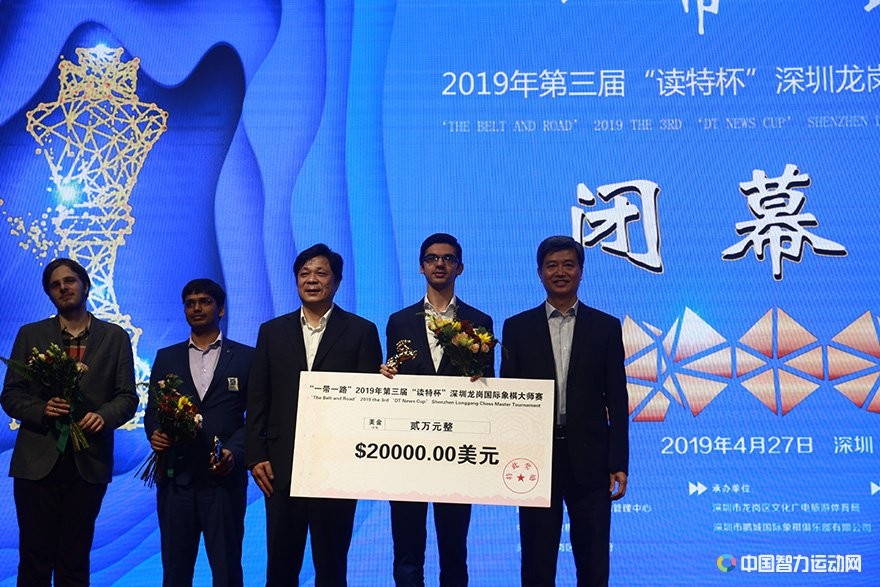 You can replay all the games from the 2019 Shenzhen Masters using the selector below:

With the GRENKE Chess Classic taking centre stage we last reported on the Shenzhen Masters in China after Round 2, when Anish Giri had opened the scoring with a win over Harikrishna. Little did we suspect at the time, but for the next four rounds it was going to be all about Hari!

Harikrishna goes on a streak

In Round 3 the big Ding Liren-Giri clash ended in picturesque deadlock:

That encounter somewhat overshadowed Harikrishna bouncing back by fashioning a win against Richard Rapport from a queen ending with equal pawns. That was to be just the start of a phenomenal run for Hari, who in the next round squeezed out a win in a minor piece ending against the famously tough to beat Ding Liren. Next to fall was Yu Yangyi, who missed a chance to draw as late as move 72, and then it was the turn of Dmitry Jakovenko:

With 29.Nb8! f6 30.c6! Hari again fashioned a win out of the most limited of resources. The run was beginning to look like Fabiano Caruana’s streak in St. Louis in 2014…

…and in Round 7 Anish Giri almost shared the common fate:

This time the prey escaped with a draw, however, meaning that Anish, who had scored a 102-move win over Yu Yangyi in Round 6, was just half a point behind with the better tiebreak of having won their individual mini-match.

In Round 8 Harikrishna was himself ground down in a tricky ending by Rapport, so that the players were tied – and Magnus admitted he was “extremely worried” about Giri’s chances of winning the event. 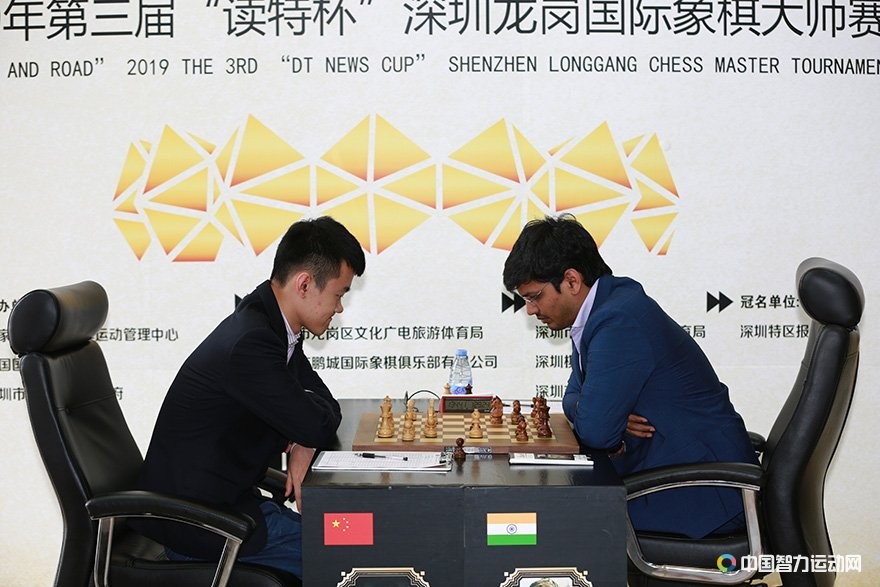 Ding Liren would take revenge on Harikrishna in the final round | photo: cca.imsa.cn

Hari played in 8 of the 11 decisive games of the tournament, however, and hit back to defeat Yu Yangyi again and take a half-point lead over Giri into the final round. The problem for the Indian star was that he was facing Ding Liren with the black pieces, and it seems the Chinese no. 1 had revenge on his mind. An extraordinary game followed, where Hari’s king fled from danger all the way to g1:

Computers give this weird and wonderful position as level, but after 58.Kc4 Rd7 59.Rh5 Hari missed the chance to draw with 59…Nxe3+! and eventually went on to lose as Ding created unstoppable passed b and d-pawns. It had almost been Hari’s first supertournament victory: 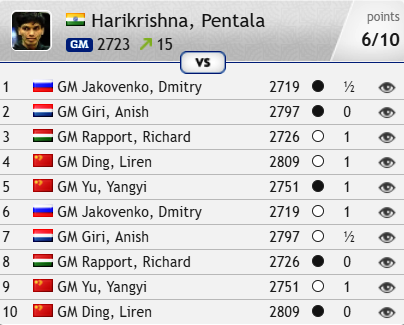 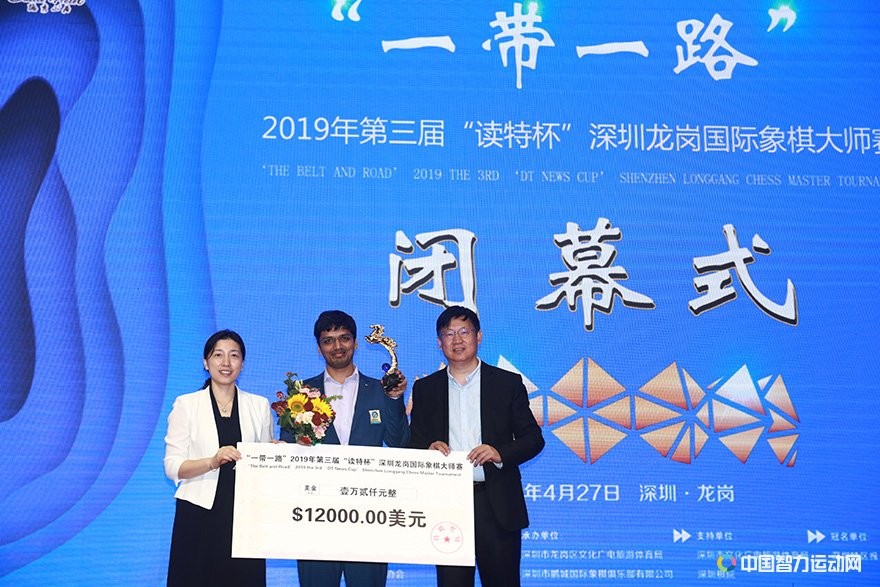 Giri gets “monkey off his back” 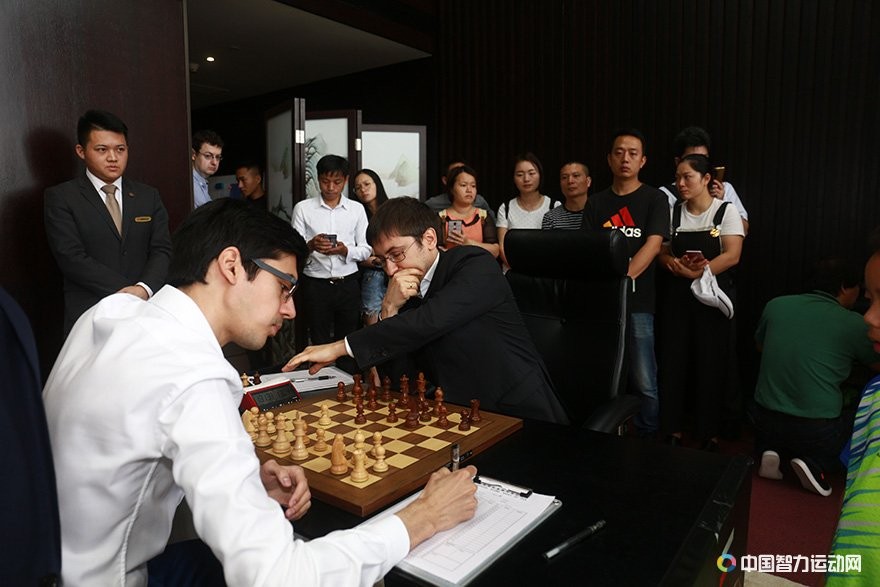 Anish Giri would finally seal victory with a win over Dmitry Jakovenko in the last round | photo: cca.imsa.cn

In the end even a draw wouldn’t have been enough for Hari, since Giri played the final game perfectly. First he used the fog of war, or at least some sauna steam, to lead his opponent astray:

Then he gained a grip in the opening, won a pawn on move 35, and nursed that edge for another 62 moves until Jakovenko finally resigned. After a winless -3 in Shamkir, Giri had scored an unbeaten +3 in Shenzhen! 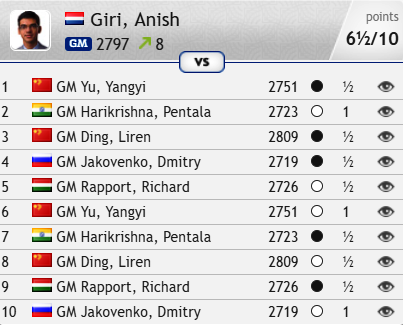 Much more than that, of course, he’d finally shaken the accusation of not winning any supertournaments, even if that claim has always rested on the somewhat ludicrous suggestion that Reggio Emilia 2011/2, featuring three of the Top 10 and some half-decent up-and-coming stars like Fabiano Caruana and himself, wasn’t a supertournament:

Some had even voted against considering Shenzhen a supertournament…

…but Magnus himself conceded in Baden-Baden that the “supertournament” label was appropriate:

It is a bit of a soft supertournament, but still it is, I think. I mean, Ding is there, and he’s world no. 3… I don’t know how the tiebreaks are like and such. I’m really nervous for that one tomorrow, and I’m nothing if not petty!

Magnus told Jan after Round 8 in Baden-Baden:

I would like to offer my quite insincere congratulations to Anish for his win. It was an exciting last round. Now he’s got this monkey off his back, so we’ll see what happens in the future, but yeah, it’s a bit of a mixed feeling, to be honest!

Jan himself joined in the “praise”, reusing one of the best trashtalking tweets of 2018 (posted by Peter Heine Nielsen after the Berlin Candidates):

The claim of Shenzhen being a “soft” supertournament could of course be countered by pointing out that the average rating in Shenzhen was  2754, 30 points higher than the 2724 of the GRENKE Chess Classic:

In any case, the congratulations poured in!

These are the final standings (you can click on any game to open it with computer analysis): 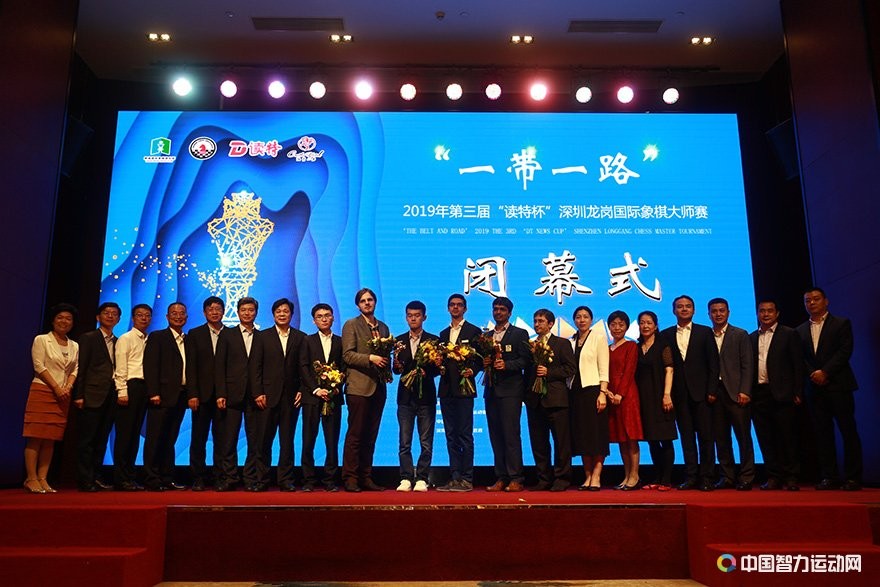 A final photo from the 2019 Shenzhen Masters | photo: cca.imsa.cn