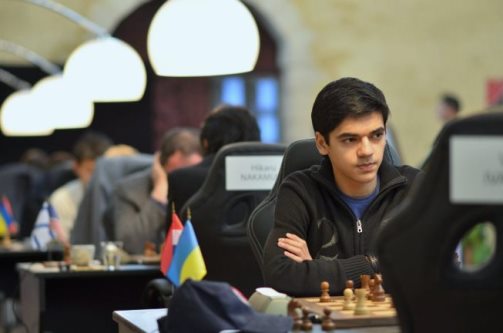 Dutch teen Anish Giri is the final player in the 10-player line-up for next month’s Norway Chess supertournament. His name was revealed during a press conference in Oslo today featuring Magnus Carlsen, who described Giri as a player “with an annoying tendency to beat me”. The World Champion also fielded questions on his upcoming match, noting “it’s still Anand who has something to prove”.

While Simen Agdestein, currently rated 2625, reduces the average rating to “only” 2774, the average for the top 6 players in the event is an impressive 2805!

As in last year’s tournament, the world’s best players will be fighting for a 1st prize of 100,000 Euro, with the tournament’s total budget close to 1 million Euro. 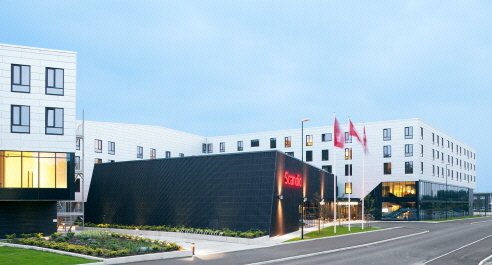 What immediately caught your attention during the press conference was the tournament’s new logo:

The new official sponsor of the event is Unibet, an online gambling company based in Malta. The problem is that any advertising for gambling sites other than the state-owned Norsk Tipping is illegal in Norway, but the company still wanted to sponsor the event.

When Carlsen played against Anand in the World Championship match we noticed great interest in chess. This is something our customers want, so it’s natural for us to contribute to such an event.

Although the colours and the font are the same as Unibet’s official logo, the sponsor and organisers can’t actually use the name of their sponsor in the logo. They solved the problem by using the text “NO LOGO” in the name of the event.


As chess24 noted two weeks ago, Agdestein won the right to take part in the supertournament after defeating his compatriot and former student Jon Ludvig Hammer 3.5-1.5 in a televised rapid match.

Knowing the amount of preparation needed in order to be able to challenge the world’s top players, Agdestein was uncertain whether to accept the invitation. However, on the final day of TV2’s Shamkir Chess studio broadcast he seemed to have made up his mind:

I think I will accept the invitation. I had my doubts, but it’ll be fun to test myself. I don’t like losing chess games and I’m so old that I don’t have any respect for Caruana and other 21-year-olds. Caruana and Magnus are human, so I’m not afraid (smiles).

Hammer, on the other hand, will be happy to join national TV channel TV2’s commentary team for the event.

Magnus Carlsen attended the press conference along with the Norway Chess organisers, his manager Espen Agdestein and the President of the Norwegian Chess Federation Jøran Aulin-Jansson. 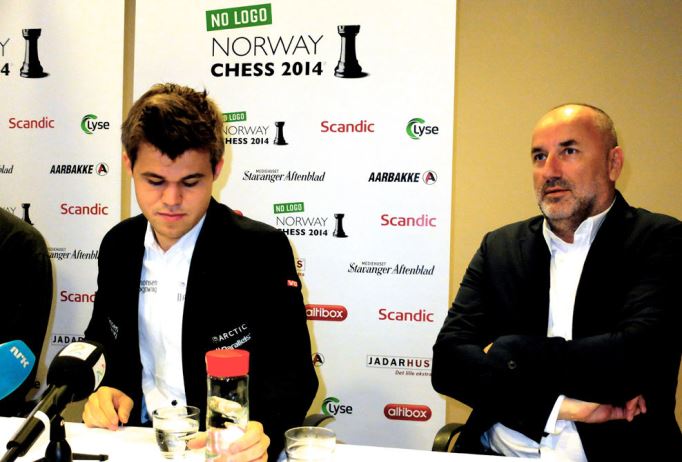 The World Champion said he didn’t know who the 10th player would be and then, during an interview shown live on TV2’s sports channel, he jokingly commented:

I’m a bit disappointed. Well, Giri is a good player and a nice guy, but he also has an annoying tendency to beat me and not respect my authority. So that I don’t like!

He’s a good player. He’s well-prepared and the fact that he doesn’t have any respect for authority is an advantage for him. His self-confidence is high, sometimes rightly so, sometimes not. I really want to beat him, as I’ve never beaten him in classical chess. I haven’t faced him many times either, but he’s clearly one I want to beat.

Both Nakamura and Anand turned down their invitations, and Carlsen got the chance to comment on that as well:


Nakamura probably had his reasons not to play this event.

Carlsen: “It would be great to play the match in Norway”

Norwegian journalists were understandably also interested in Carlsen’s opinion on Anand – his absence from Norway Chess, performance in the Candidates and the latest developments in the bidding “war” for the World Championship match. 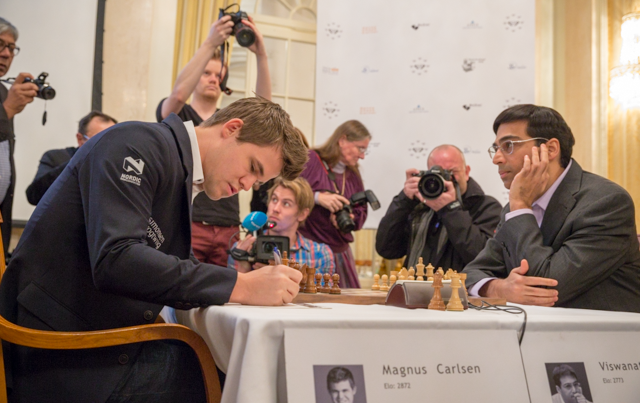 During the press conference Carlsen commented:

I can’t imagine facing him before the World Championship match. It’s fine with me that his last memories from our games are the ones from Zurich. It could have been a positive experience for him, but it’s more likely that it would have been a negative one.

Asked about Anand’s performance in the Candidates, Carlsen told Dagbladet.no:

To put it arrogantly, he didn’t face me in the Candidates. It’s still Anand who has something to prove.

There were several questions related to a possible bid from Norway, which has not entirely been ruled out yet depending on what FIDE decides. Asked about the possibility of playing a World Championship match in his own country, Carlsen said:

I’d like to see a Norwegian organiser. I hope it will be sorted out soon, but right now my focus is on other things. Having the match take place in Norway has its advantages, though.

Asked by VG.no whether he thought FIDE had done a poor job not finding a host, Carlsen was reluctant to comment:

I can’t say anything about that.

Carlsen also pointed out that he has a busy schedule for the next two weeks. On May 7th he travels to the University of Trondheim, where his sponsor is offering 100,000 NOK (12,000 Euro) to any student who beats him.

A day later on May 8th Carlsen takes on the rest of Norway in an exhibition match held in Oslo’s biggest shopping mall and sponsored by Norwegian newspaper VG.no.

Carlsen’s manager Espen Agdestein also informed chess24 that Carlsen will take part in a fund raiser on May 15th for First Move, hosted by AF4C in New York.

When he returns on May 17th, Carlsen may get some time to celebrate Norway’s national day and finally rest for two weeks until Norway Chess starts on June 2nd.


Magnus did, however, find the time to film a short recap of his experiences in the Gashimov Memorial in Azerbaijan:

Carlsen explained his two losses by feeling "sluggish", and in turn explained that as follows:


He summed up the event as a whole and his hopes for upcoming tournaments like Norway Chess:

It was kind of a continuation of the style of the Candidates Tournament – a lot of fighting chess, sometimes too fighting, in the sense that some players maybe needed to play a bit more carefully in some games. I prefer to win five games and make five draws instead of winning five games and losing twice, obviously, but it was fun to win a lot of games and in the next tournaments I'll try and still play aggressively while not getting into such difficult positions as I did in a couple of the games.