Hikaru Nakamura has won the Tradewise Gibraltar Masters for a second year in a row after beating Maxime Vachier-Lagrave in a playoff that went all the way to Armageddon. You can rewatch commentary by Jan Gustafsson and Pepe Cuenca below. That victory earned Nakamura £20,000, while £15,000 went to Anna Muzychuk, who beat Saleh Salem to finish as the top ranked woman on 7/10. Vishy Anand ended with a good win with Black but his overall 6.5/10 and 41st place made it a tournament to forget for the great champion. 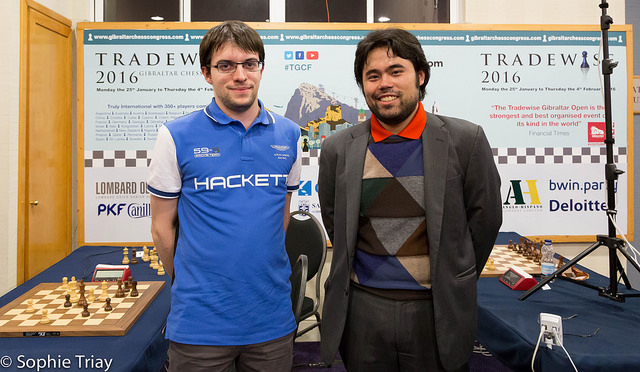 MVL and Nakamura finished tied on 8/10, but it was Hikaru who retained his title after winning the playoff | photo: Sophie Triay, Tradewise Gibraltar Chess Festival

You can replay all the games from the Gibraltar Masters with computer analysis using the selector below – switch rounds using the numbers below the player list or hover over a player’s name to see all his or her results:

With eight players tied for first place before the final round and a lot of money at stake it was always going to be incredibly tense. 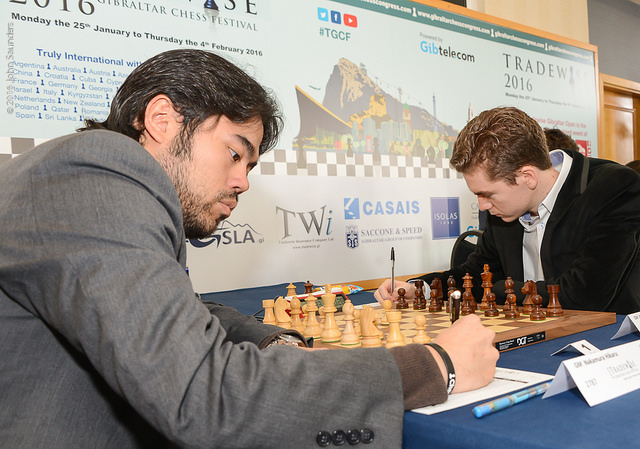 Nakamura - Anton on top board in the final round | photo: John Saunders, Tradewise Gibraltar Chess Festival

Young David Anton was the only player who took the sole lead at any point of the 2016 Gibraltar Masters and missed winning chances in Rounds 8 or 9, but all his work was undone in the final encounter with Hikaru Nakamura. He played the Dutch Defence with Black, surprised his illustrious opponent and was doing well, until he grabbed a pawn:

16…Bxh4!? Nakamura was ruthless as he took the f-pawn, expanded in the centre and doubled on the newly-opened h-file. In the final position the h8-bishop is a goner:

So Nakamura was favourite to win the £20,000 first prize, while David was ultimately left in a 15-player tie for 9th place, amounting to about £600.

The race was on to join Nakamura, with Etienne Bacrot and S. P. Sethuraman soon bowing out after repeating the first 24 moves of the Open Ruy Lopez draw between Carlsen and Ding Liren in the final round of the recent Tata Steel Masters. Magnus played on until move 99, but Bacrot called it a day after 34. 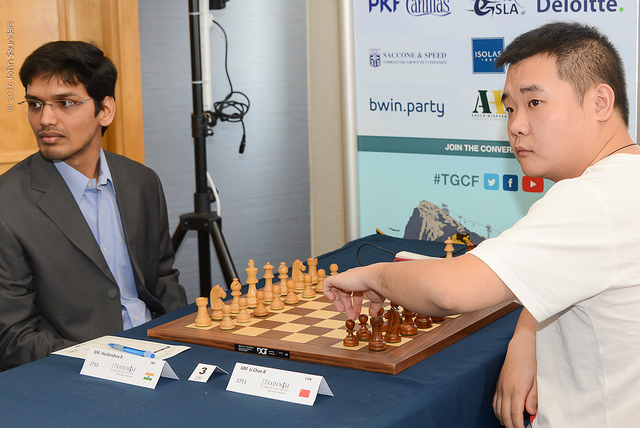 Harikrishan and Li Chao had to content themselves with a 6-way tie for 3rd place | photo: John Saunders, Tradewise Gibraltar Chess Festival

Maxime Vachier-Lagrave, meanwhile, made class tell in a complex game against his French team captain Sebastien Maze. That guaranteed us a playoff, but for a long, long time it was unclear if there would be two or three players involved. Pentala Harikrishna perhaps surprised Li Chao by castling kingside not queenside against the Petrov Defence and managed to embed a white pawn on e7 by move 32. It looked wonderful, but in the remaining 35 moves he failed to make any progress – unless you count delaying the playoff by 25 minutes! 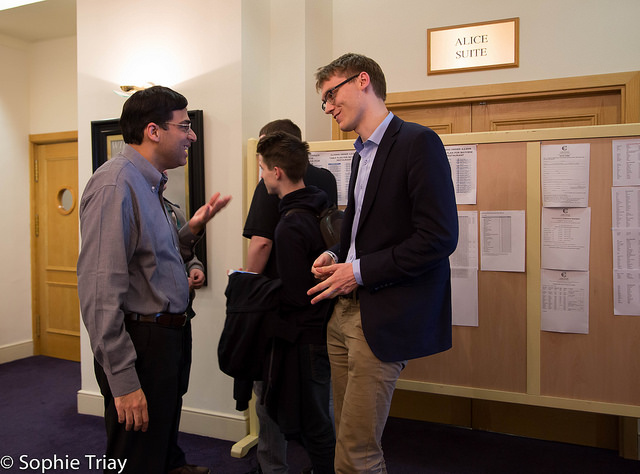 It was good to see Vishy with a smile on his face after his win over Erik Blomqvist | photo: Sophie Triay, Tradewise Gibraltar Chess Festival

Other notable games included Vishy Anand tying Erik Blomqvist in all kinds of knots to end on an outwardly respectable 6.5/10, Gawain Jones beating Yu Yangyi after the Chinese player failed to set up a tricky but well-known fortress and David Howell crumbling in a won position against Federico Perez Ponsa:

The biggest games outside those of the leaders, though, featured the top women in the event. The Muzychuk sisters and Yuliya Shvayger were all tied on 6/9 and had the white pieces, but it was a tough day at the office for Mariya Muzychuk, who lost to Lazaro Bruzon, and Shvayger, who lost to Gata Kamsky. 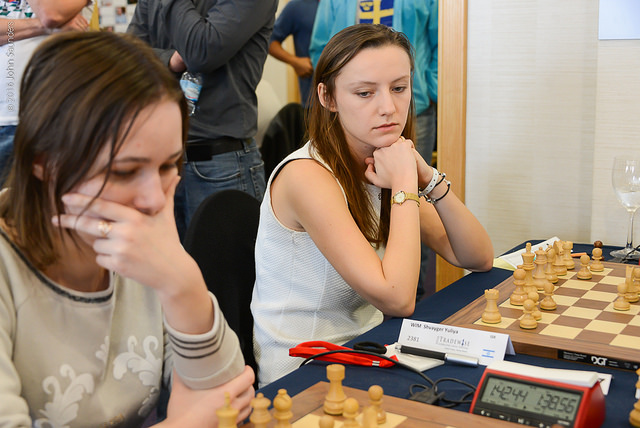 Anna also had a tough pairing against the UAE’s Saleh Salem, but she attacked from the start and made things look easy. Capturing a pawn with 33.Nxf6! was a nice blow:

The final standings at the top looked as follows:

So that leaves the playoff… The best way to relive the action is to watch the commentary from Jan Gustafsson and Pepe Cuenca:

After a few minutes thought Nakamura went for it: 16.Bxh7+! When the dust had settled Nakamura had three pawns for a piece and all the winning chances, but Maxime defended heroically to hold a draw.

The second rapid game was a quiet Berlin Wall draw, meaning 3 minute + 2 second blitz. In Game 3 Nakamura took a repetition at the end when it seems he could have played on with a big advantage. Game 4 was a relatively uneventful Siclian, meaning we were headed to Armageddon! 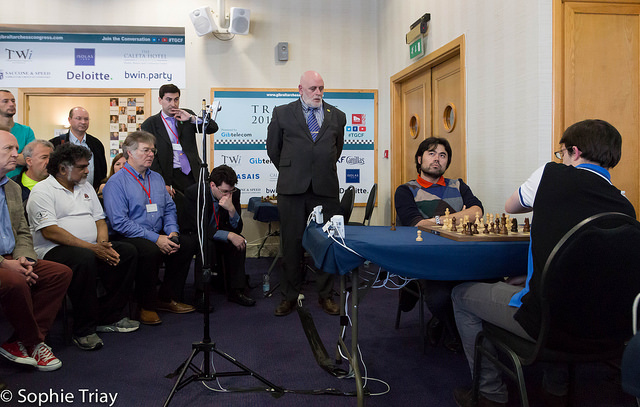 Maxime got White and had to beat Nakamura, but that was a very tough ask, especially when Nakamura again played the Berlin Defence. 38…Qc3! signalled the end:

Exchanging queens would make winning with White all but impossible, while 39.Re3 runs into 39…Qa1+ 40. Kg2 Nf5! Funnily enough White can play on with 41.Re1!, but it’s not playing for a win. After the desperate 39.Qxd6 Maxime only made another couple of moves before resigning.

You can see the speed they were moving in John Saunders’ video!

So Maxime had repeated his London tiebreak heartbreak, but on this occasion it was hardly the end of the world. He still took home the substantial £16,000 second prize.

Hikaru Nakamura, meanwhile, was happy… but more surprised… to have defended his title!

It bodes well for the upcoming Candidates Tournament, though before that Nakamura and Anand will both be playing in the Zurich Chess Challenge from 12-15 February.