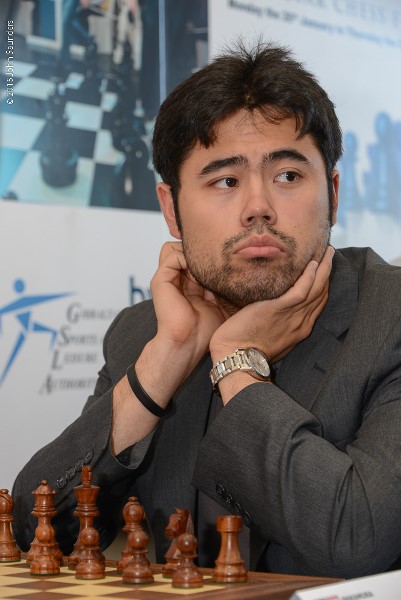 Hikaru Nakamura didn’t quite manage to “do a Caruana”, but he’ll probably settle for 7.5/8, a one-point lead with two rounds to go and his highest ever live rating of 2794.8! Paraguay’s 25-year-old Axel Bachmann is the surprise obstacle in Nakamura’s path in Round 9, while David Howell and Daniel Naroditsky are the other two young guns on 6.5/8. Peter Svidler is in the group of 16 players on 6/8, after a near miss against Women’s World Champion Hou Yifan.

If the Gibraltar Masters finishes with two or more players tied for first place it doesn’t, like many tournaments, share the prize money or award prizes based on tiebreak criteria. Instead there’s a play-off battle where a few minutes of chess can cost many thousands of pounds. It’s something you imagine most players would be very happy to avoid, and Hikaru Nakamura is certainly doing everything he can to seal the deal in advance.

In Round 7 he came within a whisker of matching Fabiano Caruana’s St. Louis streak of seven wins in a row when he outplayed David Howell with the black pieces to win a pawn. It’s to the English grandmaster’s credit that he managed to put up immense resistance and seemed to find the correct Vančura defence to draw the final position. In the era of chess computers, though, any inaccuracy is spotted in a flash, and Howell’s 63.Kb2 set off electronic buzzers with a countdown of mate in 32:

Nakamura realised it was critical and thought for 12 minutes before correctly playing 63…h4, but after 64.Rd4 he spent 17 minutes but “missed” the win with 64…Kg3, instead stepping the wrong direction with 64…Ke3. You can replay the game here and try making your own moves to understand what’s going on.

A couple of snapshots from elsewhere in the round: 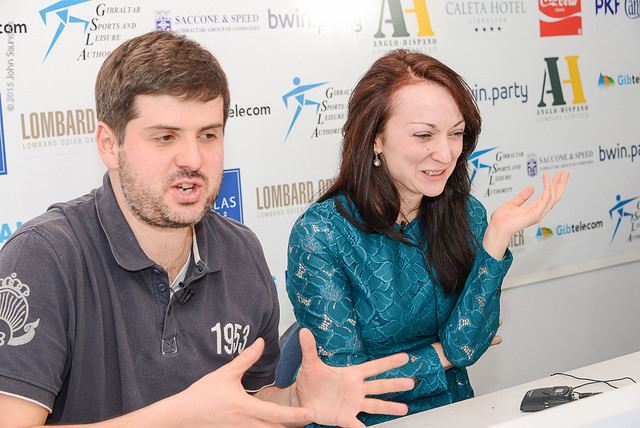 This was a great escape of epic proportions for the young Hungarian, who was in deep, deep trouble for most of the game but somehow even managed to win.

The knockout blow here is 24.Nf5!! when White is crashing through in all possible variations. Again, this is a good game to play through in our broadcast software where you can try out your own moves and see computer evaluations (it's faster as a premium member). That was only one of the killer blows Vazquez missed.

The Day’s Play show has some stunning footage of the views from the top of the rock:

With the tension building there were no less than nine draws in the top eleven games in Round 8, but at least one of the wins was vital – Hikaru Nakamura outplayed Qatar Masters Open winner Yu Yangyi with an Alapin Sicilian (1.e4 c5 2.c3). 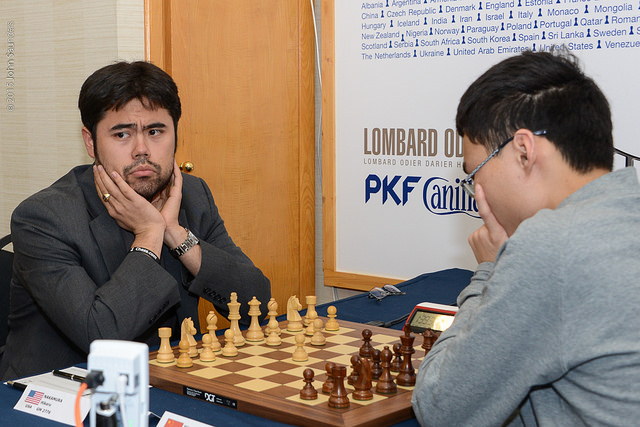 Nakamura wonders how it all came to this - playing 2.c3 against the Sicilian? | photo: John Saunders, official website

It all went wrong early on for the young Chinese player after a misjudged swap of a bishop for a knight and falling seriously behind in development. Nakamura’s structural edge grew to such an extent that he could play tactics that weren't strictly necessary, such as the 29.Bxa6 pawn grab:

29…bxa6 would run into 30.Rc3. Nakamura was relentless and resignation came on move 39. The win takes him to the verge of overall victory, gives him a new personal live rating best (2794.8) and takes him up to no. 12 on the list of highest ever ratings. A couple more wins and he could reach 2800 and no. 4 on the current list. 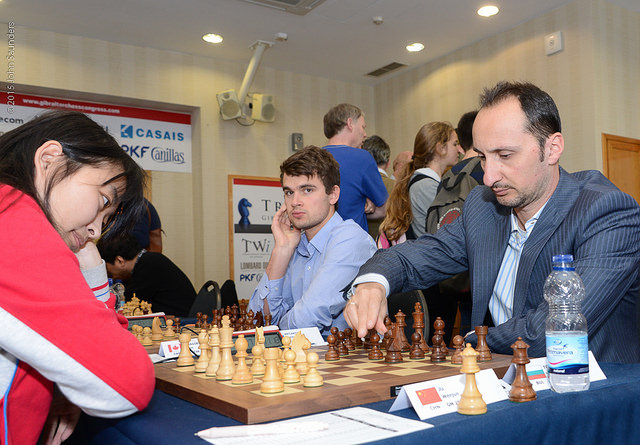 Elsewhere Ju Wenjun briefly had two queens on the board in a battling game against Veselin Topalov, but to no avail. The Bulgarian top seed regained some of the ground lost with his defeat to Nakamura, but needs a lot of help if he's going to win the tournament. The same applies to third seed Peter Svidler, although he couldn’t have come much closer to inflicting the first defeat of the tournament on Women’s World Champion Hou Yifan. 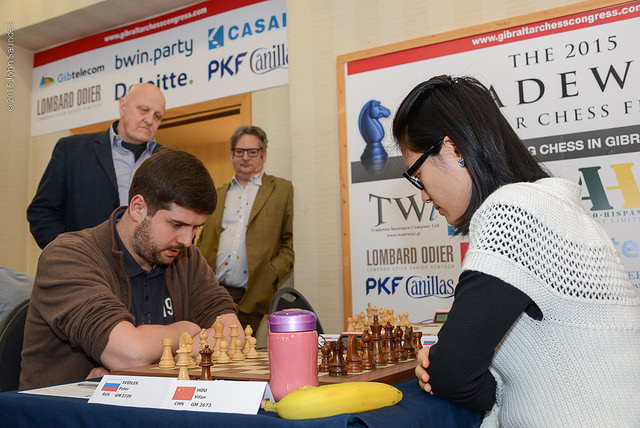 After a well-played game 47.Rh6 seemed like a relatively straightforward win, but even after 47.e7 Bf7 it was still possible to take home the full point:

So the standings at the top are as follows:

Nakamura knows that if he can beat Axel Bachmann in Wednesday's Round 9 a draw in the game between David Howell and Daniel Naroditsky would ensure him the £20,000 first prize with a round to spare.

Don't miss all the top games here on chess24, or alternatively you can watch the action using our free mobile apps: