Nakamura also helped his team to victory in the Battle of the Sexes | photo: Sophie Triay, official website

Hikaru Nakamura jumped on the six-in-a-row bandwagon by beating Veselin Topalov in the crunch match of Round 6 of the Gibraltar Masters. The win meant Hikaru not only remained in the sole lead but also regained bragging rights as the US no. 1 from Wesley So. He didn’t increase his lead, though, as Yu Yangyi and David Howell both moved to 5.5/6, with David inflicting the first defeat in a long time on Chinese rising star Wei Yi. Up next is Nakamura.

Hikaru Nakamura’s progress in this year’s Gibraltar Masters has been hugely impressive. Doing little flashy he’s smoothly outplayed his opponents while keeping absolute control of the positions. The exception was his Round 5 win over India’s GM Adhiban, who must hardly have known what hit him when he came up against some wild opening preparation. The position after move 17 was picturesque, with Nakamura’s c and b-pawns giving more than enough compensation for the material deficit:

What followed was by no means an easy win, but it was the kind of position where sheer talent was likely to tell in the end. Replay the game with computer analysis here, or you can watch Nakamura's explanation of the game on LiveStream.

That game took Nakamura into the sole lead, since China’s Wei Yi outplayed but couldn’t quite finish off Cuban-born Spanish GM Renier Vazquez Igarza. Veselin Topalov had better luck, picking up his fourth win in five when he won a complex struggle with the black pieces against Spain’s David Anton.

That set up one of the showdowns we’d all been waiting for in Round 6 – Nakamura-Topalov. First, though, there was the small matter of the Battle of the Sexes, captured on film in The Day’s Play:

As you’ll have seen, 3rd seed Peter Svidler was an active participant there, but chose to take a bye for Round 6, along with his second and the tournament’s 4th seed Nikita Vitiugov. They were probably honing some devastating openings weapons… or watching cricket 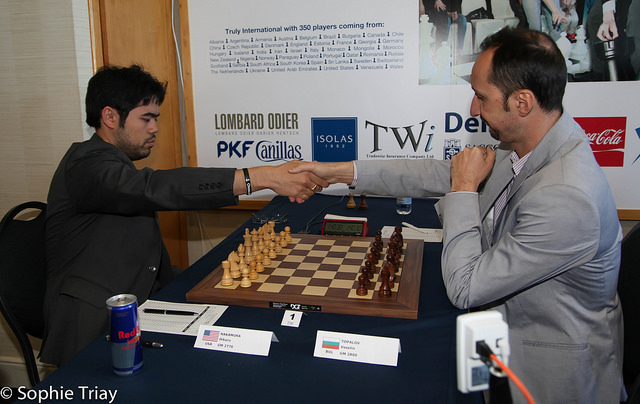 So back to the showdown, which had the potential to restore Hikaru Nakamura's place as US no. 1…

I visualize @GMHikaru preparing for #GibChess with a pic of Wesley So on his dartboard. Probably needs a new face there soon.

It’s not clear if that was quite how Nakamura approached it, but he certainly meant business. He dodged the sharpest lines of the Sicilian with 3.Bb5 and was content to allow Topalov's pieces to begin swarming on the kingside:

They look menacing, but Nakamura made it clear nothing of significance was happening there with a rook lift on the queenside: 25.Ra3 - 26.Rb3! He then set about methodically probing for weaknesses until Veselin – always a dynamic player – could withstand it no longer and went for the thematic d5-pawn break and later offered an exchange sac (rejected). In the end Hikaru simply managed to round up first one then the other black queenside pawn, and all that remained to be done was consolidate.

After being beaten so convincingly by a key rival not every player would be happy to go for dinner with their tormentor, but Topalov is one of the best top players when it comes to shrugging off defeats:

Nakamura’s next opponent is English GM David Howell, who admitted at the London Chess Classic that how the next year went would help him decide whether to remain a chess professional. On the evidence of Gibraltar so far it’s a definite yes, since he beat his third strong grandmaster in a row and proved that Wei Yi is human after all. 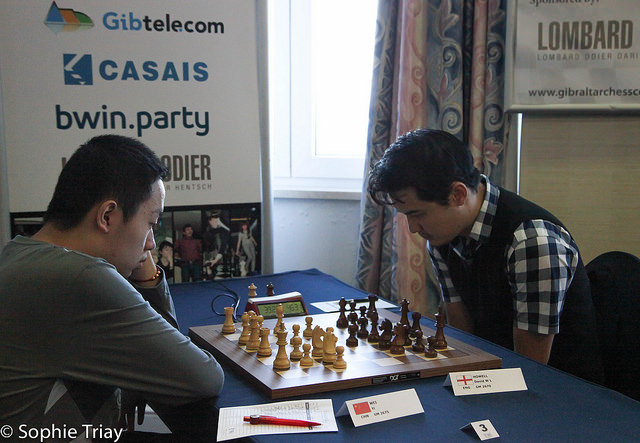 Let's hope Wei Yi's loss was a minor blip or we might have to deal with the issue of whether or not we can claim he officially crossed the 2700 barrier almost a year sooner than Magnus Carlsen had managed that feat... | photo: Sophie Triay, official website

The 15-year-old is used to doing the grinding but was ground down himself in 87 moves after some unconvincing strategic decisions. Perhaps the final nail in the coffin was a small nuance:

Here 23.Qc3, as played by Wei Yi, forced him to accept isolated doubled e-pawns after 23…exd4, while if he’d played 23.Qa3 he could have met 23…exd4 with 24.cxd6! when White is on top. Instead Howell was remorseless and gets to meet Nakamura in Round 7. Their record to date is one win for Nakamura in the 2011 London Chess Classic and two draws in the same event in 2009 and 2010. 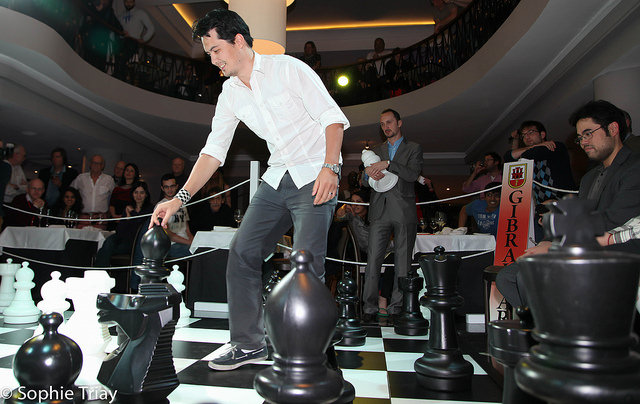 David Howell was on the same side with Topalov and Nakamura in the Battle of the Sexes | photo: Sophie Triay, official website

It’s not all bad news for China, though. Qatar Masters winner Yu Yangyi suddenly had all the geometry of the chess board working on his side in a position with all six heavy pieces on the board, while Hou Yifan played a small positional gem against Sandro Mareco. The two Chinese players meet in Round 7.

We should give a mention to Lawrence Trent for his g-pawn extravaganza, although it was only good enough for a draw:

That provoked the responses:

@LawrenceTrentIM @chess24com Thats would be me.

Richard Rapport's g-pawn antics were quite sober by his standards against Avital Boruchovsky:

But he did at least go on to win!

So the standings at the top after six out of ten rounds of the 2015 Gibraltar Masters are as follows (we've included the huge group on 4.5 to give some idea of just how many players are still in contention): 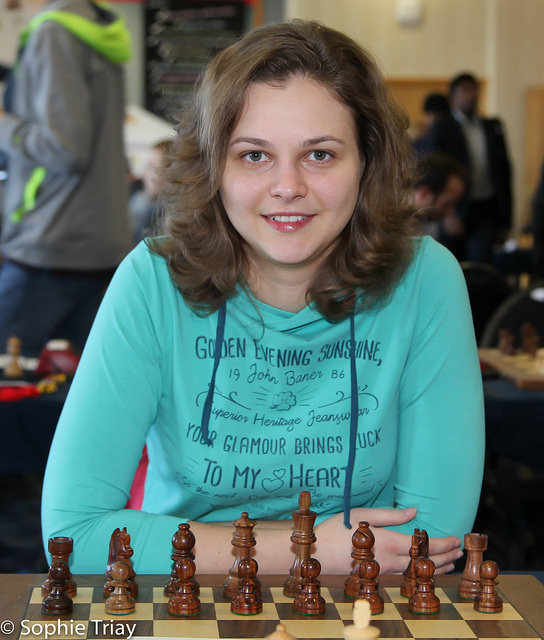 Anna Muzychuk is unbeaten and only behind Hou Yifan in the race for the women's £15,000 first prize | photo: Sophie Triay, official website

So it's same time, same place for Round 7. Follow all the top games here on chess24, or alternatively you can also watch the action using our free mobile apps: