15-year-old Wei Yi has broken through the 2700 barrier on the live rating lists, almost a full year sooner than World Champion Magnus Carlsen managed that feat. He could be set for a showdown with Hikaru Nakamura, since both players have a perfect 4/4 and heavily outrate Adhiban and Renier Vazquez Igarza, the only other players not to drop a half point. Veselin Topalov and Peter Svidler lurk in the group on 3.5/4. As well as looking back on Rounds 3 and 4 we have exclusive video footage of the Team Blitz tournament. 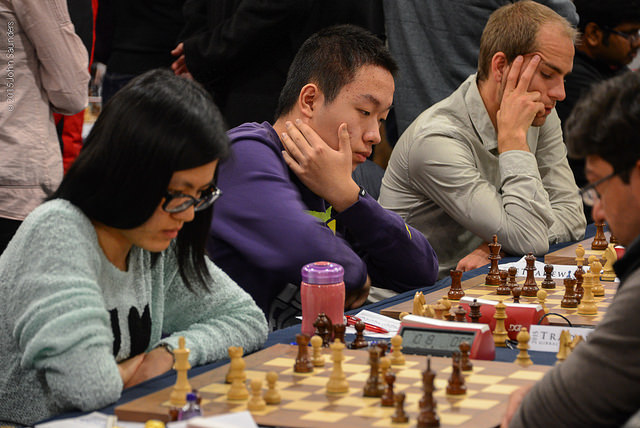 Round 3: Women power and Wei Yi

One of the great appeals of the Tradewise Gibraltar Chess Festival is the number of women who take part, drawn by a very healthy separate prize fund that includes £15,000 for the highest-placed woman (only £5,000 less than on offer for overall first place). Women’s World Champion Hou Yifan leads the chase, although she needed a little good fortune in round 3:

The position is finely balanced, since both players have obvious mating threats, but for now the queen on g3 means Black won’t get mated the moment his king ventures onto the g-file. Mohammed Al-Sayed cracked, though, with 34…Qc7?, when Hou Yifan was immediately able to decide the game with 35.Qe7! (replay the game). 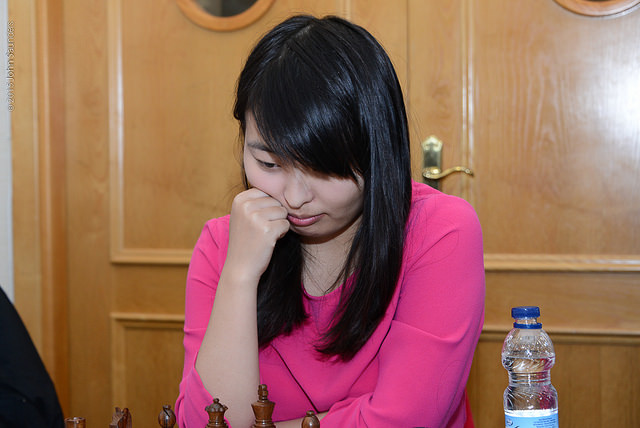 Ju Wenjun may have slipped a long way below Hou Yifan, but at her best she's dazzling | photo: John Saunders, official website

The true female heroes of the day, though, were elsewhere. Another Chinese player, 2547-rated Ju Wenjun, simply crushed Richard Rapport (2703). The 18-year-old Hungarian’s highly combustible openings can sometimes backfire, but this was an extreme case! The position after 33.f5 says it all:

He resigned on move 40 with the computer counting down to mate (replay the game). 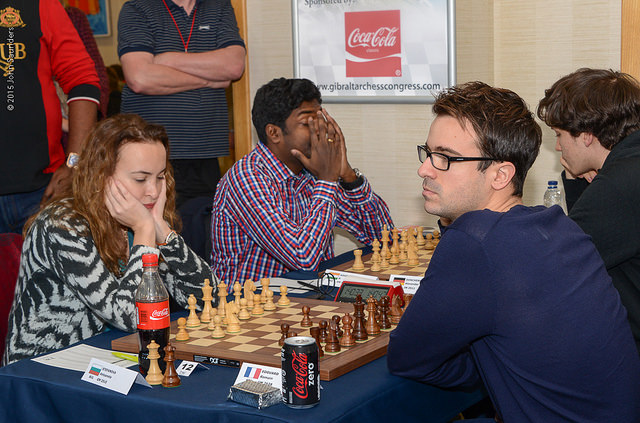 Bulgarian former Women’s World Champion Antoaneta Stefanova (2515) won in similarly convincing fashion against France’s Romain Edouard (2638). First she went for a finely judged pawn break, then she thrust her c-pawn like a dagger into Black’s position, then she crashed through on the kingside:

Ever since my team mate Romain Edouard wrote a book on avoidable mistakes, he has been making them by the bucket-load,

Wei Yi spoilt the picture by comprehensively outplaying Bela Khotenashvili with the black pieces. In the process he crossed the 2700 rating mark at 15 years and 7 months, smashing the record previously held by that slouch Magnus Carlsen, who required 16 years and 7 months. If the significance of the achievement needs any added emphasis it’s worth noting that the next players in the list are Anish Giri, Maxime Vachier-Lagrave, Sergej Karjakin, Vladimir Kramnik and Fabiano Caruana… Whatever happened to them? 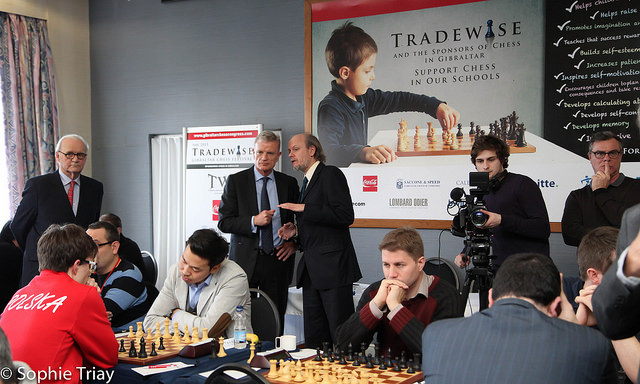 Elsewhere there were wins for favourites Veselin Topalov, Peter Svidler and Hikaru Nakamura, with the latter showing a willingness to grind out a result against Tamir Nabaty, in a game that ran on long into the evening. One of the shortest wins of the day, meanwhile, was a beautiful demolition job by Harikrishna, who soon opened up Ioan-Christian Chirila’s king to such an extent that he could crash through in style with moves like 19.Re3!

Replay the game here. Harikrishna also talks about his win in The Day’s Play:

The Gibraltar Chess Festival has a great program of accompanying events, including the traditional Team Blitz tournament, when teams of four players get to compete for cash prizes... but more importantly, have a lot of fun. 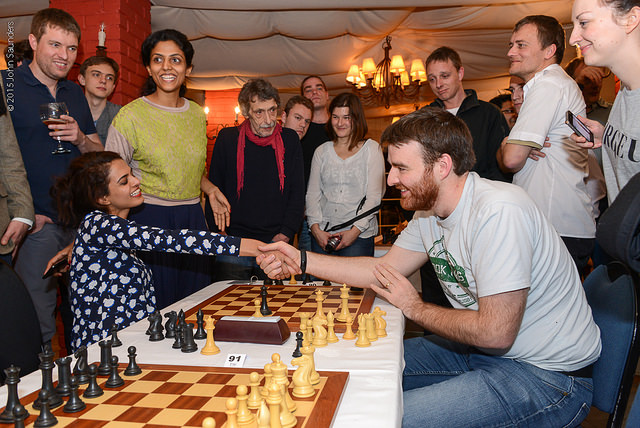 Here’s a slightly accelerated glimpse of the action:

The hands-down winner of the trash-talk award was a certain IM Lawrence Trent, who came up against the tournament arbiter Rainer Niermann in the first round:

The man making a plea for Lawrence to shut up, at least for a while, was Bulgaria’s Ivan Cheparinov, at 2681 the highest rated player in the event. Here’s how he tried to concentrate while listening to Lawrence’s stream of consciousness in the background:

Cheparinov, joined by grandmasters Ivan Salgado, Antoaneta Stefanova and Ruben Felgaer, went on to win the 6-round event (full results, and occasionally unpublishable team names, here!). One personal victory came against Norway’s 15-year-old rising star Aryan Tari, with Ivan seizing the initiative from the start and finishing with a tactical blow:

It wouldn’t be blitz without time scrambles, though, so here’s a tense game that ended with the players living on the 2-second increment per move. Spanish Blitz Champion and European Championship runner-up David Anton (2617) faces Rustem Dautov (2604), a Russian-born grandmaster who had the German team’s best performance rating when they won silver medals at the 2000 Olympiad. Although he turned his back on a professional chess career to work for a poker site in Gibraltar he still plays regularly for Baden-Baden in the German Chess League:

Round 4: Nakamura in cruise control

Round 4 was delayed as the players awaited for the arrival of Gibraltar’s Chief Minister, Fabian Picardo, whose visit was front page news: 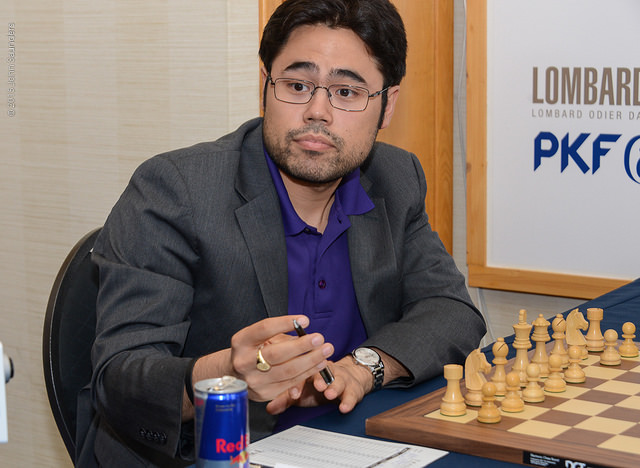 Hikaru Nakamura smoothly outplayed Sweden’s Nils Grandelius to move to 4/4. What was impressive wasn’t so much the way he proved his opponent’s pawn advance was simply blundering a pawn, but how he didn’t allow the slightest hint of counterplay:

In the final position Nils can barely move a piece, with Nakamura’s queen poised to gobble up the black queenside pawns if rooks are exchanged (replay the game here).

There were also wins for Svidler and Topalov, while the women who had starred the day before couldn’t celebrate for long. Antoaneta Stefanova looked to be doing fine against Adhiban:

All’s well after 22…Rxa7 23.Rxb6, but the zwischenzug 22…Qf6! changed everything, and within a few moves Adhiban was on course to lead with 4/4 (replay the game here). 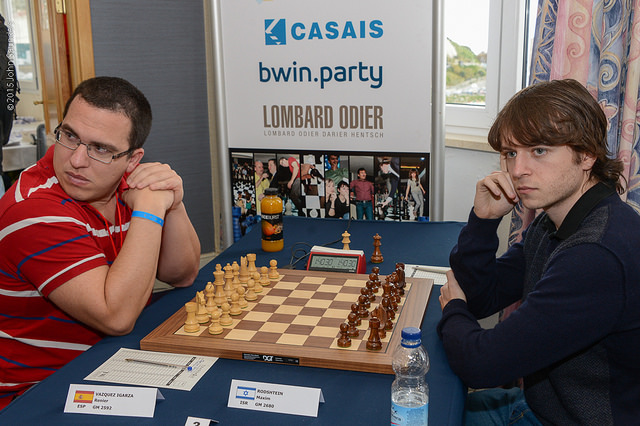 Ju Wenjun lost to her compatriot Wei Yi in one of the weirdest games of the day. Both players had already been burning time when Wei Yi stopped to think 40 minutes after 6...Re8:

The most curious thing was the position wasn’t entirely new...

In that game Paulsen took on c6 with his knight, and went on to lose a classic. Wei Yi finally decided to retreat his knight to f3… and won. After a slow start he finally got things moving here with his d-pawn:

9.d3! Re8 10.d4! Be7 11.d5! Perhaps not wanting to retreat a third piece in three moves Ju Wenjun went for 11…a6, but White kept an edge and finally managed to convert a tricky knight and rook ending (replay the game here). No sign of Wei Yi dipping back down below 2700 yet!

So we have four leaders, but a group of 13 only half a point behind: