Top seed Shakhriyar Mamedyarov forfeited his game against Praggnanandhaa in Round 8 of the 2020 Gibraltar Masters and has pulled out of the tournament for health reasons. The leaders are 17-year-old Andrey Esipenko, 19-year-old Parham Maghsoodloo, 21-year-old David Paravyan and 30-year-old Wang Hao, with the Chinese player the only top seed living up to or exceeding expectations. Maxime Vachier-Lagrave is a point back on 5.5/8, together with the leading female players Zhansaya Abdumalik and Tan Zhongyi. 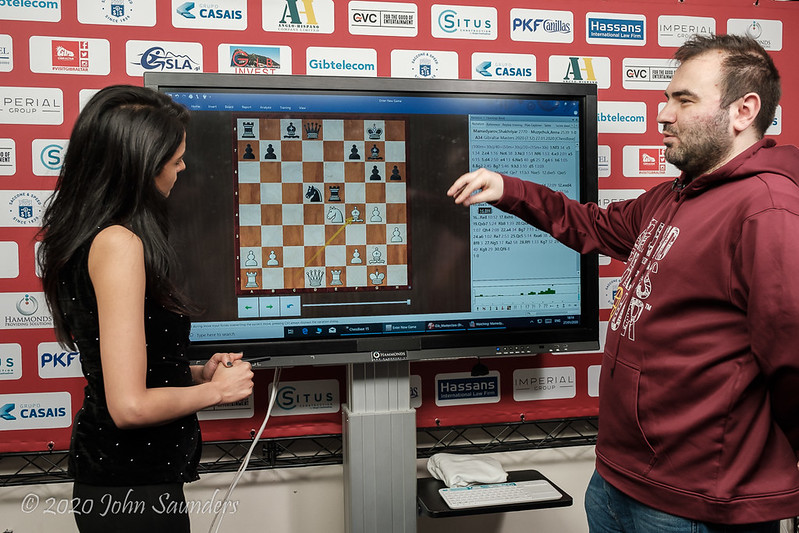 Shakhriyar Mamedyarov shows what he would have played against Anna Muzychuk in Round 7 if he'd been feeling well enough to play an ending! | photo: John Saunders, official website

You can replay all the Gibraltar Masters games using the selector below:

And here’s the Round 8 commentary from David Howell and Fiona Steil-Antoni:

It’s been a very strange Gibraltar Masters this year, with none of the established top players doing well except for Wang Hao, who impressively handled a complicated position to beat 14-year-old Praggnanandhaa in Round 7 and join the leaders. 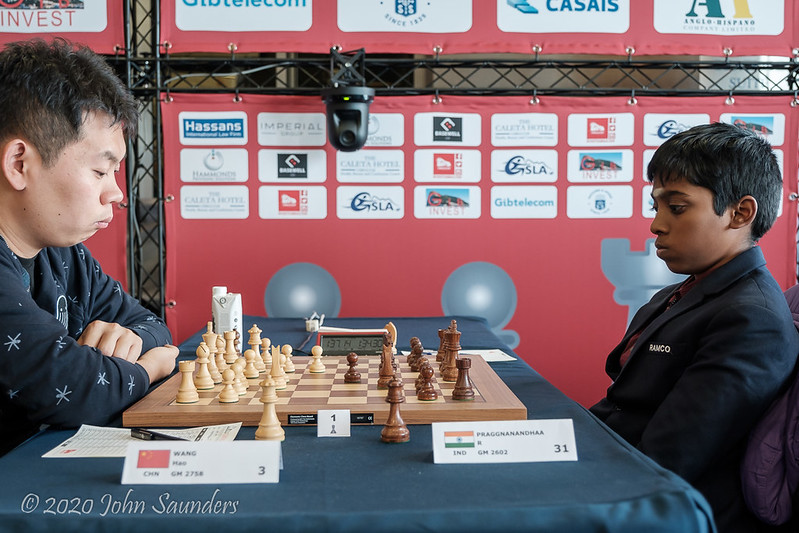 A tough loss for Praggnanandhaa, but bouncing back turned out to be much easier than he could have imagined | photo: John Saunders, official website

For the Indian kid, who had beaten Veselin Topalov in the previous round, it didn’t look as though it was going to get any easier, since he was paired against top seed Shakhriyar Mamedyarov in Round 8. But in fact Pragga was able to bounce back immediately, since his opponent didn’t turn up for the game and lost by forfeit (no more byes are allowed after Round 7):

It’s now clear that Mamedyarov won’t take any further part in the tournament, though you certainly couldn’t accuse him of not playing a full role before that. He gave a masterclass after a long game in Round 2…

…and was an enthusiastic member of the men’s team for the Battle of the Sexes (don't miss the intro!)…

…but his health issues were clear after his win over Anna Muzychuk in Round 7. The game began with happy memories for Shakh, since he got to play the same line with 7.g4 that he used to beat Maxime Vachier-Lagrave in Biel 2018, the event he won after becoming the last player to beat Magnus Carlsen in classical chess. 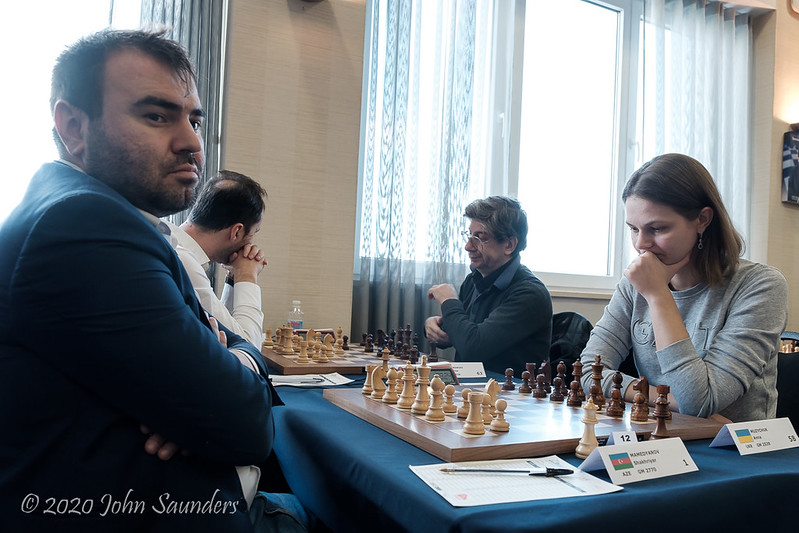 The new move came only after 9.h3:

Here Maxime played 9…Qe7, but Mamedyarov described his 10.b3! as a “fantastic move”, offering a pawn sacrifice that Maxime went on to regret accepting. Anna told her opponent after the game she hadn’t expected this line, and her 9…d5?! was no improvement – in fact Shakh said he was “absolutely winning” already. The health issues became a factor on move 16:

It’s of course an absolutely winning endgame, but my feeling is not very good and I don’t want to play an endgame!

Things went very smoothly for White after that and he went on to win in 30 moves. Shakh talked about how tough events like Gibraltar can be for the best players – “in open tournaments every draw is a catastrophe!” – and then said that it was “very good and fantastic” that he could keep playing the tournament considering how bad he was feeling:

As we now know, it became too much. 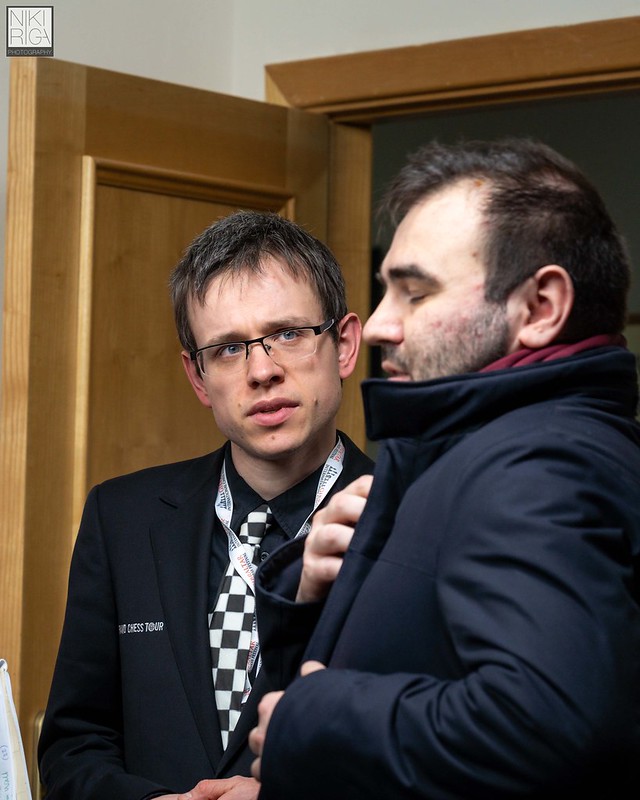 Find someone who looks at you with as much concern as David Navara | photo: Niki Riga, official website

Mamedyarov’s absence is an opportunity for others, but as few top players are firing on all cylinders the battle has become extremely tense. In Round 8, not counting Praggnanandhaa-Mamedyarov, there was only one decisive game on the top 16 boards, a win for Ivan Cheparinov over Noel Studer, where the Swiss player self-destructed in a roughly equal position. 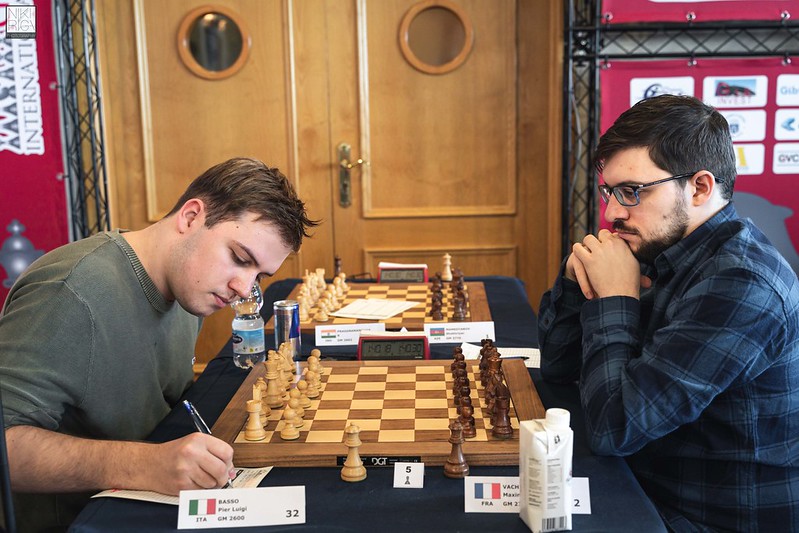 The remaining favourite, Maxime Vachier-Lagrave, was held to a 5th draw in Round 8, this time by Pier Luigi Basso, with the French no. 1 falling out of the Top 10 on the live rating list while Wang Hao climbed to 8th place: 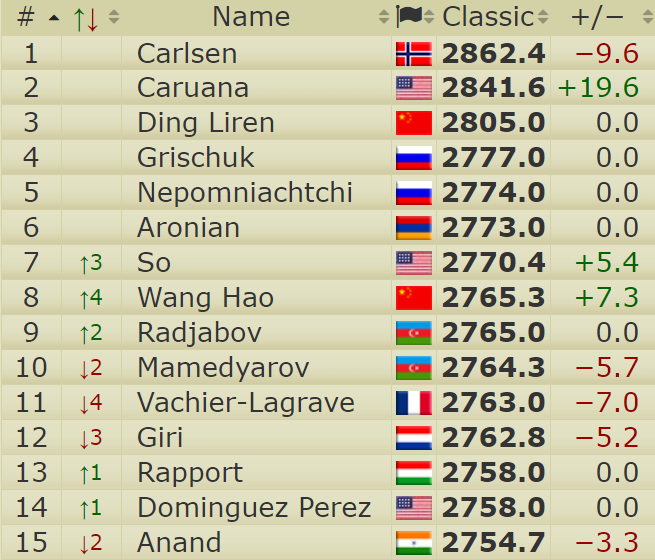 Maxime is one point back, as are the top female players, 20-year-old Zhansaya Abdumalik from Kazakhstan, who scored a smooth win over Indian GM Suri Vaibhav in Round 7…

…and Chinese former Women’s World Champion Tan Zhongyi, who finished in style against Russian GM Maksim Chigaev in Round 8:

No Isle of Man tournament this year

Peter Doggers notes that the Gibraltar Masters might be the strongest open tournament of 2020, since the Isle of Man Open, which in 2019 became the FIDE Grand Swiss, isn’t going to take place this year. It may be unconnected, but one potential reason for skipping this year is that the event has been sponsored by the Scheinberg family, while right now billionaire PokerStars co-founder Isai Scheinberg is on $1 million bail in the US after finally surrendering to US authorities. He had previously been the only one of 11 defendants indicted on Black Friday not to face justice in the US on charges related to offering poker services to US players.

Isai Scheinberg made a rare public appearance at the closing ceremony of the 2017 Isle of Man International, where Magnus Carlsen took the £50,000 top prize | photo: John Saunders, official website

Back in 2012 PokerStars reached a $731 million civil settlement with the US government that included purchasing the Full Tilt Poker site and paying out the US players who would otherwise have lost their deposits. That made Isai a hero for many, while this time round it seems that a plea bargain will also be agreed. Federal prosecutor Olga Zverovich commented, “We have an agreement in principle on the basic terms”.

But back to Gibraltar! Here are the standings at the top with two rounds to go:

Wednesday’s penultimate round will be hugely important for the fate of the £30,000 top prize and you can try predicting the results in our Gibraltar Masters Fantasy Contest. Simply make your predictions here and the top scorer will win a mug! 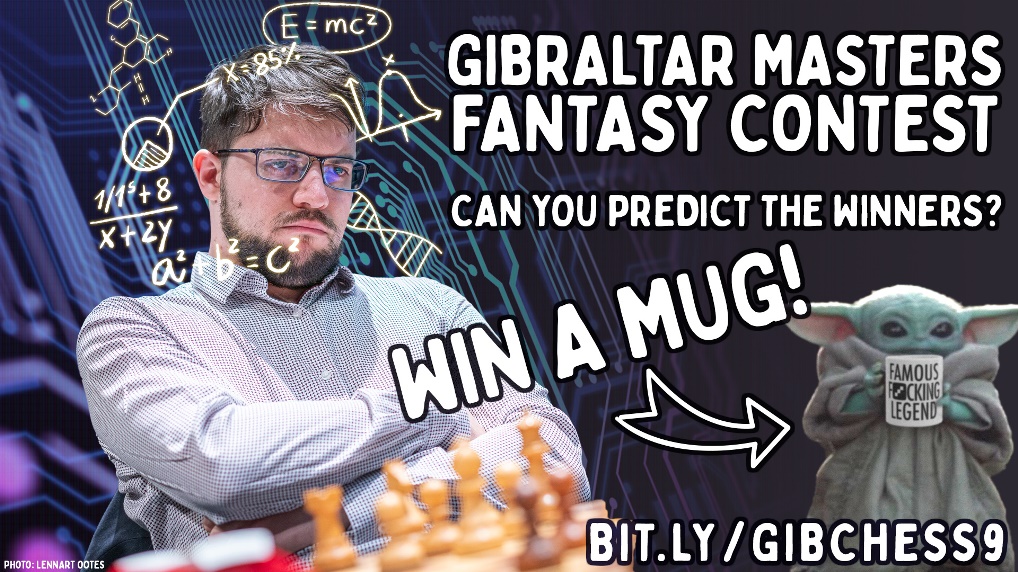 Then follow all the action live here on chess24 from 15:00 CET with commentary by David Howell and Fiona Steil-Antoni!