Indian star GM Rameshbabu Praggnanandhaa has blasted into the lead of the Gelfand Challenge, scoring a perfect 5/5 on Friday in the second event of the Julius Baer Challengers Chess Tour. Now at the tournament’s halfway point, Pragg is tied for the lead at 8/10 with Uzbekistan GM Nodirbek Abdusattorov, who was one of several players to notch four wins on Friday and stay in front of a furious pace set by 20 of the world’s best next-generation talents. 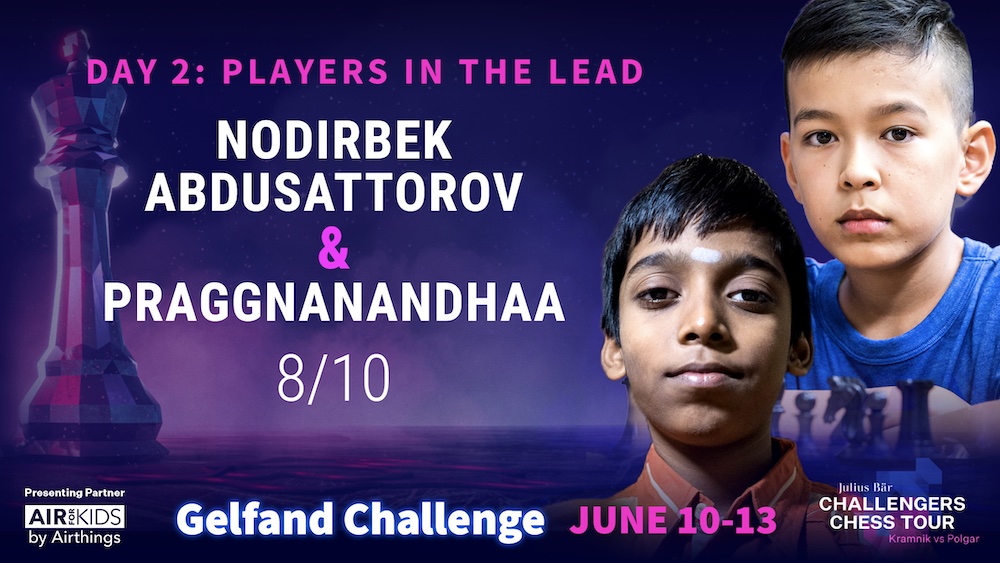 You can replay all the games and check out the pairings for the Gelfand Challenge using the selector below — click on a result to open the game with computer analysis or hover over a player’s name to see all his or her results.

You can replay the full live commentary from Day 2 from David Howell and Jovanka Houska, along with several guests such as Hou Yifan and the namesake for the second event in the Challengers Chess Tour, Boris Gelfand.

The Challengers Chess Tour coaching sessions are being recorded and edited and will be released weekly for the next three months so that chess24 Premium users can join the young stars in learning from some of the world's best coaches. Sessions by Boris Gelfand, Ju Wenjun, Surya Ganguly, Arthur Kogan and Anna Muzychuk are ready to view now!

If you’re not yet Premium you can get 40% off all subscriptions by entering the voucher code CHALLENGEYOURSELF on the Go Premium page.

Winner of the first Challengers Tour event, the Polgar Challenge in April, 15-year-old prodigy Praggnanandhaa has regained control of the Gelfand Challenge with bold play and a completely decisive scorecard. His only two losses of the tournament came early on Day 1, to American GM Awonder Liang, who put together his own 5-win day on Thursday; and Abdusattorov, who Pragg is now tied with on the scoreboard.

Friday’s streak was full of several solid games, including two wins with the black pieces against compatriots GM Nihal Sarin in the day’s Round 6 opener, and GM Leon Mendonca’s Reti in Round 8.

But a pivotal Round 9 game with German wunderkind GM Vincent Keymer, who sits one point behind in a three-way tie for second place with 7/10, perhaps showcased Pragg’s ability to play even outside his own repertoire.

Planning a King’s Indian Attack with 1.Nf3, Pragg appeared to mouse slip his second move, missing the g3-fianchetto and instead playing 2.h3?!

If it was a mouse slip, he took it in his stride, however, maintaining an advantage through several opening transpositions and, at the very least, confusing his opponent enough to earn an extra minute on the clock.

Soon Pragg had a dangerous-looking bishop pair and a queen-rook battery staring down at the black king, and Keymer’s attempt at detente by queen trade brought collapse. With 35.Qxa4 Nxa4 36.Rc4 b5 37. Rxc6, all lanes were opening up for White. Black’s 39...Nd5 left the knight pinned and Keymer resigned after 40.Rd6.

As the Challengers Tour field is split between 10 male and 10 female players, several statements were made in the battle of the sexes on Friday, not the least of which was by Kazakhstan IM Dinara Saduakassova, who put a convincing end to the streak of GM Awonder Liang. The American ace had won 5/5 on Day 1 and grabbed a sixth win in the first round on Friday, but the joyride was over when the No. 12 female in the world turned in an extremely solid game from start to finish.


There was only one moment of doubt, when Dinara hinted at allowing an early draw by repetition. Her coach and tournament namesake Boris Gelfand commented:

I will ask her, it's a very good question - if she was happy with a draw or she was playing a mind game, that Awonder would do something else. Because if she was happy with a draw, I'm not happy! Because this tournament all the girls and boys are given a unique opportunity to play each other, to participate, to get trained. So they have to fight! If you score half a point more, half a point less, it will not change their lives or careers. If you can clinch first place and qualification to the Meltwater Tour it's fair enough, but if you are playing Round 7 and you are happy with a draw, I cannot accept it!

In a positional middlegame with two bishop pairs and a couple of exposed kings, Saduakassova correctly found 45.Bg7+.

Liang should have accepted the bishop trade with 46...Kxg7 Rxe7+ to keep the game in balance. His attempt to protect the bishop with 45...Kf7? was fatal, however, leading to a loss after 46.Bxh6 Ke6 47. Rxe7+ blundered the piece to the eventual fork of the black rook.

“(Saduakassova) has a strong character and a fighting spirit, always a pleasure to see,” said Boris.

Liang had nothing short of a bad day after the loss to Saduakassova, following his six wins with three straight defeats, and only finding this gift in a balanced position against a time-desperate IM Olga Badelka in the final game of the day.

Another gender-important statement was made in Round 9 with Azerbaijan IM Gunay Mammadzada’s win over Nodirbek Abdusattorov — his only loss on Friday. Against a 3...Qa5 Scandinavian, she was able to trap Black’s light-squared bishop on the kingside, with 16.g4 and 17.h4, and then clogged up the queenside, stifling any possibility of attack.

Resignation came under the threat of several forks and checkmates.

Also scoring 4/5 on Friday was Indian GM Gukesh D, who included a Round 9 victory over Liang to join a three-way tie in second place with 7/10; and Russian 14-year-old IM Volodar Murzin, who moved into the top half of the pack at 6/10. 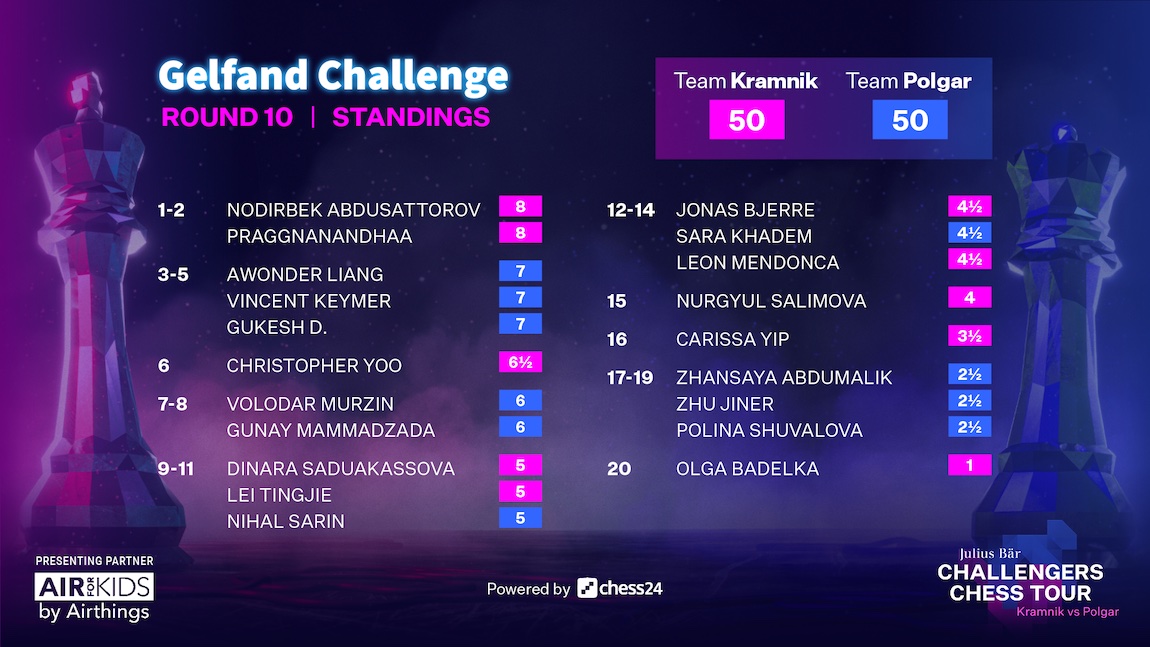 With the 20 young stars of the Challengers Tour split between Team Judit Polgar and Team Vladimir Kramnik — and the 10 winners earning a trip to the 2021 World Chess Championship match between Magnus Carlsen and Ian Nepomniachtchi this November in Dubai — at the midway point of the Gelfand Challenge, the two teams are tied perfectly at 50 points apiece.

The third of four days of world-beating junior action in the Gelfand Challenge resumes tomorrow at 15:00 CEST here on chess24, with the winner awarded a spot in the next Meltwater Champions Chess Tour event starting June 26th.