Is Magnus Carlsen the greatest chess player ever? Not according to chess24's Hall of Fame

The reigning World Champion Magnus Carlsen has been ranked only second behind Garry Kasparov, while Bobby Fischer is third in the full Hall of Fame that is revealed on chess24 today. The complete list of the 50 greatest players of all times comes as the Norwegian World Champion prepares to play in the Skilling Open, the first event on the $1.5 million Champions Chess Tour. That action kicks off next Sunday, November 22nd. 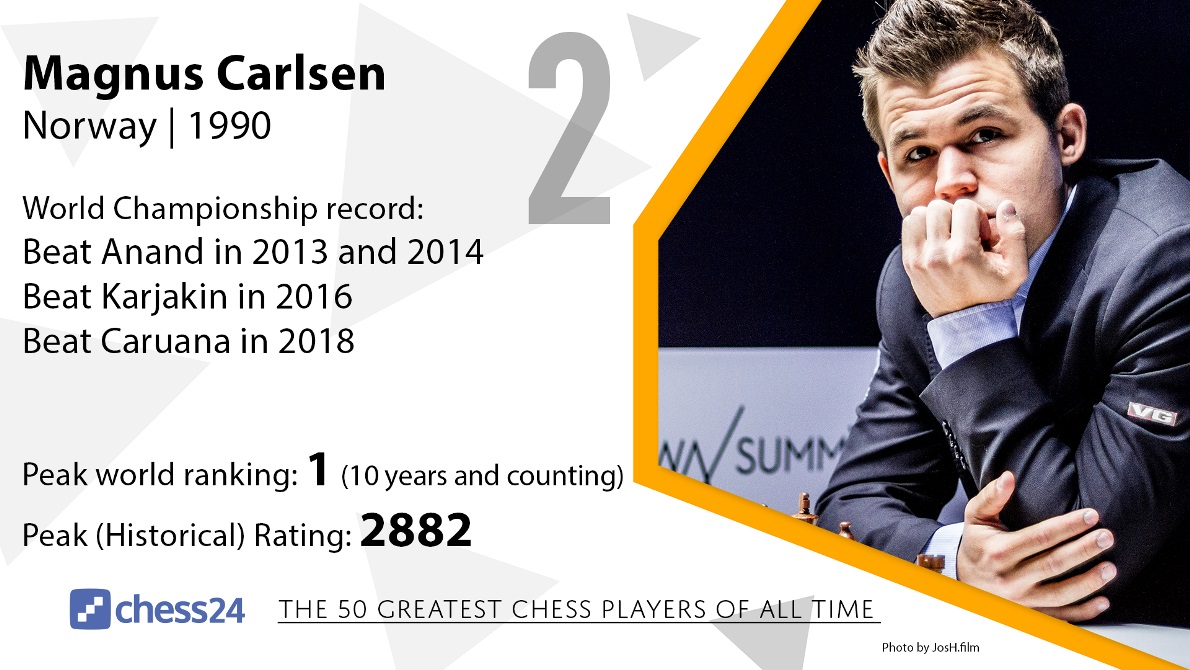 Today chess24 can reveal the players who topped the list of the 50 Greatest Players of All Time, according to our expert panel, grandmasters Jan Gustafsson and Peter Heine Nielsen. The duo ranked the best players in the world in a popular video series where the names were gradually revealed over the course of two months.

The video series, where each and every player on the list is discussed with a sample game, is available for free for Premium members. 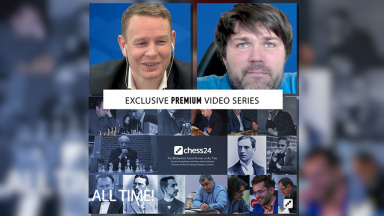 Get 40% off Premium-membership with the code Carlsen40


Using chess statistician Jeff Sonas' Chessmetrics calculations as the basis for the list, the rankings have caused a huge debate among chess fans around the world, with the authors receiving both praise and criticisim. It's unlikely to end with this. 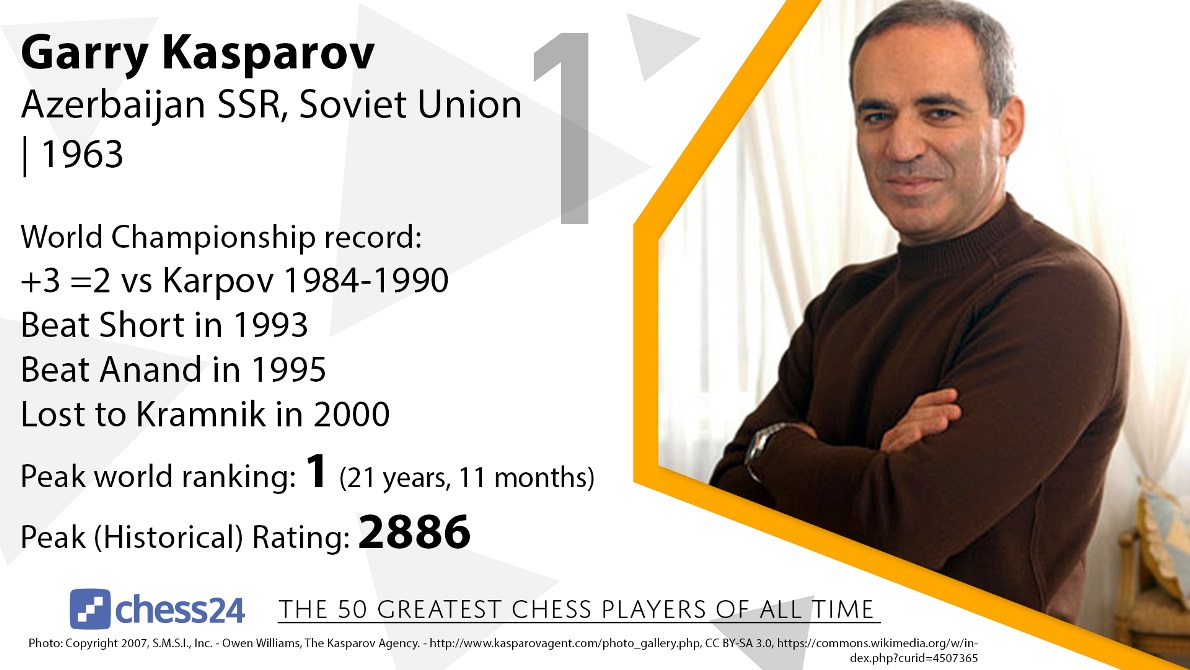 The duo concluded that 13th World Champion Garry Kasparov is the #1 Greatest Player of All Time. Magnus Carlsen, who snatched the World Championship title from Viswanathan Anand in 2013 and defended it in 2014, 2016 and 2018, is #2.

There's just nothing to talk about, it's as simple as that. His World Championship record: five wins, one cancelled match, one drawn match and one loss. Basically six World Championship wins. Then come the world rankings, his 21 years and 11 months as number 1. That's just incredible! He defends his crown against very tough opposition most of the time, and he keeps his world number 1 spot for almost 22 years. He's dominant. At times he's just so much better. There's a famous Bareev quote. "How can it be that Kasparov is 90 points ahead of number two?", and Bareev said, "Yeah, there's something wrong. He should be much further ahead!" It's clear he's the strongest player in the history of time.

As unfair as that might be towards a 29-year-old to have to compete with, in a historical context it matters. Jan and I see it as today being the cut-off - there is no debate.

Many chess fans still consider Bobby Fischer, who became World Champion by beating Boris Spassky in the famous 1972 World Championship match in Reykjavik, as the greatest ever. Gustafsson and Nielsen disagree:

Fischer was an incredible player. That he is "only" no. 3 comes from having won just 1 World Championship match. His dominant run to take the throne was done in an incredible manner, and he was the strongest player in the world for quite some years before that according to Sonas. Which all adds up for us to be enough to get ahead of other multiple champions, but not to surpass Magnus and Kasparov.

In August, Garry Kasparov himself made a statement that generated some debate among chess fans, claiming he faced tougher opposition back when he competed in the 1990s.

I’m not trying to undermine Magnus’ opponents, with all respect to top players today, but I still can hardly see the same competition I experienced, especially in the 90s. Let’s set aside my matches with Karpov and Karpov’s generation, but then I had to compete with the next generation, it’s Vishy, Vasyl Ivanchuk, Borya Gelfand, and then the younger generation of Kramnik, Judit and Peter Svidler. I was still winning tournaments playing younger players and many of them were great players, just mention Vishy and Kramnik, two other World Champions. I’m still not seeing the same competition against Magnus today, and while I thought for a moment about Ding or maybe Caruana, they don’t show the same kind of class and continuity as Vishy or Kramnik 20 or 25 years ago.

Speaking to Tania Sachdev, Carlsen later responded to the comments saying he thinks it's too early to judge in a historical perspective:

I think I am not the right person to answer that. One thing that should be noted is that these things are sort of easier to judge after people's careers are over. There are a lot of people today whose careers are only starting, so to judge them in a historical perspective is not so easy.

Carlsen went on to explain that he is impressed by how well players from the previous generation, such as Viswanathan Anand, Vladimir Kramnik, Boris Gelfand and Vasily Ivanchuk, were able to compete with the much younger players.

Where I am going with this is that you've got to see where the current crop of players compare to the next that is coming up. That's the main takeaway. Before that, it's too early to say. For now, I am just trying to beat whoever is there obviously.

Nielsen: Morphy stands out as the most "odd"

Of the most recent generation, Vladimir Kramnik made it to number 11, while Viswanathan Anand is 9th, ahead of Paul Morphy in 10th, but behind Mikhail Botvinnik in 8th, José Raul Capablanca in 7th and Anatoly Karpov in 6th.

Asked about the most difficult on the list, Nielsen says:

Morphy stands out as the most "odd". One can make a case for number 1, or for considerably lower on the list. Basically he is the "Fischer problem" to the extreme. There is an argument for his being even more dominant, but also that his career was considerably shorter. With him and others there have been varying opinions among the critics. We take it as a good sign that opinions differ in both directions and that we have landed on the reasonable compromise such a list should reflect.

On Sunday November 22nd, Carlsen will join 15 other elite chess stars in the Skilling Open, the first event of the $1.5 million Champions Chess Tour. 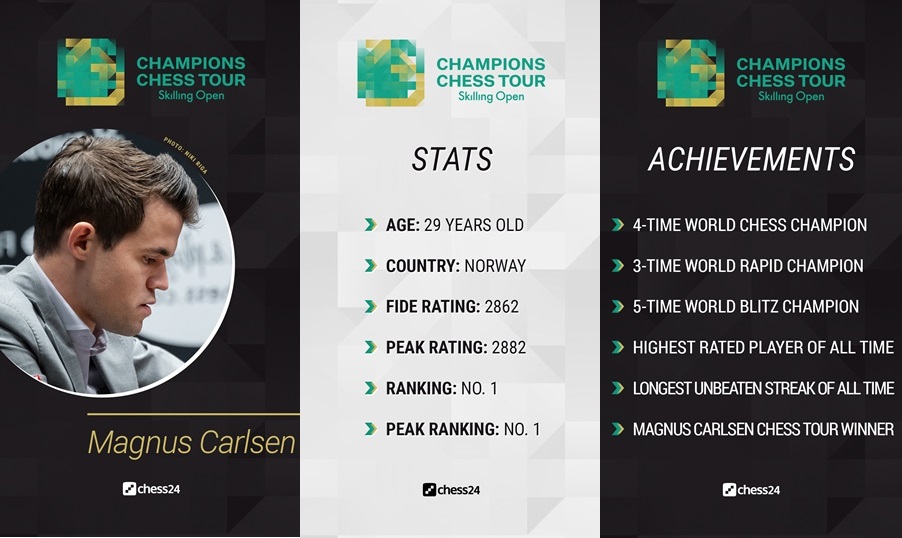 12 of the 16 players have so far been announced:

The event will be broadcast in 9 languages on chess24, but also worldwide to 60 countries via Eurosport and live on television in Norway on the TV 2 channel.