Aleksandra Goryachkina’s desire was met by great defensive tenacity from Ju Wenjun as Game 1 of the 2020 Women’s World Championship match ended in a 97-move draw. It was hard to imagine that outcome when a quiet Catalan opening led to a position which seemed sure to fizzle out, but a couple of inaccuracies from Ju Wenjun led to hours of torture. The reigning champion was up to the task, however, and the 45 moves made by Goryachkina’s queen’s knight were ultimately in vain. Don't miss WIM Ayelén Martínez's video analysis at the end of this report! 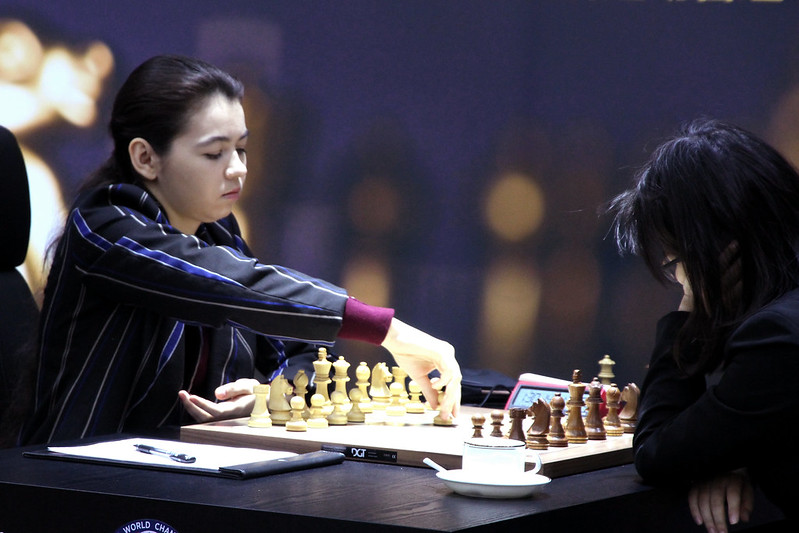 Aleksandra Goryachkina was taking no prisoners at the start of the match | photo: Zhang Yanhong, official website

The 2020 Women’s World Championship match began on Sunday in Shanghai:

You can replay the game – and all the games from the match – using the selector below:

Aleksandra Goryachkina had the white pieces but was surprised on move 4 when Ju Wenjun deviated from her usual choices with 4…Be7. The players then followed a topical line of the Catalan in which one notable game featured Anish Giri beating Dmitry Jakovenko on the way to winning the 2019 Shenzhen Masters:

It was only after 12.Be3 Bb6 13.Bxb6 axb6 that 14.Nxc6!? was a new move, which whatever its objective strength had the value of getting Ju Wenjun to start thinking at the board. 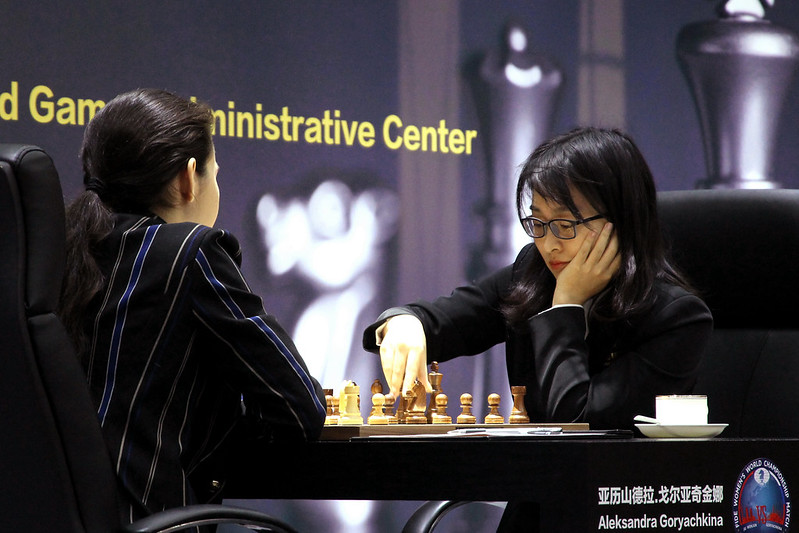 Ju Wenjun looked happy with how things were going early on, but life would get much, much tougher | photo: Zhang Yanhong, official website

Soon a draw seemed almost inevitable, but no draw offers were allowed until move 40, and with time running down the loose 35…Be8!? saw Ju Wenjun get into difficulty. An exchange of rooks on move 44 may not have been Goryachkina’s best option, but she clearly felt there were chances of her knight overcoming Black’s “bad” bishop.

Here we can briefly take a time out to observe the beauty of the “knight’s tour”, a perfect 63-move no-squares-repeated path around the chessboard:

Aleksandra’s version wasn’t quite that harmonious, but here, on the position just after rooks have been exchanged, we’ve imposed the before and after moves of the queen’s knight that began on b1 – in total it made 45 of White’s 97 moves!

The commentating Nigel Short observed that such an approach would have worked against him, as at some point he’d have grown tired and blundered, while Rauf Mamedov, Magnus Carlsen's next Banter Blitz Cup opponent, asked, "Is Goryachkina Magnus in women's chess? She's exhausting her opponent from the very first game!" Ju Wenjun, however, never went astray before the game finally ended in a draw:

We’ve only briefly touched on the game so far, since the newest member of the chess24 team, Argentinian WIM Ayelén Martínez, takes an in-depth look at it in the following video:

Ju Wenjun will have White in Game 2 which starts at 08:30 CET on Monday 6th January. Watch all the action live here on chess24!