Levon Aronian, Richard Rapport and Anish Giri are among the star players competing in the FTX Road to Miami, the 5th event on the $1.6 million Meltwater Champions Chess Tour. The 16-player tournament starting on chess24 this Sunday, July 10th is a prelude to the 2nd Major of the Tour, the FTX Crypto Cup, which will be held in Miami, Florida, with World Champion Magnus Carlsen returning and a $210,000 prize fund plus a $100,000 Bitcoin bonus.

The FTX Road to Miami line-up 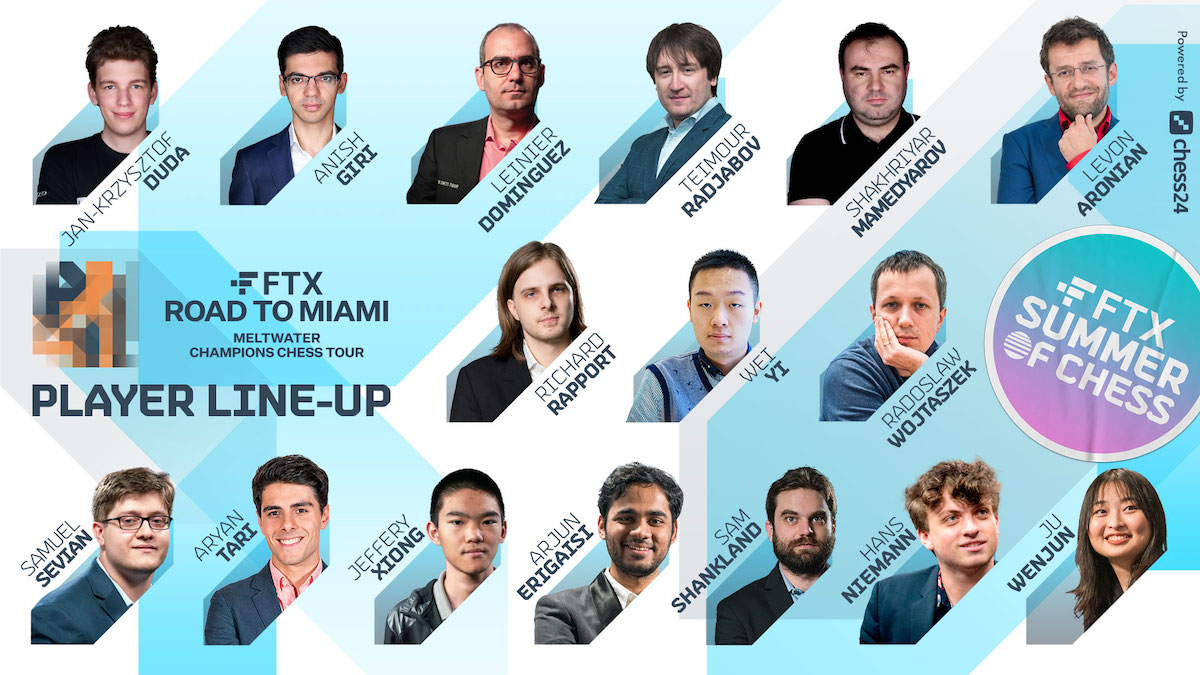 The FIDE Candidates Tournament is barely over, but the big events just keep on coming. The 5th stage of the Meltwater Champions Chess Tour, the FTX Road to Miami, starts at 18:00 CEST on Sunday July 10th, with Levon Aronian top seed. Here are his Day 1 pairings. 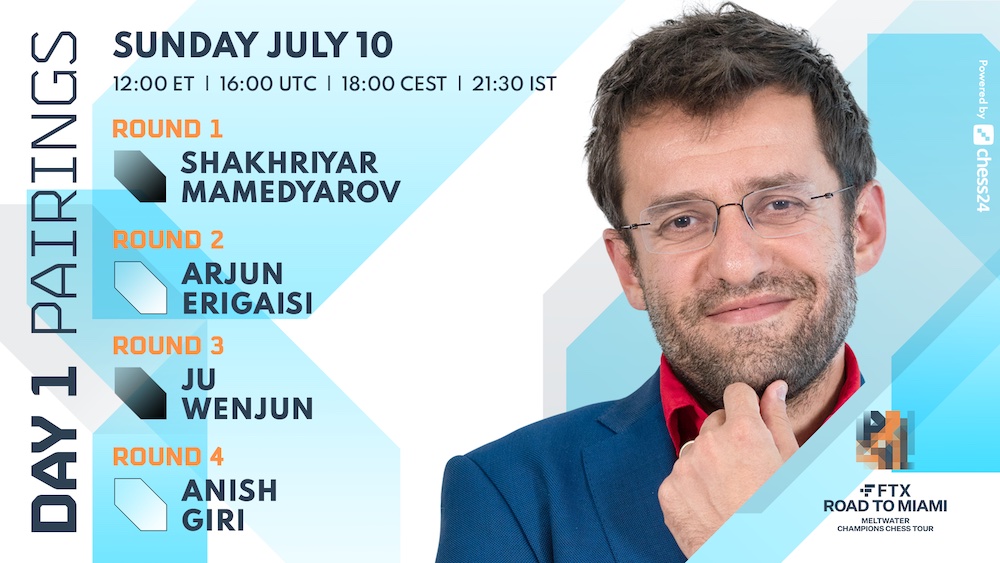 The field features three of the Candidates — Teimour Radjabov, Richard Rapport and Jan-Krzysztof Duda, while Radoslaw Wojtaszek is making his tour debut alongside young US stars Jeffery Xiong and Sam Sevian. In fact there are no less than six US players, including Leinier Dominguez, Sam Shankland and 19-year-old Hans Niemann.

Check out the full pairings for all 15 rounds of the preliminary stage of the $150,000 tournament below.

The 16 players will then be cut to just 8 on Wednesday, before the quarterfinals begin. 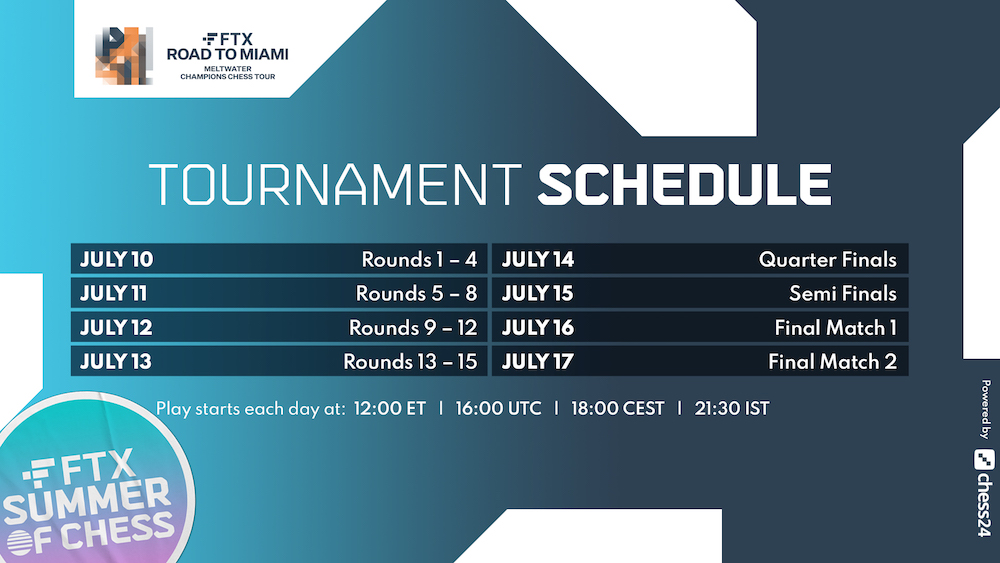 Why the FTX Road to Miami?

The FTX Road to Miami is a warm up to the Meltwater Champions Chess Tour’s first big event on US soil, the FTX Crypto Cup. 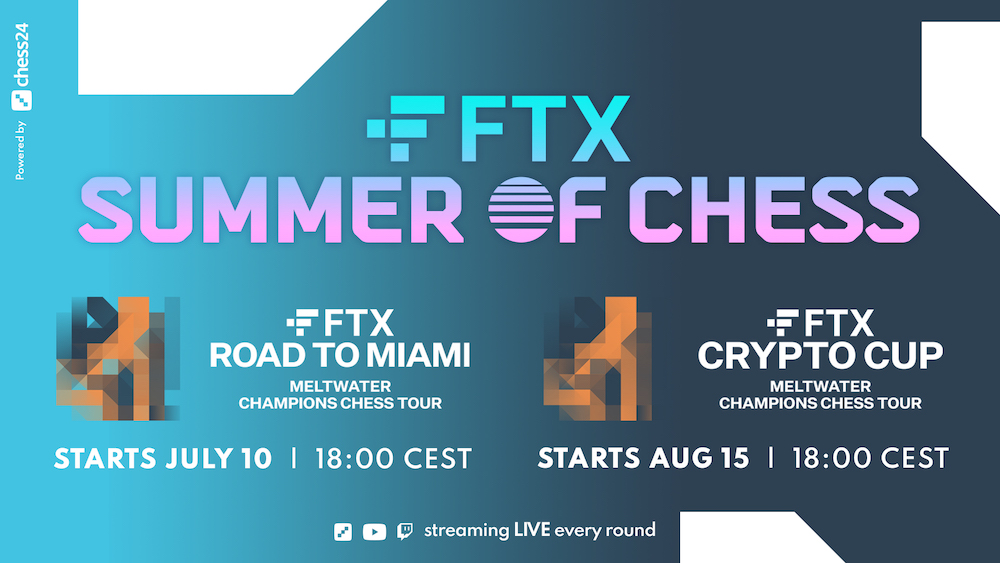 The 8-player FTX Crypto Cup will be held in the Eden Roc Miami Beach Hotel in Miami, Florida from August 15-21. 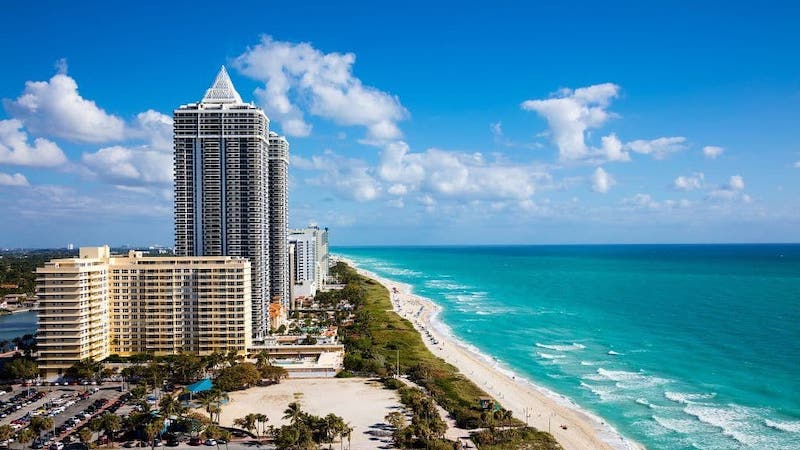 A new venue for the Meltwater Champions Chess Tour!

Magnus Carlsen's victory over Wesley So in the inaugural FTX Crypto Cup was his first on the 2021 Meltwater Champions Chess Tour, and featured an epic reaction.

Magnus, currently leading the 2022 Tour, will be back for the 2nd edition of the FTX Crypto Cup, with world no. 2 Ding Liren and 16-year-old Indian prodigy Praggnanandhaa also earning a spot after reaching the final of the Chessable Masters. They’ll be joined by the Top 2 in the FTX Road to Miami, another Tour qualifier, and two wildcards. 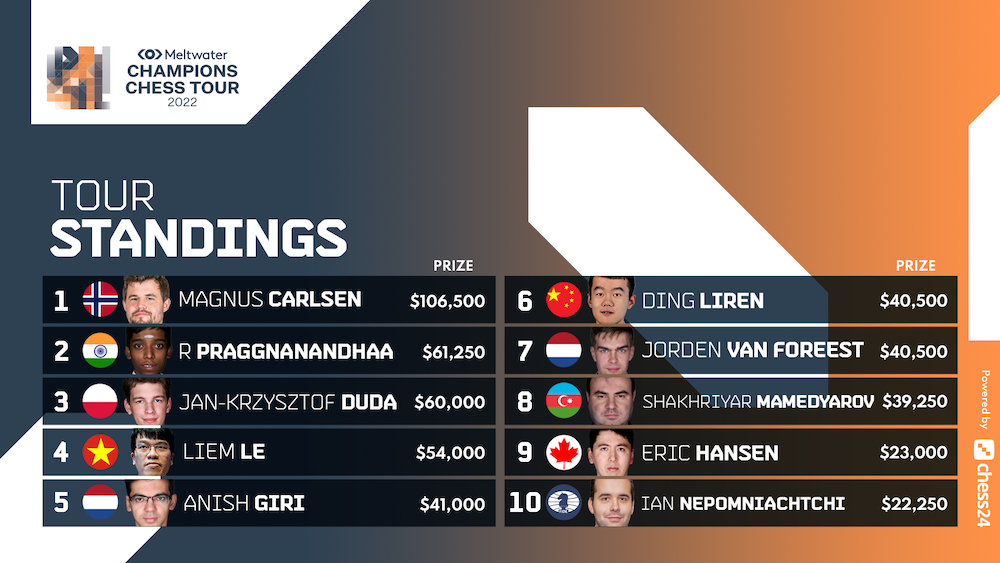 Magnus Carlsen has a big lead on the overall tour standings, though he skips the FTX Road to Miami while competing in the WSOP in Las Vegas

The FTX Road to Miami and the FTX Crypto Cup are made possible by leading cryptocurrency exchange FTX, which for the event in Miami is adding a $100,000 bitcoin bonus to the standard $210,000 Major prize fund.

The 2021 edition of the FTX Crypto Cup received the highest press coverage of the Tour at that time, and highlighted the natural intersection of the two passionate chess and crypto communities in a thrilling tournament that saw Magnus win his first Tour event, and first of its kind integrations for both chess and sports. We are thrilled FTX has agreed to continue to expand their presence in chess by funding a physical event in Miami unlike any other before-seen chess tournament.

Chess is a game open to everyone and anyone, much like blockchain technology, which provides financial opportunities to everyone from those on the institutional-scale to the unbanked. It will be fascinating to see how the players continue to innovate, as we always strive to do at FTX, and push the game forward during the Crypto Cup in Miami. 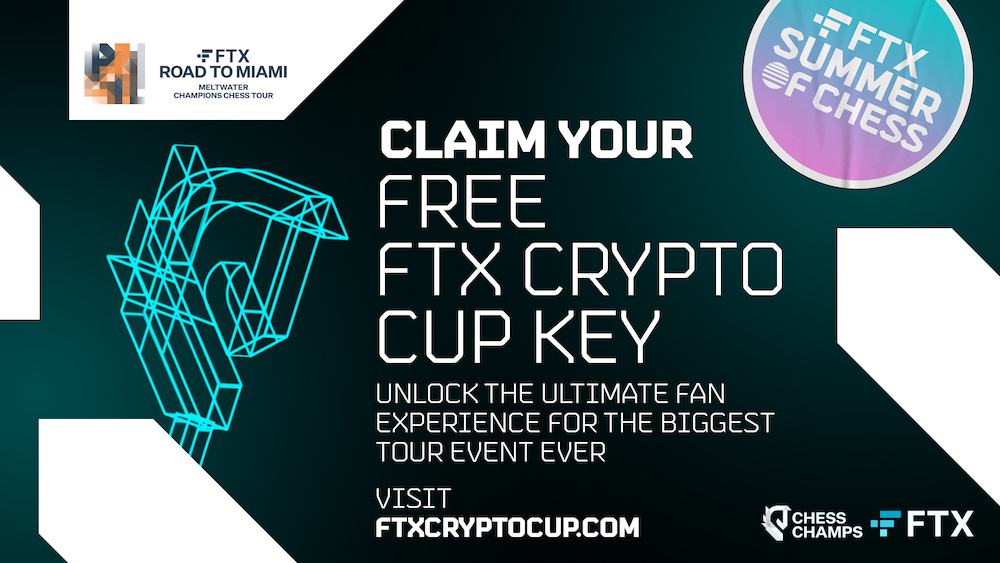 Chess fans will get the chance to get involved, since as part of the FTX Crypto Cup an exclusive key will be offered for free that will unlock unique fan experiences, including fantasy challenges, chess activities and giveaways, with $100K in rewards and prizes distributed throughout the summer and during the tournament. Anyone can claim the key for free by visiting:

Where can I watch the FTX Road to Miami?

Once again you can watch all the action here on chess24, with the beginner-friendly show from our Oslo studio… 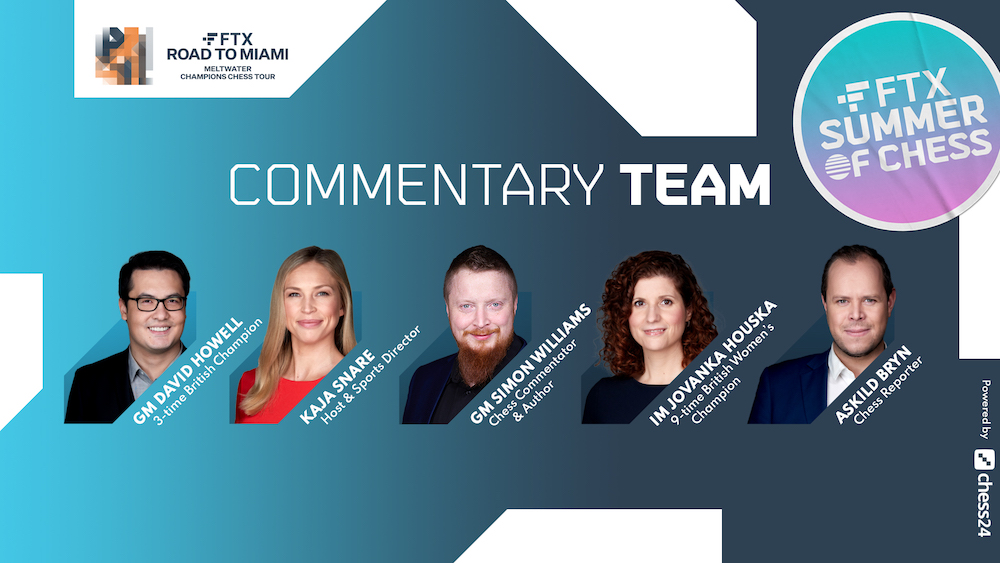 …or with Peter Leko, who is this time joined by Lawrence Trent. 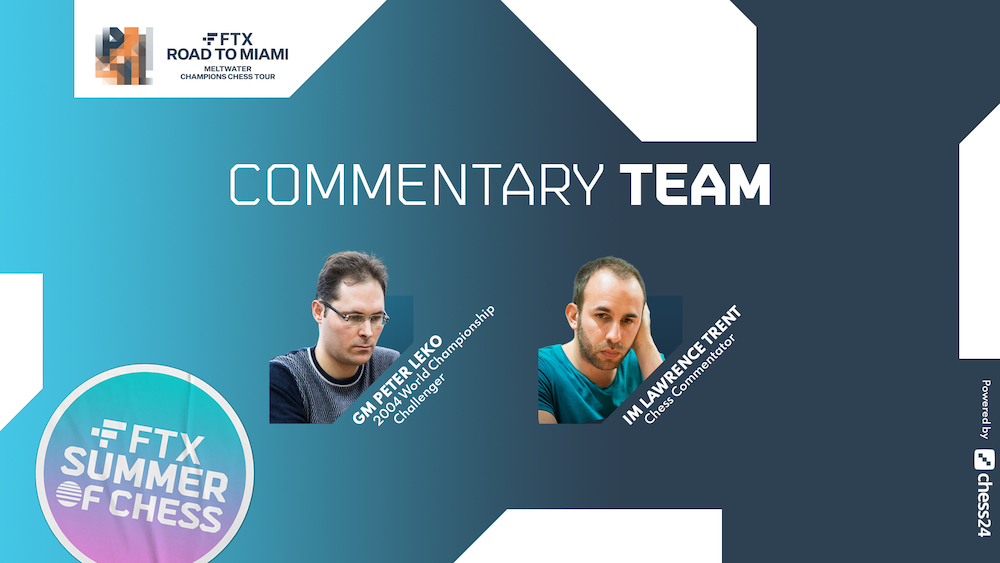