From Garry to Giri: Guest by test

Doing the live broadcast from the Chess Olympiad was a blast!

One big change from our previous shows was the luxury of having some of the world's best players - and David Smerdon - joining the programme. 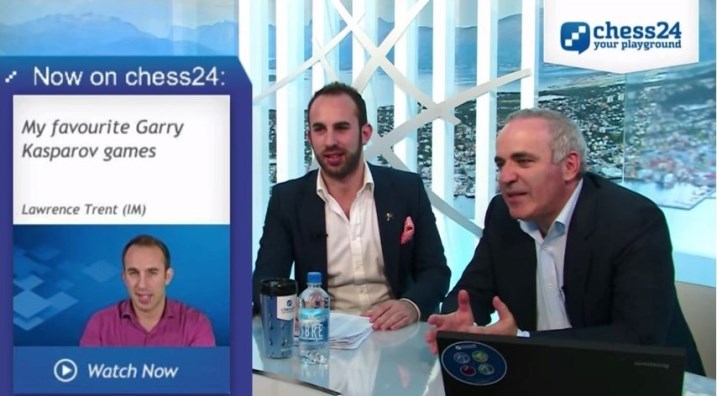 Now of course, having guests on the show is a double-edged sword for narcissists like myself.

After all, they do take away valuable screen time that could have been used for saying, "It ain't over 'til it's over," "A pawn IS a pawn", reading out a Houdini line and pretending I thought of it myself, discussing the genius of "Curb Your Enthusiasm" with Trent and so on.

However, gotta think of the viewers once in a while as well. Having the greats explain their games and share their thoughts on the show did make things a lot more interesting and it truly was a pleasure to have them stop by.

With the Olympiad gone, I feel it's a good time to revisit some of the memorable appearances, in no particular order. Well, mainly in order of ratings and world championships.

Gotta start with the boss! This is the one where I got the most nervous. After all, normally we didn't know the guests way in advance, they just stepped into the studio.

All of a sudden, Garry walked in! I don't really know him and had never played against or even spoken to the legend. Kasparov-Karpov 1990 in Lyon and New York is the first chess event I followed and my first chess book was called "Kasparov's Chess Openings" a bit before that. Gotta admit I didn't stay loyal to the King's Indian for long...

Of course I have followed his games and read all his books since. While I might be less of a fanboy of his chess style than Lawrence, it was still a big moment for us.

Garry made it easy, though! Once the politics was out of the way he stayed for a long time and his passion for chess took over. The guy can play! And to see how much he still enjoys chess was truly inspiring.

The guy who dethroned Kasparov in 2000 was my chess hero growing up. Being more of a 1.d4 guy and an opening geek myself, I was always impressed by the amount of ideas Kramnik has contributed to the game.

The Berlin, the Petroff, the Catalan, the 9.b4 King's Indian - I feel like Kramnik's influence on the way top level chess has been played in the last two decades cannot be overstated.

On another important note, we were both born on June 25th.

And Kramnik had a good reason to stop by, giving his account of how he beat his old rival Veselin Topalov.

Topalov's style has always been too dynamic for me to understand. Amazing preparation and incredible calculation made him a chess juggernaut in the 2000s. On the show he sounded a bit sentimental and didn't seem to like his chances of taking another run at the highest title.

His play during the Olympiad said differently!

The sad news, however, for chess fans all over the world, was that the greatest female player of all time announced her retirement towards the end of the tournament.

To appreciate how far ahead Judit was of everybody else, check out this graph.

No hint of that on the show! Judit not only showed a great game full of crazy tactics, but also didn't rule out the possibility of a Hou Yifan match.

I still wanna see that one.

‌‌Let's stay in Hungary for a while. My ex-boss Peter Leko is not only the man who came within one game of the world championship title in Brissago 2004 and is still one of the strongest players around.

He's also one of the best commentators out there!

The way he's able to explain his games really shows us the amount of work, calculation and skill that goes into 2700+ chess.

His win against Wang Yue also happens to be the only individual game the Chinese lost en route to their gold medal.

The 20-year-old Dutchman with Nepalese-Russian roots is one of the heroes of our show. Not only because he's 2757 and currently Number 11 in the world. He's just a great source of entertainment. A great player, an excellent writer - I'll even give New in Chess a plug because I really enjoy Anish's annotations in the magazine - a great hashtag expert. We're rooting for him.

Obviously we're too immature to express our admiration in any way other than through insults.

‌We've called Giri a pretentious whippersnapper, questioned his play whenever possible and have an ongoing feud with his evil girlfriend Sopiko - no-one had more reason to boycott the show, Magnus Carlsen-style, than Anish. So him showing up on the first day did mean a lot!

Ok, Norm wasn't on our show.


However, I can't write an article about great guests without including the greatest talk show guest of all time. That's not my opinion, it's a fact. It's also one of the few pop culture areas where I disagree with Lawrence Trent.

For all our differences, Lawrence and I tend to have very similar taste when it comes to movies, TV shows and comedy. How he cannot see the genius of Norm MacDonald is puzzling to me. Not appreciating the two bishops, sure. But Norm?

I have come around to thinking that having great guests might be almost as good as trashing Gravity. Then again, Gravity is a horrible, horrible movie.

It truly has been an honour, thank you everybody!