Parviz Gasimov, a 14-year-old from Azerbaijan, has managed the incredible feat of going from a 1949 rating in October 2014 to 2517 in the first rating list of 2015 – no less than a leap of 568 points in three months. Spanish IM David Martinez takes a look at how this “miracle” occurred. 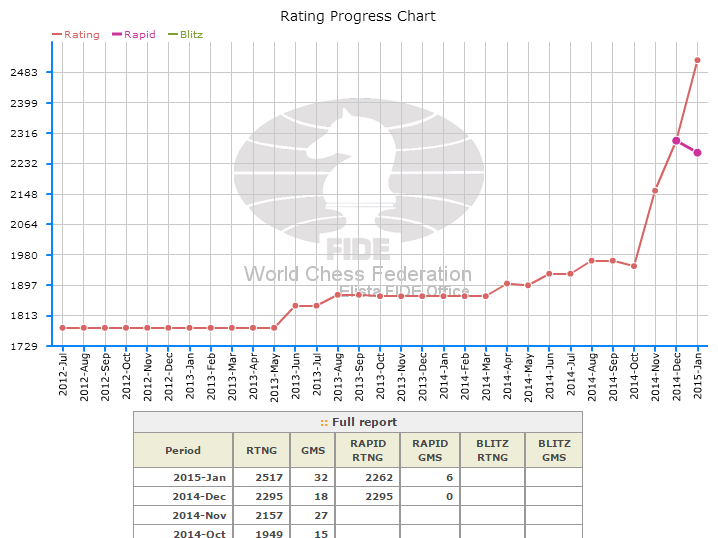 A normal rating graph for a teenager… until the final three months! | source: FIDE

Up until October Parviz Gasimov’s level of play was nothing out of the ordinary. He operated in 1900-level tournaments and for his November rating three such events were taken into account. The first two were relatively normal – a junior event in Dubai, where he gained a single point and another in Nakhchivan (Azerbaijan) where he lost four. However, he then took part in the European U14 Championship in Batumi, Georgia, where he sprung one of the surprises of the tournament to claim bronze despite starting seeded as only no. 58. He gained a whopping 211 Elo points in the process!

It’s important to note that for juniors aged up to 18 with a rating below 2300 the “K factor” is 40, so that every point they gain beyond the expected result based on their rating is multiplied by 40 (before the changes approved by FIDE over the summer it was only 15). In Batumi Parviz scored 5.27 more points than expected, which when multiplied by 40 gives that remarkable 211 points.

Let’s take a look at his results:

As you can see, Parviz scored a brilliant 7/9 against opponents who outrated him by 200 points, for a 2426 performance rating - better even than that of those who scored 7.5 and placed above him on the podium. 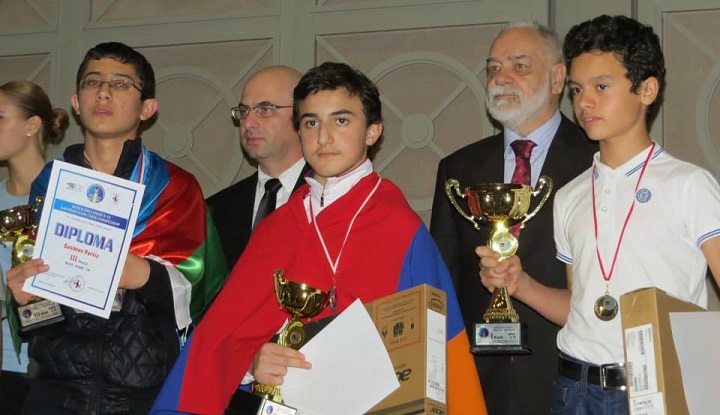 Parviz, in glasses on the left, at the closing ceremony of the European Youth Championship in Batumi | photo: Sophie Nikoladze, official Facebook page

The level Parviz demonstrated in the tournament was already high and much superior to his 1900 rating, as can be seen from his final round game:

16... ♗a5 Allowing White to open the f-file. Black could have aimed for counterplay with

17. fxe6 fxe6 18. ♖d3 Swinging the rook into the attack. A more aggressive option was

20. ♘f3 immediately was better, but Parviz eventually plays it a couple of moves later.

24. h3 is the silicon recommendation, but it was normal to reject that due to 24... ♕h5 when it seems that Black is doing well. However 25. ♕d4 would have exposed problems in the black position.

26. ♘c3 ♗xc3? Accepting a passive position. Nikitenko should have undermined the white pawn structure with

26... b5 and three results would definitely still be possible! The rook is about to enter on the c-file and Black should have compensation for the material deficit.

30. h3 was again an option. 30... ♖xe4 would be met by 31. ♕d1 and the white pieces could try to coordinate without having to worry too much about their king.

31... ♕xb3? A mistake which allows White to finish off the game. Black should first have included

After that event Parviz had climbed to 2157, but his surge didn’t end there. In a stunning November he managed to score 17/18 in two low-level tournaments.

First he played in Tula, where he scored 8/9 against opponents with an average rating of 2066. He lost to only one opponent and added 98 rating points. The following table shows his individual results and also how his rating changed after each game:

After that he scored 9/9 in another tournament, although he had clearly outgrown the opposition. Some of his opponents averaged 1400-1500 while his toughest rivals were rated 1950, 1892 and 1787. That enabled him to add another 39.6 points.

So after a great November Parviz still had the perfect Elo for another great leap. 2295 (below the 2300 barrier) maintained his K factor of 40.

When we look at the tournaments included in the calculations for the January list we’re surprised to find a tournament that Parviz played in August. In that event he scored well for that moment in time – 6/8 against opponents rating on average 1868, to gain 40 points, since his rating then was only 1964! You can’t deny, therefore, that bureaucracy also played a role in Parviz having an extended period with a K factor of 40.

The final spectacular leap came in the local Russian Championship in Aleksin. Played over 15 rounds at the start of November, Parviz defended a rating of 2157 against opposition rated on average 2122… and scored 12.5! That was 4.34 points more than expected and another 173.6 points spectacularly added on to his tally. Let’s take yet another look at his results game by game and how they affected his rating:

Parviz finished by playing in the Al-Ain Open in the United Arab Emirates in December, where he defended his 2295 rating with a strong 5/9 against 2244 rated opposition, although that only gained him 7 rating points.

What can we say about this?

On the one hand the controversial K factor of 40 has led to enormous rating variations for many young players. It seems to me that the K factor should be reduced much sooner, when you reach around 2000 or at the very latest 2100. It's become somewhat common for promising teens to reach master or grandmaster level before their real strength merits those titles.

In this case, though, Parviz not only took advantage of such a high K factor but also demonstrated a spectacular improvement in his chess level in only a few months. What’s his real strength? Will he be capable of maintaining such a high Elo? It’s difficult to imagine he’ll manage to play at a 2500 level just now, though his current strength does seem far greater than the 1900 level he had three months ago. What was behind such a leap?

We’ll have to watch out for Gasimov in his upcoming tournaments to see if he’s capable of holding on at this level or not. On the internet you can find all kinds of theories and discussions about his achievement. What’s yours?