French Top 12 gets off to fighting start

David Navara, Arkadij Naiditsch and Grzegorz Gajewski were among the well-known players to taste defeat as the Top 12 French Team Championship got off to a fighting start in Chartres on Thursday. The 11-round event is one of the world’s strongest national team tournaments and may get stronger if the likes of Maxime Vachier-Lagarave, Paco Vallejo and Teimour Radjabov show up to represent their teams in the latter stages. 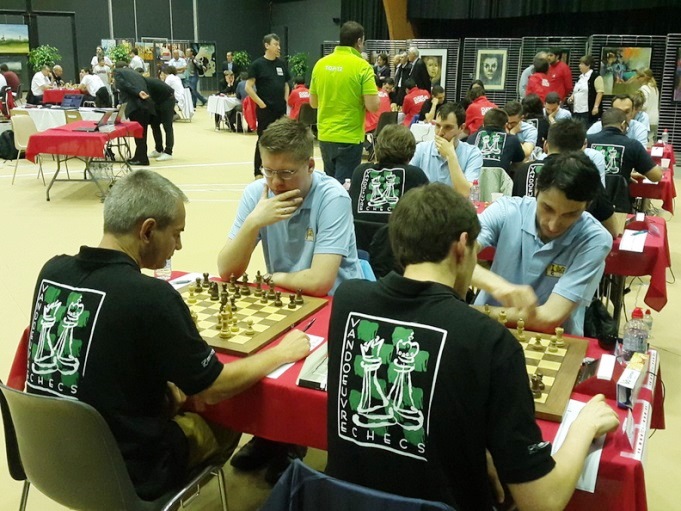 Tremblay's Malakhov and Jobava were both held to draws in Round 1 | photo: official website

Chartres, a city to the southwest of Paris, is best known for its huge Gothic cathedral, but from 18-28 May its Exhibition Centre is hosting 80 grandmasters from 30 countries for the Top 12 of the French Team Championship.

You can get a glimpse of the atmosphere in this first round video by the French Chess Federation:

The event is a round-robin featuring six matches held across eight boards each day, with all the games live here on chess24. Although there were no match upsets on Day 1, the top seeds Clichy, hunting a 15th title, and Bischwiller, last year's runners up and Champions in 2015, both had to fight their way to victory. Click on a game below to replay it with computer analysis:

Although 2nd seeds Bischwiller beat Mulhouse 5.5:1.5 (or 4:1 using the system for the event that discounts draws), it was a very tricky match. On top board Maxim Rodshtein, who dropped almost 20 rating points in a disastrous showing at the Russian Team Championship recently, was facing the formidable David Navara. 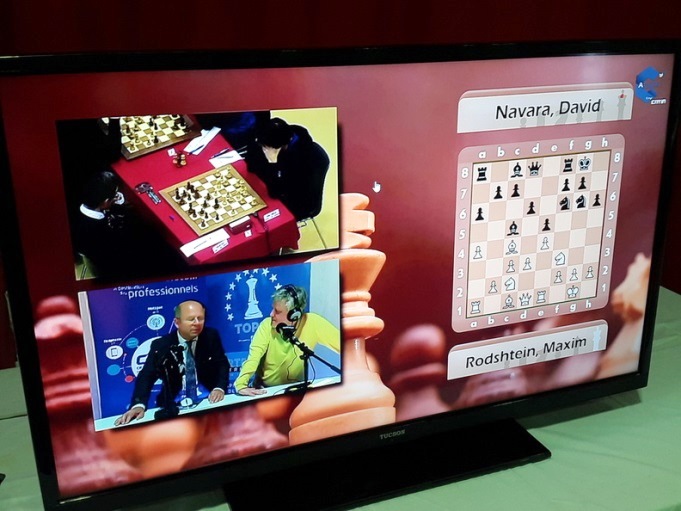 The top-rated player in action in the first round was beaten | photo: official website

At some point the Czech Champion was doing very well, but then he overpressed and found himself in dire straits:

33.Rxf3! exf3 34.Qd3! and the black king was in a mating net it could escape only at the cost of heavy material losses.

Markus Ragger increased Bischwiller’s advantage by winning an epic game with the black pieces against Vishy Anand’s second Grzegorz Gajewski, though the most memorable moment may have been a trick he missed: 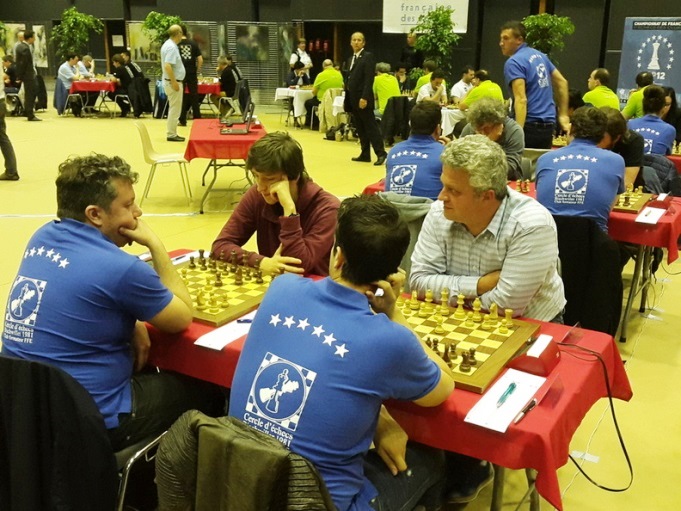 While that game featured swings it was nothing compared to Naiditsch-Gledura, where Arkadij Naiditsch had a winning edge:

Loek van Wely found himself in the unusual position of being 20 years younger than his opponent | photo: official website

In the other key match for the title the first four boards were drawn before Loek van Wely triumphed on Board 5 for title favourites Clichy. He grabbed a pawn on b7 against veteran Iossif Dorfman, a decision that looked risky after 11…f6:

Black is threatening to pick up the queen with Rf7 next move, but Loek had prepared 12.d5!, when 12…Rf7 would now be met by 13.Bxb6!, hitting the black queen. In the game there followed 12…cxd5 and eventually Loek went on to show fine technique to win an endgame. 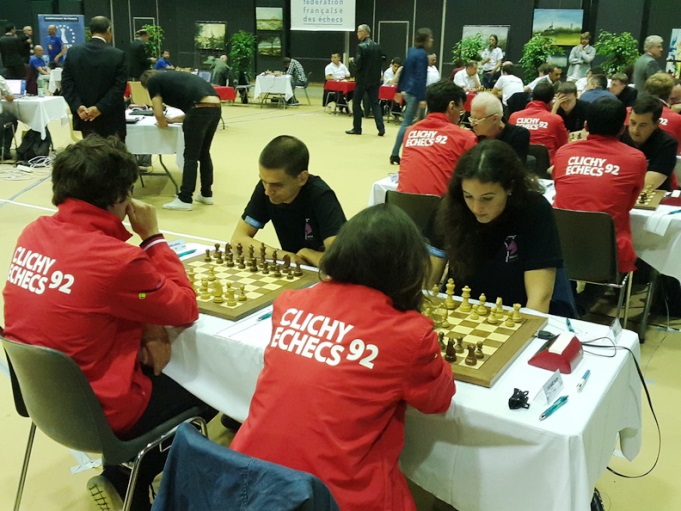 The Clichy match was decided on the bottom boards | photo: official website

Camille went for the immediate 30.h5??, but after 30…Rb2! it was too late to defend with 31.Rc1 due to Black upping the pressure still further with 31…Rc8. 32.hxg6 threatened mate-in-1, but it was mate-in-6 for her opponent. Instead of all those woes Camille could have displaced the black king with 30.Ra1 and the game would have gone on.

Although there were no real shocks elsewhere, Vandoeuvre ran Tremblay much closer than anyone could have imagined. The fearsome top three of Malakhov, Jobava and Piorun were held to draws by players 100-200 points lower rated, and in fact only the bottom three boards saw decisive results, with two wins for Tremblay to one for Vandoeuvre. The name that stands out there is Vandoeuvre’s Fiona Steil-Antoni, who is probably the most active player in the event on social media:

No-one said it was going to be easy... | photo: official website

Alas, things didn’t go entirely to plan against her 320-point higher-rated opponent, so instead of the game let’s take a look at how she prepared for the event in an idyllic Corsican setting:

The games start each day at 14:30 CEST, and can all be followed live here on chess24. You can also watch the games in our free apps: