Alireza Firouzja will have the white pieces against World Chess Champion Magnus Carlsen as the 8th edition of Norway Chess begins today at 17:00 CEST/11:00 ET. We'll also have Tari-Rapport, while Nepomniachtchi-Karjakin has been postponed to the rest day on September 11th after World Championship Challenger Ian Nepomniachtchi struggled with visa issues. Judit Polgar and Jovanka Houska will commentate live here on chess24. 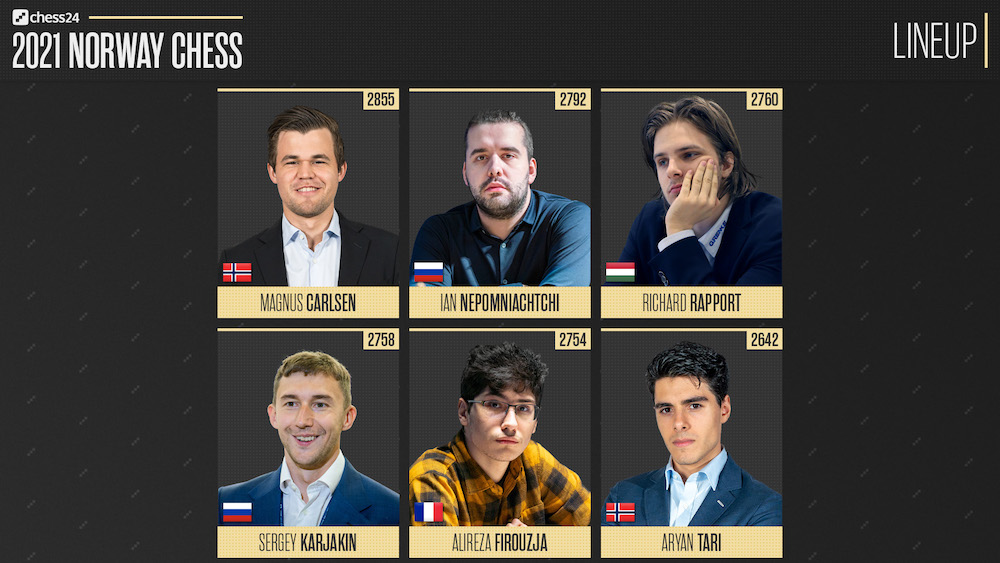 The 2021 edition of Norway Chess was originally announced as a 10-player tournament to be held in May, featuring the likes of Fabiano Caruana, Ding Liren, Levon Aronian, Shakhriyar Mamedyarov, Wesley So and Maxime Vachier-Lagrave. Those plans were defeated by COVID travel restrictions, so that in the end the tournament was postponed until now and is being held as a 6-player double round-robin, as in 2020.

The format remains unchanged from 2020, with the players once again competing first in classical chess, with 3 points for a win and 0 points for a loss. The classical games have the unique time control of 2 hours per player for all moves, with no increment until after move 40, when only 10 seconds will be added per move.

If the classical game is a draw the players play an Armageddon game, where White has 10 minutes to Black’s 7, but a draw counts as a win for Black. The winner gets 1.5 points and the loser 1 point.

The pairings are out, with Magnus Carlsen meeting his World Championship Challenger Ian Nepomniachtchi in Rounds 4 and 10 (the final round).

Although Nepomniachtchi is paired to play Sergey Karjakin in Round 1, that game will in fact only be played on the September 11th rest day, since Ian Nepomniachtchi was unable to fly on his planned flight to Norway. He’s now been granted a new last-minute visa, but will only arrive in time for Round 2. 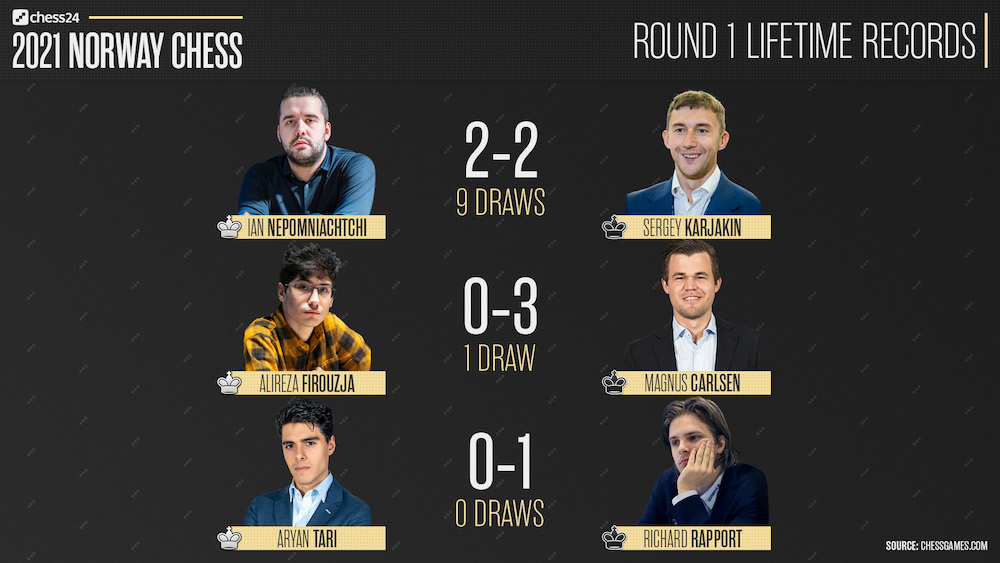 Can Firouzja score a 1st classical win against the World Champion?

The big match-up in Round 1 will therefore be Firouzja vs. Carlsen, a clash we were close to getting to see in the final of the Aimchess US Rapid, an event during which Alireza checkmated Magnus in the Prelims.

It’s also a clash between the players who finished in the top two spots in last year’s Norway Chess. Magnus in fact claimed victory with a round to spare by beating Firouzja, but the World Champion’s loss in the final round meant that Alireza matched the 6.5/10 classical score of Magnus (as did Levon Aronian), but finished 1 point behind based on Armageddon results.

In the absence of Levon Aronian, Magnus now becomes the only player to have played in all eight editions of Norway Chess, and he’s chasing a 3rd title in a row and a 4th overall.

18-year-old Alireza Firouzja is immensely ambitious, however, and is sure to be out for blood. Magnus quoted words from the late Michael K. Williams, playing Omar Little in The Wire, that could also be applied to the upcoming game.

Ian Nepomniachtchi will of course also be a focus of attention as we try to gauge his form in the run-up to the World Championship match this November.

Sergey Karjakin had faded from the chess scene since his 2016 World Championship match, but he’s on a 5-year high after reaching the final of the FIDE World Cup and qualifying for the Candidates Tournament.

Norway Chess is one of his favourite old stomping grounds after he won the first two editions of the tournament.

Norwegian no. 2 Aryan Tari will be trying to exorcise the memory of last year’s tournament, where he lost 7 games and drew the remaining 3 in classical chess, though for instance his performance in Wijk aan Zee earlier this year (1 win, 10 draws, 2 losses) shows he can live with the very best players.

For Richard Rapport it’s a chance to break into the Top 10 (he’s currently no. 13, just 3 points behind no. 10 Radjabov) and continue the good form he showed when he was invited to play on the Grand Chess Tour. 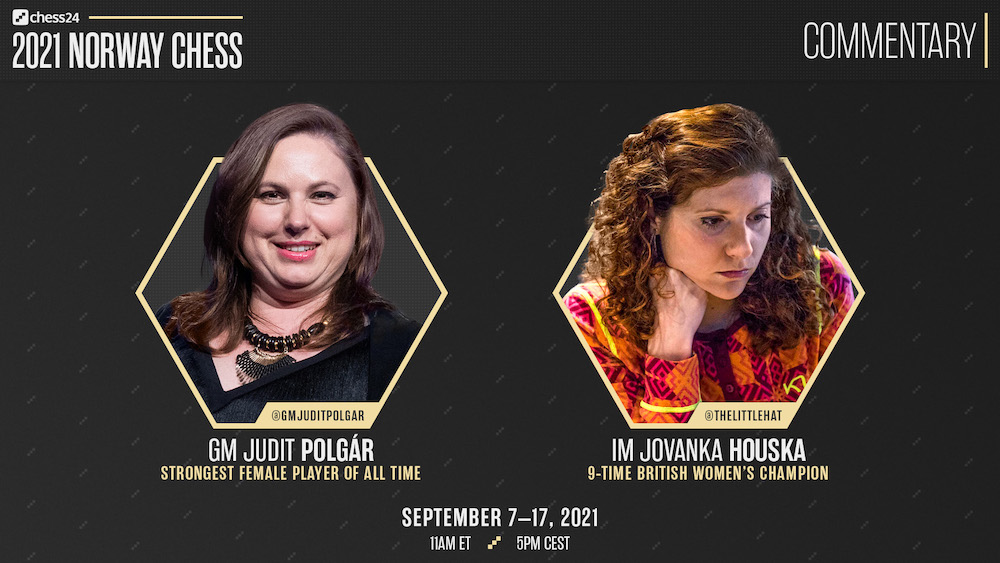 Whatever happens, it’s going to be an intriguing tournament, and we have a fantastic commentary line-up, starting with the greatest female player of all time, Judit Polgar, and 9-time British Women’s Chess Champion Jovanka Houska. David Howell will also be among the players joining for commentary on later rounds.