Filatov claims Kasparov is coaching the US team

The mind games before the 2016 Olympiad in Baku have begun in earnest, with billionaire Russian Chess Federation President Andrei Filatov speculating over whether Garry Kasparov will travel to Baku with the US team or “remain behind the scenes”. Filatov claims the US team with Nakamura, Caruana and So are now the no. 1 seeds and is expecting a tough battle as Russia tries to win the Olympiad for the first time since Kasparov led them to triumph in 2002. 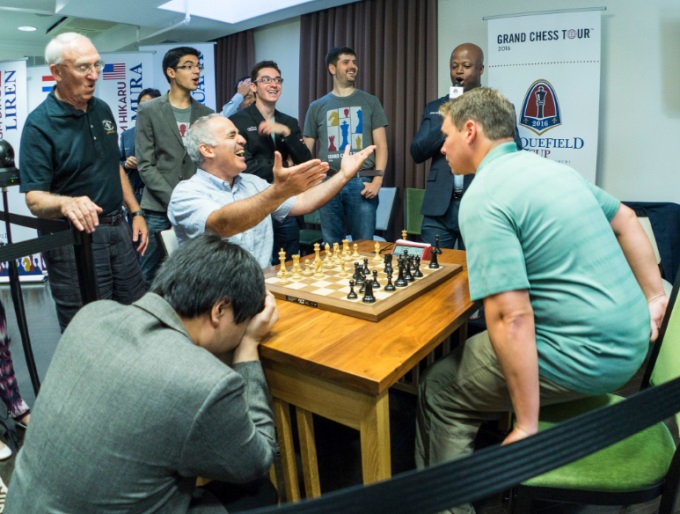 Kasparov played alongside So, Caruana and Nakamura in St. Louis recently, but did he stick around to coach the US team? | photo: Lennart Ootes

Andrei Filatov, who studied chess with Boris Gelfand and Ilya Smirin in Minsk before switching to business, has decided to take a hands-on approach to the 2016 Olympiad that starts on Friday - as captain of the men’s team. It is, as ever, formidable, even if chess24 can’t be alone in regretting the absence of Peter Svidler, the no. 4 ranked Russian player:

We’re focused only on winning the Olympiad and have prepared surprises for our opponents, but we’re not going to try and guess how many matches we need to win for victory. We’ll play each match at full strength. The decision on the board order has been taken, but we’re not going to reveal it until the last moment. Am I satisfied with the team’s preparation? I can only be satisfied if it brings a result, and then we’ll be able to assess how effective the preparation was. For now I can only say that all the chess players are healthy and outwardly look good.

The USA team is now the no. 1 in terms of ratings – the strongest team. Our Chinese friends are the defending champions. The French team is very strong and the Azerbaijan team is also a good and bold team. In general, all the teams are very strong, and it’s just a shame that our Armenian friends won’t be there for political reasons. The Norwegian team is very strong and might spring a surprise on anyone. All the teams have good chances of winning and I don’t see weak teams. Any team could beat any other.

The Americans are very aggressively focused – only victory. And the main intrigue is whether Kasparov will come as team captain to his home city of Baku? After all, there was information that he’s been training the USA team before the Olympiad and played training games with the players. Or will he remain behind the scenes? 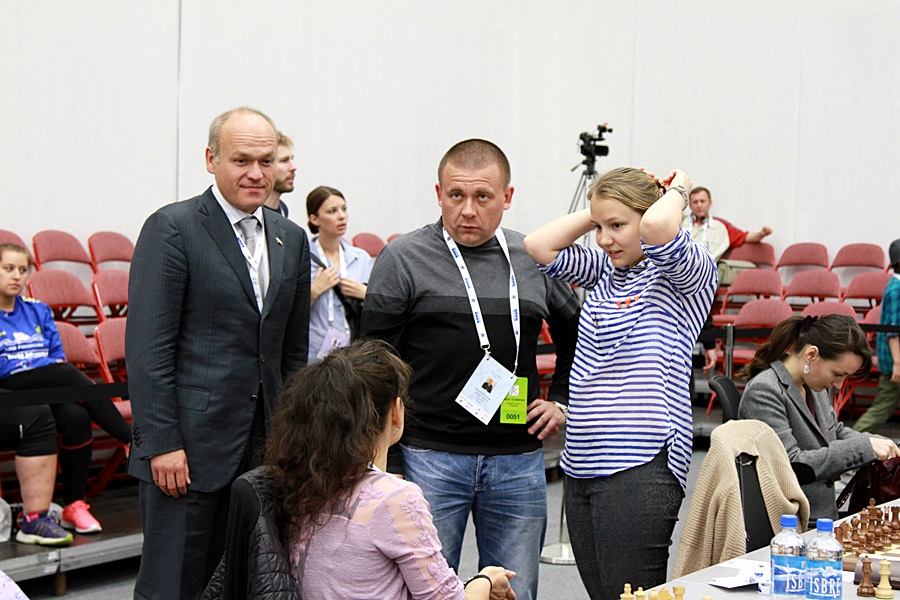 Filatov is no stranger to controversy, with his proposal that anyone could challenge the World Champion if they were willing to pay (he mentioned Bill Gates…) the subject of a petition by the Association of Chess Professionals.

On this occasion his words seem like a provocation. For starters, Russia will be top seeds, as they’ve been for the last six unsuccessful Olympiads, even if the new September rating list slightly closes the gap (Shankland will leapfrog Robson):

It’s highly unlikely that Garry Kasparov would choose to travel to Baku, but in any case it wouldn’t be as team captain, since that role has once again been assigned to IM John Donaldson, with GM Alex Lenderman as coach. Donaldson writes of the US team in his preview for the US Chess Federation website:

This team will be ranked second right behind Russia (Vladimir Kramnik, Sergey Karjakin, Alexander Grischuk, Ian Nepomniachtchi and Evgeny Tomashevsky) and just ahead of defending Olympiad champions China (Ding Liren, Li Chao, Wang Yue, Yu Yangyi and Wei Yi), but there will be no shortage of contenders fighting for the medals. Host Azerbaijan (twice European champions) and averaging over 2700 per board, will be looking to finish on the podium for the first time in an Olympiad.

Other top teams include Ukraine, Hungary, Poland, France, India and England all of whom will have their chances in the 11 round event which has a record 180 countries competing in the Open competition. Match scoring (+2 for a win, +1 for a draw and 0 for a loss) makes it hard to separate teams and often a single mistake can significantly affect the overall result.

One need only look at the performance of Russia in the post Kasparov years to realize how hard it is to win an Olympiad and that there are no guarantees. Top seed every Olympiad from 2004-2014 and with great players, high motivation, excellent support and generous incentives Russia nonetheless won no gold medals. 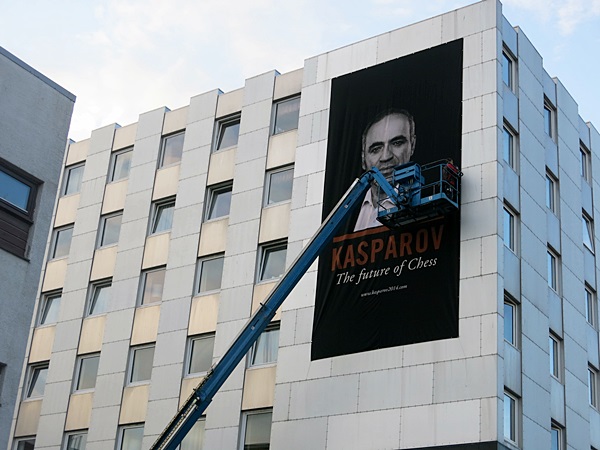 Kasparov of course attended the last Olympiad, where he was running for the role of FIDE President - Filatov was instrumental in ensuring Kirsan Ilyumzhinov instead retained the job | photo: Georgios Souleidis

It’s going to be intriguing to see if the US can help extend that unfortunate streak, with the world’s political superpowers (don’t forget defending champions China) set to fight it out on the chessboard. All the action will be live here on chess24 (and on the official website), from 15:00 local time (13:00 CEST) on Friday 2nd September. With commentary in five languages, you won't want to miss it!