Fight Like Magnus: The Sicilian | New course gets World Champion’s stamp of approval

World Chess Champion Magnus Carlsen has taken the rare step of personally approving a new course modelled on his openings. Fight Like Magnus: The Sicilian by Christof Sielecki is a complete repertoire against 1.e4 based on Carlsen’s 1...c5 and his pet Sveshnikov line - and we’re offering a free download so you can try it (see more below). 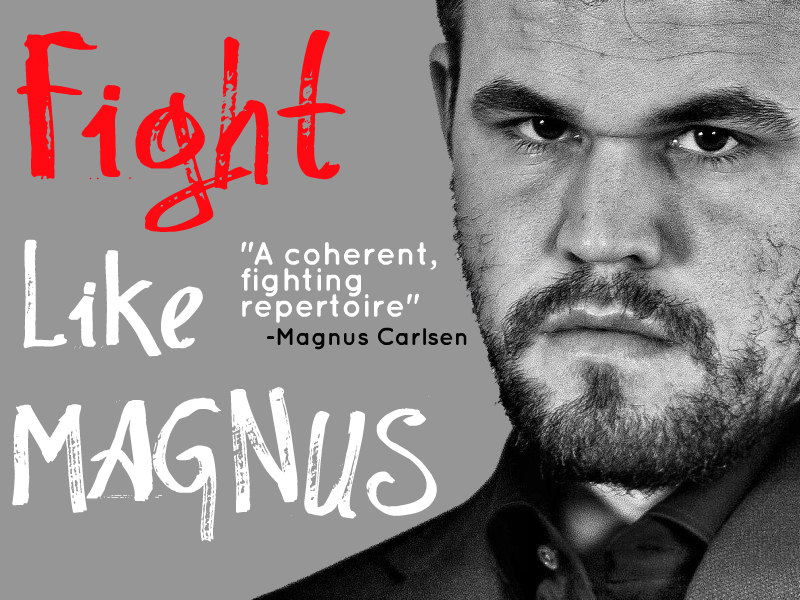 The course has been designed and created by science-based chess learning platform Chessable to get you playing like the Norwegian.

Everyone knows I rate the Sicilian highly, especially the Sveshnikov line. In this new course, IM Christof Sielecki explains many critical lines from my games. He’s created a coherent, fighting repertoire.

My team and I are always pushing the boundaries of chess theory. After studying this course, you'll be set to discover the next novelty together with me. Enjoy!

Carlsen has been imperious with his brand of 1...c5. The champion hasn’t lost a classical game with it since 2011.

Now it’s your turn to take up the mantle and play like the king. 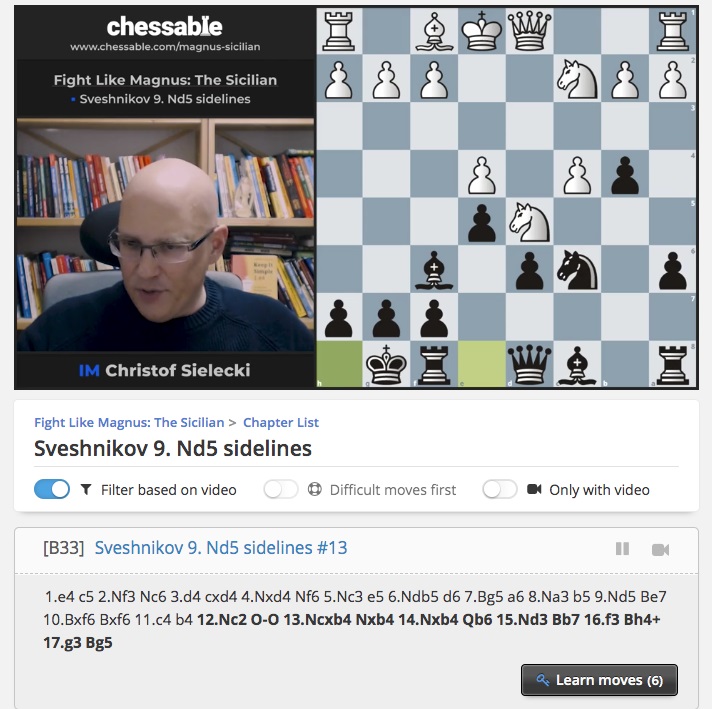 To celebrate the release of Fight Like Magnus, we’re offering a free hour-long video lesson that you can download here

This quickstart guide gives you all the basics to get you up and running with Carlsen’s superb Sicilian.

Check out the full course, available now on Chessable

IM Sielecki, aka YouTube streamer, chess24 author and Banter Blitzer ChessExplained, presents a clear and precise repertoire based on the lines Carlsen has played in top level chess. These are Carlsen's preferred moves, plus a sprinkling of extra thoughts from IM Sielecki that may interest the champ himself.

But while Fight Like Magnus: The Sicilian shows you the World Champion’s view on the lines, it’s also a practical repertoire to suit all levels - not just the super-elite. IM Sielecki comments:

This repertoire is not only objectively sound and strong, but also leads to entertaining and tense games, regardless of whether you are an amateur player or the World Champion.

Sidelines and suboptimal lines are covered, making Fight Like Magnus a complete repertoire against 1.e4 that the Black player can rely on in all circumstances.

How Carlsen deals with the Alapin (1.e4 c5 2.c3), or the Rossolimo (which he faced three times against Fabiano Caruana at the 2018 World Championship) is examined, as well as the Closed Sicilian, the Morra and the Grand Prix.

IM Sielecki has also included a “Quickstarter” module to the course to get players new to the Sicilian using Carlsen’s lines in no time.

Hosted by our friends at Chessable.com, Fight Like Magnus utilises the MoveTrainer memory system to accelerate your learning and test you as you go along. It's designed to help you digest and retain complex theory fast and with ease and then take your opening skills to the next level. 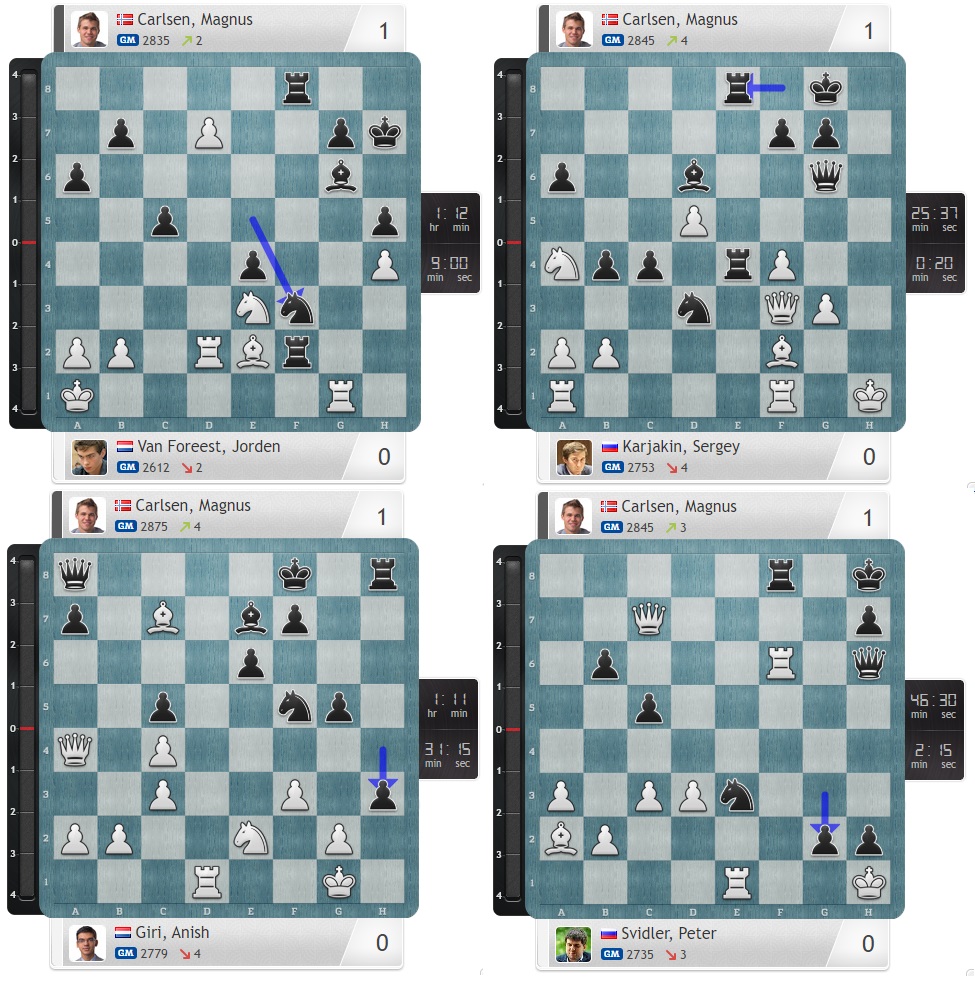 Harness the power of Chessable and start learning to fight like Magnus Carlsen.

IM Christof Sielecki on why Carlsen’s Sicilian is so special:

Late 2017/early 2018 the chess community was amazed by the attacking brilliancies that AlphaZero played, demolishing the (up to that point) king of engines, Stockfish. One theme of these games was that AlphaZero again and again managed to win due to a local superiority on the board near the enemy king.

At the time Magnus Carlsen said that he was highly impressed by the games and thought about how to implement strategies that the neural network used. Later in 2018, at the London World Championship match, we saw one clear change in Carlsen's play, the switch from his usual 1.e4 e5 as Black to the Sicilian, based on the Sveshnikov.

Thinking back to the AlphaZero strategy of going for the enemy king, based on having more pieces on that side of the board, this choice makes perfect sense.

In the Sveshnikov, Black frequently manages to build up an initiative on the kingside, even starting a pawn storm with ...f5 in the process. White has some strategic assets, but Black plays for mate! White often avoids the Sveshnikov with lines like 1.e4 c5 2.Nf3 Nc6 3.Nc3 or 3.Bb5, but even in these lines Magnus managed to create situations with a stable centre and later attacking play with ...f5.

Since adopting this repertoire, inspired by new neural network engines, Magnus has won countless games with the black pieces. I was amazed to see how Magnus managed to get checkmating attacks so often, a prime example being his win over Peter Svidler at the Grenke Chess Classic.

After seeing games like that the idea for this course was born. I collected all the games of the World Champion and compiled a full repertoire for Black, using the lines that Magnus has played. All the analysis has been conducted with strong engines, including the neural network based Leela Zero.