Top seed Ding Liren has beaten compatriot Yu Yangyi to reach the FIDE World Cup final for a second time in a row. The victory means he joins Fabiano Caruana and his final opponent Teimour Radjabov as confirmed players in the 2020 Candidates Tournament, while Anish Giri finds himself leading the newly opened race to qualify by rating. Ding Liren needed just two rapid games to secure his final place after Yu Yangyi matched him all the way until a time trouble blunder brought a sudden end to the contest. Yu Yangyi plays Maxime Vachier-Lagrave for 3rd place. 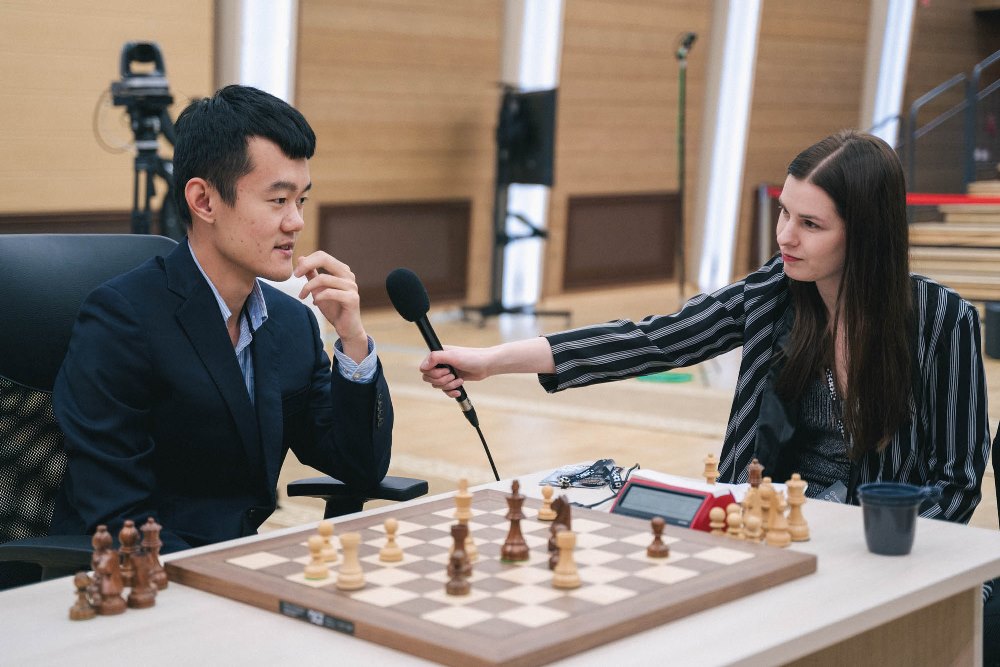 You can replay all the 2019 Khanty-Mansiysk FIDE World Cup games using the selector below:

And here’s the day’s live commentary from Jan Gustafsson and Laurent Fressinet: 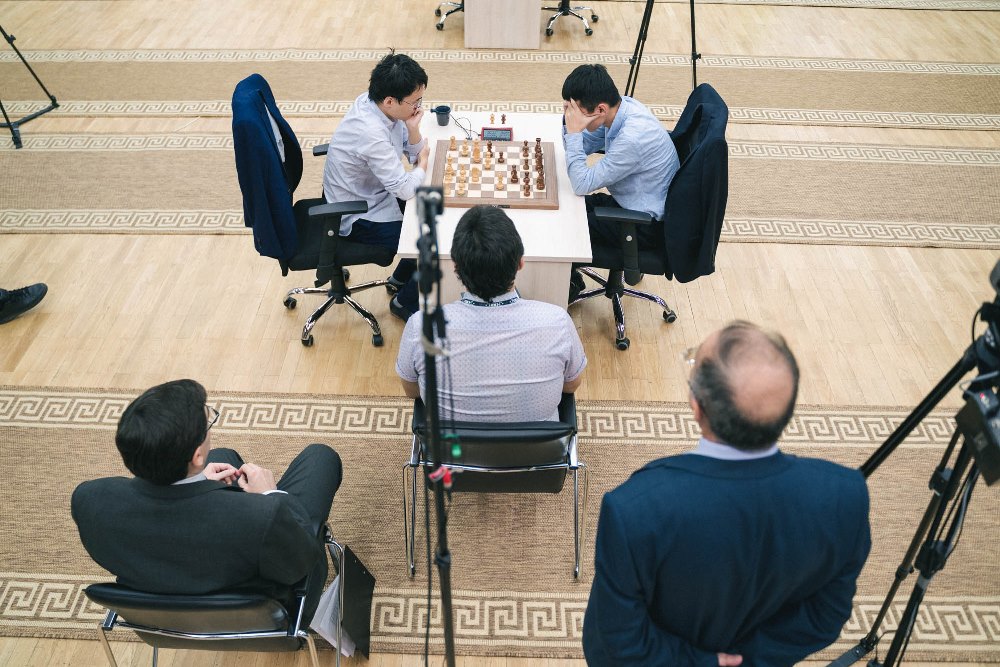 In the final stages of the World Cup the officials outnumber the players | photo: Kirill Merkuryev, official website

When current world no. 3 Ding Liren was asked if he felt he’d improved since the 2017 World Cup, where he finished runner-up to Levon Aronian, he commented:

Yes, I think so… since last time I came here as 9th seed but this I’m the top seed!

It was a statistically irrefutable argument, but it’s worth noting that being the top seed for these knockouts has usually been a guarantee of nothing! The only player either to get to the final or to win the 128-player World Cup as the top seed is… Boris Gelfand, who won in 2009. If you go back to the days when the big knockout was actually the FIDE World Championship then Vishy Anand joins Gelfand. As top seed he twice won the event (though in 1998 he then had to face a rested Anatoly Karpov in an extra match for the title) and once reached the semifinals. Note the first three big knockouts had 100 players, with top seeds going directly to the 2nd round:

Ding Liren was lost for one move in his first game against Sergei Movsesian, but other than that he’s been solid and impressive as he’s beaten Shaun Press, Movsesian, Alireza Firouzja, Kirill Alekseenko, Alexander Grischuk and now Yu Yangyi, going 20 games unbeaten. 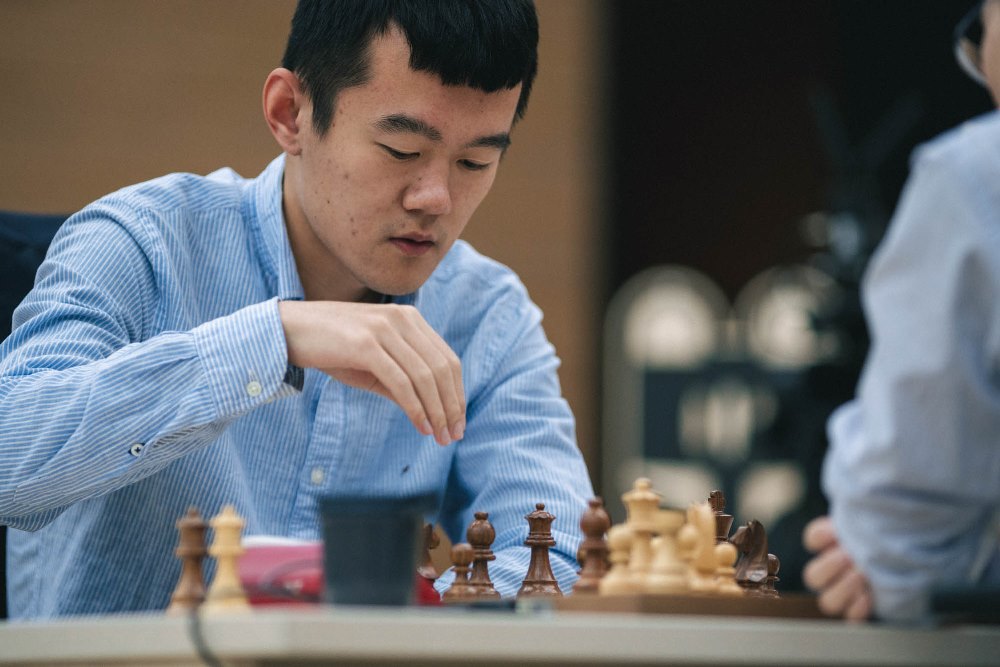 The clash with Chinese no. 2 Yu Yangyi was difficult since the two players are friends and used to sharing opening ideas. As Ding commented:

Sometimes we just surprise each other by unusual opening choices. We didn’t play our most familiar lines, to deviate from our preparation.

The other issue is that, although both are expanding their opening repertoire and understanding, they share the same highly tactical style, where they’re unafraid to go for positions that some other strong players would reject on aesthetic grounds. It was always likely to be a closely balanced match, and so it proved!

In the first rapid tiebreak game Yu Yangyi varied with the rare 6.Qb3 from the 6.Rc1 that saw Magnus Carlsen force Ding to find incredible defensive resources in their classical game from the recent Sinquefield Cup. Then 8.d5!? was a bold pawn sacrifice – it tells you something that one of just two players to try it was the wildly aggressive Timur Gareyev in last year’s World Blitz Championship:

Computers love Black’s position, but our commentary team were fearing for Ding Liren’s life at this stage, and felt he did well to follow 8…Na5 9.Qc2 Nxc4 10.0-0-0 with 10…Bxc3! rather than playing something like 10…g5 and running into a sacrifice on g5. As we mentioned, though, both players are extremely good in messy, tactical positions, and the game would go on to end in 31 moves after sharp and accurate play by both sides. 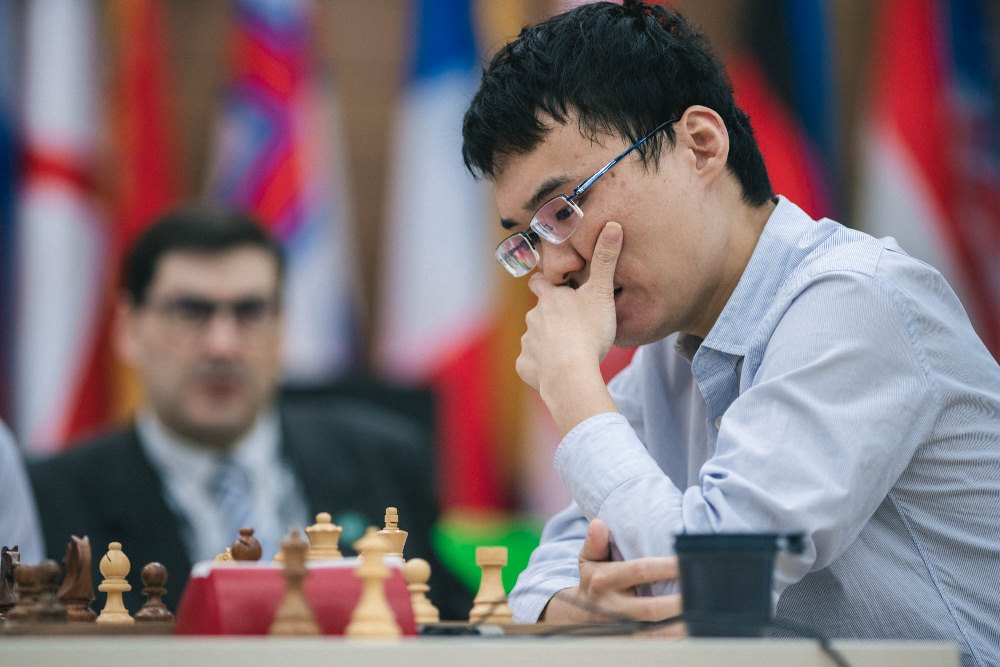 The second game was an even sharper English that followed David Anton’s game against Praggnanandhaa from the Prague Challengers earlier this year, though Yu Yangyi played the correct 12…f5! not Pragg’s 12…c6?, following his compatriot Li Shilong from the Chinese Team Championship last year. The first new move of the game was Yu Yangyi’s dynamic 13…Nd7, temporarily sacrificing a pawn for fast development:

Now Yu Yangyi was giving up an exchange: 17.Bh7+ Kh8 18.Ng6+ Kxh7 19.Nxf8+ Kg8 20.Ng6 but again with 20…Qf6! Black was getting good play for the sacrificed material. What followed was a string of fine only moves by both players, and though a few inaccuracies were then flagged up by computers the Chinese stars continued to play strong and brave chess. 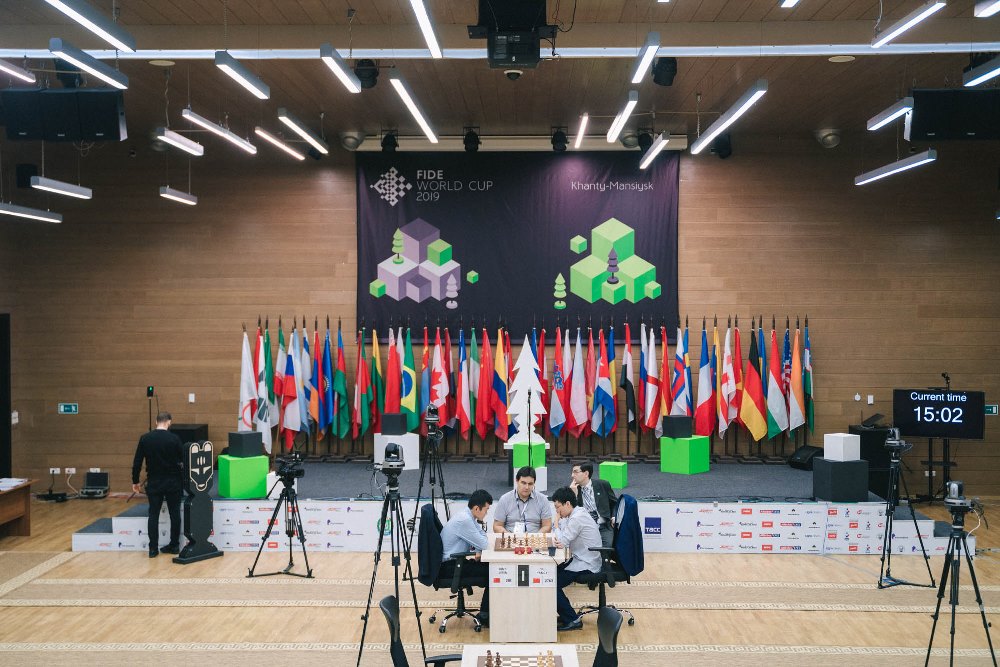 We were going to get a Chinese player in the final, but which one? | photo: Kirill Merkuryev, official website

The issue was time, however, and Yu Yangyi was down to 1 minute to his opponent’s 5 at the critical moment:

Here Black could play 33…Rxc7, when after 34.Rxb2 Qxb2 White picks up the knight with 35.Qxf4 and material is equal. Black can improve on that line by sacrificing the knight first with 33…Nxg2!, but Yu Yangyi instead went astray with 33…h4? That ran into 34.Qg5! and Yu Yangyi continued 34…Rxc7?, only to stop himself after 35.Rxb2:

If Yu Yangyi took the rook on b2 as mentioned in the plan above White would no longer take the knight on f4 but play 36.Qd8+!, winning the c7-rook. At this point Yu could have simply resigned, but you don’t do that in a vital World Cup game, so he played on with 35…Qxg5 36.Nxg5, but the position an exchange down with White’s pieces so well placed was never going to end well for him. Resignation came on move 43.

So Ding Liren had reached not just the World Cup final but the Candidates Tournament that is set to take place in Yekaterinburg, Russia in the second half of March next year. The winner of that 8-player event will face Magnus Carlsen in a World Championship match later in the year. So far we know the following players:

The remaining players will be:

And that leaves 1 place as a wild card. The regulations there are that the organisers must pick a player who is either in the Top 10 by average rating or finished in the highest non-qualifying place in the Grand Swiss, Grand Prix or… the World Cup. That faint glimmer of hope may be what Yu Yangyi and Maxime Vachier-Lagrave need to rely on to get through the next four days in a cold Khanty-Mansiysk – that and the $10,000 difference between $50,000 for 4th place and $60,000 for 3rd place. For Ding Liren and Teimour Radjabov, meanwhile, there’s the glory of winning one of the toughest events to win in world chess – plus also the $30,000 difference between the $110,000 top prize and $80,000 for the runner-up. Ding summed up:

The matches are over four classical games from Monday to Thursday, though if one players gets to 2.5 points before that the final game won’t be played. And then of course we could also still get tiebreaks on Friday! Tune into all the action live here on chess24 from 12:00 CEST.