FIDE World Cup QF: Who wants to win an exchange?

Ding Liren rejected an exchange sacrifice by Alexander Grischuk only to play one of his own in the most dramatic moment of Day 1 of the 2019 FIDE World Cup Quarterfinals. Computer-armed spectators screamed blunder at both players, but it was an incredibly complicated game which Ding eventually drew an exchange down. The curiosity was that Yu Yangyi drew a very similar position against Nikita Vitiugov, while Xiong-Radjabov and Aronian-MVL were much quieter draws. 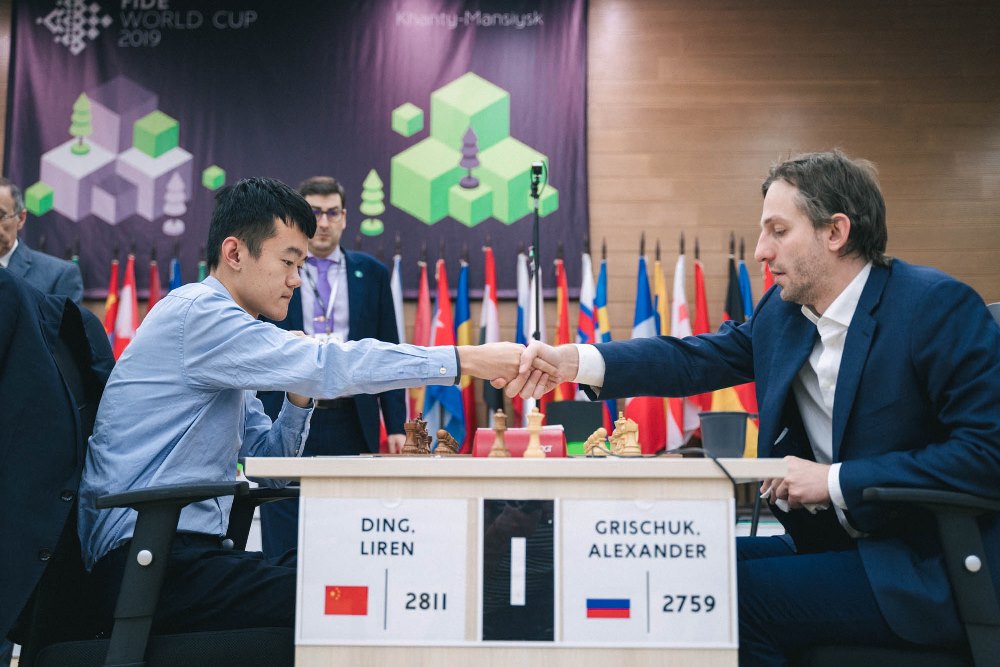 Ding Liren-Grischuk was one of the most unfathomable games of recent times | photo: Kirill Merkuryev, official website

You can replay all the games from the 2019 FIDE World Cup using the selector below:

Let’s take the draws in the order in which they finished: 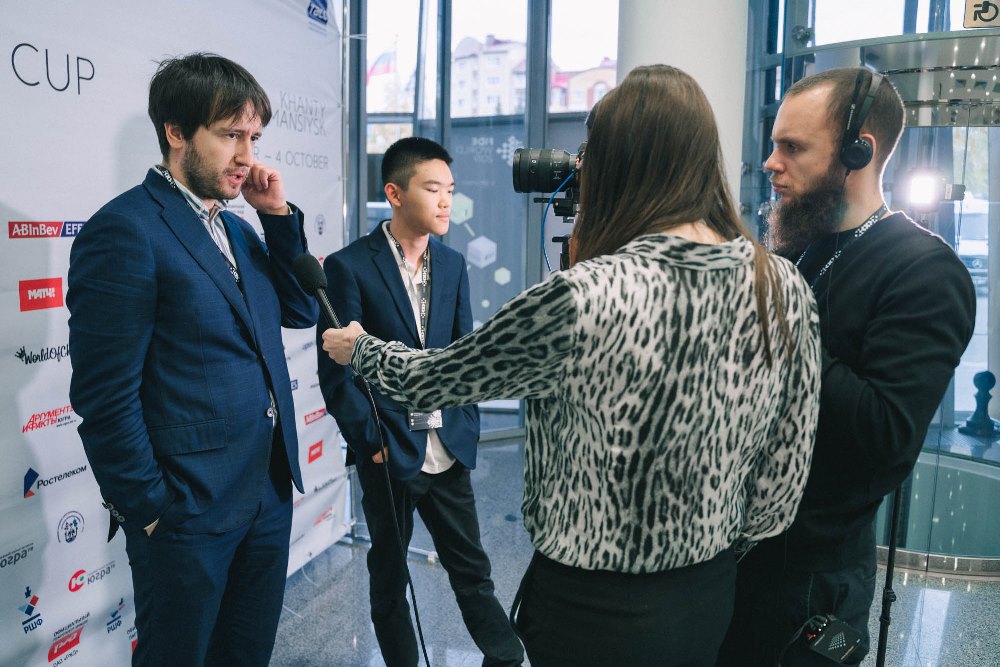 Radjabov and Xiong were the first players to be interrogated | photo: Kirill Merkuryev, official website

The impression this game made was that Jeffery Xiong was very happy to get a breather after the drama of his tiebreak win over Jan-Krzysztof Duda, but as he pointed out afterwards he’d chosen the same 7.Na3 line in the Catalan that Le Quang Liem had used to almost knock out Levon Aronian the day before. The difference came after 8.bxa3:

Levon had gone for the bold 8…b5 and soon found himself in a world of hurt, but Teimour Radjabov instead chose what Jeffery called the “most solid way” 8…Bd7. By move 13 all the minor pieces had left the board, and by the time Radjabov surprised Xiong with a new move (15…Qb2) the position was already very close to a draw. The players lay down their weapons on move 30.

They were interviewed together afterwards: 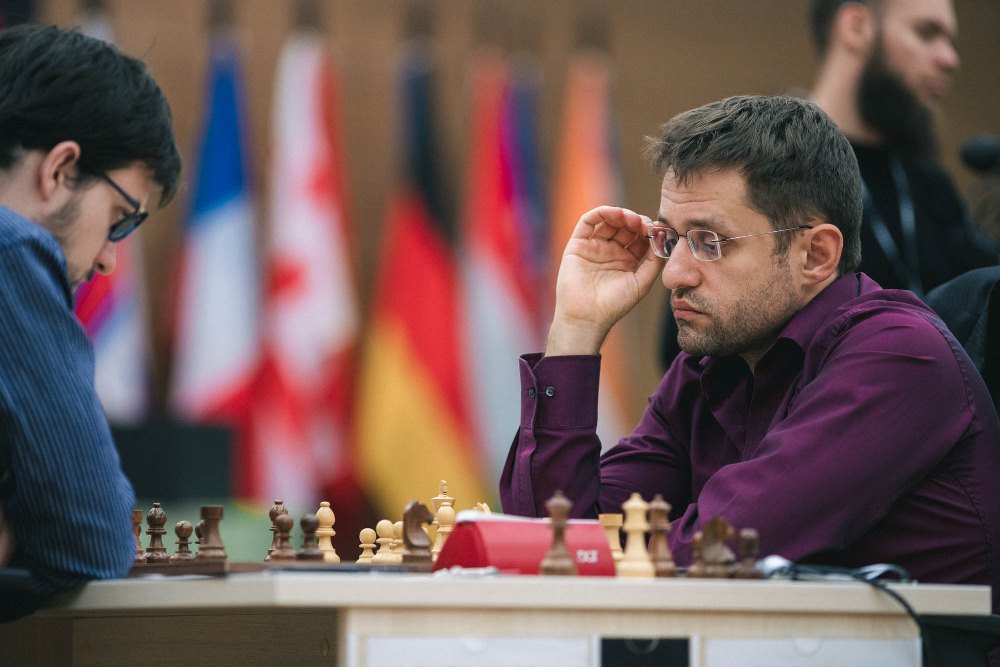 On the surface Aronian-MVL looked even quieter, but the ending reached from the Grünfeld after 19…Nc6 wasn’t as innocent as it seemed:

Magnus Carlsen had here played 20.Bc7 and gone on to win a pawn and torture Alexander Grischuk for 74 moves in the 2014 edition of Norway Chess. Grischuk said back then he'd have posted the position with the hashtag #ExcitingChess if he had a Twitter account, though that game was overshadowed by the epic 8 hours Giri spent on the same day trying to beat Karjakin only to blunder on move 131 and lose!

Here Levon instead went for 20.Bxc6 immediately. Maxime misremembered that Grischuk had lost that earlier game against Carlsen, but in any case he was on guard and found a sharp solution on move 25:


I was aware of potential dangers so I made sure to be accurate, and when I found this f5 idea I went for it. It gives up a pawn, but it gives me enough activity, or opposite-coloured bishops, as happened in the game.

Play continued 26.Ng5+ Ke8 27.f4 Bh6 28.Nxh7 and the only way back for the knight was to allow Maxime to exchange off his dark-squared bishop and leave only opposite-coloured bishops on the board. The game ended in a fortress on move 44, with Levon summing up:

I thought it was generally a solid game, something to be expected in the quarterfinals. I was trying to pose some problems, Maxime I think played in a respectful manner, and the game ended in a draw.

This was by far the highlight of the round, with Alexander Grischuk recalling how in the second round of the World Cup against Benjamin Bok he’d spent 25 minutes on his 6th move after 4…dxc4 5.Bg2 c6. This time Ding Liren played 5…a6: 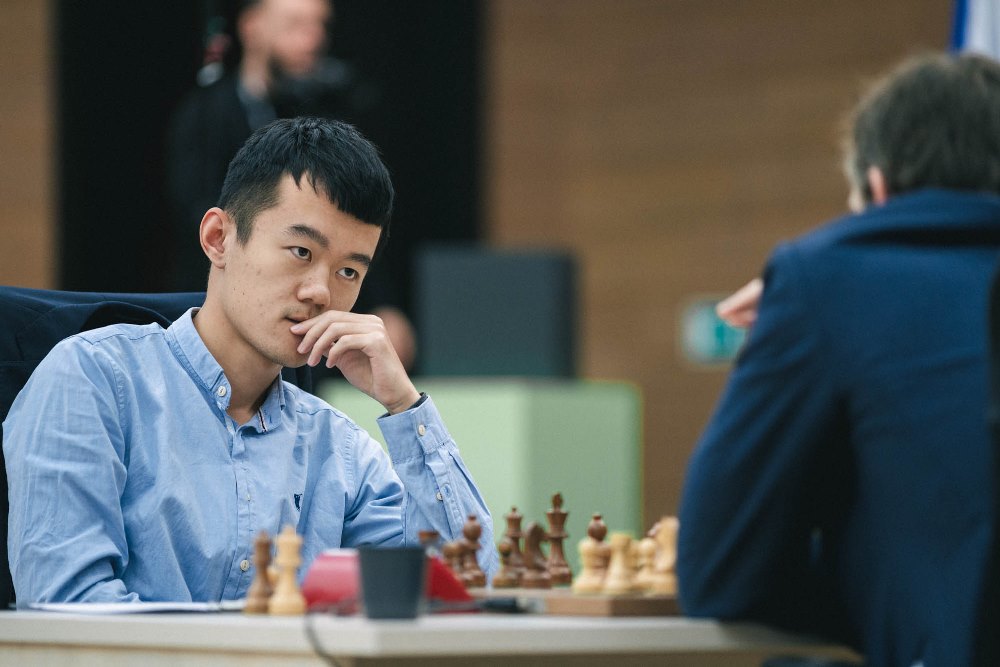 The turning point of the whole game came after 14.Qf3!?, a dramatic attempt to change a narrative that looked like being all about an unstoppable black kingside attack:

Of course Grischuk hadn’t blundered a piece – 14…Bxc4 15.Qxc6! Ke7 and while simply capturing the bishop is good, 16.b3!, preparing Ba3+, is better – but what about the obvious reply 14…Bd5! The only logical response, and the one Grischuk had planned, was to give up the exchange with 15.Rxd5 cxd5 16.Qxd5. It turned out that, objectively speaking, both players had overestimated that idea during the game. Ding commented, “maybe I will be positionally worse, so I don’t want to play in such a passive position”, while Grischuk felt that after 16…Qf5 17.f3 Qc2 18.Qc6+ White could immediately draw by perpetual check. 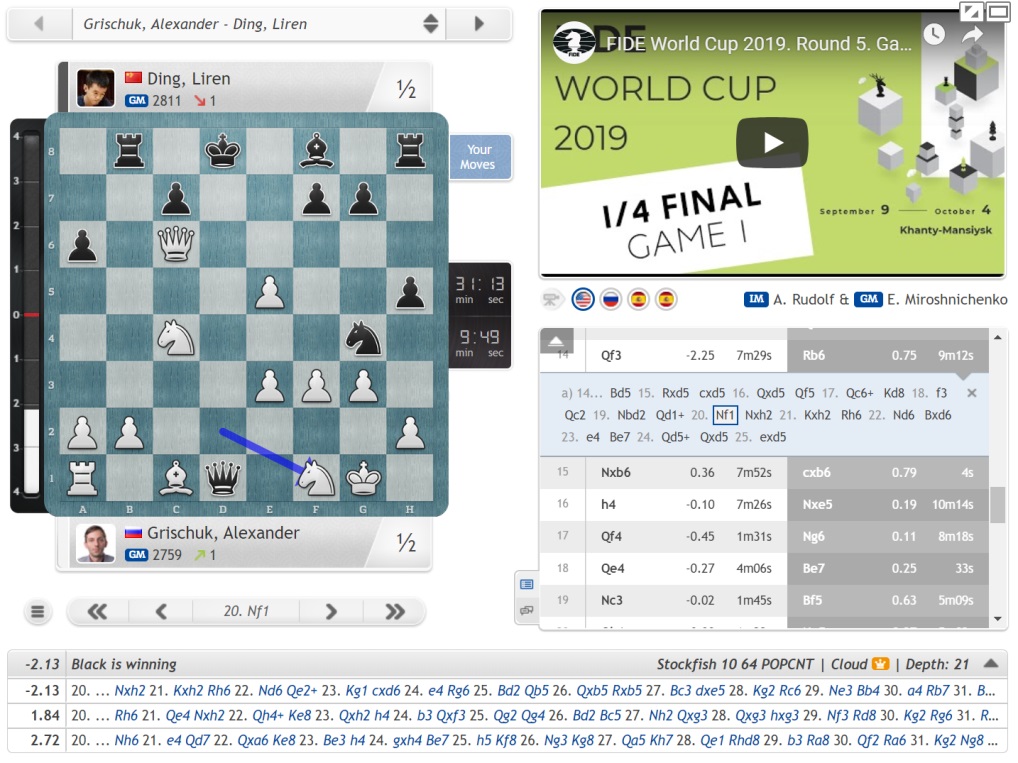 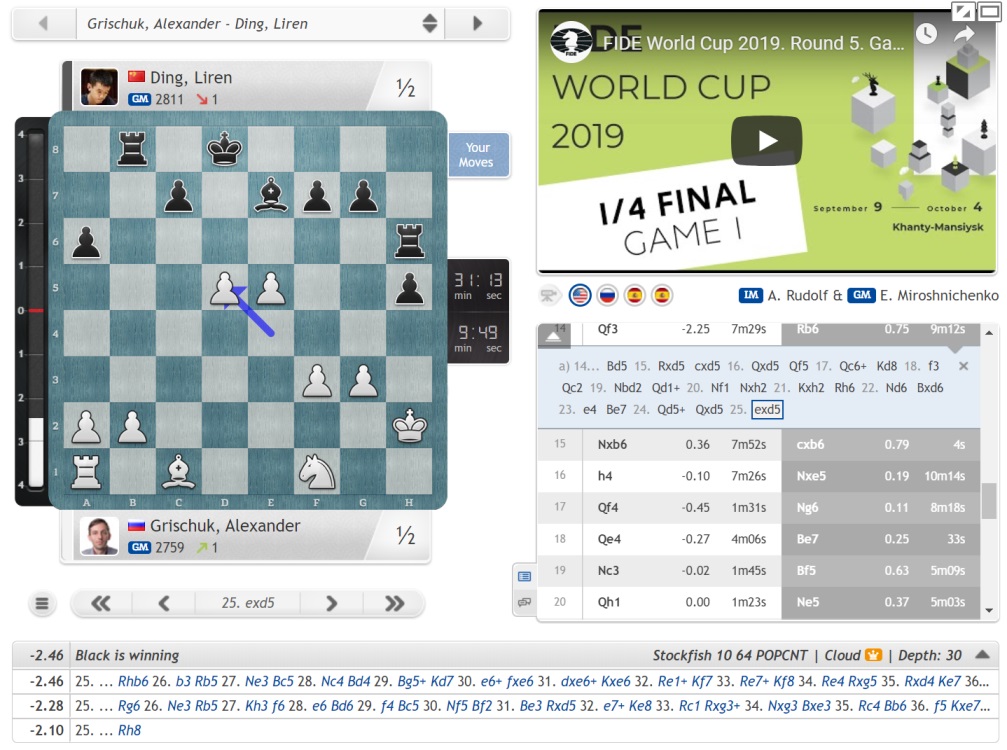 In the game, however, Ding Liren surprised everyone with 14…Rb6!?, an exchange sac of his own.

Grischuk accepted and gradually managed to consolidate, but Ding Liren stayed true to his style of countering as actively as possible:

28…f5! was the start of a sequence of moves that liquidated into a position where Black had the bishop pair and a pawn in compensation for the exchange. Grischuk said he was able to make a draw “from a position of strength”, but no more than that.

Grischuk agreed it was better to start with Black in a mini-match, “but you know, Vitiugov, for example, he just starts with White, wins with White every time, and then wins the match!” Nikita had beaten Sergey Karjakin and Wesley So that way, and it gave him the confidence to reject Yu Yangyi’s early offer of repeating moves in a 6.g3 Najdorf. 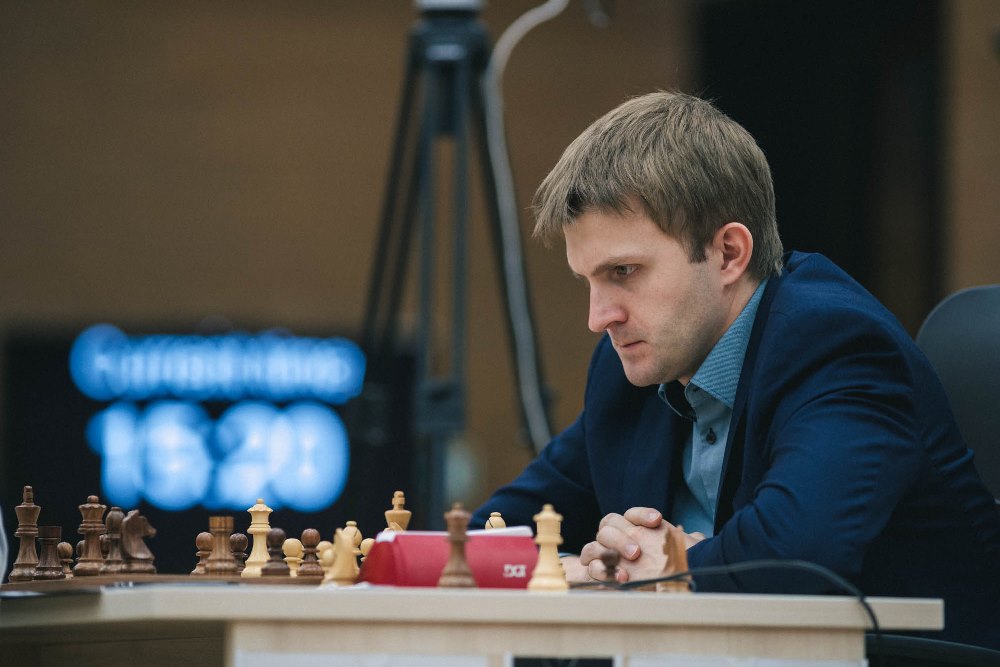 Yu Yangyi, like Ding Liren, went on to sharpen the position with an f5-break, and the parallels continued as the other Russian-Chinese pairing ended up with almost exactly the same material balance:

Vitiugov’s chances looked slightly greater, but it was entirely understandable that he decided to end hostilities on move 43:

He sacrificed the exchange and I’m not sure, probably I was better, but how exactly I should have played I don’t know. It was always a bit scary for me, so I think a draw is a deserved result.

Will we see decisive results in the return games on Tuesday or, as is always more likely after the first game is drawn, will they go to tiebreaks on Wednesday? What’s certain is that the pressure is increasing by the game as the financial and qualification goals loom ever larger for the players.