Ding Liren and Teimour Radjabov will play tiebreaks on Friday for the FIDE World Cup title and $110,000 top prize after their final classical game ended in a cagey draw. Magnus Carlsen and Peter Svidler are set to join Jan Gustafsson to commentate on that battle here on chess24, and they’ll also be able to kibitz MVL-Yu Yangyi, after a 4th draw in the 3rd place match. “I don’t really care anymore!” was Maxime’s half-joke when asked for a prediction of how it would go, with all the players ready to end their month in Siberia. 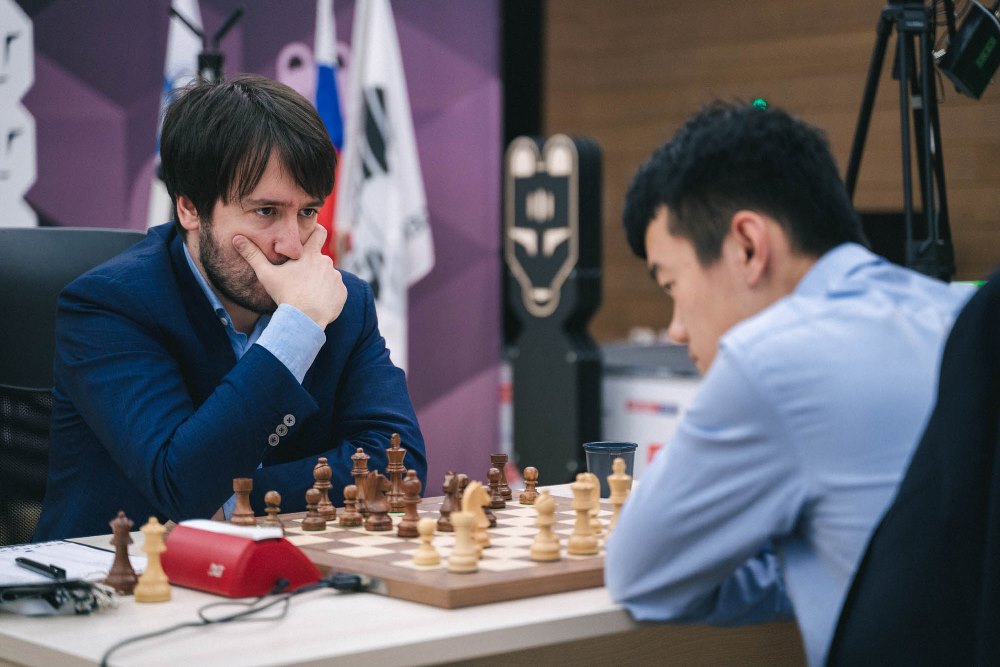 You can replay all the games from the 2019 FIDE World Cup using the selector below:

And here’s the day’s live commentary from Anna Rudolf and Evgeny Miroshnichenko: 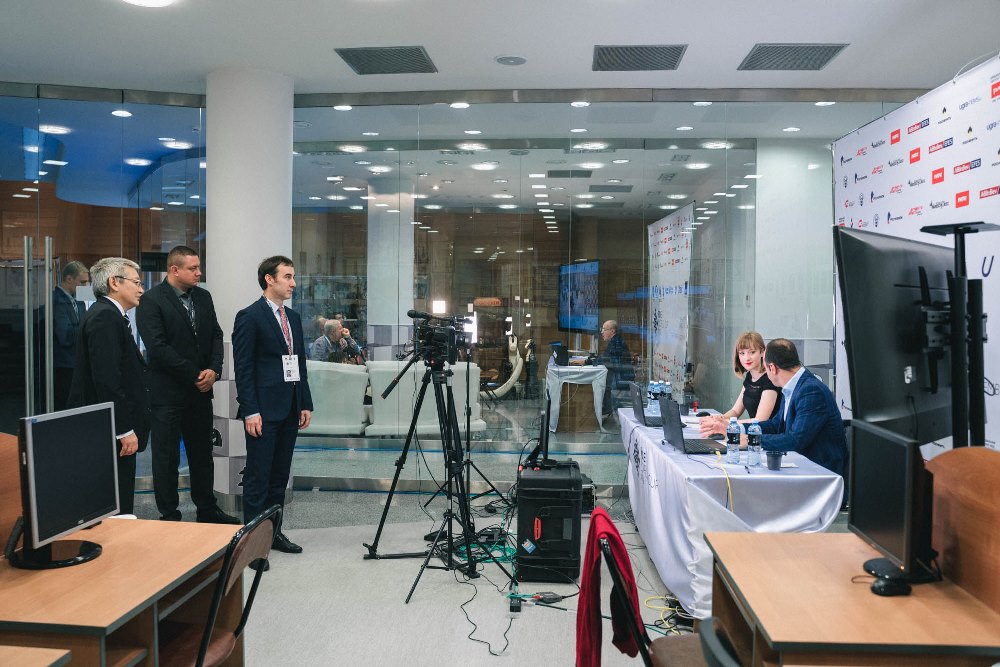 For a 3rd time in a row the winner of the FIDE World Cup will be decided in tiebreaks, with Ding Liren hoping to do better than he did against Levon Aronian in 2017. The final classical game was understandably tense. With 1.c4 Nf6 2.Nc3 e5 Teimour Radjabov already made sure there would be no repeat of the debacle he’d suffered in Game 2 after 2…e6, while his 6…Bc5 has become a major line played by a host of star players headed by Magnus Carlsen and Fabiano Caruana:

Here Ding took a surprising 8-minute break before playing not the standard 7.0-0, that he’d used to get a good game against David Navara at the 2018 Olympiad, but the temporary piece sacrifice 7.Nxe5!?, that had never been seen before at the top level. The assumption is that Ding decided to go for a very likely drawn but safe line instead of potentially walking into his opponent’s prep elsewhere. In any case, we know he was ready for 7…Nxc3 8.Bxc6+ bxc6 9.bxc3 Qd5 10.Nf3 Bh3 11.Qb3 since his first comment on the opening was, “he played 11…Bg2, that I hadn’t prepared”:

This was a curious moment, since Ding thought for 13 minutes before playing 12.Qxd5!, although it seems any other option would suddenly have given Black chances against a weak white king surrounded by a ruined pawn structure. 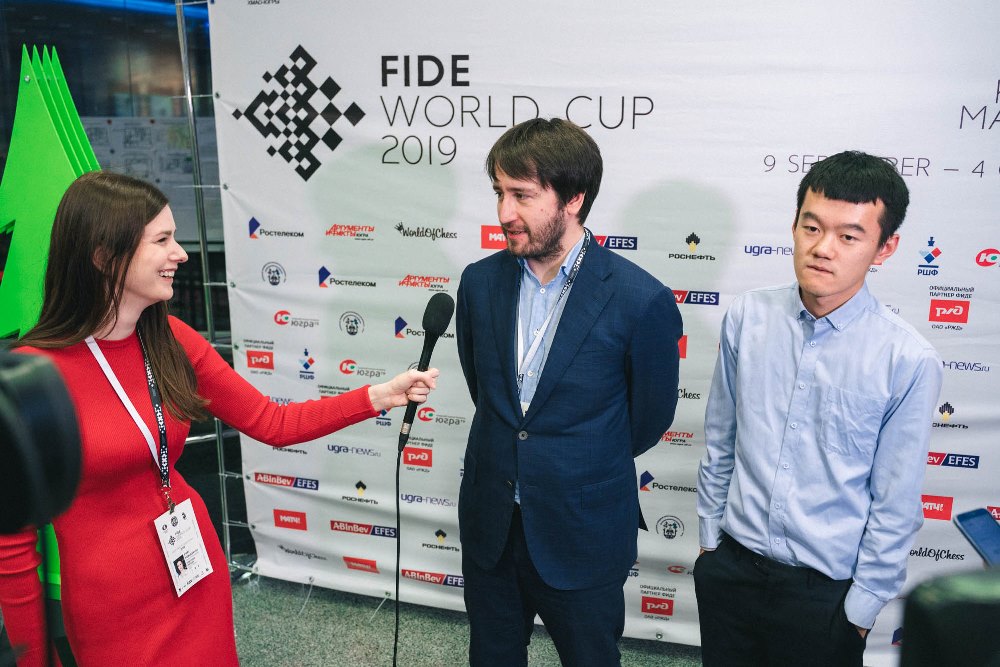 Instead in the game, when the dust had settled, White’s king was sufficiently protected and his ruined pawn structure came with the healthy compensation of an extra pawn:

At this point already it’s kind of hard to calculate anything, so at some point you’re questioning your decisions and especially in a crucial game. Generally it seems that Black can probably hold with many ways there, but you make one mistake and then it becomes tricky, so I was kind of worried not to make a mistake simply, because the position looks very simple.

Teimour did find one of the ways, winning back a pawn until the game ended in a draw on move 31.

For more details, and few players in world chess can fit as many words into a short interview as Teimour, check out the comments he and Ding Liren made after the game:

Thoughts, of course, turned immediately to tiebreaks, with $30,000 at stake – the difference between $110,000 and $80,000 – and of course a piece of chess history in winning one of the toughest events in chess. How are they feeling in advance? Well, Radjabov felt that by this stage you can’t expect too much of the players:

Already I don’t know which kind of games are suitable for us, but maybe bullet - we would play like 100 games to decide. Or Fischer Random or something - 10 games maybe would be fine and fun as well! It’s a normal thing, especially here, so just generally also we’ll try to rest and play the match tomorrow.

Ding Liren was short and sweet, still recalling his loss in Game 3:

I got used to playing playoffs so I’ll prepare better with the black pieces tomorrow.

When Ding mentions he’s used to playoffs he’s referring to the fact that he only finished his matches against Alexander Press and Alexander Grischuk in classical games, while four matches, against Movsesian, Firouzja, Alekseenko and Yu Yangyi, went to tiebreaks. He's done well, though, winning all of those ties in the first two 25-minute rapid games.

Teimour, meanwhile, has played only two tiebreaks, against Sanan Sjugirov (winning in 25-minute games) and Shakhriyar Mamedyarov (in 10-minute games). 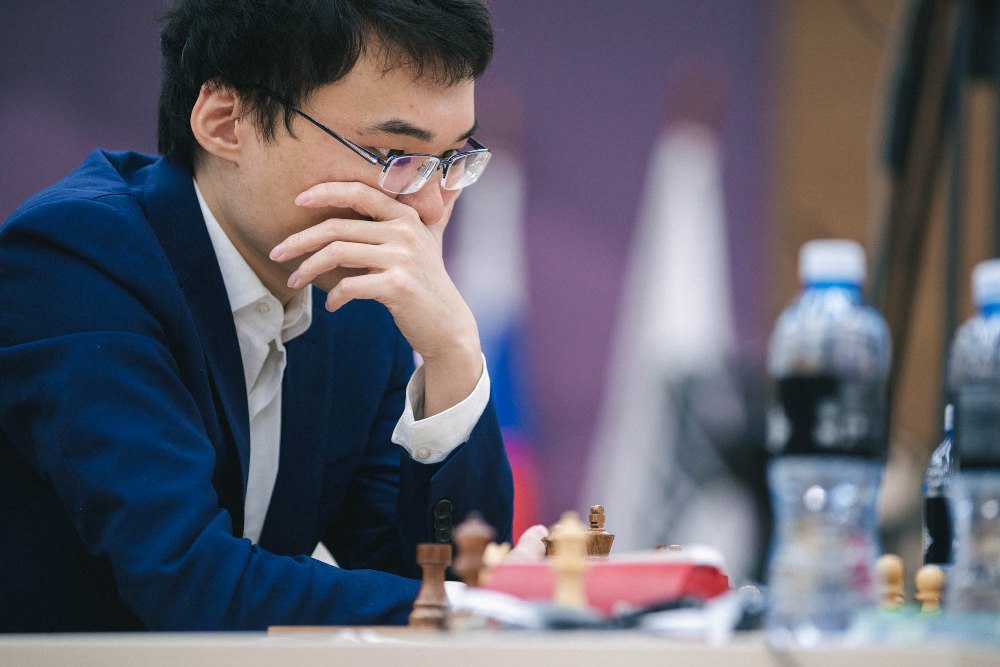 The player to play the most tiebreaks in Khanty-Mansiysk this year is Yu Yangyi, who beat only Ian Nepomniachtchi in classical chess. His 6th tiebreak will therefore be against Maxime Vachier-Lagrave after the four classical games in their 3rd place match arguably lived up to expectations. There were draws in 36, 30, 32 and 30 moves, and while that doesn’t tell the whole story it perhaps gets close.

Maxime commented of the Petroff Defence with opposite-side castling in Game 4:

I was very close to being seriously better. For instance, I was quite happy with my idea of Bd5, Qc4, it sort of forces this pawn structure which is fundamentally better for White.

This is the position he reached:

Yu Yangyi’s decision to later push his d-pawn to d5 looked to carry some strategic risk, but Maxime lamented that he could never find a good time to push f4. In any case, to no-one’s great surprise the game ended in a draw as soon as the regulations allowed – on move 30. 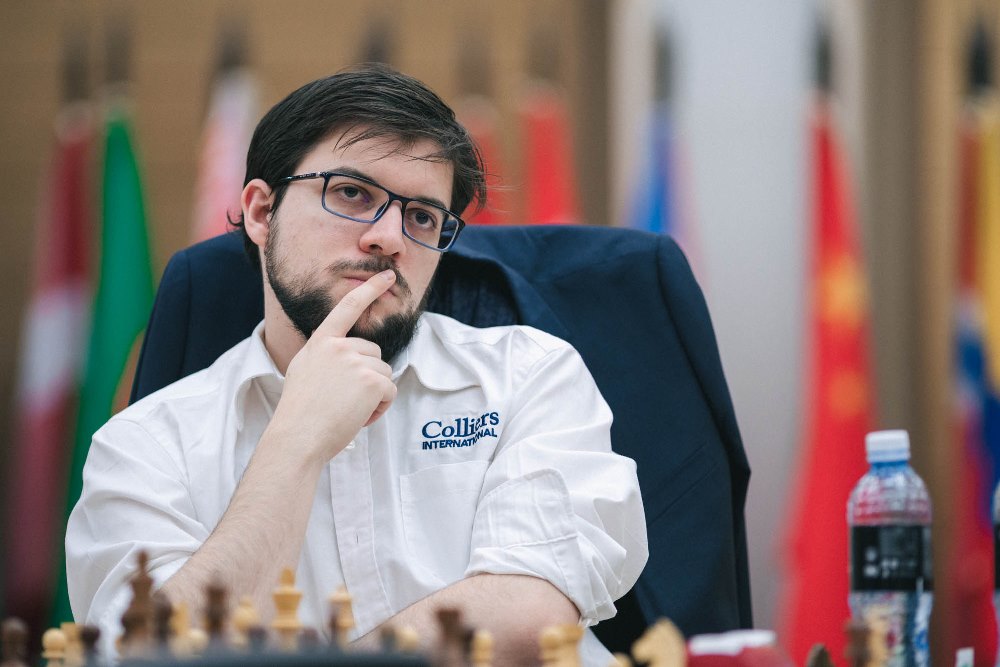 Maxime Vachier-Lagrave has had a lot of time to ponder how close he came to automatic qualification for the Candidates | photo: Kirill Merkuryev, official website

By far the most memorable moment of the post-game interviews by Eteri Kublashvili was when she asked Maxime how he estimated his chances in the playoff:

I don’t really care anymore! I mean, of course I care, but tomorrow is the last day and that will be very welcome.

While Yu Yangyi has played five tiebreaks and won four in Khanty-Mansiysk this year, Maxime has played two and lost one, with his one success coming against Dmitry Jakovenko in Round 3 – a tiebreak that memorably started with a loss for Maxime before he won on demand in the next game:

There’s much less at stake in the 3rd place playoff, but it could still mean an outside chance of a Candidates wild card, while the $10,000 difference between $50,000 or $60,000 should be reason enough to make one last effort.

For chess fans it should be great fun, and to help ensure that we have Jan Gustafsson commentating with some high-powered help! At the moment the plan is to have 8-time Russian Champion Peter Svidler commentating on the first rapid game and then a certain World Champion Magnus Carlsen commentating on the second. After that we’ll see what happens… Tune into all the World Cup action for one last time live here on chess24 from 12:00 CEST!