Just when it seemed Ding Liren was about to win the FIDE World Cup, Teimour Radjabov struck back to level the match with an impressive technical victory that left the Chinese no. 1 wondering just where he’d gone wrong. Radjabov admitted that if his opponent had known one more move in the opening the game would have ended in a draw, but as it is the fate of the title hangs in the balance with one classical game to go. Yu Yangyi and Maxime Vachier-Lagrave are in the same position after a third draw in a row, though MVL admitted he was “in big trouble”. 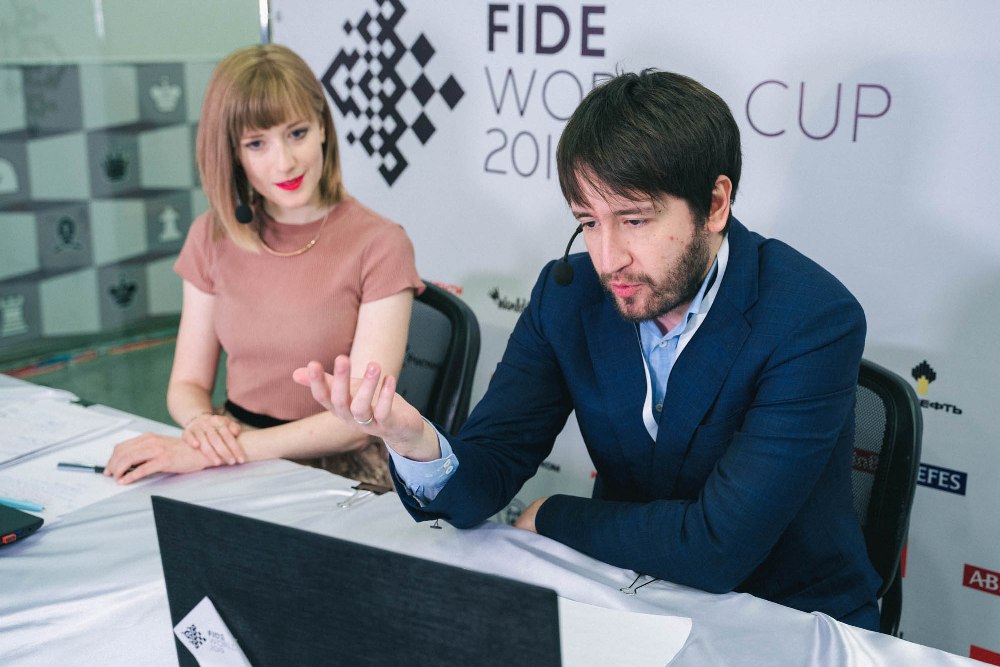 Teimour Radjabov got to show a fine technical win over the world no. 3 | photo: Kirill Merkuryev, official website

You can replay all the FIDE World Cup games using the selector below:

And here’s the day’s live commentary from Anna Rudolf and Evgeny Miroshnichenko: 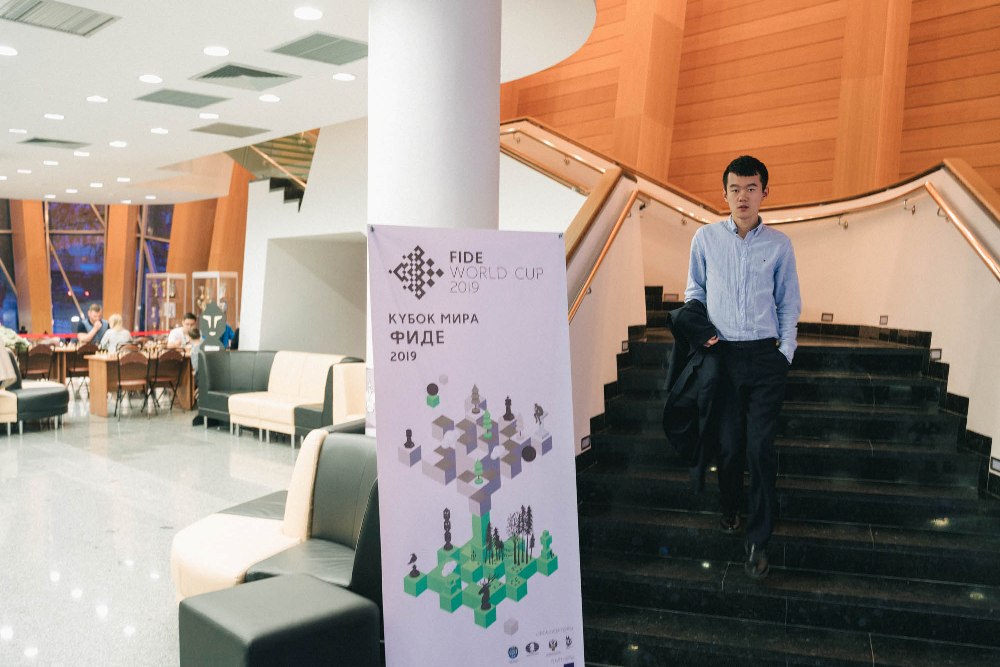 Just when it seemed Ding Liren was about to be crowned champion... | photo: Kirill Merkuryev, official website

Teimour Radjabov continues to surprise in Khanty-Mansisyk and has now scored big wins with the white pieces in his last three matches, against Jeffery Xiong, Maxime Vachier-Lagrave and now the tough to beat Ding Liren. The Chinese no. 1 doesn’t have quite the air of invincibility he had during his 100-game unbeaten streak – he lost to Wesley So and Magnus Carlsen in Croatia this summer, and then another game in a match against Dmitry Andreikin in China – but he’d gone unbeaten for 11 games in the Sinquefield Cup and then 22 in the World Cup. The way the 3rd game of the final started Ding might have thought, as did some spectators, that Teimour had merely decided to go for a quick draw and pin his hopes on the final game with the black pieces.

Teimour repeated the Marshall Gambit in the Ruy Lopez, which at the top level is famously drawish, but on move 16 he varied from the uneventful first game of the final. It was only 21.Qxf5 that was a new move, and then after the forced 21…Bxf5 and 22.Ne4 we got perhaps the critical position of the whole game:

This was Radjabov’s prepared idea, and he confessed:

Actually it’s a draw – if he knows one move here, which is very important, this 22…c5, Black simply makes a draw. The lines are not simple, but it’s a draw almost immediately… I was just hoping that if he doesn’t know this c5 then it’s a bit tricky for him. 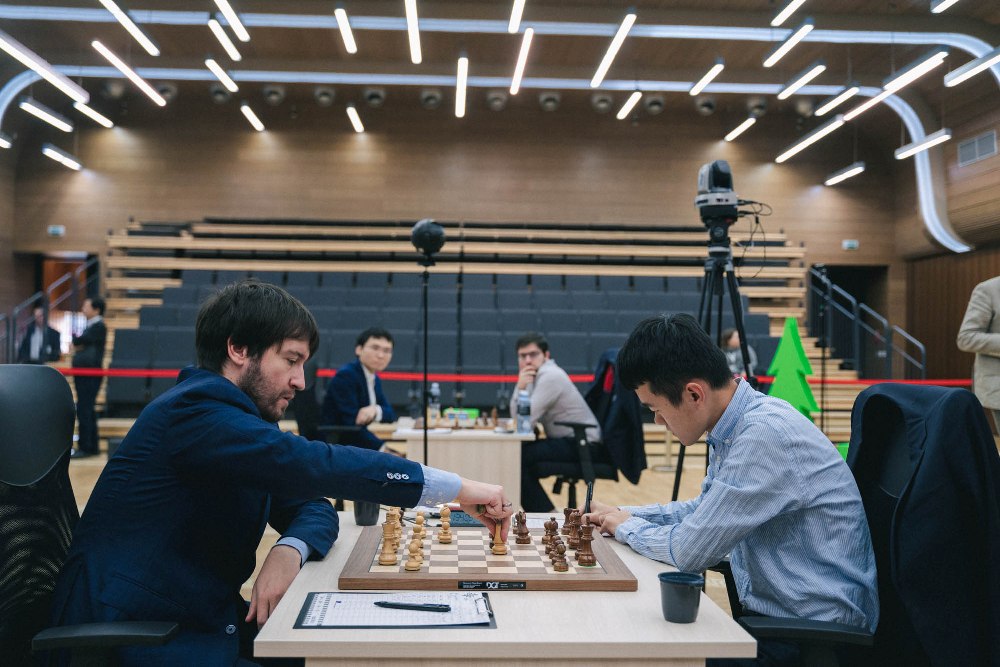 The margin between getting praised for a great game or criticised for a lack of fighting spirit is small, with Radjabov commenting that if Ding had known the c5-move, “everybody would say, ‘why did you go for this position as it’s a forced draw?’” Luckily for Teimour and us, however, Ding didn’t know it, and spent 29 minutes on 22…Bf8!? At low depths the computer approves that choice, but the game went on with 23.Nc5 Nb4 24.Re5 g6 25.axb5 cxb5:

Here Ding sank into another 17 minutes of thought, which was understandable, since it was a big fork in the road. His problem was that it struck him as a miserable choice:

After Bc8 I can choose between Rc8 and Nc2, but both of them it turns out to be very difficult to defend.

Computers and Radjabov, who had checked the position with a computer beforehand, recommend 29…Nc2 as significantly better, but Ding finally opted for 29…Rxc8 30.cxb4 Rc4. After 31.Bf6! there was no easy way to liquidate the position, and the best practical chance may have been to exchange off bishops later and go for a rook ending, even if many of those rook endings seem to be objectively lost for Black.

Radjabov said he was shocked at how easily he was able to bring up his king and win the ending, with the Ding’s fate sealed on move 44:

44.Bd6! cut the black rook out of the game, and all that remained was to avoid one last trap. If after 44…gxf5+ 45.Kxf5 Bg7 Teimour had played 46.Kg6?? the tables would suddenly be turned by 46…Bf8! and the white bishop is lost. “Even with all the exhaustion I have I can see such things!” he said afterwards.

So all 128 players who started the FIDE World Cup had now lost at least one game in Khanty-Mansiysk, though Ding didn’t look too shaken by the loss:

Teimour Radjabov meanwhile, for all his talk of just wanting to get the tournament over with and a general lack of motivation to play chess, continues to show the ability that made him a superstar when he first burst onto the world stage almost two decades ago. Here he is talking about his win:

The 3rd place match has started with three draws, but in Game 3 underdog Yu Yangyi came close to opening the scoring. He went for a rare d5 push against Maxime Vachier-Lagrave’s Grünfeld, with the French no. 1 staying true to his style by responding with maximum aggression, included pushing f5. 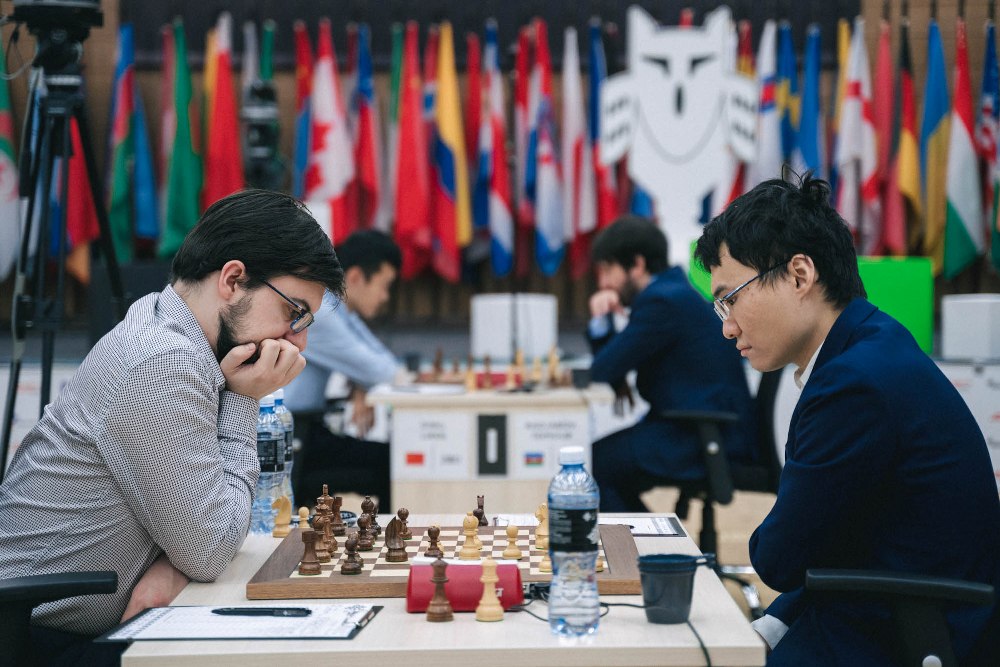 It seemed he’d put his faith in the position after 20…Qf6:

Black is level on material, develops his last piece with tempo and seems to have everything covered, but later Maxime admitted, “I felt like I was in big trouble - I underestimated how dangerous my position was”.

He’d only been expecting 21.Rd2, when he should be safe after 21…Ne4!, but instead 21.Re2! appeared on the board, which was when he realised that after his intended 21…b6 22.Qb4 and a rook move he would be struggling to deal with Nd5 next. The pressure was on, but it was suddenly released a few moves later when Yu Yangyi went for 25.Rd1, a move both players criticised:

The move Yu Yangyi should have chosen was 25.Qa3!, with Maxime admitting, “I didn’t actually find a continuation for me, so it could very possibly just be lost”. In the game the Frenchman could solve his issues with 25…Rc1!, exploiting White’s back rank issues. After 26.Ree1 the game continued with the stylish sequence 26…Nc4! 27.Qb4 Rxd1 28.Rxd1 Qb2! and soon it had fizzled out into another draw, although Yu Yangyi perhaps wasn’t forced to exchange queens when he did.

The players talked about the game afterwards:

That leaves one classical game to go, with the Khanty-Mansiysk marathon finish line in sight! Maxime Vachier-Lagrave summed things up by saying it was time for “one last effort”, though if we don’t get decisive games on Thursday we’ll all come back on Friday to decide everything in tiebreaks. Tune into all the action live here on chess24 from 12:00 CEST.