Chinese no. 1 Ding Liren celebrated the 70th anniversary of the People’s Republic of China by beating Teimour Radjabov and taking a huge step towards winning the 2019 FIDE World Cup. Teimour commented, “I didn’t want to play anything boring today,” but it was a case where the allegedly Chinese proverb “careful what you wish for” applied. Ding could finish the match on Wednesday, while MVL-Yu Yangyi will last at least four days after the second game was also drawn with relatively little incident. 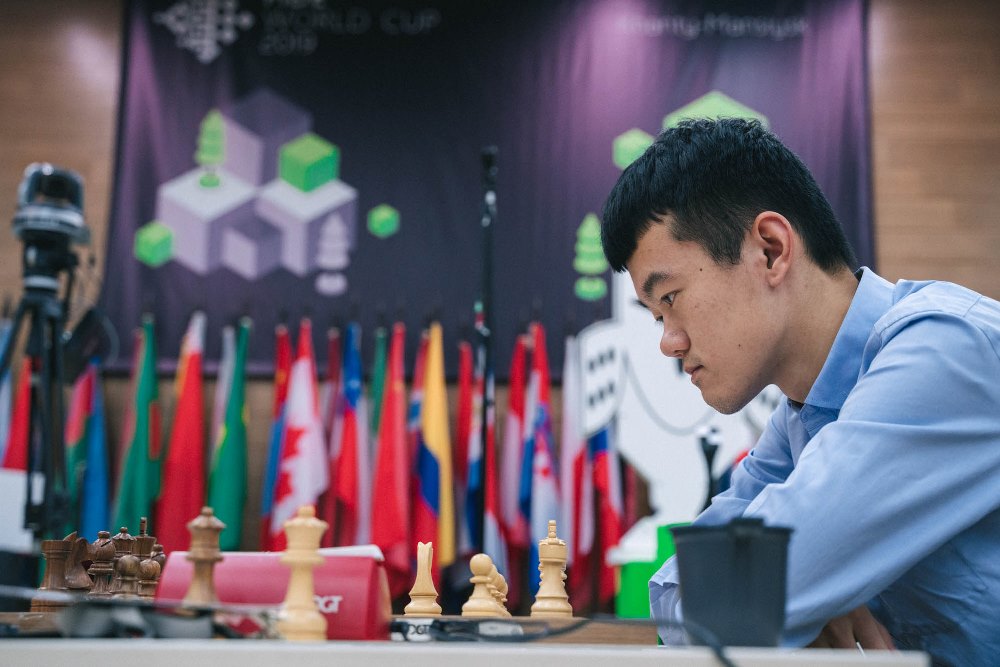 Ding Liren is two draws or one win away from becoming the first Chinese player to win the Chess World Cup | photo: Kirill Merkuryev, official website

You can replay all the games from the 2019 Khanty-Mansiysk FIDE World Cup using the selector below:

Two years ago in the World Cup final all four classical games were drawn, but Ding Liren had a lost position with White in the second and a difficult position in the fourth. When the games speeded up Levon Aronian broke through, winning both rapid tiebreak games. It’s testimony to how far the Chinese star has come that this time around he hasn’t really looked in danger – even in the crazy exchange sac game against Alexander Grischuk it never felt as though he lost control. 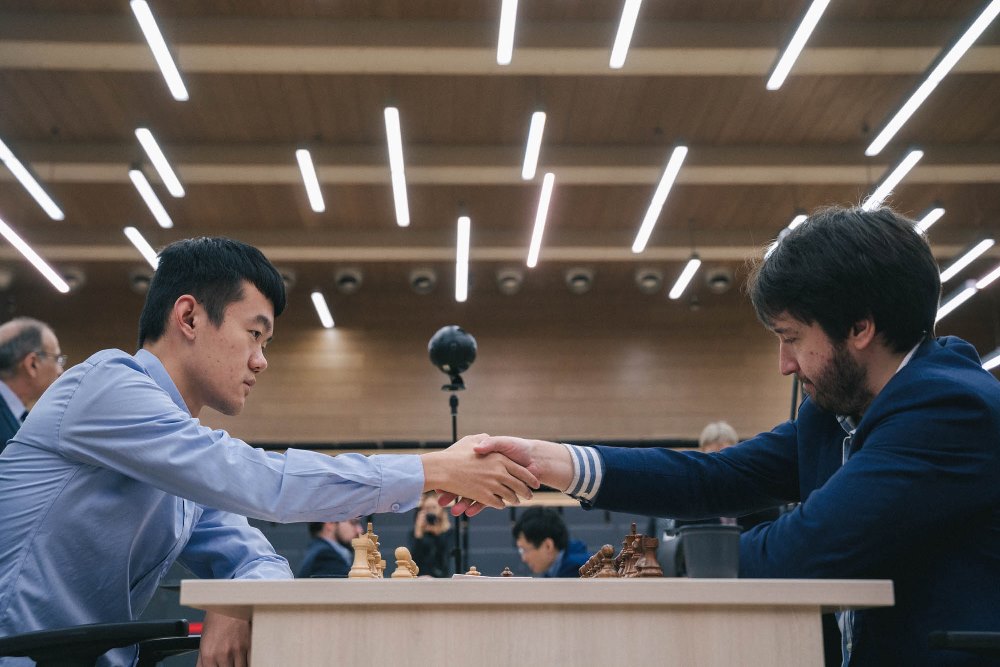 He’s now the only player remaining not to lose a game in Khanty-Mansiysk after a clash in which both players seemed to want to erase the memory of their non-game the day before. Ding Liren said that watching the Chinese National Day celebrations gave him “some more ambitions”, while Teimour Radjabov, as we already mentioned, “didn’t want to play anything boring today”. He chose to meet the English with the Sicilian-style Mikenas-Carls Variation, 1.c4 Nf6 2.Nc3 e6 3.e4 c5, with Ding Liren playing in the spirit of the line with 4.e5 Ng8:

This was the kind of play Teimour Radjabov went for when he burst onto the chess scene playing the KID and other hyper-sharp lines, famously beating Garry Kasparov with Black at the age of 15. The fun didn’t last long for Black this time, however, with Teimour finding himself out of book after 15.0-0-0, although it was a position seen a number of times, including in a 1991 Candidates Match between Viktor Korchnoi and Jan Timman:

In that game play continued 15…Qxc5 16.Bxc5 and Black immediately gave back his extra pawn with 16…d6. In hindsight both players agreed that would have been the better option, but Radjabov went for the immediate 15…d6!?. Ding commented:

Maybe he was too ambitious with this d6 – he wants to keep the pawn, but it turns out that my compensation is more than enough.

In the play that followed Ding first seized space on the kingside, then played a couple of waiting moves and was then essentially winning after Teimour’s choice on move 23:

Radjabov played 23…e5?! and after the natural 24.Nd5! Bf5+ 25.Ka1 Qe6 opened the g-file with 26.gxf6! and would make full use of it for the rest of the game. It was an extremely tough position for Black, however, with Ding saying of the move, “yes, I was surprised, but I realised that he didn’t have another move instead of e5”. It seems, however, that the one chance was to play 23…fxg5! 24.hxg5 first and only then 24…e5!, when White doesn’t get that open g-file. 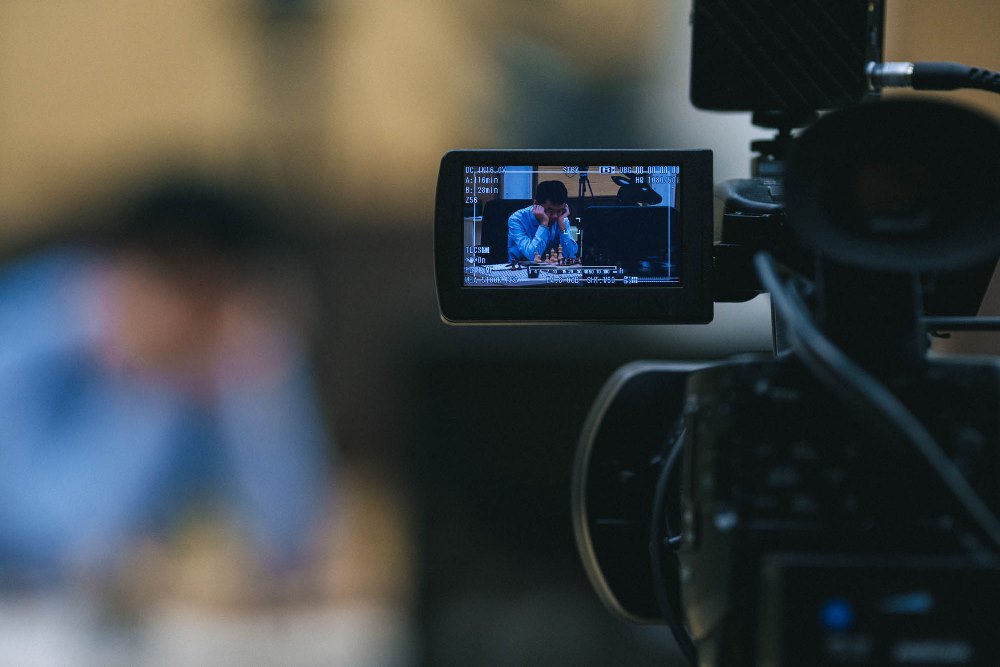 Things went from bad to worse for Black when Ding played 29.Ne3!, a move he was proud of:

I was very happy to find this idea to regroup my pieces, since my bishop is going to d5 and also his pieces are hanging.

Ding called the 29…Nd4?! reply the losing move, but though it’s true Black was lost afterwards it’s unlikely other options would have helped. It tells you all you need to know about the position that the exchange sacrifice 29…Rxg2 is one of the computer’s top choices.

From here on it was a question of converting the advantage, and the way the world no. 3 went about it was simply flawless, with 34.Qb6! a nice example:

There were plenty of other very strong moves, but as Evgeny Miroshnichenko pointed out on the live show why attack just one point when you can attack four! At the end there was an Alpha-Zero style flourish as Ding pushed the h-pawn up the board just as Radjabov was running out of time:

39…Nxh6 now runs into 40.Re1!, when of course 40…Qxe1 41.Qxf6# is mate. After 39…Ne3 Ding was originally planning the winning 40.Bc6, but then spotted the “very nice position” after 40.Re1! Radjabov resigned, since huge material investment would be required to prevent mate.

He just played a very strong game and I didn’t play well in the opening and this is a normal result.

But he was staying philosophical:

I’m not that happy, of course, but this should have happened at some point in this tournament. Psychologically I was ready for this result from the first round to the end of the tournament, but anything can happen, you can lose at any moment… It happens, it’s normal - part of chess life!

For more details on the game you can check out Ding Liren’s post-mortem below:

The other encounter never really got going, though there’s no reason to doubt the players that their intentions were to go for a fight. Yu Yangyi played the Petroff and repeated a rare line he’d used against Wei Yi in Danzhou recently. Wei Yi went for 11.h4, but Maxime Vachier-Lagrave chose the more modest 11.Rhe1. Maxime said he’d underestimated his opponent’s bishop retreat a couple of moves later, while perhaps the defining moment of the game came after 19…Re8:

Both players noted that White would like to play 20.Rxe8 Qxe8 21.f5, but they also realised that there was actually no threat, since if White captures on g6 he can’t win the f6-knight. If he takes twice on f6 he’d be in for the cold shower of Qxe1# mate! 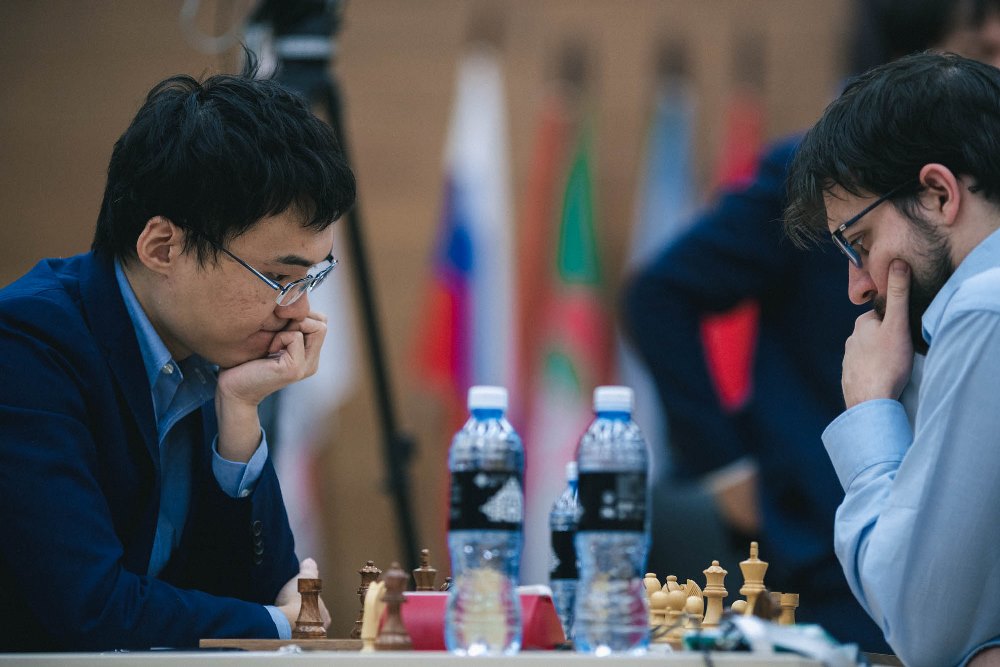 Yu Yangyi and MVL are halfway through the ordeal of playing a match neither would have wanted to play | photo: Kirill Merkuryev, official website

After 20.Bh4 the game quickly fizzled out into a draw, so that the third place match is now just a “normal” 2-game World Cup match. Watch the players talking afterwards:

That means that the 2019 FIDE World Cup final could end early if Ding Liren wins Game 3 with the black pieces, which has become a heightened possibility now that Radjabov knows he has to win one of the remaining two games to force tiebreaks. Tune into all the action live here on chess24 from 12:00 CEST.