FIDE Grand Prix to kick off in Moscow

The new-look FIDE Grand Prix starts in the Botvinnik Central Chess Club in Moscow on Friday, with 16 players facing off in the first knockout tournament. Giri-Dubov, Radjabov-Nakamura, Duda-So, Karjakin-Grischuk, Nepomniachtchi-Aronian, Wei Yi-Jakovenko, Vitiugov-Svidler and Wojtaszek-Mamedyarov are the match-ups as the players begin the battle for two spots in the 2020 Candidates Tournament. Excitement is guaranteed, with the same two classical games then tiebreaks format as the World Cup. 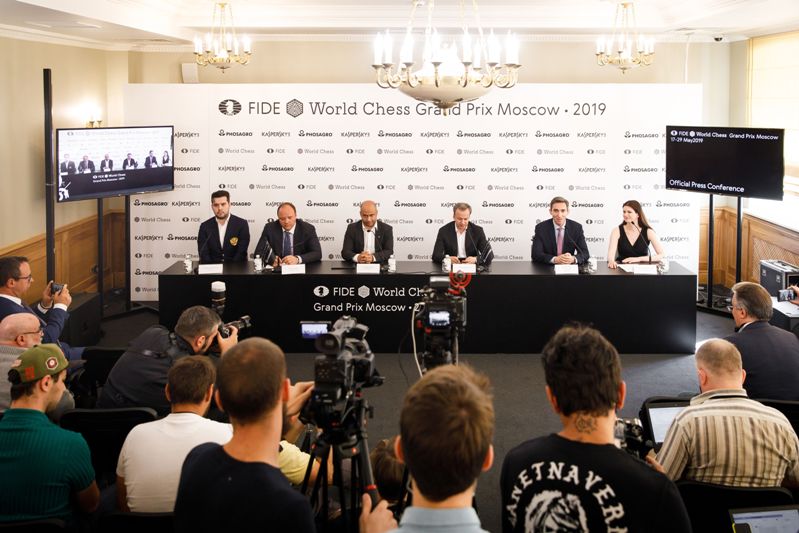 If you want to play a 14-game World Championship match against Magnus Carlsen next year you first need to win the Candidates Tournament next spring. To get there, the easy way is to be Fabiano Caruana (1 place)! If you can’t manage that, there are four more chances:

And that leaves two more places, which will be fought over in the 2019 FIDE Grand Prix series that is starting in Moscow on Friday 17th May.

Design has always been by far the best part of any events run by Agon/World Chess, and the designs for the Grand Prix series are striking | photo: World Chess

Here are the details:

Who’s playing, and who isn't?

Half of the Top 10 will be action in Moscow, with world no. 4 Anish Giri heading the 16-player field:

20 players were invited based on their average rating for 2018, with five declining that invitation:

Apart from those players, there are six more players competing in the series but not playing in Moscow: Maxime Vachier-Lagrave, Yu Yangyi, Veselin Topalov, David Navara, Harikrishna and one player yet to be decided, who will play only in Tel Aviv.

We now have the pairings:

Where are they playing? 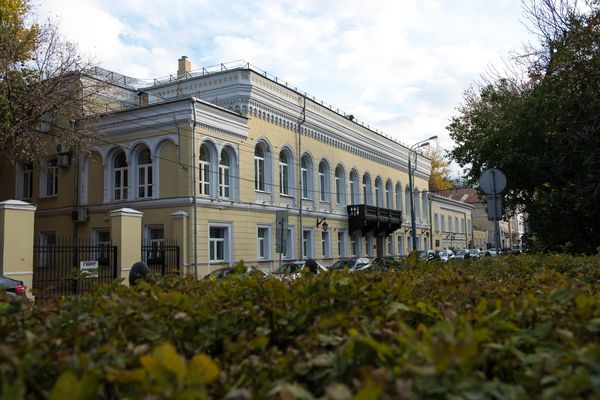 The first event is taking place in the Botvinnik Central Chess Club (or Chessplayer’s House) in Moscow from 17-29 May, with just one formal rest day, before the final on 26th May.

It will be followed by three more Grand Prix events:

Each player competes in three of the four tournaments. You can find more details of the incredibly packed chess schedule for this year in our 2019 Chess Calendar.

The easiest description of each 16-player event is as a mini World Cup, since the format is exactly the same apart from not having a longer match for the final. Each match consists of:

Then only if the players are still tied they’ll play tiebreaks on the following day:

There’s a twist, though. Any player who wins a match without needing tiebreaks gains an extra point! It’ll be interesting to see if that discourages players from taking matches quickly to tiebreaks, as many often prefer to do in knockout events. Something similar will be tried in Norway Chess next month, where players will get more points for winning a classical game rather than needing to win Armageddon after a draw. The difference, though, is that any gamble which loses in a knockout means instant elimination (and no points), so it's doubtful players will really change their strategy - except perhaps in the final Grand Prix if they're chasing one of the two Candidates qualification spots and simply winning isn't enough!

Well, this one is almost impossible to answer. The top seed is Anish Giri, who recently told Jan Gustafsson:

Apart from simply listing the ratings favourites we can point to players with successful experience in knockouts, since Levon Aronian (twice!), Peter Svidler (almost twice!) and Sergey Karjakin have all won the incredibly tough to win World Cup. Famously solid players such as Wesley So and Teimour Radjabov have the potential to shine in knockout events, while we’ll get to see two of the most promising young players on the cusp of the elite, 19-year-old Wei Yi and 21-year-old Jan-Krzysztof Duda. 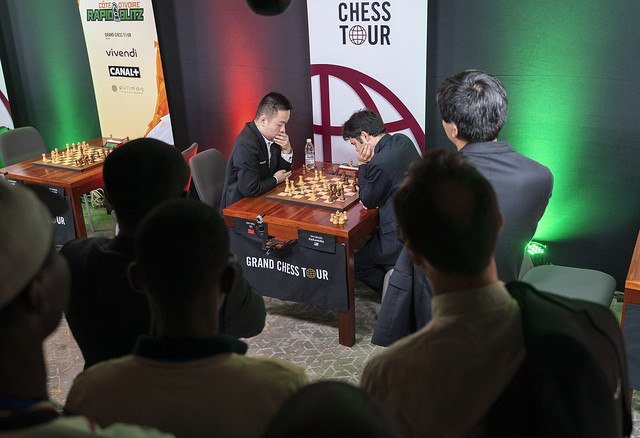 Wei Yi, Nakamura and So are among the players needing to reacclimatise to Moscow after Abidjan! | photo: Lennart Ootes, Grand Chess Tour

The lowest rated player in the field, 23-year-old Russian Daniil Dubov, is playing after receiving a wild card, but the World Rapid Champion certainly shouldn’t be written off – in the 2017 World Cup in Tbilisi he made it through to a Round 4 match with Levon Aronian after knocking out Fridman, Karjakin and Artemiev along the way. 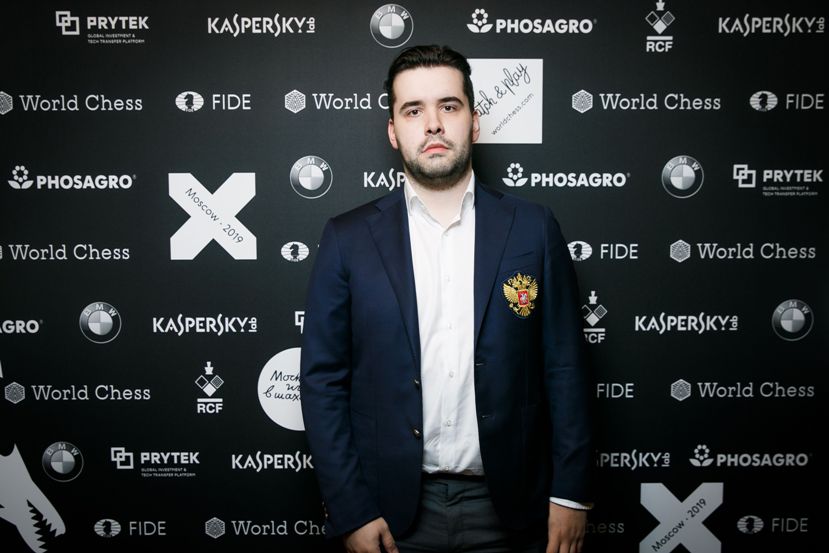 Ian Nepomniachtchi will be looking to justify his position as the Russian no. 1, though he admitted at the press conference that he'd been against the knockout system as he felt it increased the potential for random results | photo: World Chess

In statistical terms, you should probably bet on Russia, since more than one third of the players are from Russia, though the matches Karjakin-Grischuk and Svidler-Vitiugov will cut that number before the quarterfinals. 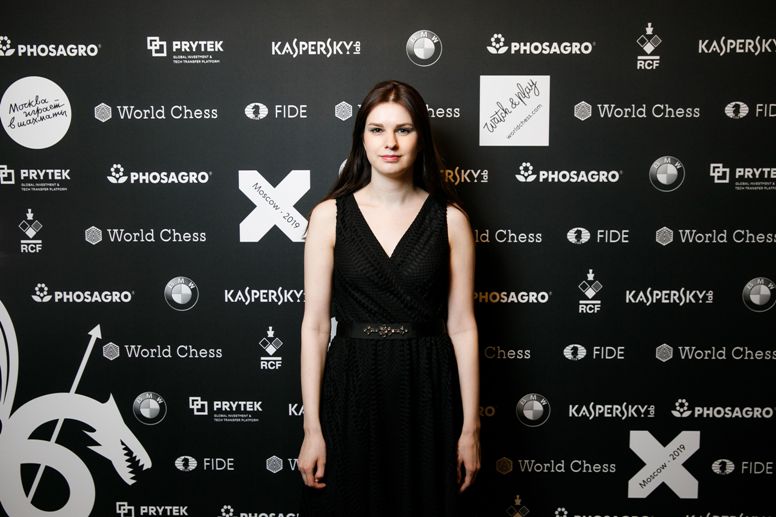 Eteri Kublashvili is the FIDE Press Officer for the tournament | photo: World Chess

Where can you watch?

Although the details are not yet finalised, we hope to broadcast all the moves live here on chess24 from 14:00 CEST on Friday 17 May onwards, with commentary in multiple languages. The official website will also of course have coverage of all the action.