Six Top 10 players turned down their FIDE Grand Prix invitations, but that still leaves Maxime Vachier-Lagrave, Levon Aronian, Hikaru Nakamura and Anish Giri topping the line-up for the four tournament series that starts in the United Arab Emirates city of Sharjah in under two weeks’ time. Moscow-based anti-virus firm Kaspersky Lab, which sponsors Sergey Karjakin individually, has also been announced as a partner of the Grand Prix series. 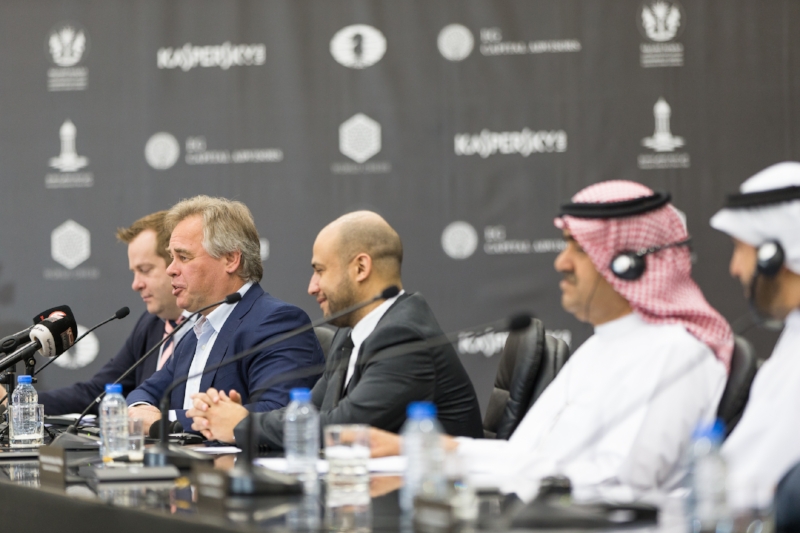 Kaspersky Lab CEO Eugene Kaspersky was the guest of honour at the opening press conference in Sharjah | photo: Agon

The 2017 FIDE Grand Prix features 24 players, who are required to play in three of the four events. Each tournament will be a 9-round Swiss Open with 18 players, with the winner taking home €20,000 (and the 18th player €2,500) of a €130,000 prize fund. That compares poorly to the $75,000 on offer for first place in the classical Grand Chess Tour events, but some of the world’s best players are willing to play since the top two finishers in the Grand Prix series qualify for the 2018 Candidates Tournament. They’ll be joined there by Sergey Karjakin, the World Cup finalists, two rating qualifiers and one organiser nominee for the 8-player tournament that will produce Magnus Carlsen’s next challenger.

The four Grand Prix events are as follows:

Less than two weeks remain before things kick off in Sharjah, and while we still don’t know the 18 players who will compete, Agon have finally released the overall 24-player line-up. It looks as follows, with the ratings and rankings taken from the February 2017 FIDE rating list:

Originally the Grand Prix regulations stated that nominees needed to have had a 2700 classical rating (or 2650 for former men’s or women’s World Champions), though that was later changed to read “2600 for former men and women national or world champions”, with a provision added to allow nominees with a 2575 rating in at least one 2016 rating list. That latter addition to the regulations seems to have been unnecessary, since Riazantsev, Saleh and Hammer have all won their national championships.

It’s not clear which of the players took advantage of the option of finding €100,000 in sponsorship in order to play, with Ernesto Inarkiev one of the few players whose participation was announced in advance after an arrangement between his Russian Republic of Ingushetia and FIDE President Kirsan Ilyumzhinov:

Some players no doubt have reason to regret the lack of a purely sporting qualification procedure, with Vassily Ivanchuk, Radek Wojtaszek, Leinier Dominguez, David Navara and Dmitry Andreikin among the absentees. The latter commented late last year:

Of course I still haven’t given up hope of getting into the FIDE Grand Prix series, but nothing to do with that depends on me.

On the other hand, the line-up ensures local players for all events except in Geneva, with Paco Vallejo in particular having been starved of elite events in recent years.

Spanish no. 1 Paco Vallejo will get to compete with the best again, and the Minorcan-born grandmaster is sure to play in the final Grand Prix on the nearby island of Mallorca | photo: David Llada

It also gives a path to the World Championship for exciting young players such as Richard Rapport and, in particular, Wei Yi. 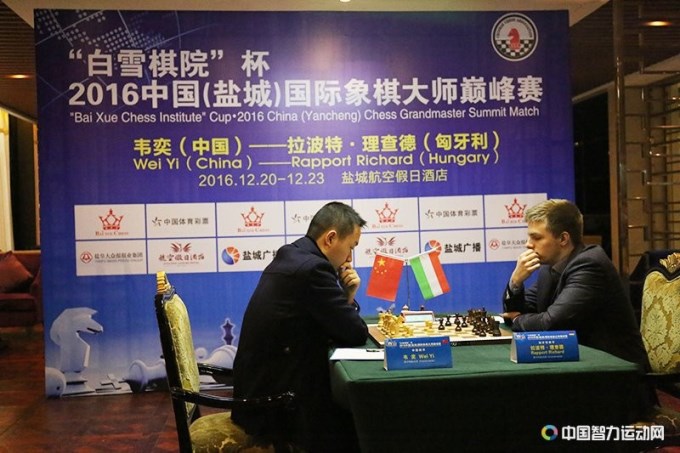 Rapport won their match in China, Wei Yi scored a wild win in their game in Tata Steel - how will they fare in the Grand Prix series? | photo: cca.imsa.cn

The other announcement was that Kaspersky Lab, who were announced as sponsors of Sergey Karjakin during the New York match, are now going to partner with FIDE and Agon for the Grand Prix, with that said to include:

This seems to be a growing trend, after Microsoft also helped Team Carlsen prepare for the match in New York:

We'll let you know more details of how we'll cover the FIDE Grand Prix when we have them.