The 2020 FIDE Candidates has been stopped today after 7 of the 14 rounds, with the second half to be completed at a later date. The escalating coronavirus pandemic around the world had made the decision to play the event look increasingly anomalous, and today was the last chance for many of the players and others involved with the tournament to get a flight out of Russia. Maxime Vachier-Lagrave and Ian Nepomniachtchi will go into the second half of the event leading by a full point on 4.5/7. 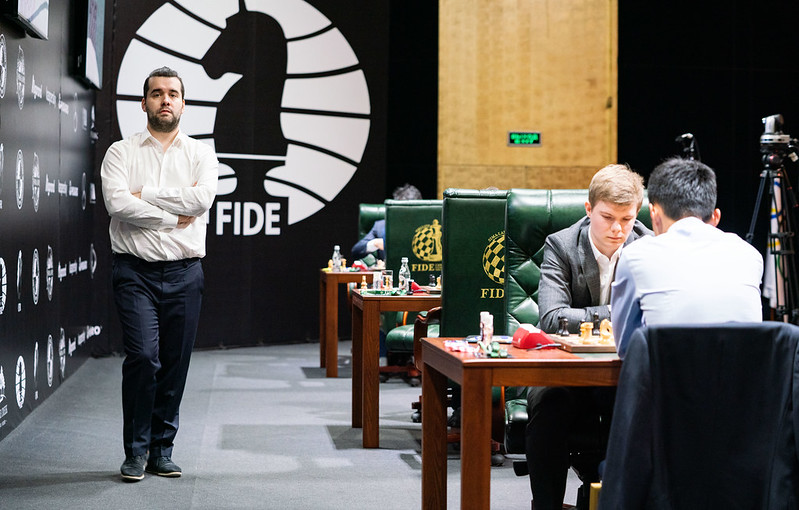 The World Chess Federation FIDE has now confirmed that the Candidates Tournament has been stopped. The official statement explains that the immediate reason is the stopping of all flights out of Russia from 27th March:

Today, the government of the Russian Federation announced that starting March 27, 2020, Russia interrupts air traffic with other countries without indicating any time frames.

FIDE cannot continue the tournament without guarantees for the players' and officials' safe and timely return home. In this situation and on the basis of clause 1.5. Rules of Candidates Tournament, the FIDE President decided to stop the tournament. It will be continued later, with the exact dates to be announced as soon, as the global situation related to the COVID-19 pandemic will allow. As it was stipulated by the special rules agreed with the players before the start of the event, the results of the 7 rounds played remain valid, and the tournament will be resumed in the same composition starting with the games of the 8th round. FIDE is grateful to the players, officials, volunteers and the entire team of organizers, including the Chess Federation of Russia and the main partner of the tournament - SIMA-Land.

The stopping of air travel out of Russia is perhaps just the straw that broke the camel’s back, however, since it had already been clear for many days that it would be very hard for many of the players to find their way home at the end of the event. Vladimir Kramnik attacked the holding of the tournament before it began, Alexander Grischuk on the opening day gave a 50% chance of it completing, and multiple players had expressed their dissatisfaction with the event continuing in post-game interviews.

Wang Hao, who reluctantly played the event, was the first to make the decision public...

...while we first learnt the tournament was stopping from Ilya Levitov, and it’s worth quoting a discussion yesterday on our chess24 Russian broadcast of Round 7 (with help from Chess-News.ru for the transcript):

Ilya Levitov: It’s a mess, simply a mess. If we’re calling things by their names. I honestly think that Dvorkovich is a great phenomenon in chess, simply as a man, but to hold this tournament is a disgrace. It simply needs to be stopped. Today. And then think about what to do next. The only move is to stop the tournament. There are decisions that you need to take, however painful they are.

Despite the brilliant endurance of Vachier-Lagrave and his somewhat philosophical attitude to life it’s clear that none of the players are at ease. Looks at how Caruana and Ding Liren are playing. They’ve never played so badly. Unless in their childhood.

Evgeny Bareev: All Caruana’s thoughts right now are on how to get home. The borders of Russia and America are closed, while he’s in Sverdlovsk…

Almira Skripchenko: It’s a fight for survival and not a Candidates Tournament.

Levitov: Over the last few days the world has totally changed, but the tournament is only at the midway point.

Bareev: Does chess have any kind of ethics?

Levitov: I asked one respected grandmaster how the participants will get home. He replied: but they won’t get home – they’ll stay with the winner and prepare him for the match! There’s some gallows humour for you.

The decision to stop the tournament was perhaps the only reasonable one, with FIDE risking not just the health of the players and others involved but also a PR disaster such as the one following a boxing event in London. Being the world’s “last remaining major sporting event” is very much a double-edged sword.

It seems at least Anish Giri should be able to make it back to the Netherlands (this is a tweet by one of the tournament’s official photographers):

It's a longer, more uncertain trip for Fabiano Caruana:

For chess fans, and especially chess fans confined to their homes or flats, it’s a heavy blow, though today at least we’re planning to go live to discuss the situation:

What happens now? Well, as mentioned in the official statement, the results so far stand, which is of course very good news for MVL and Nepomniachtchi. It’s perhaps fortunate that MVL won in Round 7 so that Nepo's advantage won’t be so great going into the second half of the tournament, but for a player who notoriously struggles to maintain his form for a long event such a postponement looks ideal:

It’s hard to know what would have happened in “normal” circumstances. As Grischuk earlier said:

Botvinnik was commenting on this, that if you make two players play while standing it’s completely unsure that the same one will win who would win while playing seated.

The main player with every right to feel aggrieved, however, is Teimour Radjabov, whose plea to postpone the tournament was rejected before it began and saw him replaced by Maxime Vachier-Lagrave. It looks like there’s no way back for the Azerbaijan player now, though he turned out to be right about how unwise it was to start the event in such circumstances.

On the other hand, few could have predicted how dramatically events would unfold in the last barely two weeks, when much of the world has gone into lockdown.

We’ll keep you updated with further news, but for now make sure to tune into our final Candidates live broadcast at 11:30 CET today!