Ding Liren, Alireza Firouzja, Fabiano Caruana, Ian Nepomniachtchi, Richard Rapport, Hikaru Nakamura, Teimour Radjabov and Jan-Krzysztof Duda start battle in Madrid on Friday June 17th for the right to play Magnus Carlsen in the 2023 World Chess Championship match. We’ve got Judit Polgar and Jan Gustafsson commentating live on all 14 rounds, with the likes of David Howell and Magnus himself set to join from time to time. 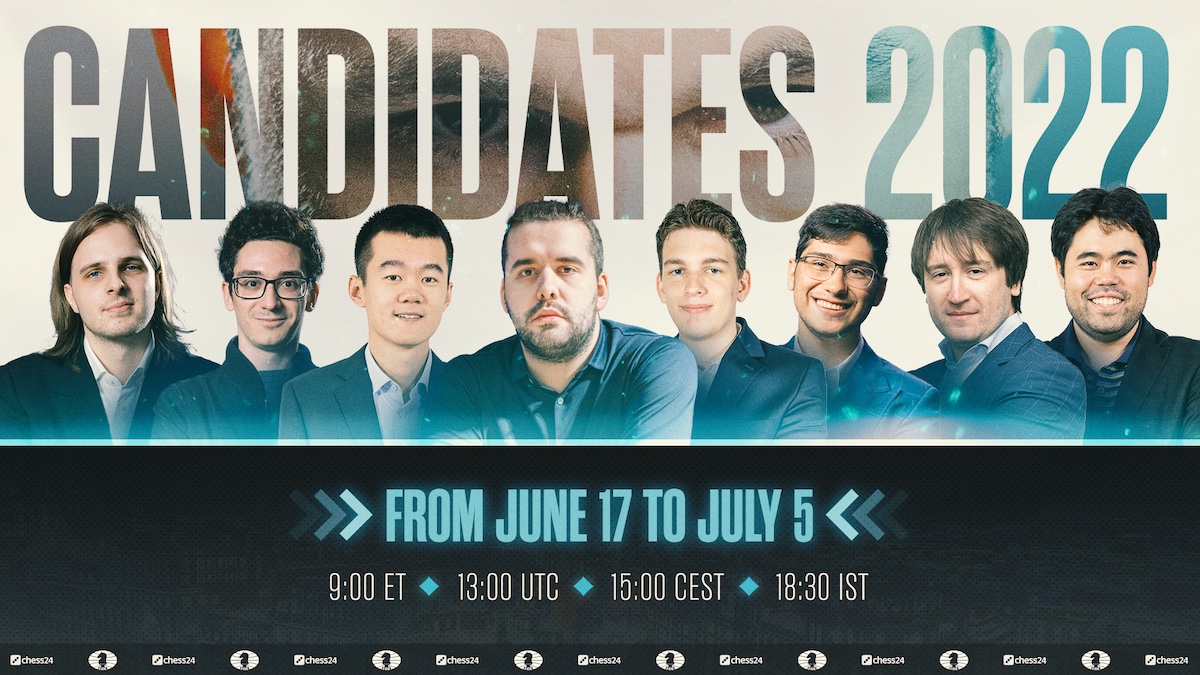 The FIDE Candidates Tournament is arguably the most anticipated chess tournament of all, with players competing for the biggest prize in chess — the chance to play a World Chess Championship match. Let’s take a look at what we can expect.

Who’s playing the FIDE Candidates Tournament and how did they qualify?

The line-up for the 2022 FIDE Candidates is formidable, and while there are some absent stars — for instance Levon Aronian and Wesley So — the lowest-rated player is 2750-rated world no. 16 Jan-Krzysztof Duda.

Although we have a dream line-up, the qualification for the Candidates was not without controversy. Teimour Radjabov gets his place after pulling out of the 2020 Candidates Tournament at the last minute over fears of a pandemic. The fact that those fears proved justified — the tournament had to be postponed for a year midway through — led FIDE to grant him a place in the 2022 Candidates… so essentially he plays based on winning the 2019 FIDE World Cup.

2021 FIDE World Cup finalist Sergey Karjakin, meanwhile, was qualified to play in the 2022 Candidates, but was stripped of his place after getting a 6-month ban for vocally supporting Russia’s invasion of Ukraine.

Ian Nepomniachtchi gained his place after playing the previous World Championship match, but some have questioned if a Russian player should be allowed to compete — and potentially earn a title match and all the positive publicity that would bring Russia — during the war. Ian immediately condemned the invasion and will play the Candidates under the FIDE flag, though he hasn’t taken the further step of switching from the Russian Chess Federation to FIDE, as many of his colleagues have. 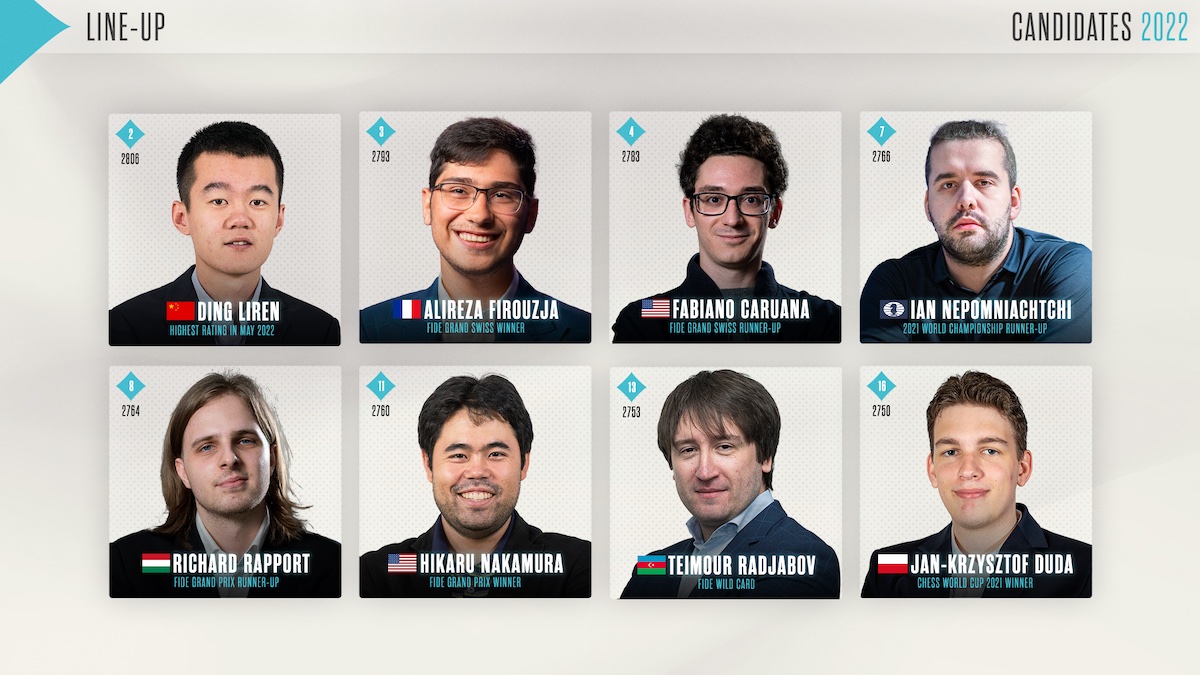 Sergey Karjakin’s place, meanwhile, was given to a ratings qualifier, Ding Liren, with the Chinese no. 1 also having to fulfil the requirement of playing at least 30 classical games in the year before May 2022. That led to an incredible month where Ding played 28 games in as many days in hastily arranged tournaments in China.

Ding did everything by the book, but it’s notable that FIDE have changed the book for future qualification, requiring more games and for most of them to be played in events with players from four or more federations.

There was no controversy elsewhere, unless you count Hikaru Nakamura being given a wild card to the Grand Prix series. He completely justified that decision by going on to win, ahead of Richard Rapport. Richard is currently planning to switch to the Romanian Chess Federation, but in the tournament he’ll play under the flag of his native Hungary. 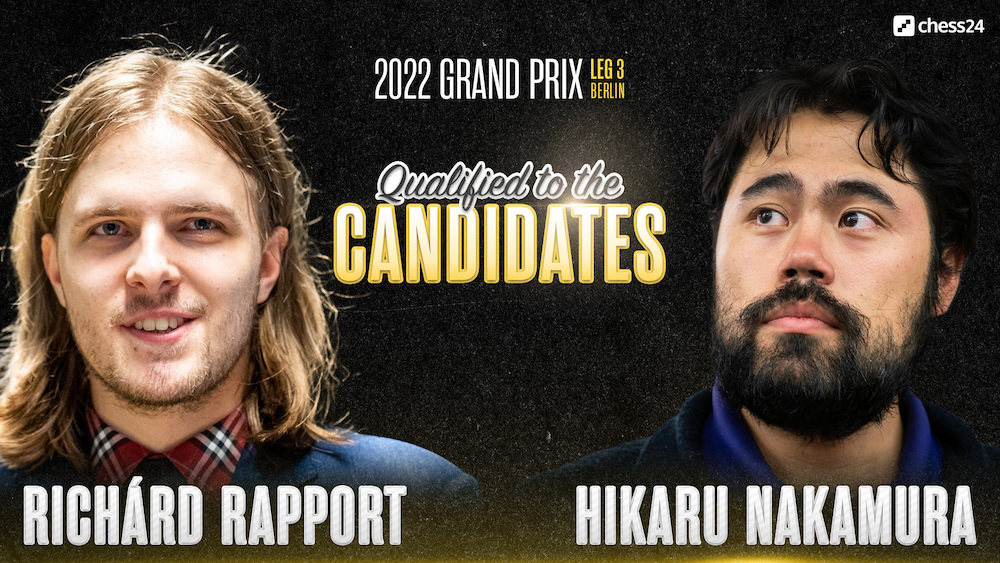 The potentially random FIDE Grand Swiss achieved the perfect result of giving a place for runner-up and world no. 4, Fabiano Caruana, and for the winner and world no. 3 Alireza Firouzja. The Iranian-born French star will turn 19 before Round 2, and has the potential to become the youngest undisputed Chess World Champion in history in 2023. 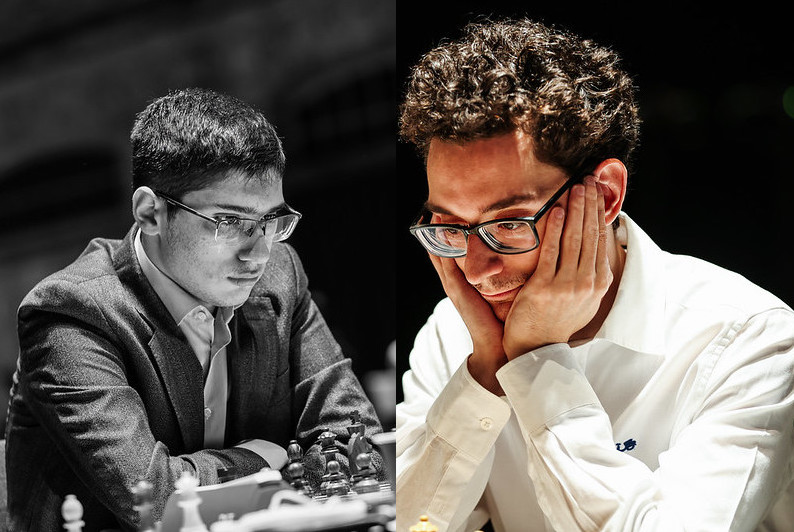 Jan-Krzysztof Duda completes the line-up after winning the 2021 World Cup — beating Magnus Carlsen in the semi-finals was the perfect warm-up for an event where he’s playing for the right to face Magnus.

When does the FIDE Candidates Tournament start? 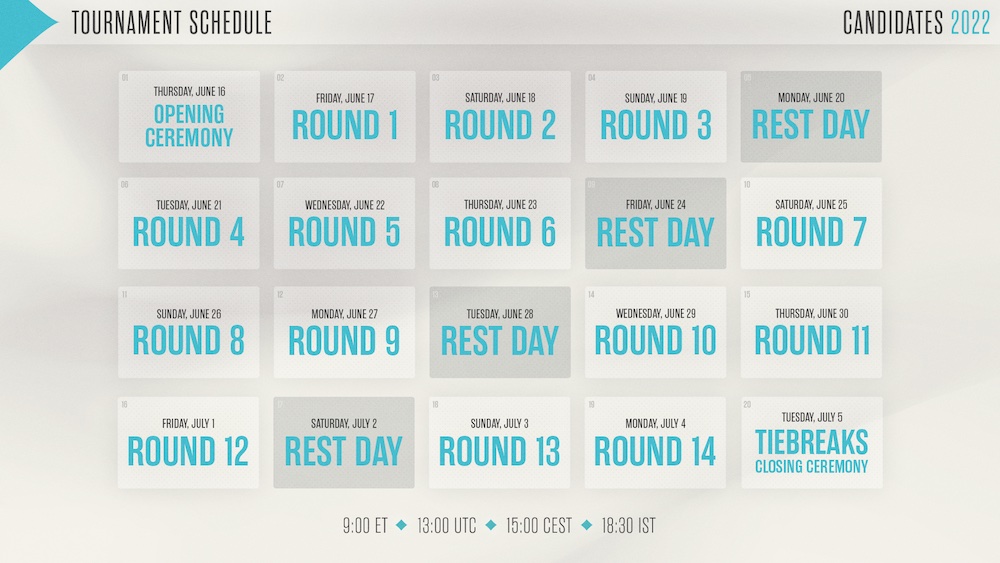 The pairings are already published for all 14 rounds and you can check them out below.

Where is the FIDE Candidates Tournament being played?

The 2022 FIDE Candidates is taking place in the Palacio de Santoña in the centre of the Spanish capital, Madrid. 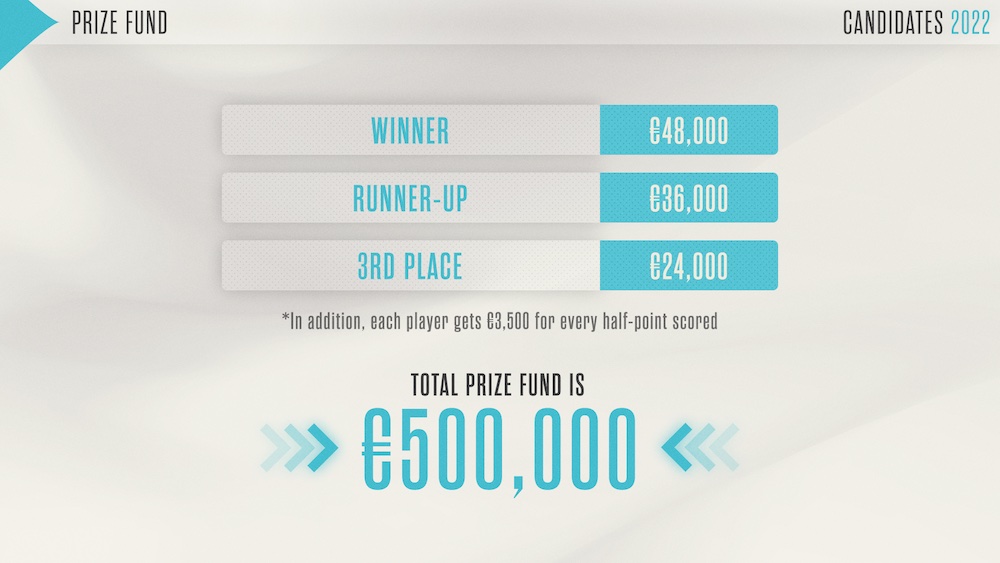 Essentially, however, all that matters is the World Championship match. Traditionally you would say that there’s one winner and seven losers in the Candidates, but this time round that might not be true!

World Champion Magnus Carlsen has revealed that he may decline to go through the ordeal of preparing for and playing another World Championship match — at least unless the Candidates is won by a player who inspires him. The one he’s named is Alireza Firouzja.

If Magnus does drop out, then 2nd place in the Candidates will be enough to reach a match against the player who finished 1st. If another player refused to play the match 3rd could also matter, while if there are mass refusals the next spot would go to the highest rated player on the January 2023 rating list.

What’s the format for the FIDE Candidates Tournament?

The main event is a 14-round double-round robin where the players face each other twice, with reversed colours for the second game. The classical time control is the same one as used in the 2021 World Championship match, which means that in contrast to the last Candidates there’s no increment before move 61. So even though the players get the same total amount of time, we could end up with players losing on time. 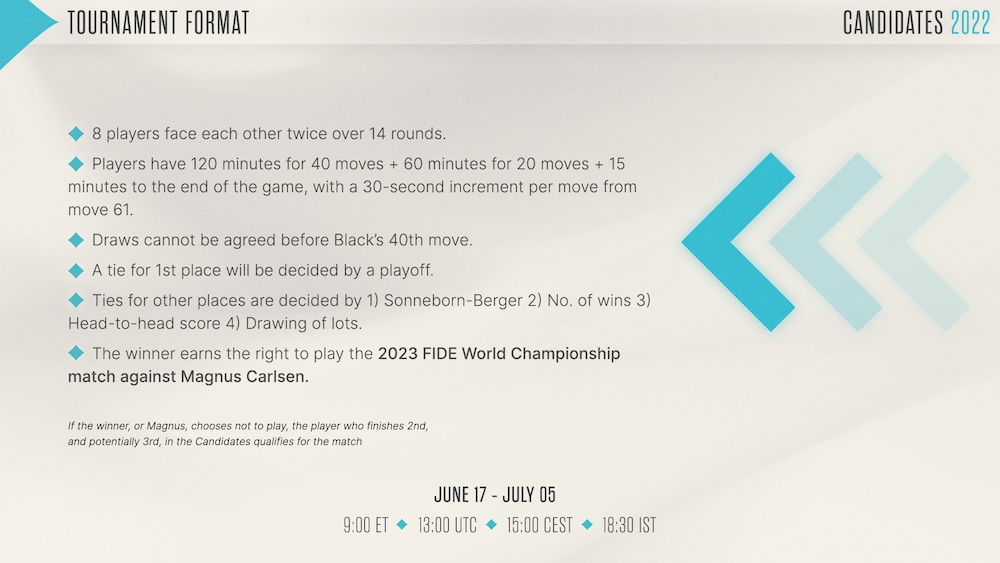 The big change this year, however, is that if players tie for 1st, as for instance Magnus Carlsen and Vladimir Kramnik did in 2013, we’ll get a playoff, regardless of their other tiebreaks such as no. of wins. The playoff format, considering how much is at stake and that a day is set aside for tiebreaks, is surprisingly fast. It could be over in just two quick rapid games, unlike the four slower games in the World Championship playoff. 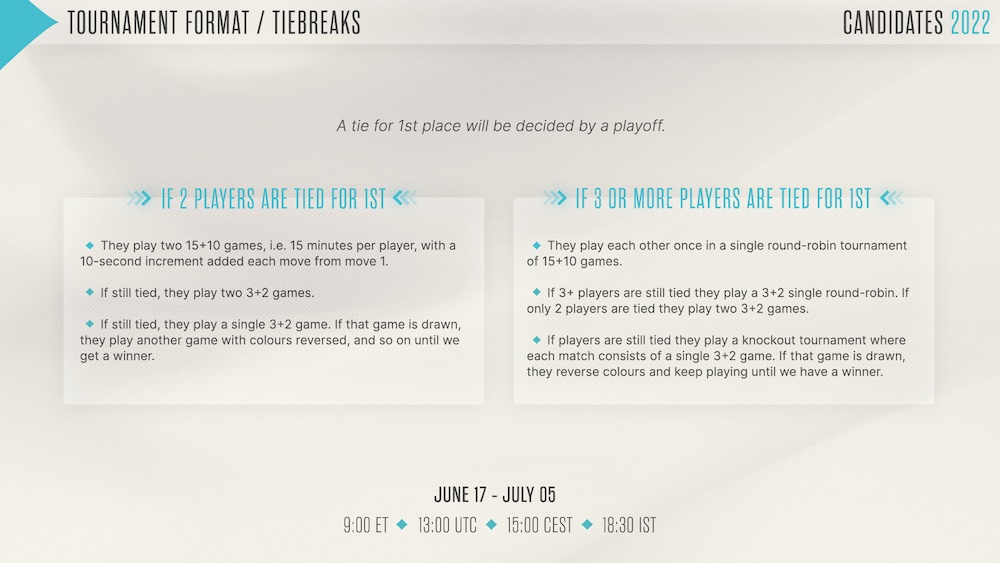 The dreaded qualifying spot being decided by “mathematical” tiebreaks could still be a factor, however, since as we’ve seen, 2nd place will be hugely important if Magnus decides not to play the match. But a tie for 2nd will be decided by 1) Sonneborn-Berger, then 2) total no. of wins, then 3) head-to-head, and even, potentially, 4) a drawing of lots.

Where can I watch the FIDE Candidates Tournament?

We’ll have all the FIDE Candidates action live here on chess24 and we’re delighted to be able to welcome back the greatest female player of all time, Judit Polgar! She’ll be commentating on all 14 rounds together with chess24’s Team Magnus guru Jan Gustafsson. 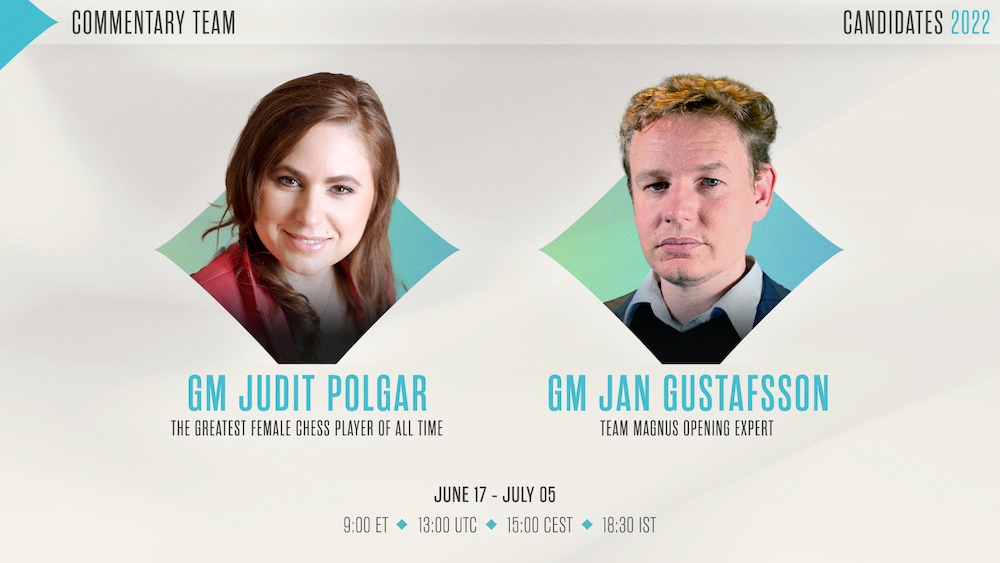 We’re also hoping to have some very special guests, including World Chess Champion Magnus Carlsen, the man they’re all competing for the right to play. David Howell is another top player and commentator lined up for some cameo roles.

We’ve got some more previews coming up, but there’s not long to wait now — the FIDE Candidates Tournament kicks off at 15:00 CEST this Friday, June 17!