FIDE Candidates to resume after 389 days

FIDE has today announced that the Candidates Tournament in Yekaterinburg, Russia, will resume with the 8th round taking place on April 19th, 389 days after the event was stopped midway. The chess world should finally get to know who Magnus Carlsen will face in his 5th World Championship match, scheduled for Dubai in November. 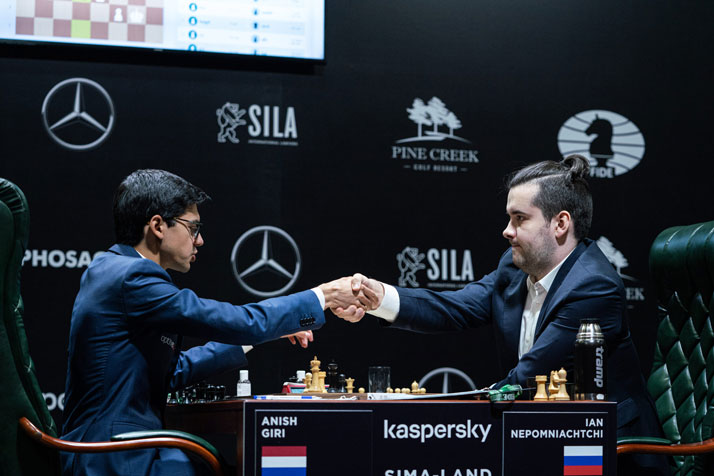 Ian Nepomniachtchi got off to a flying start when he defeated Anish Giri with Black in Round 1 of the Candidates in 2020. The two will face each other with colours reversed in Round 8 | photo: Lennart Ootes, official website

Today FIDE has announced that the event will resume in Yekaterinburg on April 18th, with Round 8 starting on April 19th and possible (but highly unlikely) tiebreaks on April 28th. There will be rest days on April 22nd, 25th, after Rounds 10 and 12.

It's welcome news for chess fans, who are eagerly waiting to find out who Magnus Carlsen will face in his fifth World Championship match, recently scheduled to take place in Dubai in November and December.

A difficult issue for FIDE has been dealing with the Chinese authorities and their ban on citizens leaving the country. The Chinese Chess Federation has now reportedly given Wang Hao and Ding Liren the green light to travel abroad, but the players are still awaiting final approval from the Chinese government.

The FIDE Candidates Tournament was stopped midway in March 2020, with Maxime Vachier-Lagrave and Ian Nepomniachtchi in the lead on 4.5/7. 389 days later, the Candidates will resume with the following standings:

When the pandemic made it impossible to resume the event in November as initially planned, FIDE announced in October that it would be moved to spring 2021.


In an interview with Kaja Snare on the Opera Euro Rapid broadcast, FIDE President Arkady Dvorkovich spoke about the difficult decision to postpone the event, one that he made on his own birthday on March 26th.

While we could name the decision strange and unfair, I still believe we had to take this chance to run the Candidates Tournament. We did our best to do it properly.

Dvorkovich said they had been in contact with all the players, who were happy to come back. The press release also states that all the players have agreed to and expressed their readiness to take part in the event.

Wang Hao, currently sharing 3rd place on 3.5 points, spoke to chess24 last week about the resumption. The Chinese 31-year-old has been particularly concerned and lashed out at FIDE in October over how the situation was handled. 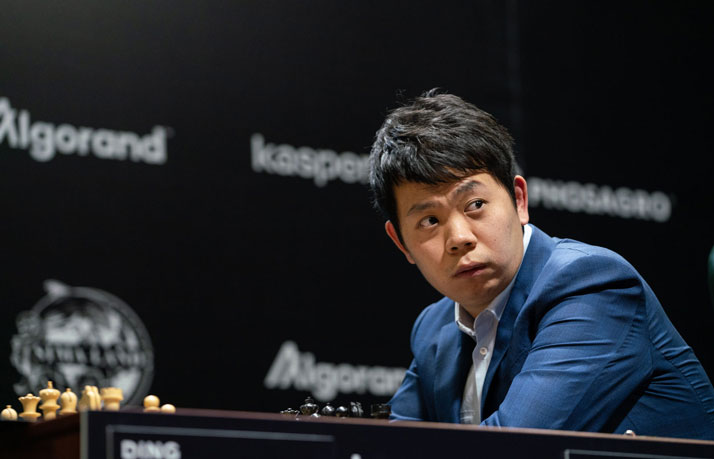 Wang Hao made it clear he is not among the most ambitious players in the field, but he is still in contention, one point behind leaders Ian Nepomniachtchi and Maxime Vachier-Lagrave | photo: Lennart Ootes, official website

Hao says he has already had his first dose of a vaccine, but there are still some travel issues that need to be resolved, such as a direct flight from Beijing to Moscow.

COVID will not be very threatening to me once I finish the second shot. But still, there are some obstacles for international travel. I will see what’s happening and make my plans.

He confirms he will “probably” play if those issues are dealt with.

Another player who spoke about the Candidates is Maxime Vachier-Lagrave, who had a disastrous event in Wijk aan Zee, finishing second last in the event. The leader on 4.5 points doesn't seem too concerned, though.

It's nothing great, for sure. I would've hoped to do better clearly. At the same time, I am not taking things as catastrophic. It's definitely a disappointment, but it's better that it's happening now than in the Candidates. I'll try to work on my game after the tournament and see what has not gone well and what I should improve.

Vachier-Lagrave thinks the second half of the Candidates won't be the same as in March last year.

It's going to be a very different tournament. The players who were not in a good shape will come back in a different shape. Maybe some players that were out of contention, or at least behind, will rise to the challenge. But I am hoping to resume the tournament with the same kind of shape and the same energy as I had last time, and that will be my main objective.