22-year-old Russian GM Vladimir Fedoseev took clear first place at the prestigious Aeroflot Open, played from February 22nd to March 1st at the Cosmos Hotel in Moscow. Fedoseev obtained the title thanks to a great performance with White, as he won all four games he played with this color. This important victory also got him a place at the traditional Dortmund supertournament in July. 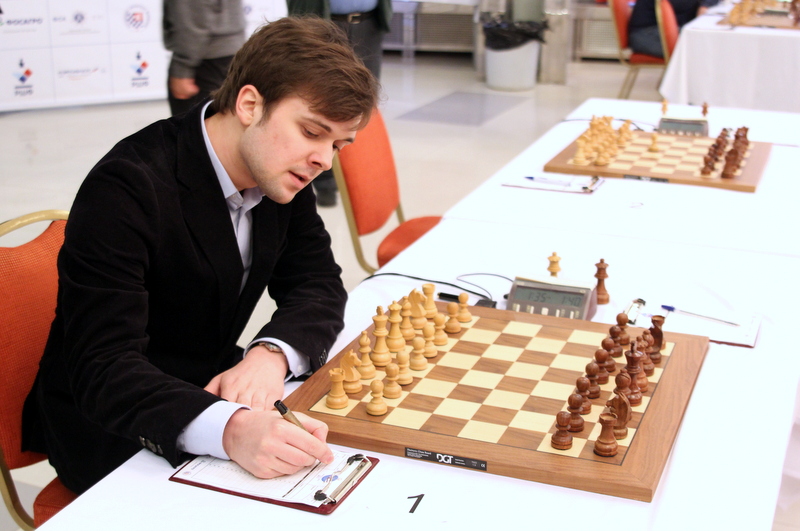 Vladimir Fedoseev is one of the strongest young GMs from Russia. At 22, he has already been in the 2650-2700 rating gap for three years, and this victory might boost him to cross the 2700 mark. In Moscow, he won thanks to his great positional understanding. Let us see some of the positions from the second half of the event that show the Russian's fine technique.

The position is more or less balanced and Fedoseev, with White against Najer, needs to look for an idea to improve his pieces. The kingside seems to be dominated by Black and there's tension in the center. An idea could be 23.b4 to gain space with c5, but Black counts on the intermediate 23...dxc4!

Something similar would happen if White tries 23.e4, attacking the g5-square. Taking this into account, Fedoseev avoided all the attacks on his d3-bishop and overprotected h3 with 23.Bf1! A fine move that threatens to advance on the queenside. More often than not this move would go unnoticed, as the evaluation does not change much, but it is a detail that show the Russian's great positional understanding. After 23...dxc4 (23...e5 was not possible directly due to 24.e4!) 24.bxc4 e5 Najer thought he was fine... but once again White found a subtlety that deserves another diagram.

If White keeps going with his plan of gaining space on the queenside with 25.b4, Najer would have the chance to sacrifice an exchange on d2 and take on b4 — the Black knight will get to c5 and the compensation will be sufficient. Fedoseev avoided this idea by going back with the bishop: 25.Bd3! Now b4 cannot be avoided. Later on, the bishop went back to f1 to protect h3!

We must note that Fedoseev got a little lucky when he survived against Khismatullin in an endgame where he was three pawns down! In the eight round, however, he got a very convincing win from a seemingly quiet position against Matlakov.

This position might easily be found in a strategic manual! What is White's plan? The rooks have taken the open files, while the knight is dominating but unstable. Without the support of any pawn, what can we do? Black wants to play Bb7 to kick off the knight, so White needs to hurry! The key move is 27.g3! creating possible attacks against the Black king. Yes, king safety is also important in endgames! A less experienced player might think that it is not a good idea to eliminate the doubled f4-pawn, but this pawn cannot be considered as weak yet! Matlakov exchanged on g3 and found out that, if he plays Bb7, White can give a check on d4 and the Black king cannot go to e5.

I recommend you to check the whole solution in our broadcast (you can make your own moves to check your ideas). It was a great example of the importance of king safety in endgames. Bravo Fedoseev!

The final standings include a surprise that we should keep an eye on...

...in ninth place, where we find 13-year-old Iranian IM Alireza Firouzja, who got a 2746 rating performance, demonstrating that he can play way above his current rating. Do not forget that name!

It was another very strong edition of the traditional open. We hope that Aeroflot keeps supporting chess as it has done so far!