Vladimir Fedoseev is on course for a quarterfinal against Hikaru Nakamura after knocking out 17-year-old rising star Alireza Firouzja in an incredibly tight match that almost went to an Armageddon decider. Alireza fell behind early on and never took the lead once, but that didn’t stop him winning the final two bullet games on demand to force a playoff. It was only in the fourth and final normal game that Fedoseev finally got over the line for what Alireza admitted was “a deserved win”. 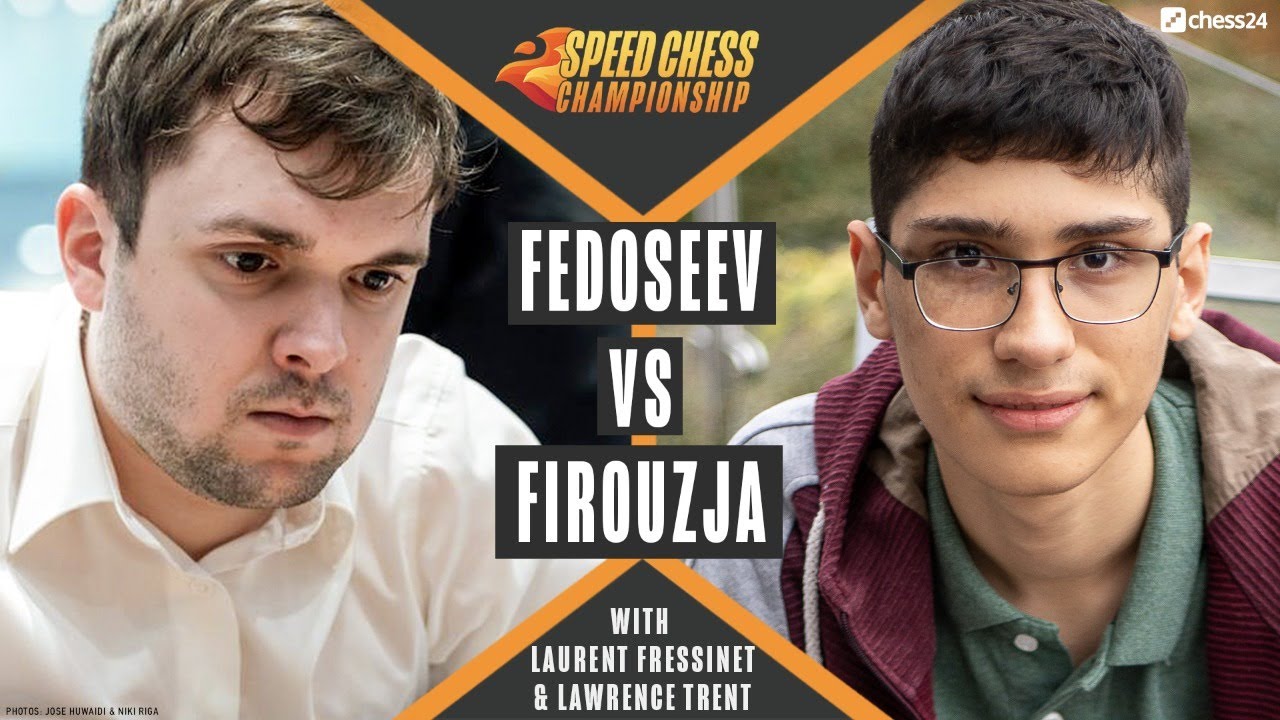 The Fedoseev vs. Firouzja Speed Chess Championship match took place on Chess.com on Wednesday and you can replay all the games using the selector below:

For commentary here on chess24 we had two near namesakes, the Anglo-Gallic duo of Lawrence Trent and Laurent Fressinet.

You can relive their commentary below.

A great start for Fedoseev

Going into the match Banter Blitz Cup winner Alireza Firouzja had to be the favourite, but in the very first game he misplayed a winning position and fell behind. That seemed like nothing special at the time – it was the start of a 3-hour match – but remarkably after failing to take an early lead Alireza would never once take the lead in the match.

There were more unusual stats to follow. Fedoseev went on to win Game 2 as well, which turned out to be the only time in the match he won two games in a row! 24…Ne6? was a blunder by Alireza:

Fedoseev was pressing in Game 3 before winning again in Game 4, meaning that he’d taken a 3-point lead after just four games.

Our commentators were puzzling over how to pronounce “Alireza”…

…but it took over an hour and 7 games for the Iranian prodigy, who now lives in Chartres, France, to finally pick up a win. He almost made it two in a row, but a crazy finish saw Fedoseev survive Game 8.

The 9th and final 5-minute game was one both players were winning at some point, but remarkably we ended up with more draws than decisive results in that section. Fedoseev had a 5.5:3.5 lead.

There was another draw in the first 3-minute game when Fedoseev missed a win, but that was the only draw at that time control! Firouzja later commented:

That was a slightly curious statement, since in the 3-minute games Alireza played 1.Nf3 and won three games in a row with the white pieces. The problem, however, was that Fedoseev was also winning with White, outplaying his young opponent in simplified endings.

But then, 16 games into the match, Alireza finally won two games in a row to level the scores. 23.Ra7? was a blunder.

26.Kg2 Nxd2 and Black had not just won a piece but was forking White’s rook and queen. It seemed as though the tide had turned and surely Fedoseev would now crumble. Alireza had all the momentum and was about to play his speciality, bullet chess.

Vladimir himself, however, noted that the closer the score got the better he played, and he fought back from a tough position in the next game to post a stylish victory with the black pieces. He went into the 1+1 games with a 9:8 lead.

Any thoughts that bullet would belong to Firouzja soon vanished when he couldn’t convert a good position in the first bullet game and then simply put a knight en prise.

Wins were traded after that, but Fedoseev’s powerful attacking win in the 5th bullet game looked like it would be decisive.

The next game ended in a draw, but could have been won by either player. The most interesting moment, however, was perhaps at the very end, when a more cynical player than Fedoseev might have played on in a position with just queens and kings on the board – not to try and win the game, of course, but just to run down the match clock.

As it was, Fedoseev decided to play fair and take an immediate draw. That left four minutes, about enough for two must-win games for Alireza. In the first, by move 26, he was dead lost.

This was the moment, however, that an amazing king walk began with 26…Kd7 and the black king following a winding path to a4 over the next six moves. That would see Black not only survive but win the game after 40.Kb1?

40…Nc3+! 41.Nxc3 Bxf3 White resigns. Fedoseev then realised there would be another game for his opponent to level the scores: “I’m also feeling sick when I realised that it’s some 10 seconds on the clock to play one more game in the bullet portion.”

In the final game Fedoseev won a piece and looked a huge favourite to get the win or draw he needed, but it seemed destiny was on the youngster’s side. Firouzja found a way to win and level the scores,

That meant we faced another four bullet games followed, potentially, by Armageddon. And again it was a familiar story – tight games, fine technique from Fedoseev and no-one able to put together a string of wins. A draw in the first game was followed by two wins for Black, with the players and commentators running on fumes by this point!

It all came down to the final bullet game. Nominally Alireza was the favourite with the white pieces, but it’s true that in this portion of the match 1.Nf3 failed him, or at least 18.Nh4? did. That ran into 18…Be6! 19.Qc2 Ng4!

There are some positions even as gifted a tactician as Firouzja can’t wriggle out of, and this was one of them. He finally conceded defeat on move 31, with the white king under siege.

So Alireza Firouzja was out, though the fact he kept the match so close despite clearly having a bad day at the office was still testimony to his strength. For Vladimir Fedoseev, however, the “reward” is a quarterfinal match against Hikaru Nakamura, assuming the world blitz no. 1 can overcome 20-year-old Armenian Grandmaster Haik Martirosyan. 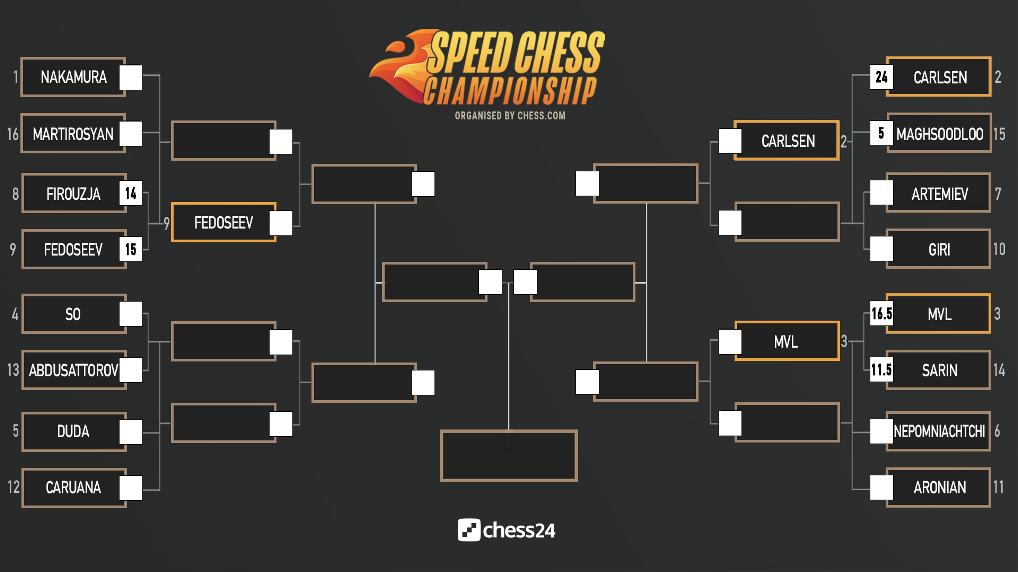 That match takes place on November 12th, while the next scheduled match is So-Abdusattorov on Sunday November 8th. You’ll be able to follow all the action live here on chess24!