Fedoseev on Dortmund and his World Cup dreams

22-year old Russian Grandmaster Vladimir Fedoseev has had a spectacular year, climbing 73 rating points and 68 places since January to reach 2731 and 28th place on the August FIDE rating list. He recently finished 2nd in Dortmund after beating Vladimir Kramnik in the first round and talked about his performance in an interview with Sport-Express. He revealed he has a two-year plan to break into the Top 10, but is also dreaming of qualifying for the Candidates Tournament from the World Cup in one month’s time. 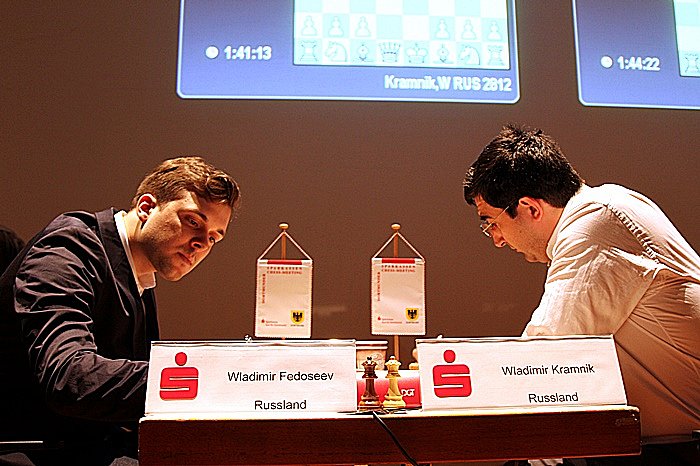 Vladimir Fedoseev was talking to Dmitry Somov for Sport-Express:

How did you achieve your recent success? After all, you were running the risk of remaining a “promising player”?

This year has been special for me. I immediately managed to start well by winning the Aeroflot Open, which created a special spirit that is still helping me now. Perhaps my long-term work with my coach Alexander Khalifman is beginning to pay off, as well as the work with some other people who have joined me this year.

How did you feel about being invited onto the Russian team?

To be honest, I was very surprised and motivated. I really wanted to become a World Champion with the Russian team, and it has to be said that the guys playing for the national team were also very well-known to me after playing for “Bronze Horseman” in the Russian Team Championship. We had a wonderful team in Khanty-Mansiysk!

Were you very upset after you lost in the decisive game of the World Championship to Li Chao?


Extremely! It was upsetting to lose the most important game of the Championship in the most important match – I really didn’t want to let the guys down. It was painful to look at the way I played that day. I think I didn’t handle the nerves, but I tried to resolve that problem a day later and at the end of the match with India I contributed an important win, which doesn’t, however, in any way justify the terrible chess I played in the match against China.

What was your mood when you flew to Dortmund?

I set off for Dortmund with my coach, ex-World Champion Alexander Khalifman, who I’ve been working with since 2011. For us, however, spending such a tournament together was almost a first, and therefore I was really hoping that we’d handle the stress and end up with the best possible result.

The first game with Black against Kramnik – was that your first encounter? How did you prepare and was there euphoria after the victory?

I managed to guess the direction of my opponent’s thoughts and I turned out to be well-prepared for the game, which was the first of my career against that truly legendary chess player. I didn’t expect I’d be able to win, particularly with Black, but it was fantastic! The whole hall applauded after Vladimir stopped the clocks. After the game I immediately left to prepare for the next encounter and really wanted to beat the German as well in the next game – it’s not that I didn’t take the second game seriously. As for euphoria, perhaps there was that in some kind of hidden form – I didn’t manage to avoid that.


What happened in the second game? 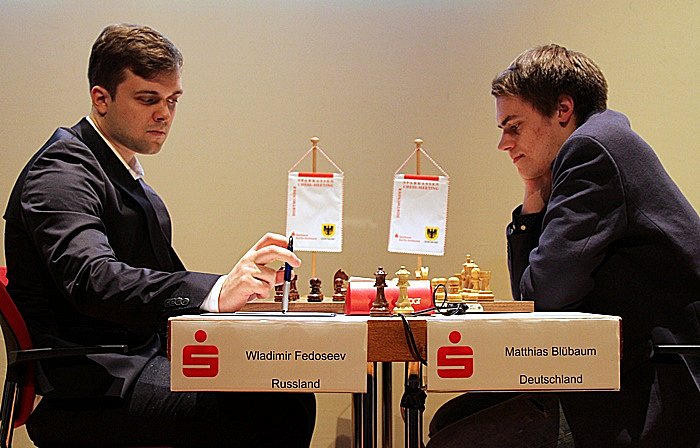 The loss to Matthias Bluebaum in Round 2 was a cold shower for Fedoseev | photo: Georgios Souleidis, official website

Total stupor and shock. It all went downhill. The opening didn’t work out and my sense of danger let me down. Absolute Sofia Rules were also in effect, which meant the players had no right to offer draws. So offering a draw at the moment things hadn’t gone well wasn’t allowed, and in the end I suffered a logical defeat, which greatly altered the balance of the tournament. It was then that I went up to my coach, who I’m used to calling “boss”, with the words: “Boss, it’s all gone wrong, boss”! The loss made it much tougher to fight for first place. 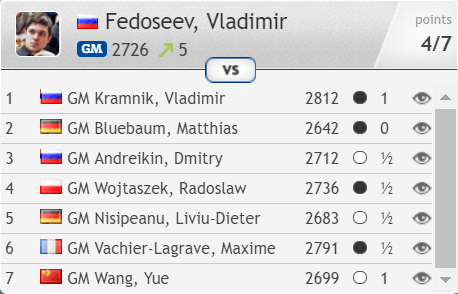 Are you satisfied with the result in Dortmund?

I can’t say I’m entirely satisfied, since as a sportsman I always want to be first, and I particularly wanted to take the top prize after the victory at the start over Kramnik. It seemed to me then that I could move mountains and score a big plus, but already after the second round the situation had changed, and I should probably class the final result as good.

What are you expecting from the World Cup?

I believe in myself. I’ll be ready and I hope no-one will be able to stop me!

When are you planning to get into the Top 10 and fight for the crown?

I’m preparing to do that in the next couple of years, but I’ll be happy if in the 2017 World Cup I already manage to become one of the Candidates for the World Championship. Of course that won’t be easy given the reigning World Cup holder Sergey Karjakin has taken the decision to defend his title, while the reigning World Champion Magnus Carlsen has taken the decision to try and take that title from Sergey. But I believe in myself even when I sit down against such eminent opponents. I can’t wait for the pairings tree in order to learn my opponents and prepare.

Are you inspired by Sergey Karjakin’s path? Not only as a participant in the World Championship match, but as a chess promoter?