Daniil Dubov was again the hero as Russia went into the European Team Championship rest day as the leaders in both the Open and the Women’s sections. The women are the sole leaders after defeating their key rivals Georgia, while the men are joined by Vassily Ivanchuk’s Ukraine, who they play in Round 6. Anish Giri continues to entertain but the chances of the Netherlands have faded after they lost close matches to England and then Germany. 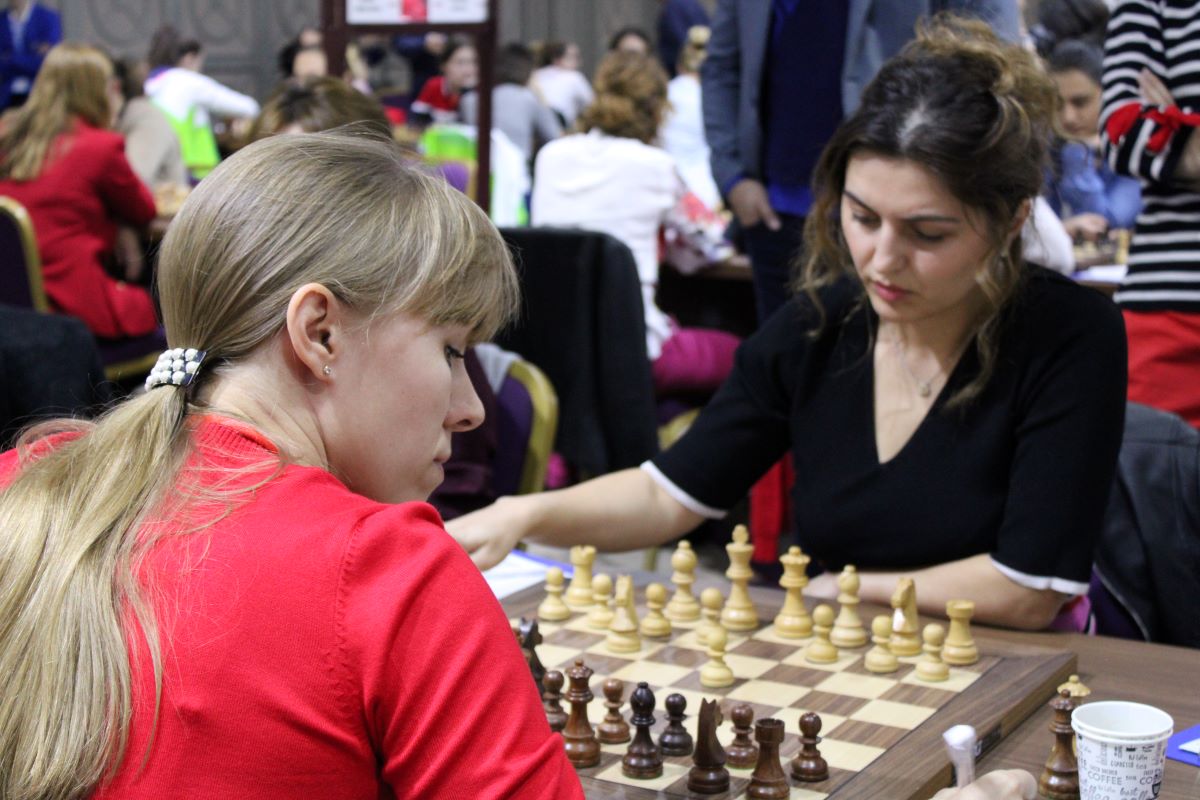 Olga Girya and Bela Khotenashvili drew but a win for Valentina Gunina saw Russia take a huge step towards winning the European Women's Team Championship title for a 3rd time in a row | photo: official website

Top seeds Russia started badly in Batumi as they lost two games on the way to a shock draw against Denmark, but since then they’ve scored a perfect 8/8. 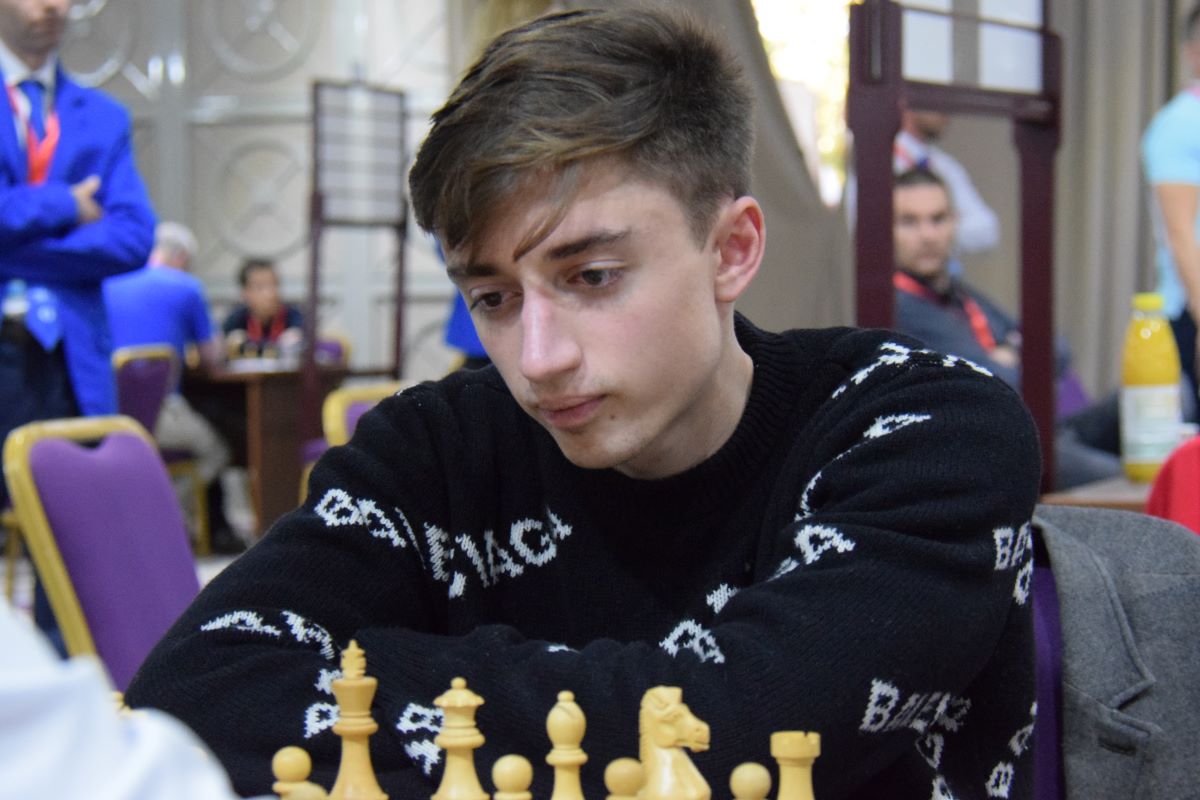 After a tough Grand Swiss Daniil Dubov has starred for Russia in Batumi | photo: official website

In Round 4 they swept aside Turkey 3.5:0.5, while in Round 5 they edged out traditional team chess masters Armenia 2.5:1.5. Daniil Dubov scored the only win as he moved to 3.5/4 after gaining an early edge against Arman Pashikian with the Dutch Defence, while Nikita Vitiugov held a difficult queen endgame against Gabriel Sargissian. 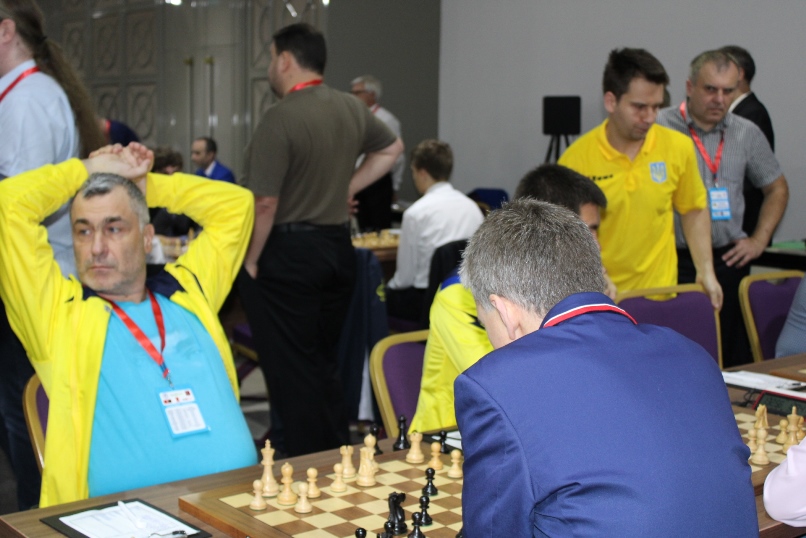 Vassily Ivanchuk and Mickey Adams drew on the top board | photo: official website

Armenia had previously held Ukraine to their only draw in Round 4, but Vassily Ivanchuk’s side set up a clash of the leaders against Russia by beating England 2.5:1.5 in Round 5, despite a fine start for 2nd seeds England:

Here Gawain Jones sealed victory over Vladimir Onischuk with 31.Be6! and Black resigned, since 31…Qxe6 runs into 32.Qd4+ and Black has to give up his queen and then bishop to stave off mate.

Things went wrong after that for England, however, as Luke McShane collapsed against Yuriy Kuzubov and David Howell went astray in time trouble against Andrei Volokitin:

The correct move-order was 33…Rb1+! 34.Kg2 d4+ and it seems the d-pawn is so strong White has to give perpetual check or find another way to force a draw. After 33…d4?! immediately the white king was able to move towards the d-pawn (after White took on g7) and Black was facing an uphill struggle which he ultimately lost.

Two teams are one point off the lead. The surprise package is Slovenia, who notably beat Georgia in Round 4 after Baadur Jobava played 1.b3 and found himself dead lost in 15 moves against Luka Lenic! The other team is Germany, who beat Greece in Round 4 and then won a dramatic match against the Netherlands in Round 5:

The one draw was anything but dull, with Anish Giri confessing:

I felt I got a little bit outplayed already because I missed a few things – he sacrificed the exchange, which was very strong. I didn’t see that - I wouldn’t have allowed it if I’d seen it.

Giri sensed during the game that his sacrifice hadn’t been entirely sound, and indeed after 19…gxh6 20.Qh5 Bd7 21.Ra3 the computers think Black is on top:

Here’s Giri talking about that game and the match (which was still in progress):

He described it as “depressing”, since Erwin l’Ami was worse early on against Matthias Bluebaum and would indeed go on to lose a third game in a row, but you can’t say the Dutch weren’t given chances. First there was an amnesty Giri pointed out on his Instagram channel:

If Daniel Fridman had played 17…Qxc5! he’d have been either an exchange up or simply have had a much better rook endgame after 18.Bxc5 Rxf3 19.gxf3 Rxc5. It would certainly have been impossible to lose. The position after the almost instantly played 17…Rxc5?! was also one that looked very hard for Black to lose, but somehow Jorden van Foreest went on to win with the white pieces. 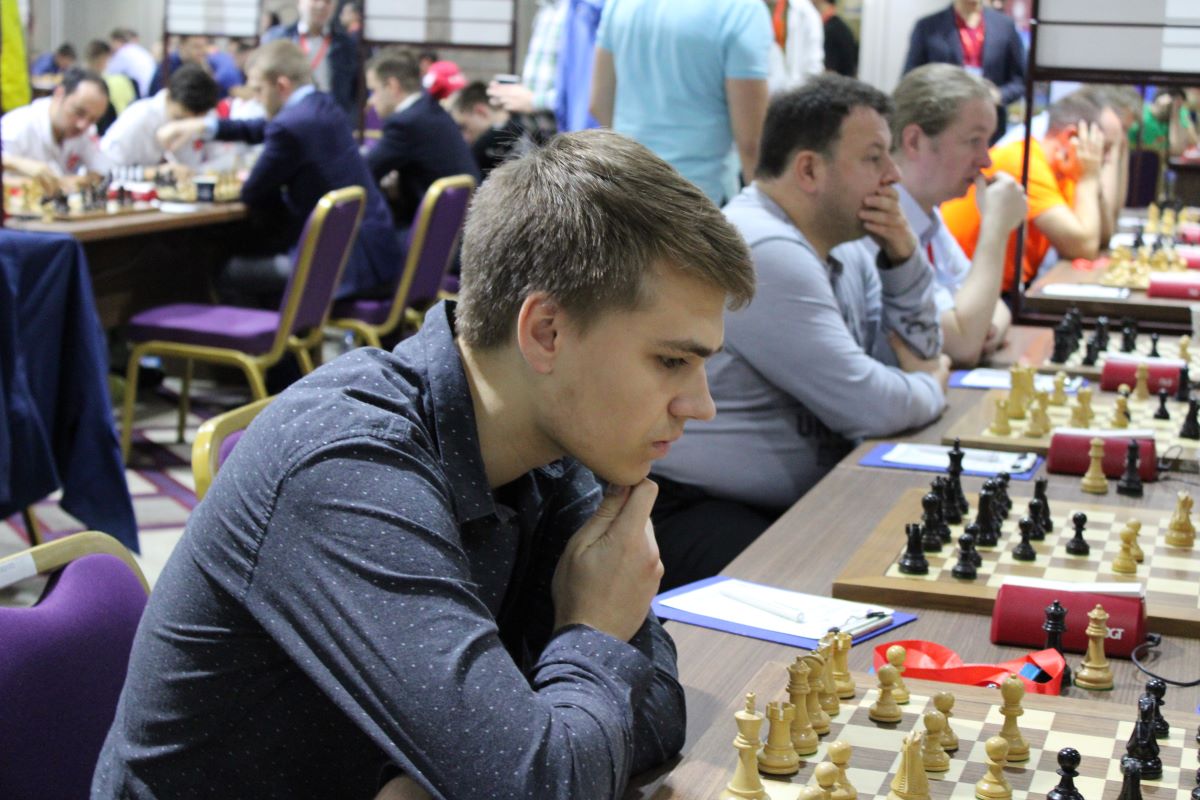 That seemed to have saved the match for the Netherlands, but 22-year-old Rasmus Svane, who has been coached in the past by Dutch Team Captain Jan Gustafsson, managed to win a study-like opposite-coloured bishop endgame against Erik van den Doel:

They’d earned that rest with an entertaining 2:2 draw in Round 5. Anish Giri mentioned that France, “have some child on board 3, who seems to be very strong” and 12-year-old Marc Maurizzi showed he was scared of nothing when he took on Alexei Shirov:

He was actually doing well here with White if he simply retained the b3-bishop or ensured it was exchanged for another piece, but instead he went for some real “fire-on-board” with 14.e4?! cxb3 15.e5 Nfd5 16.e6 – it was a spectacular try, but he’d probably picked the wrong person to attempt it against and Alexei brilliantly refuted the attack to pick up a full point.

The match was drawn after Christian Bauer got to play the kind of move we all dream about against Manuel Perez: 32…Nf2+!

Here are the standings at the top after 5 rounds (note the first tiebreak is not game points but the somewhat notorious "Olympiad Sonneborn-Berger"):

In the women’s section favourites Russia have a perfect 10/10 and a 2-point lead over Serbia, Azerbaijan and Georgia. It’s hard to see them being stopped after Valentina Gunina scored the only win in a 2.5:1.5 win over 2nd seeds Georgia. 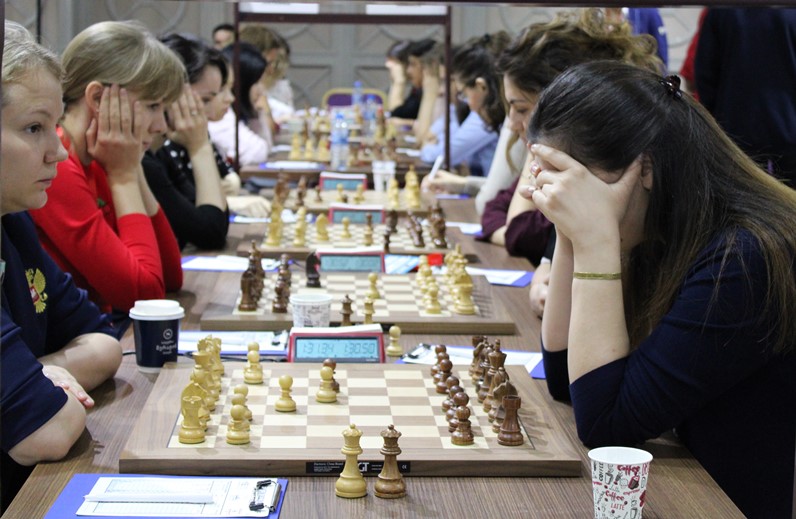 Valentina Gunina is unpredictable, but she got the vital win against Georgia | photo: official website 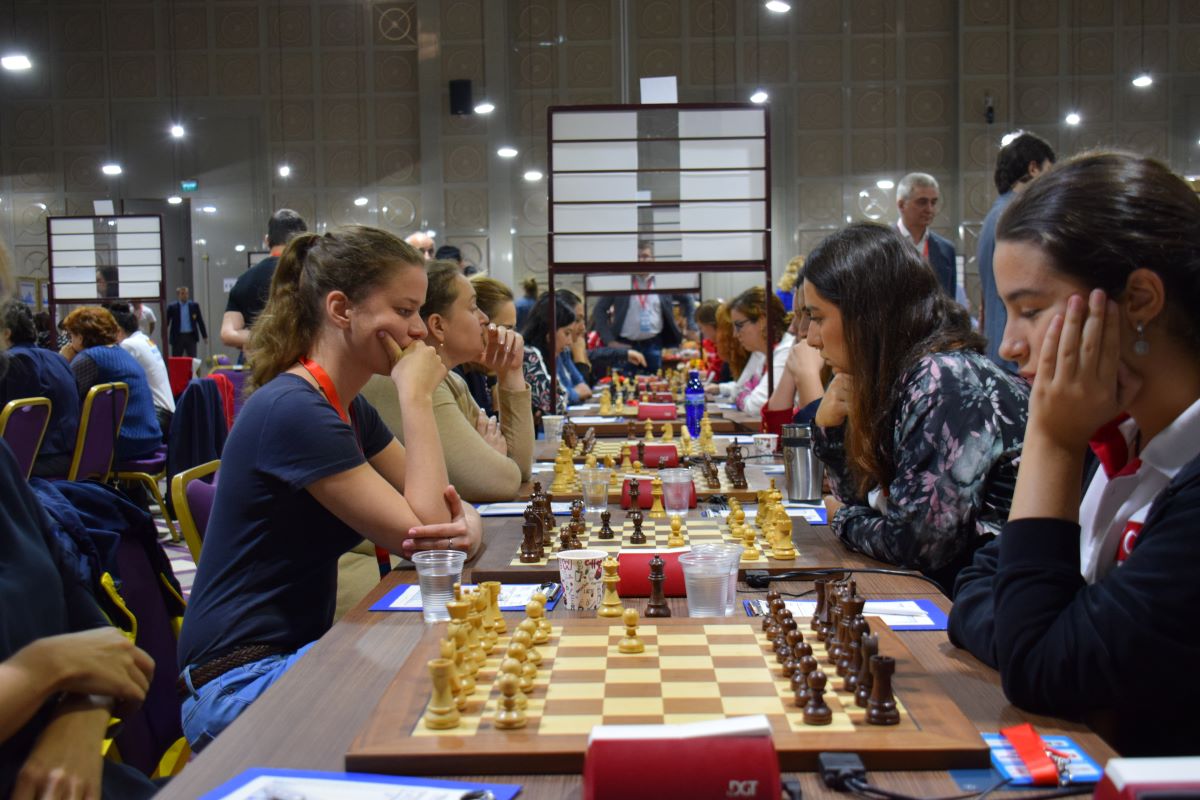 Ukraine, with 2015 Women's World Junior Champion Nataliya Buksa on board 3, beat Turkey in Round 4, but a loss to Serbia in Round 5 means the 3rd seeds are 4 points behind Russia in 10th place | photo: official website

In Round 6 Azerbaijan will get a chance to stop Russia in the women’s section, while Russia-Ukraine could produce the first sole leader of the tournament in the open section. You can follow all the action here on chess24! Open | Women