Ian Nepomniachtchi swept Viktor Laznicka aside in 26 moves as Russia won another match by a single game to take the sole lead in the 2017 European Team Championship. Seven teams trail by a point, including Armenia, Hungary, Croatia and Armenia, while big games included Radek Wojtaszek beating Mickey Adams and David Anton shooting down high-flying Shakhriyar Mamedyarov. In the women’s section a Valentina Gunina win over Anna Ushenina gave Russia victory in the big match of the day against Ukraine. 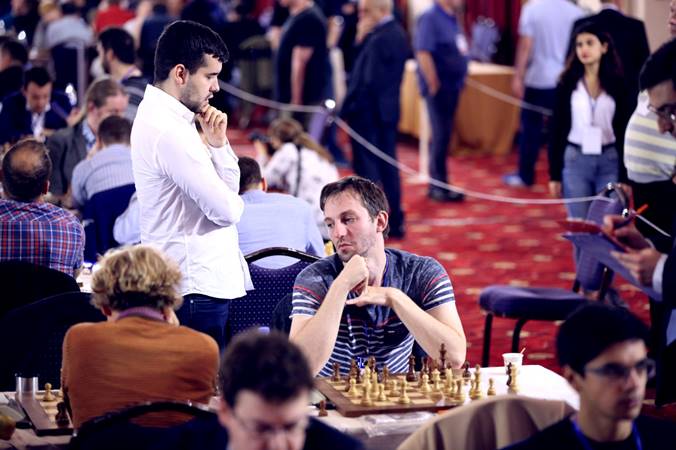 You can replay all the games from Round 3 using the selector below – simply click a result to open the game with computer analysis, or hover over a player’s name to see all his or her results so far:

Once again the Russian men’s team was the horse that only jumped as high as it needed, with Ian Nepomniachtchi playing the kind of game that earns him his place on the national team. 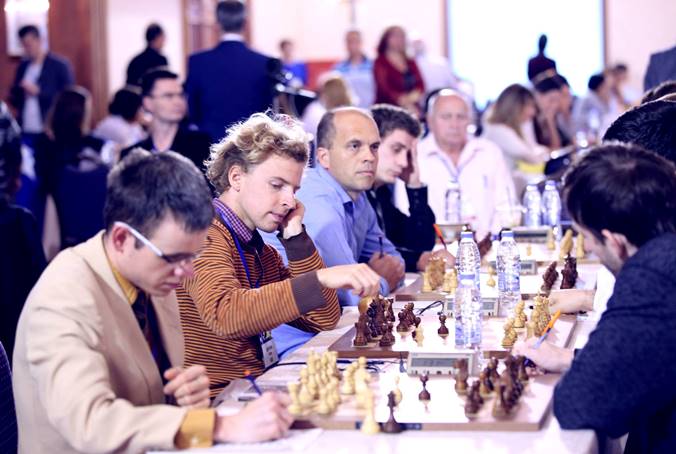 Up until move 15 of a Caro-Kann Czech no. 1 David Navara must have been taking an interest in the game, since he’d played the same line against Fabiano Caruana at the Baku Olympiad. Caruana played 16.Nxc3 and allowed Navara to castle a few moves later, though, while Nepo blitzed out the venomous 16.Qc2:

No doubt there was an antidote, but Viktor Laznicka didn’t find it and was already in big trouble before 23.e6!? (objectively 23.Nc5 may be better, but it wouldn’t have ended the game so quickly!)

Apart from the horrible pawn structure and the pieces all stuck on the back rank, White is threatening Nd6+ (then Nb5+ in many lines if the king runs), Nf6+, Qxh7+ and more.

The remaining games, with the exception of Navara-Grischuk, were tense, since Hracek had chances against Vitiugov while Matlakov was pressing against Plat, but in the end it was another 2.5:1.5 victory for Russia. 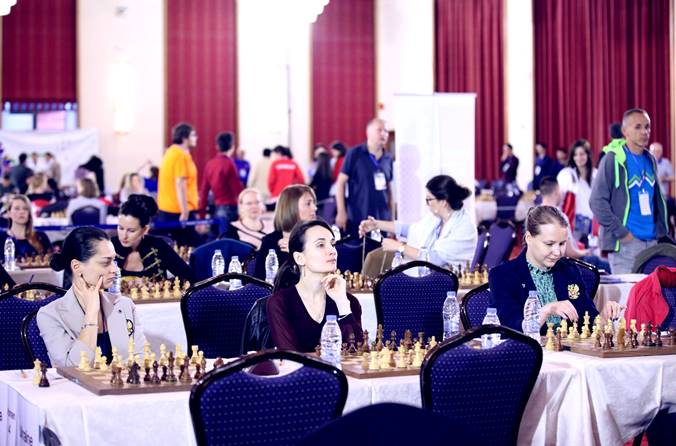 The Russian women, meanwhile, have also won all their matches 2.5:1.5, but Round 3 was the first time they copied the men rather than winning two games and losing one. Valentina Gunina was the hero after Anna Ushenina picked the wrong way to defend the c5-pawn (26…Rc7!): 26…Bd4? 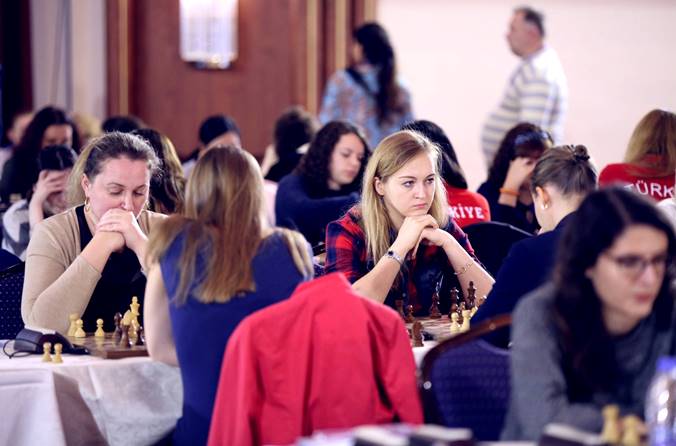 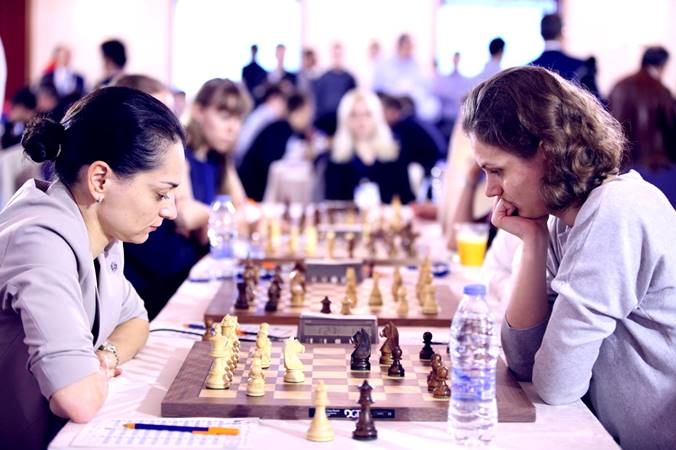 Anna Muzychuk had to play on against Alexandra Kosteniuk to try and level the match, but there was no way through | photo: Anastasia Karlovich, official website

In the women’s section Georgia, Poland and Spain are level with Russia on 6/6, with the Spanish team again crushing a team 3.5:0.5 (in this case Turkey) despite being outrated on three of the four boards.

Draws at the top 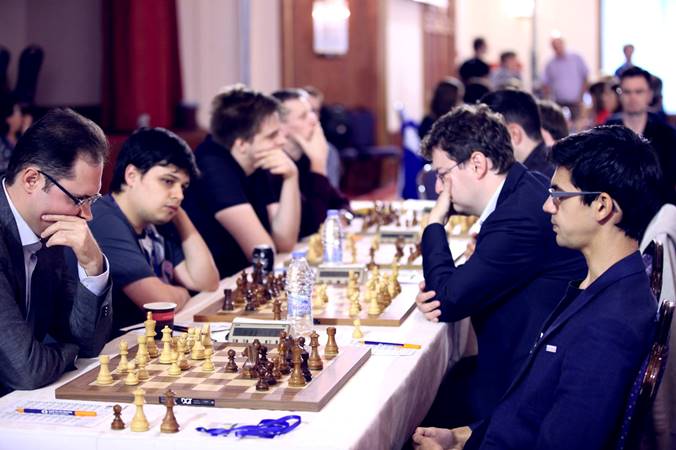 The perfect progress of a number of teams came to an end in the open section, with all eight games drawn in Hungary-Netherlands and Croatia-Armenia. The standout clash there was between Peter Leko and his heir, when it comes to a bad reputation for draws, Anish Giri. They played a sharp Sicilian, but it ended in 31 moves and not everyone was impressed:

Hungary looked to have excellent chances of joining Russia in the lead, but Benjamin Bok showed he’s not just about wild attacking chess as he managed to hold a tough ending against Richard Rapport. 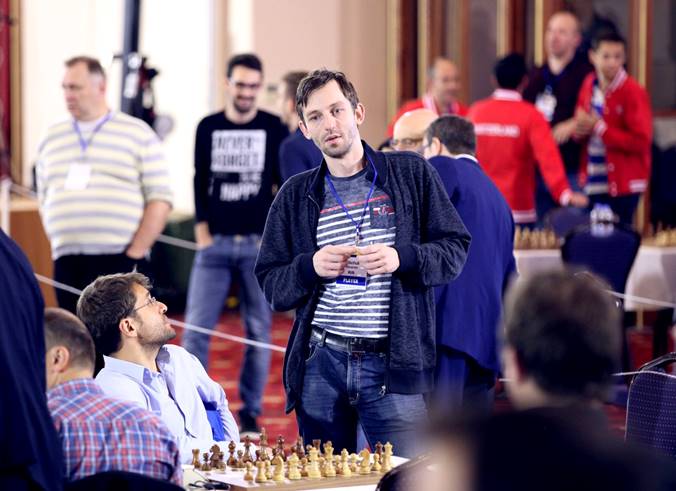 Levon Aronian was also held to a draw on top board | photo: Anastasia Karlovich, official website

The other big match to end in a 2:2 draw was very different, with Spain’s David Anton putting another nail in the coffin of Azerbaijan’s chances of gold by claiming the scalp of Shakhriyar Mamedyarov. What was impressive was not just the win, but the style in which it was done in, with Anton outplaying a player who entered the game as no. 3 on the live ratings with some Ruy Lopez manoeuvring. White built up a superior position and then converted it effortlessly:

Spain looked on course for a famous match victory, but Arkadij Naiditsch finally won a ropey position where he had two rooks against White’s queen – fittingly, he did it by trapping the queen with his rooks!

Medal hopefuls on the march

Elsewhere Germany joined the tie for 2nd place by ending the Italian dream with a crushing 3.5:0.5 victory after wins for Georg Meier, Matthias Bluebaum and Rasmus Svane. Israel were almost as convincing as they defeated France 3:1, with Boris Gelfand easing to a win over Romain Edouard and later talking to Fiona Steil-Antoni (he also went through the game in more detail in the live commentary with Jan Gustafsson):

Maxim Rodshtein played the game of the day, though, with the final stages of the massacre beginning here:

30…Rxe4! 31.dxe4 Ne3! 32.fxe3 fxg3! and the tripled white pawns on the e-file and helplessly cut-off king meant Nepomniachtchi-Laznicka had fierce competition for the most hopeless position of the day. 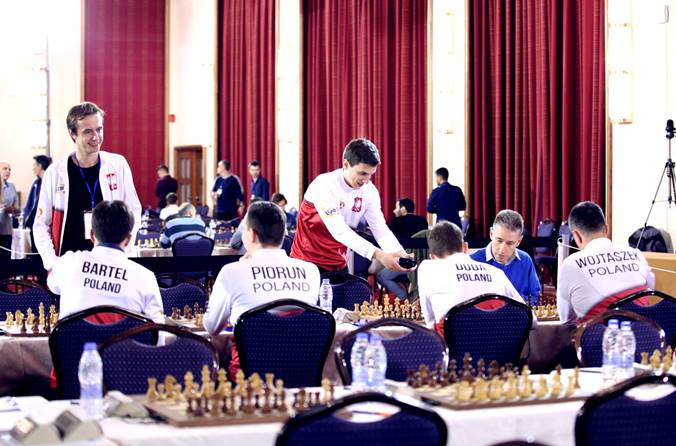 Poland are also on track for a fine tournament after overcoming 4th seeds England 2.5:1.5 with a single win on the top board. You would perhaps have put money before the game on Radek Wojtaszek and Mickey Adams, Baden-Baden teammates and super-solid players, reaching a draw. That remained the most likely outcome until the “too clever by half” 29…Nc7?:

If White grabs a pawn with 30.Nxb7 there’s 30…Ne6, when Adams would have to sac his queen to continue. He responded in kind, though, with 30.Qb4! and now White is grabbing a pawn! 30…Nb5 was met by the familiar trick 31.Nxa6!, and after queens were exchanged Wojtaszek won with remarkable ease. 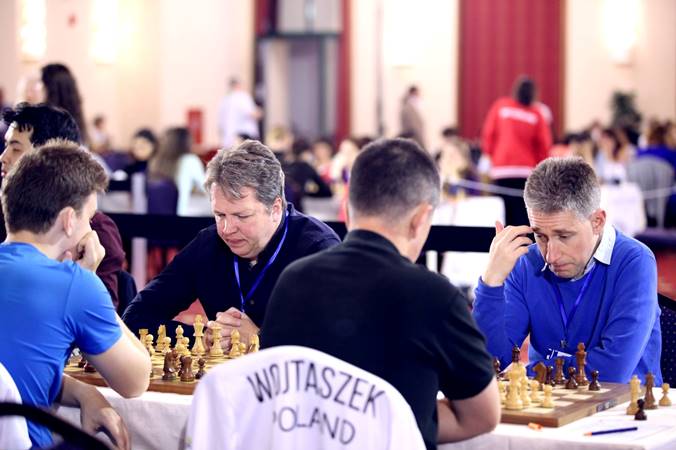 England’s best chance to hit back was Nigel Short on board 2, but his opponent, Jan-Krzysztof Duda, had the least bad of his three positions with Black so far in the tournament – i.e. he was merely on the edge of a lost position. In the end the 19-year-old was the one who could sing the song Nigel had referred to on Twitter when the game ended with bare kings:

In Round 4 we have games such as Grischuk-Leko, Vitiugov-Rapport, Nisipeanu-Wojtaszek and Aronian-Giri to look forward to in the open section, while Georgia-Russia is another potential tournament decider in the women’s section. 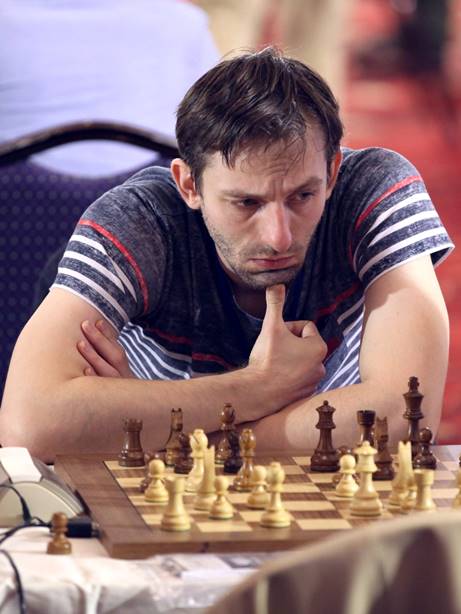 Since the 4th round will be played on Grischuk's 34th birthday let's have one last photo of Russia's no. 1 on Crete | photo: Anastasia Karlovich, official website

Jan Gustafsson and Fiona Steil-Antoni will again be commentating live from 14:00 CET, while you can watch every game with computer analysis here on chess24: Open | Women


You can also follow the games in our free mobile apps: