Anish Giri beat Pavel Eljanov as the Netherlands scored an upset win over 3rd seeds Ukraine in Round 2 of the European Team Championship. Top seeds Russia are one of the few top teams with a 100% match score, though the likes of Shakhriyar Mamedyarov, Mickey Adams and Radek Wojtaszek returned as the favourites who had suffered the day before scored comfortable wins. In the women’s section only Spain’s defeat of Romania defied expectations. 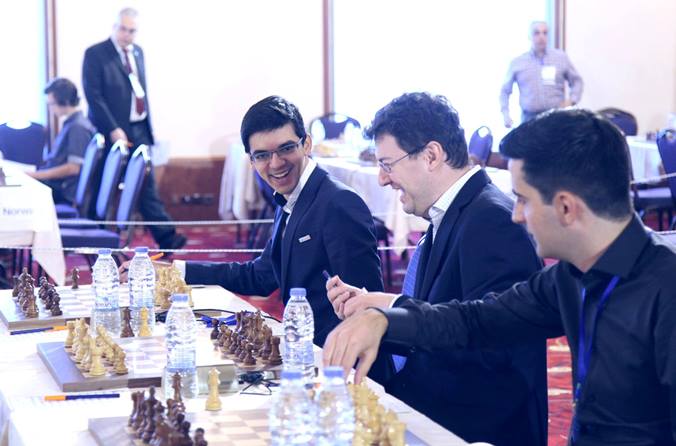 The key result of the day was a 2.5:1.5 victory for the Netherlands over Ukraine, after Anish Giri proved to be better prepared than Pavel Eljanov in a line of the Queen’s Gambit Accepted. He’d borrowed it from Fabiano Caruana, as we learned before…

…but he noted after the game:

Fabiano just wants to make his opponent’s life miserable while I’m trying to be creative!

Black was already on the ropes when Eljanov played 33…Qd7?, missing a little combination:

34.Rxe6! Rxe6 35.Qxf5! and the threat of Qh7 mate means White can capture twice on e6 with a trivially won position. Pavel only played on for another three moves before resigning.

That meant victory in the match, since the remaining three games were drawn:

Giri said he was “surprised and relieved” that Ukraine chose to drop Yuriy Kryvoruchko, a player he called “the Ukrainian Vitiugov” (i.e. a very strong but low profile player). The Netherlands had dropped Jorden van Foreest after his 139-move win the day before, but team captain Loek van Wely said it was nothing to do with his erratic chess:

I don’t care about his level of chess as long as he wins!

You can watch an entertaining post-mortem with Anish and Loek, where they also talk about the world rankings and the greatest Dutch players of all time, below:

[the video has been removed from YouTube, but we’ll add it again when it reappears]

Elsewhere Russia continued their “a good horse only jumps as high as it has to” (a German saying, according to Jan Gustafsson) approach, beating Belarus with a single win for Maxim Matlakov over Kirill Stupak. Armenia also looked set to continue their “win with White, draw with Black” approach, but after Aronian and Sargissian won their games Greece struck back with Hristos Banikas beating Sergei Movsesian, while Hrant Melkumyan needed all his skill in defending rook endgames to hold off Stelios Halkias. 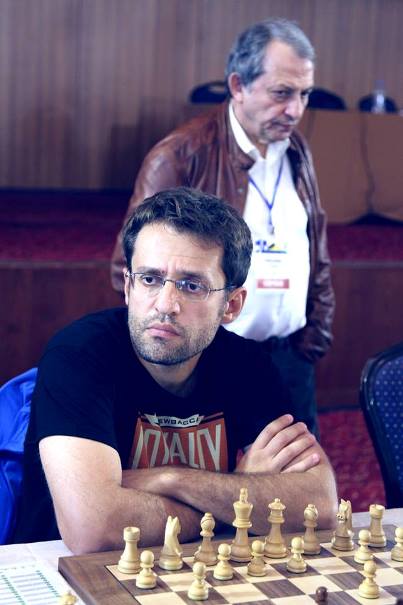 The only other top 10 seeded team to have won both of their matches so far is Hungary, who defeated Romania 3.5:0.5.

For the other top teams it was a case of recovering after draws or defeats the day before. Shakhriyar Mamedyarov was back as Azerbaijan crushed Austria 4:0, with his win over Markus Ragger taking him above Caruana into the world no. 3 spot and the 2800 club. Germany beat Slovakia 3.5:0.5, while there were 3:1 wins for Israel over Moldova and England over Norway.

England’s David Howell said afterwards, “I was hoping to play Tari to get revenge for the World Cup”. He couldn’t, since Aryan Tari played on top board against Mickey Adams, but instead he got the scalp of Jon Ludvig Hammer on board 2. For a while Howell’s usual time-trouble woes seemed an issue…

…but he noted at some point his opponent’s pawns were just dropping like flies. David got to do something rare so late in a game: 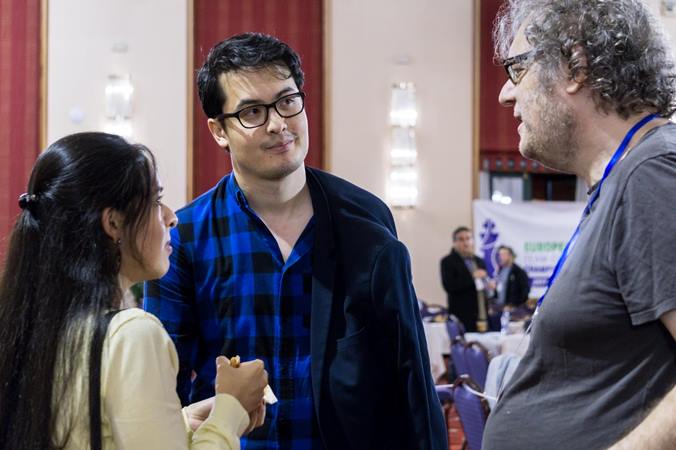 Gawain Jones also beat the hero of the day before, Johan-Sebastian Christiansen, on board 3.

England’s opponents in Round 3 are Poland, who also got a 3:1 victory after wins for Kacper Piorun and Jan-Krzysztof Duda against Greece 2:

Duda will play Black for a 3rd time in a row, and has had an “interesting” event so far. In Round 1 he was dead lost against Lubomir Ftacnik and drew, while in Round 2 he seemed to forget an essential opening nuance against Nikolas Theodorou (9…h4! and not 9…b5?! immediately) and was again close to lost. The picture only changed dramatically after 15…axb5:

The computer still likes White after 16.Ndxb5, but instead Theodorou went for a brilliancy prize with 16.Nf5+??! It wasn’t hard to imagine that might work, but if there was a path to salvation his ferociously talented 19-year-old opponent was likely to find it… and there was! 16…exf5 17.Rhe1 Kd8! 18.Qf7 Ne7! and since Black was two pieces up if he wasn’t getting mated he was going to win. Eventually the game ended in an amusing final position, where the black king is all alone but there’s no killer blow and Black has an extra rook and bishop:

Two more matches deserve a mention. First Italy managed to score a second upset win in a row, beating Turkey 2.5:1.5 despite being outrated on every board. Sabino Brunello was a hero again, playing a positional king march to reach this position:

Mustafa Yilmaz played 43…Kf8, but after 44.Kxh7 e4 45.Ng6+! White had an easy win. 43…Kh8 would have put up more resistance, but Black will soon be in zugzwang when the e-pawn is stopped.

Georgia-Czech Republic, meanwhile, was always likely to be a close encounter and was ultimately won 2.5:1.5 by the Czechs after David Navara got to play the kind of crushing queenside attack with the black pieces you don’t get to see too often at this level. This is the final position: 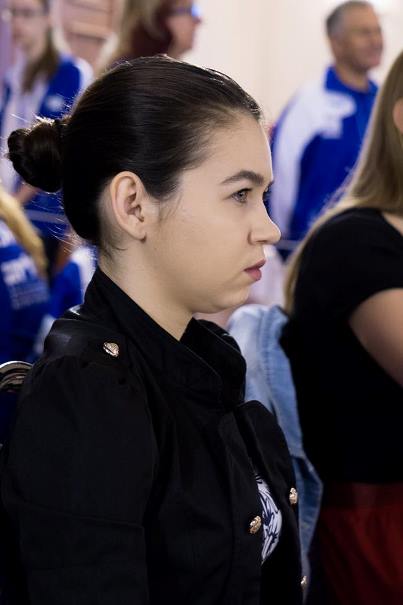 Aleksandra Goryachkina has had a tough time on Crete so far, drawing an overwhelmingly won position and then losing the next game | photo: Niki Riga, official website

In the women’s section, meanwhile, the favourites again almost all won, with Aleksandra Goryachkina suffering one of the few individual shocks despite Russia beating Czech Republic. She lost to 300 points lower-rated Kristyna Novosadova after a tactical blunder and has been rested for the big clash of Round 3 – Russia-Ukraine. 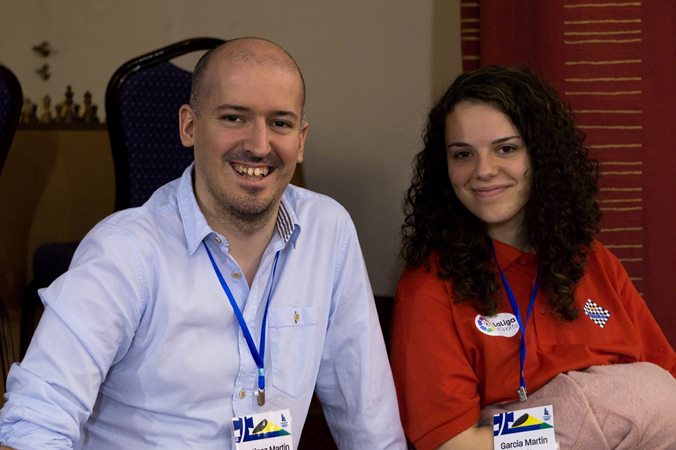 As well as Russia-Ukraine in the women's section...

Jan Gustafsson and Fiona Steil-Antoni will again be commentating live from 14:00 CET, while you can watch every game with computer analysis here on chess24: Open | Women