Magnus Carlsen and Vishy Anand both dropped 3.4 rating points, with Vishy falling out of the Top 10, as they were held to draws by lower-rated opposition on Day 1 of the European Club Cup in Mayrhofen, Austria. Their teams cruised to 5.5:0.5 wins, however, and despite scares for players such as Arjun Erigaisi the top teams all scored crushing wins. It was closer in the women’s event, where Elisabeth Paehtz gave top seeds Cercle d’Echecs de Monte-Carlo a narrow win. 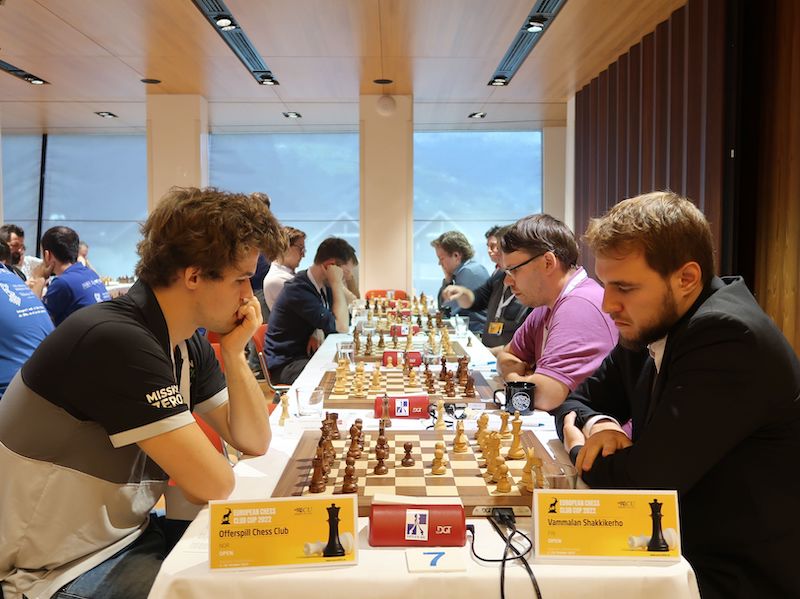 Day 1 of the European Club Cup was, as expected, a walkover for the top teams. However close individual games appeared, the lower-rated opponents eventually cracked as the clocks ticked down. In the top 9 matches no team won by less than 5.5:0.5. 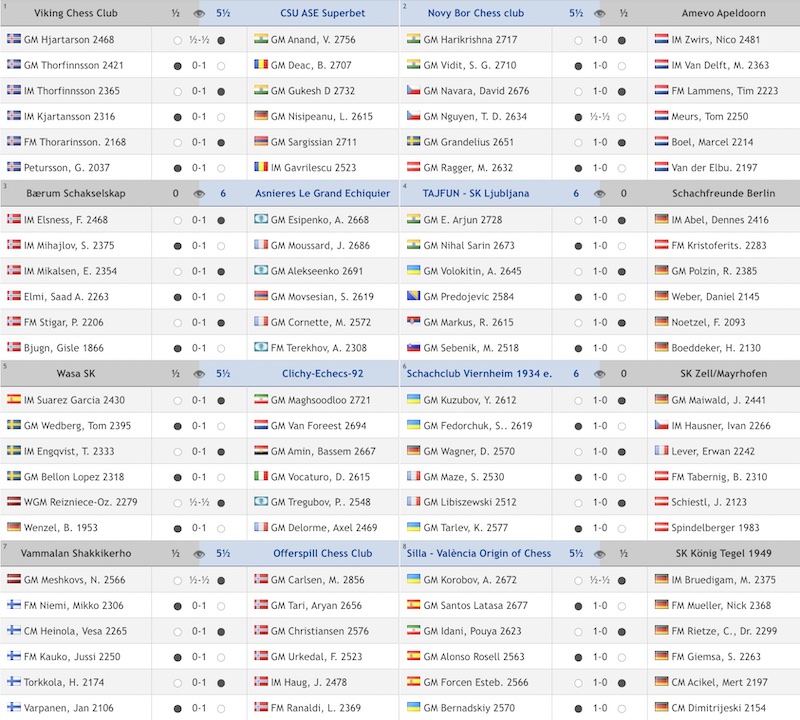 The surprise, perhaps, was that the biggest guns in the tournament, Magnus Carlsen and Vishy Anand, both played in Round 1. They also both had the black pieces against players they outrated by just under 300 points. 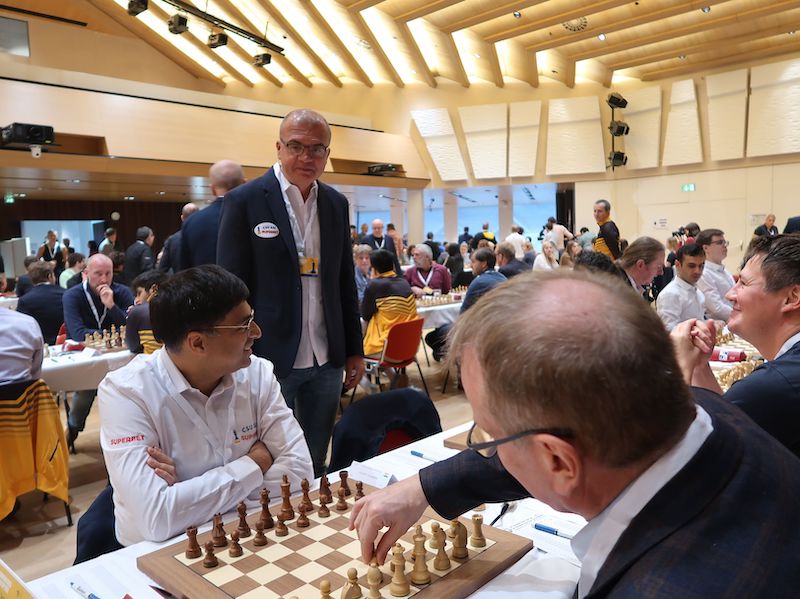 Vishy was the youngster in his clash with 59-year-old Icelandic GM Johann Hjartarson, an opponent it seems he played just once before, 16 years ago.

There was little to report, however, as a symmetrical English ended symmetrically after the minimum required number of moves to offer a draw — 30. Neutralising a team’s best player with the black pieces is seldom bad in a team event, though it did cost Vishy 3.4 rating points, and saw him drop from 9th to 11th on the live rating list.

If Vishy seemed fine with the draw, it was always clear Magnus Carlsen wouldn’t accept a draw lightly.

With control of the c-file and Nc7 coming anyway, 28-year-old Nikita Meshkovs was clearly better. Although Magnus held things together, and even took some calculated risks, he admitted defeat in his attempts to get anything against his opponent’s rock-solid setup.

A lot of people want to face Magnus at the very least one time, so I’m kind of in a situation where I’m not risking at all, because if I’m not losing then I should be super happy. If I try to fight against the World Champion then well, I tried my best. At some point before the game when I checked some lines and I thought, oh my goodness, this guy plays everything, it was hard to prepare, but obviously I’m super happy.

In fact the opening went perfectly:

I think I was a little bit lucky in terms of the line that Magnus chose. I checked this line not today, but let’s say during the last weeks, so at the very least I knew where to put my pieces and how should I react. I think it was good.

Perhaps the most intense game of the day came for Arjun Erigaisi against 33-year-old German IM Dennes Abel, which featured a razor-sharp theoretical line of the Caro-Kann.

Here 7…Qd6 and 7…fxe6 are by far the most common moves, while 7…Nf6 seemed to catch Arjun off-guard. It probably shouldn’t have done, since it was a move first played by Ding Liren and has been played six times by Vincent Keymer, according to the chess24 database. 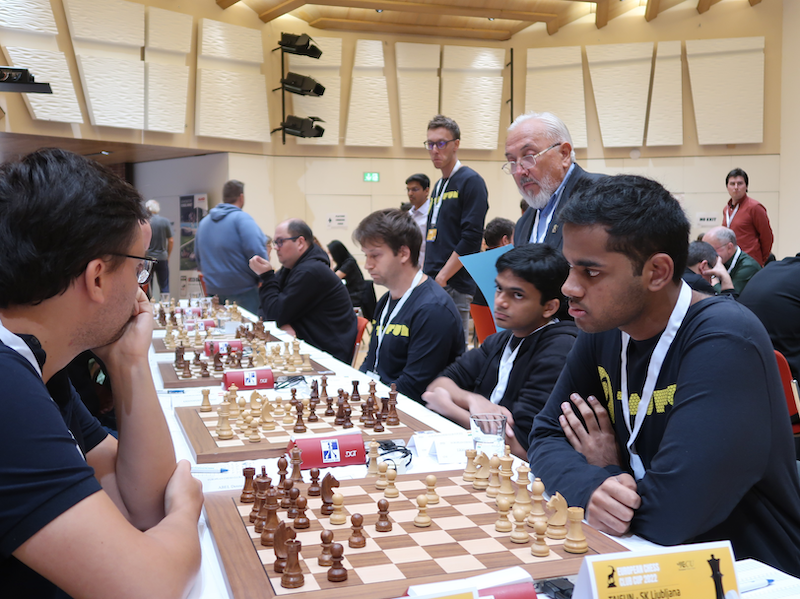 8.Bd3?! already seemed to give Black the advantage, and a few moves later White was seriously worse. At one point defeat looked on the cards for the 19-year-old Indian star.

While 21…Rxe2+! was powerful, however, it was far from obvious, since after 22.Nxe2 Ne3+ 23.Bxe3 Rxe3 Black remains a clear exchange down. The white king is too weak, however, with d4 and Qd5+ an important resource in some lines.

Instead after 21…Nde5?! 22.f6 White was alive, and despite some more turbulence it was no real surprise when Arjun finally got the better of his opponent.

That ensured Arjun, 18th on the live rating list (2733.5), kept just ahead of his 16-year-old compatriot Gukesh (2733), who ground out a win over Iceland’s Bjorn Thorfinnsson. Nihal Sarin, Harikrishna and Vidit also picked up wins on a good day for the Indian players.

There were no notable upset wins in the top matches, with 2634-rated GM Thai Dan Van Nguyen somehow managing to escape a dead-lost position against 2250-rated Tom Meurs. There were plenty of examples of tactical knockouts for stars, however, including French GM Jules Moussard finishing off Norwegian IM Sebastian Mihajlov as follows. 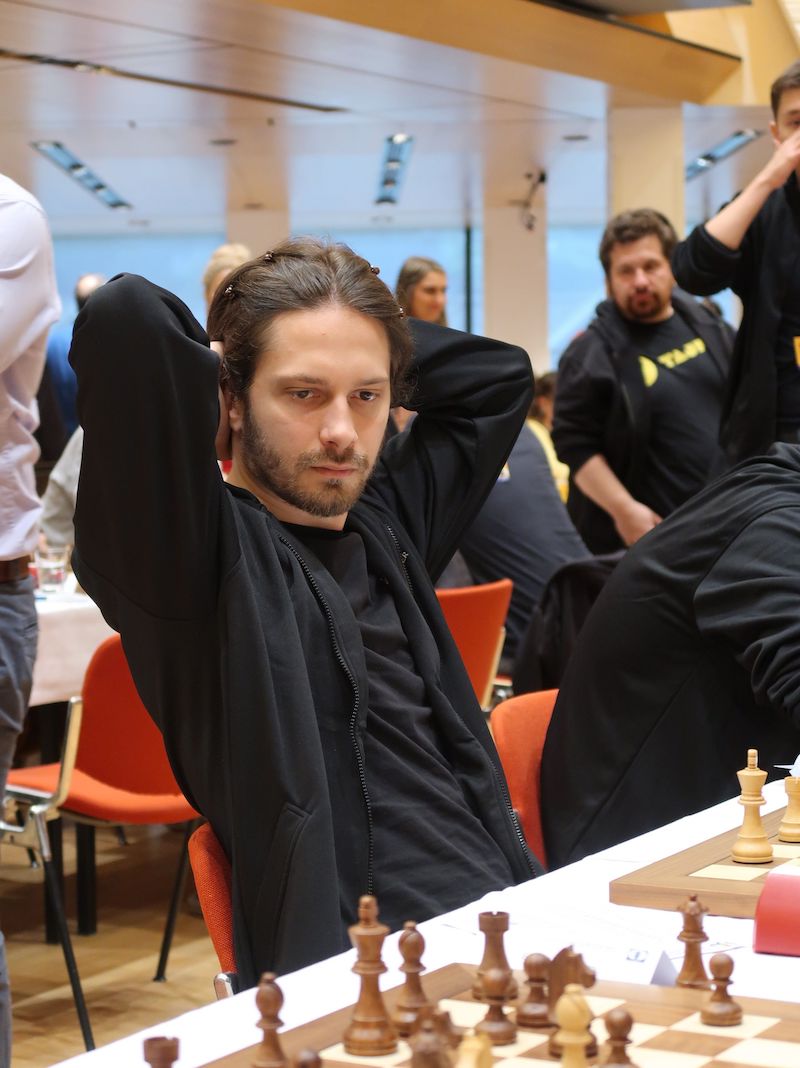 The Women’s section did see some upsets, including Ukrainian WIM Anastasiya Rakhmangulova beating Alina Kashlinskaya and Austrian WFM Nikola Mayrhuber defeating Nurgyul Salimova, but none that were enough to avoid the favourites winning their matches.

It was a curiosity of the first-round pairings that the two highest rated players were paired… but as they also happened to be sisters Anna and Mariya Muzychuk it didn’t take much to predict the lightning-fast draw that followed. 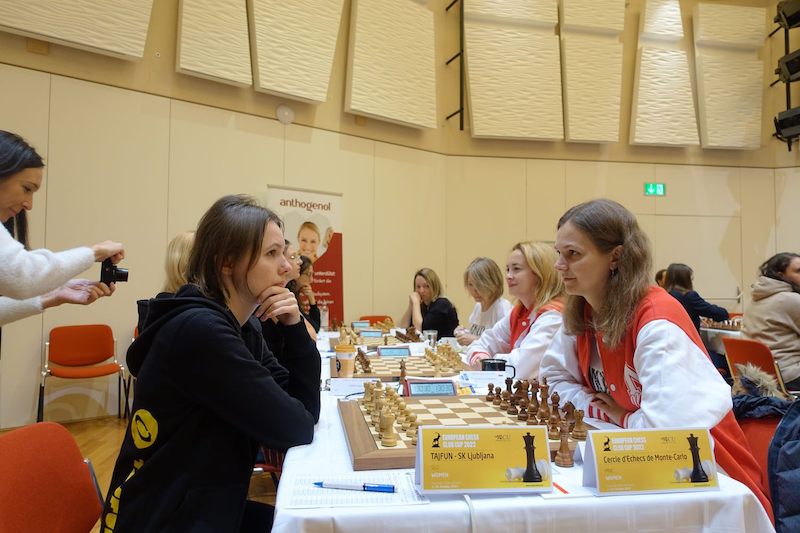 Mariya and Anna Muzychuk are the two highest-rated players in the Women's section | photo: ECC2022

The match was ultimately decided by the narrowest possible 2.5:1.5 margin, but it never felt that close. Elisabeth Paehtz blew Teja Vidic off the board with a kingside attack, while Pia Cramling, still performing at the very highest level at the age of 59, dominated but failed to finish off a totally won position against Zala Urh. 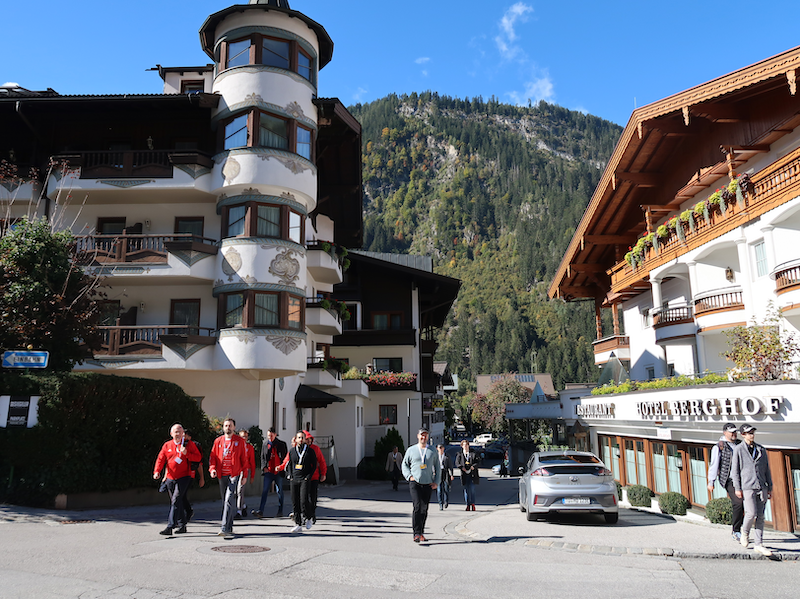 The tournament is taking place in the Austrian mountain town of Mayrhofen | photo: Fiona Steil-Antoni, ECC2022

In the Women’s event, with just 17 teams, we already have tough battles in Round 2, including Anna Muzychuk taking on Alina Kashlinskaya. With an odd number of teams, one of them sat out Round 1, Schachzentrum Seeblick e.V., which is a team with a difference — it features four sisters, two of them twins! They take on Mariya Muzychuk’s Tajfun.

In the Open section it’s getting tighter, but we can still expect more big wins for the favourites. Vishy Anand sits out, but Magnus is back, this time with the white pieces against 43-year-old German GM Alexander Naumann — a name that might have caused him to blink after the last few weeks.

The games start at 14:15 CEST (with a 15-minute anti-cheating delay), which is 8.15am ET and 17:45 IST. Follow all the action live with commentary from Peter Svidler, Laurent Fressinet and Lawrence Trent: Open | Women