Arkadij Naiditsch held Yuriy Kuzubov to a draw in Round 5 of the 2017 European Championship in Minsk, meaning no-one has a perfect score going into the only rest day on Sunday. Kuzubov is joined by Ivan Cheparinov, Hrant Melkumyan and Daniel Fridman on 4.5/5, although Maxim Rodshtein would have joined them if he hadn’t taken a draw in a won position in Round 5. Some of the top seeds are far adrift of the leaders, but with six rounds to go almost anything could happen! 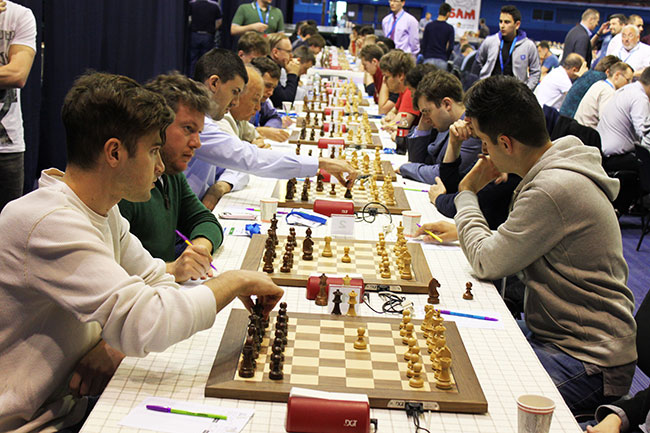 Maxim Matlakov, Arkadij Naiditsch, Benjamin Bok and co. at the start of Round 3 in Minsk | photo: official website

Nine 2700 players started the 2017 European Championship, and what’s happened to them so far is proof, if proof were needed, of how immensely strong the 400-player event is. Here they are in seeding order, with their current score and ranking: 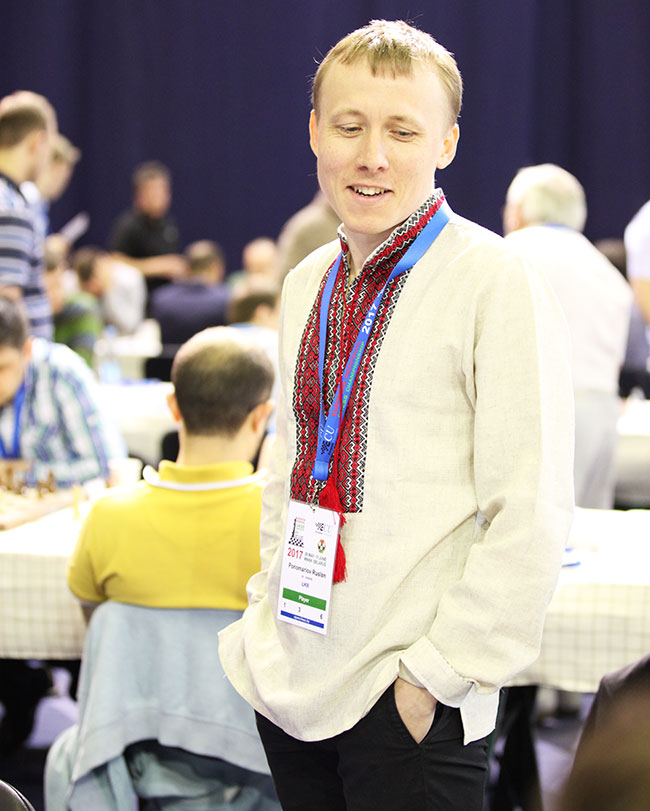 Ruslan Ponomariov has had a slow start so far as he bids to qualify for the World Cup later this year | photo: official website

As you can see, so far only Maxim Matlakov and Arkadij Naiditsch have managed to make their class tell, and they’re lurking in the big group just behind the leaders: 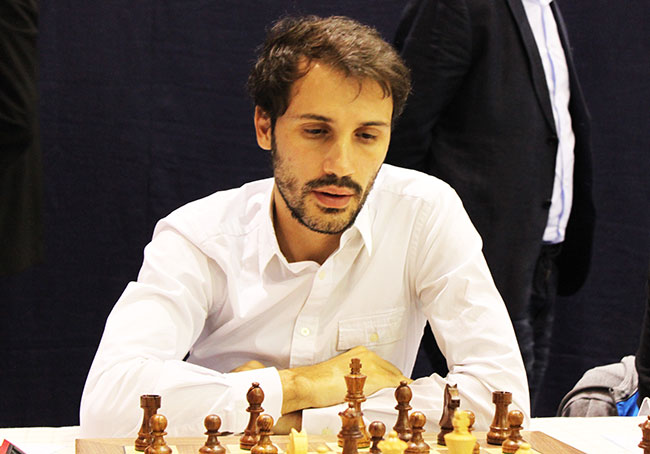 Ivan Cheparinov tops the table on tiebreaks - a curiosity is that he's playing under the European Chess Union flag, since the Bulgarian Chess Federation is currently suspended | photo: official website

With 100 games live each day even some very quick draws haven’t prevented us from witnessing countless blunders, brilliancies and upsets, though it should be noted that very few of the games have been completely mismatches. You can play through them all using the selector below – click on a result to open the game with computer analysis or hover over a player’s name to see all his or her results so far:

With so much action we’re just going to give a taster of the events so far in Minsk, with absolute no pretence of giving the full picture. One thing it’s fun to follow is some tactical motifs, such as rogue pawns! 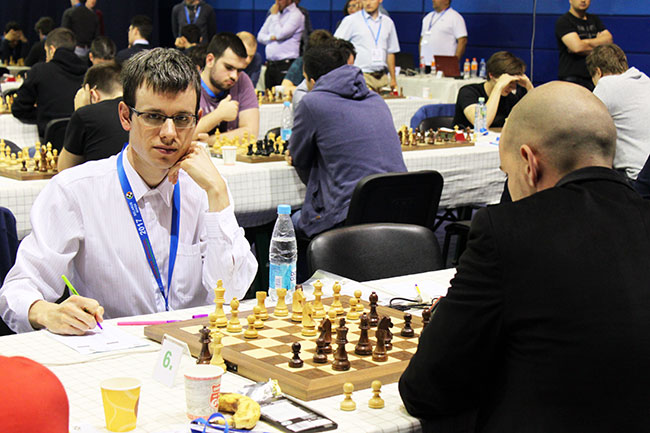 A pawn is more than a pawn

The biggest shock of the first round was Italy’s IM Pier Luigi Basso (2447) beating Ukrainian GM Anton Korobov (2688) in real style, with the star move made by a lowly pawn:

31.c6! and of course after 31…Rxb7 32.cxb7 the pawn would soon queen. Korobov stumbled on with 31…Nf6, eventually took the queen and then got to eliminate the pawn. Alas, there was no happy ending for Black:

37.Rd1! and the mating threat of Rd8-h8 will cost the queen. Black resigned.

A queen was given up for the sake of a pawn more forcefully in the following game. Elisabeth Paehtz has just played 14…Bb7 vs. Ivan Saric: 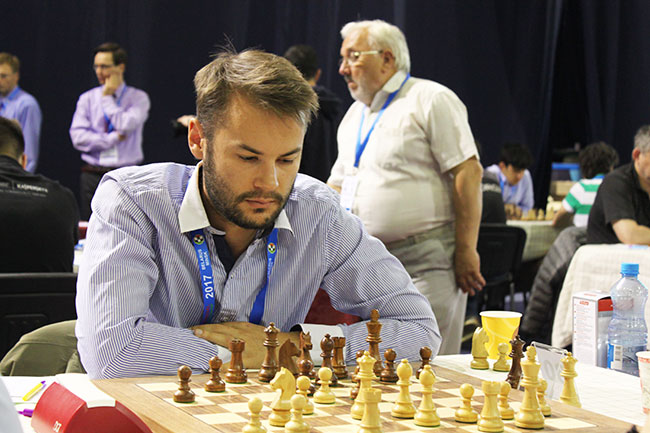 Ivan Saric suffered one shock lost but has won his remaining games for 4/5 | photo: official website

Arkadij Naiditsch just needed to finish off Stanislav Bogdanovich, and he did so in style:

59.Qd7! Black resigned. Of course taking the queen creates an unstoppable pawn, but what else? 59…Rc7 simply runs into 60.f7.

Sometimes it’s enough to sacrifice a rook to finish a game. Arkadij again, this time against local hero Andrey Zhigalko:

The other most successful top seed, Maxim Matlakov, also got in on the act in his game against Jaime Santos Latasa of Spain: 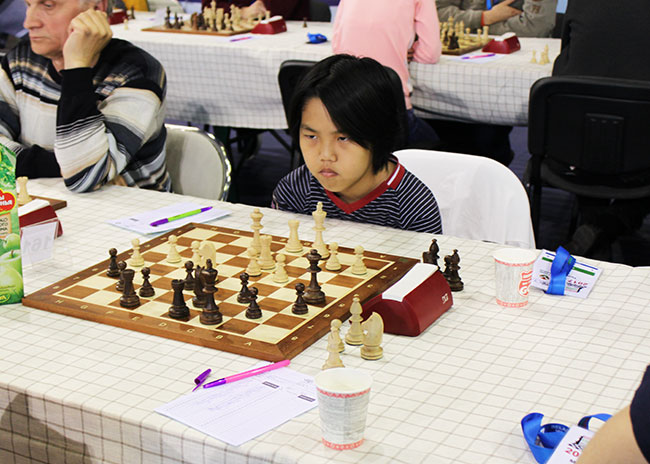 This kid has got "the stare" down to perfection | photo: official website

Maxim Matlakov has had an eventful ride on his way to 4/5. In the very first round he came up against an audacious attack from Slovakian IM Stefan Mazur:

24.Nh7?! was a very serious attempt to win the game fast, but after thinking for over 30 minutes Maxim found the antidote: 24…Kxh7! 25.Qh5 f5! and the young Russian went on to find all the right moves to survive White’s pressure and then convert the full point.

In Round 4 he was on the other side of the board as he unleashed a huge attack on Pavel Ponkratov. The black king returned to base at one point, but Ponkratov failed to rescue the game: 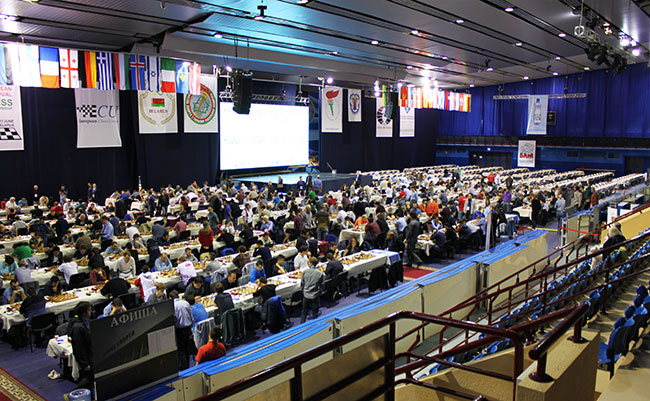 Other young talents have lived and died by the sword. Vladimir Fedoseev, interviewed here by Dorsa Derakhshani, rode his luck a little to reach 3/3, had to fight for a draw in Round 4 and then saw his aggression backfire against Daniel Fridman in Round 5. It was a shame, as the sacrifice he played was completely correct!

14.Bxf7+! Qxf7 (14…Kxf7 may have been better) 15.Qd6 Ne6. Vladimir continued 16.Qxe5 (the computer prefers 16.dxe5) and although the position was still close to equal queens were eventually exchanged and Black managed to disentangle himself and emerge a clear piece up.

In Round 3 Spain’s David Anton launched a spectacular attack on Sergei Azarov’s position:

26…Bxg2! and the bishop is immune due to a knight fork on h4. Black's minor pieces proved too much to handle and were delivering mate in the final position.

Anton didn’t let that discourage him, though, and is on 4/5 after a beautiful attack against Ukraine’s Olexandr Bortnyk in Round 5:

Dimitrios Mastrovasilis scored a crushing 22-move win over Andrei Volokitin, while perhaps the most memorable crush so far was Moldovian IM Vladimir Hamitevici crashing through against Russian GM Boris Savchenko. Black has already exposed the white king with a knight sac on f2 and now he can “sac” the queen:

The biggest name to suffer so far in Minsk has been Baadur Jobava, who lost a second game in a row when he let an advantage slip and then found the wrong way to defend against Russian IM Alexey Sarana’s threat of capturing on a4 – 30.Ra5??: 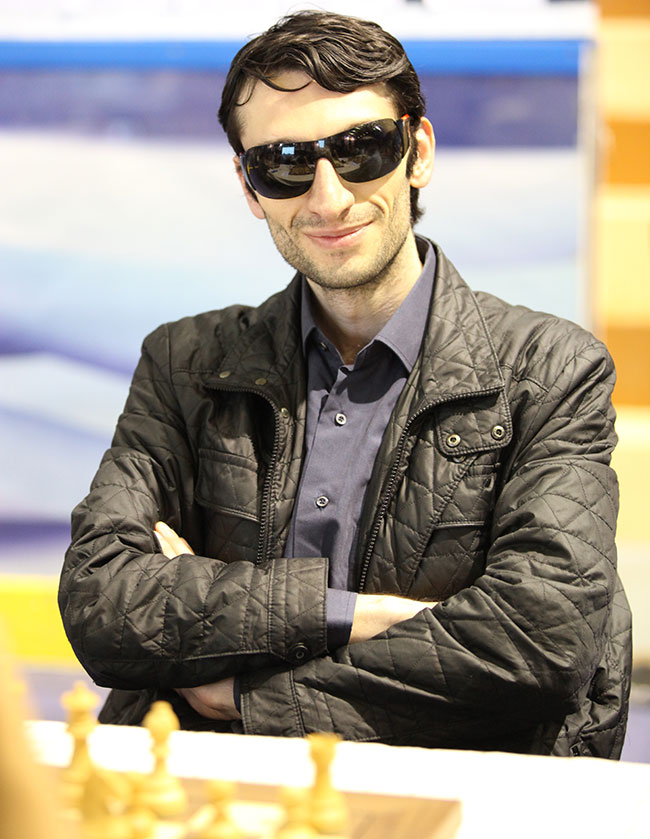 Baadur Jobava has not quite been a chess terminator in Minsk, but he's got the style... | photo: official website

The draw offer was his worst move of the game, since it seems White is winning here whatever Black does. 47…Kf6 runs into 48.R1h5!! (the other rook can also deliver that blow) and Black will have to give up the queen and get overwhelmed on the kingside. 47…Kg8 48.Qh6! is also lethal. After the only move 48…Qb2+ 49.Kg3 Qe5+ there’s no repetition as White has 50.Qf4! and Black can’t afford to exchange queens.

So the players had one rest day on Sunday, meaning they could spend a relaxing Saturday evening…

…before they get back to the long grind of the final six rounds that start on Monday. Of course another event starting on Monday is Altibox Norway Chess - it’s going to be a great couple of weeks and indeed month for chess fans!

Don't miss all European Championship the action from 14:30 CEST here on chess24. You can also follow the action for free in our mobile apps: