18-year-old Alireza Firouzja has overtaken Fabiano Caruana to become world no. 3 on the live rating list after winning brilliant games in Rounds 4 and 5 of the European Team Championship to climb to 2793.3. His team France has suffered with two losses, but no team is setting the Open event on fire, with a six-way tie for 1st place on 8/10 points. In the Women’s section Russia are cruising with a perfect 10/10 after defeating their biggest rivals Georgia. 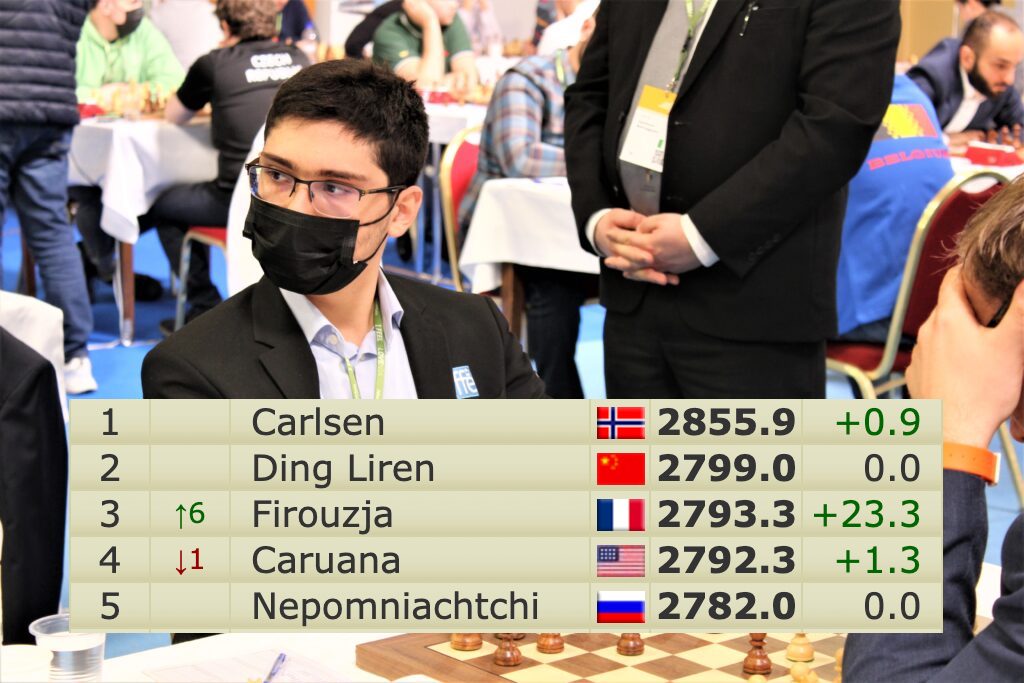 One man is dominating the European Team Championship. Alireza Firouzja has continued where he left off in the Grand Swiss by cutting through strong 2600+ opposition, regardless of whether he has the white or black pieces.

His stats were simply incredible.

We haven’t seen such a rise to the very top since Magnus Carlsen crossed 2800 himself as an 18-year-old, with both Carlsen and Vladimir Kramnik officially becoming world no. 1 at the age of 19. Alireza, whose progress may have been slowed by the pandemic, is a young man in a hurry, and he scored another fantastic win (his chess24 username is FantasticStar) in Round 5.

His opponent was Armenia’s Gabriel Sargissian, who was on a perfect 3/3 score, but the game went like a dream for Alireza.

1.d4 prevented the Caro-Kann Firouzja had used to win his last two games with the black pieces, but after 1…d5 2.c4 Alireza got to play 2…c6 anyway. In fact he blitzed out all his moves until move 18, when he had a 45-minute lead on the clock over his opponent. White’s position was precarious, and on move 28 Gabriel slipped.

The doubled pawn on g6 wasn’t much of a prize, and although Gabriel tried to escape into a potentially holdable ending it was one that Firouzja made to look like a forced win for Black. You think of Tony Miles’ description of Garry Kasparov as a “monster with a thousand eyes” as Alireza effortlessly sealed victory.

In the final position the black pawn on a7 has to be dealt with by the white king, while the knight will go after White’s kingside pawns. They can run, but they can’t hide, and if you play through the position against the computer it turns out to be a very easy win for Black.

That result means that Alireza Firouzja now has the 18th highest live rating ever and has overtaken Fabiano Caruana on the live rating list to rise to world no. 3.

The number 2 spot and 2800 are both well within reach with four rounds of the European Team Championship to go, while the scenario that the winner of Carlsen-Nepomniachtchi might face Firouzja in the next World Championship match grows ever more likely. Of course winning a Candidates Tournament is a hugely difficult task for anyone, but if any junior player is currently fated to become World Champion it looks like Alireza.

Alireza’s team France have been less impressive, however, losing that match to Armenia due to losses on the bottom two boards. The good news for the 3rd seeds, however, is that no-one is blowing away the competition. Favourites Russia overcame Poland in Round 4, when Radek Wojtaszek crumbled under Daniil Dubov’s pressure.

In Round 5 Russia drew on all boards against 2nd seeds Azerbaijan, to make it three match wins and two match draws, the same result as Azerbaijan, Ukraine, Hungary, Armenia and the Netherlands.

It's been a bumpy ride for the Netherlands, but they're in the co-lead going into the rest day | photo: official website

After starting with 3/3 for the Netherlands Anish Giri slowed down in Round 4, with a 15-move draw by repetition.

Anish was referring to his new 1.e4 Chessable course, but then he "mixed up his preparation" and started 1.d4 himself in Round 5 before missing some chances on the way to a 52-move draw against Aleksandar Indjic. It didn’t harm the Netherlands’ hopes, however, since Jorden van Foreest helped them to match wins in both Rounds 4 and 5.

In Round 4 it was a study-like ending, where he was initially winning with a rook against three pawns, but gave Slovenia’s Jure Borisek some chances.

49…g4! is the only move for Black to draw, but it was missed here, and a couple of moves later, and Jorden went on to win, before then winning a nice attacking game against Serbia’s Ivan Ivanisevic in Round 5.

A curiosity is that his lower-rated brother Lucas is playing on a higher board. There was one dramatic moment in his game against Velimir Ivic, where Lucas' 31…Qe6? was a mistake.

The last surviving player on a perfect score at the event is 22-year-old Benjamin Gledura, whose wins in Rounds 4 and 5 saw Hungary rescue draws against Azerbaijan and then Spain.

Spain have been boosted by the resurgence of 49-year-old Alexei Shirov, who qualified for the Grand Prix from the Grand Swiss and won a spectacular game against Viktor Erdos in Round 5.

21.Nd5!! Qxc4 22.Nxf6+ gxf6 23.Qh5! was a strong piece sacrifice, and although Viktor had chances to defend, the white pawns eventually overwhelmed the black king.

David Anton has also been in excellent form, with the Spanish leaders climbing towards 2700 in unison.

And Norway continue to outperform their seeding, though they’ve sometimes got a helping hand.

Meanwhile in the European Women’s Team Championship everything is much clearer, with Russia having scored a perfect five wins, including a 3:1 defeat of 2nd seeds Georgia in Round 4. Olga Zimina’s win over Valentina Gunina (previously on 3/3) was the first individual loss for Russia, but wins for Katerna Lagno and Polina Shuvalova meant they overcame Italy anyway.

18th seeds Greece are the surprise of the event so far, sharing 2nd place with Georgia after Anastasia Avramidou’s win over Pauline Guichard gave them victory over France in Round 5.

Wednesday is a rest day, before battle resumes on Thursday, when Alireza is likely to face 2619-rated Dimitrios Mastrovasilis of Greece. Tune into all the action live here on chess24 from 15:00 CET: Open | Women