Eljanov triumphs in Shamkir B

Ukrainian Grandmaster Pavel Eljanov has pulled off an impressive triumph in the Gashimov Memorial B Tournament, finishing half a point clear of reigning European Champion Alexander Motylev and a full point ahead of 2700 GMs Wang Hao and Etienne Bacrot. 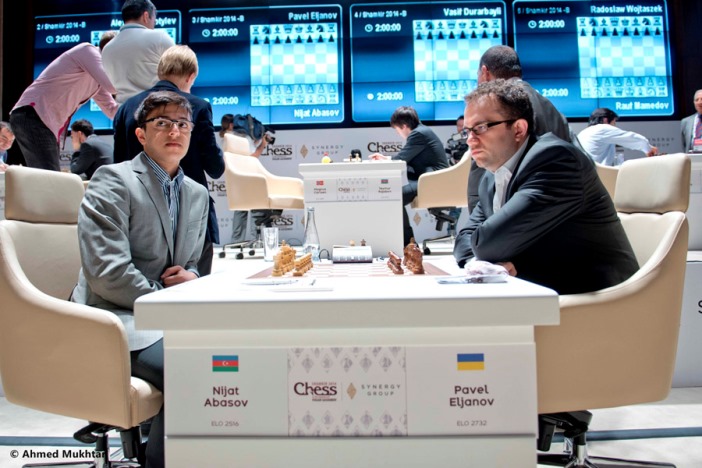 Eljanov eased to victory by drawing with Nijat Abasov in the final round | photo: Ahmed Mukhtar, official website

The key to Eljanov’s victory was a fine end to the tournament, as after losing in the 6th round to China’s Wang Hao he managed to finish with 2.5/3, including a magnificent game with Black against the then leader, Etienne Bacrot. The Frenchman, in contrast, had a disastrous end to the tournament, scoring only a single point in four rounds.

10... ♘d7! Bravo! Previously Black would give up the centre with dxe4 or the queen would return to its starting position to defend d5. Eljanov ignores the threat with a positional pawn sacrifice.

12... c5! Eljanov's idea is that in exchange for the d5-pawn the black pieces will get a host of good squares. When the d4-pawn disappears the g7-bishop threatens to become very important, so in the following moves Bacrot seeks to eliminate all its possible targets.

13. ♘e4 ♕b6 14. dxc5 ♘xc5 15. ♘xc5 ♕xc5 16. ♖c1 ♕b4 17. b3 The position is very instructive because White is apparently a healthy pawn up and has no problems on the long diagonal nor any obvious weaknesses... but he's not better. Why not? Because he has no plans to improve.

Consider his pieces - what squares can he find for his knight? Not so many... The g7-bishop takes away the two central squares and if you want to play c4 it can be met by b5. It's not clear where the white bishop can go except for the plan that Bacrot implements by switching it to g2. The white rook on c1 is his best-placed piece as it can enter on the 7th rank, but to act on the 7th it needs some company.

The black pieces, meanwhile, have good squares and the ultimate target is the d5-pawn. If Black captures it he can fight for the advantage. As we'll see, however, Eljanov proves to be even more ambitious.

17... ♗f5⁉ What is Eljanov telling us with this move and especially with rejecting the more normal 17...Rd8? That he doesn't want to capture the pawn! As we'll see, he's not going to put pressure on it but instead place his pieces in active positions all around it, which will induce Bacrot to sacrifice the pawn himself in 11 moves just to try and get some activity. A really deep and very modern understanding of positional dynamics.

17... ♖d8 before playing Bf5 prevents Bd3 and is the most natural move. The d5-pawn would eventually fall and no doubt allow Bacrot to equalise with no trouble. But Eljanov wants more!

18. ♗d3 ♗d7 19. h3 Another revealing move. Bacrot has already realised that his position is difficult and intends to remove Black's active options.

21. ♗e2 a6 Once again not rushing at all. This move can serve both to support a future b5 but also to limit the white bishop even more, taking away the b5-square from which it could deprive the black rooks of the important e8-square.

25. ♖xc1 ♖d8 26. ♖d1 is the most normal move and the white position is solid enough to secure the draw.

25... ♖c8 26. ♕f4⁈ Permanently weakening his pawn structure without gaining any benefits except for exchanging queens.

28. ♘e5 , followed by Nc4-e4, would have held onto the pawn, and although Black would keep pressing at least White would have an extra pawn!

36. fxg6 fxg6 37. ♔g2 ♔f6 38. ♔f3 ♔f5 The ending, if defended perfectly in the hands of Karjakin, would be a draw, but it's a real nightmare to play. Bacrot tries to fix the structure on the queenside, or at least to exchange the pawns, which is advisable if possible, but not so convincing in this case.

41. b5 a5 fixes the pawns, but in reality the pawn on a4 is potentially very weak.

41. a5 b5 is hard to recommend given the b4-pawn will come under a permanent attack.

41... ♔e5 42. ♘c2 ♗c7⁈ White is in zugzwang as he can't move his knight as the king would enter via d4, so White has to opt for the move in the game, which allows Kd5. However, it was better to keep up the pressure on b4.

57. ♔c8 a5 A good game from Eljanov who maintained a very high standard, demonstrating good theoretical preparation, great understanding of dynamics, a will to win and finally good technique in the ending. With play like this winning tournaments is to be expected! 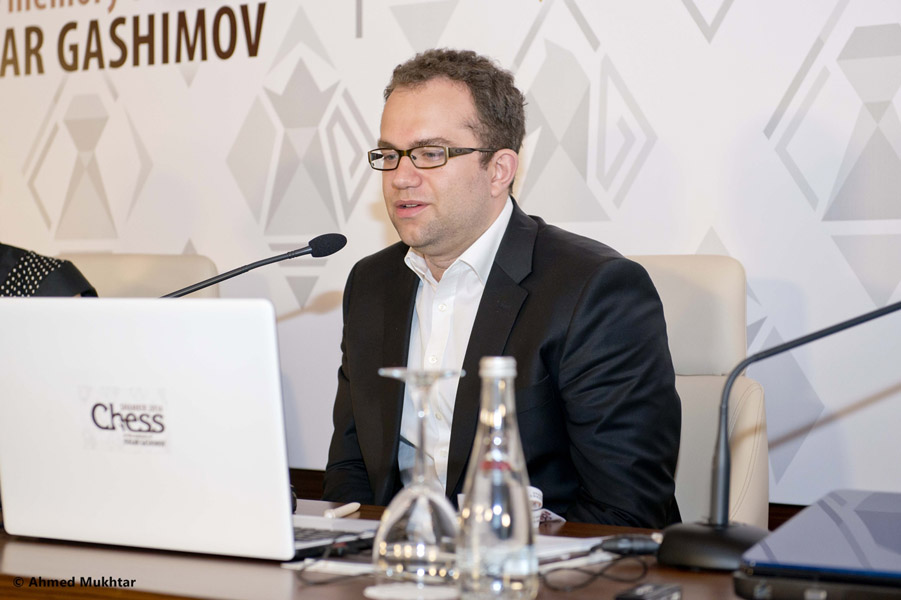 Although the table shows that the foreigners occupied the top five places you can’t count that as a failure for all the Azerbaijani players. A highlight was the performance of 18-year-old Nijat Abasov (2516), who despite being by far the lowest-rated participant lost only a single game, drawing all the rest!

Let’s hope the organisers will continue to hold such a strong accompanying event if the main super-tournament continues in the years to come.