Jan-Krzysztof Duda won a last-round thriller to end the Superbet Rapid & Blitz just half a point ahead of Levon Aronian and Vishy Anand. The Polish no. 1 said it had “special value” to win on his home turf, and was the most consistent player across both the rapid and blitz. Vishy faded in blitz but still almost tied for first after winning his last two games, while Fabiano Caruana (+10!) and Levon Aronian (an unbeaten +9) had amazing blitz performances, with Levon set to be the blitz no. 1 on the June FIDE rating list. 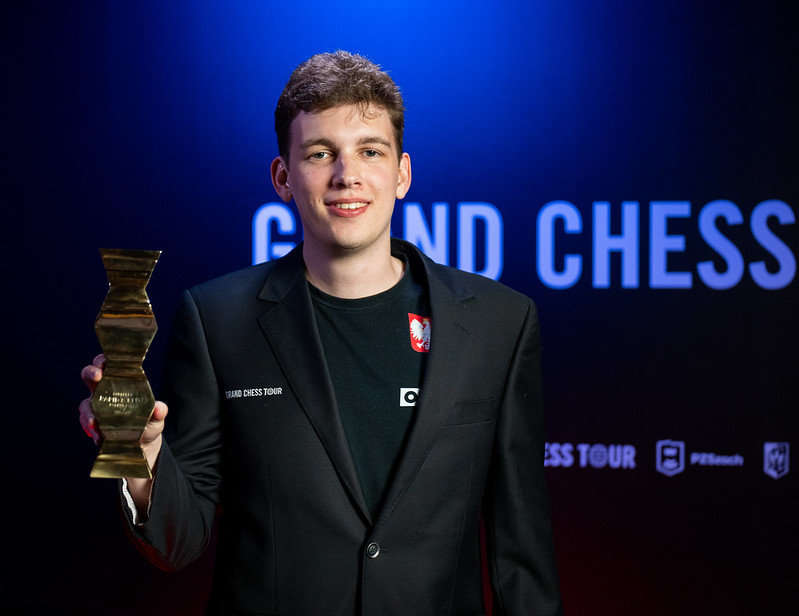 You can replay all the games from the Superbet Rapid & Blitz Poland using the selector below.

Jan-Krzysztof Duda started the blitz in Warsaw two points behind leader Vishy Anand, and losses to Vishy and Wesley So were a heavy blow to his chances. He hit back, however, and going into the final day was within 1.5 points of the leader. 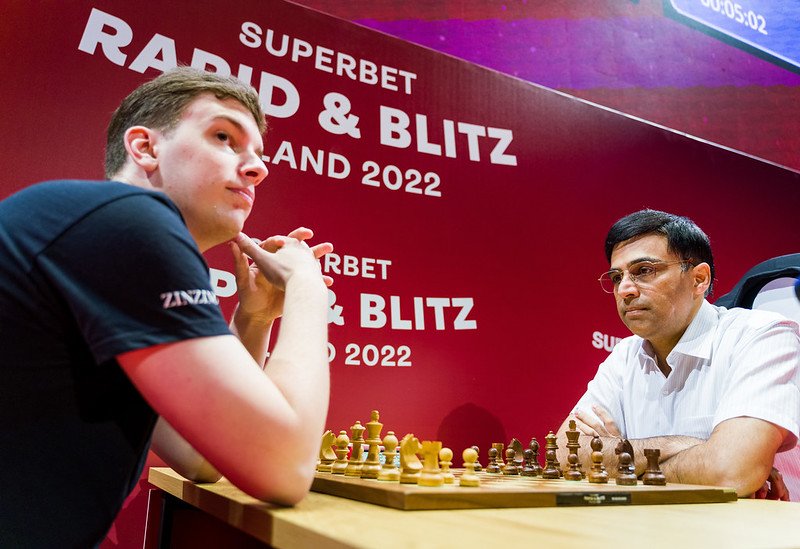 That made their rematch crucial, with Jan-Krzysztof commenting:

I was very focused against Vishy, I thought it’s very important to win against him, because he was the leader at the time, and also I hadn’t managed to beat him in this game in my life! So that was of course a very good start, also winning against Wesley was kind of unexpected, because I’d lost two games against him, and I managed now to win with Black.

When Vishy also lost the second game of the day Jan-Krzysztof had taken the sole lead, but what followed would be incredibly close. Going into the final round Duda and Aronian were co-leaders on 23 points, while Anand and Caruana had 22.5. 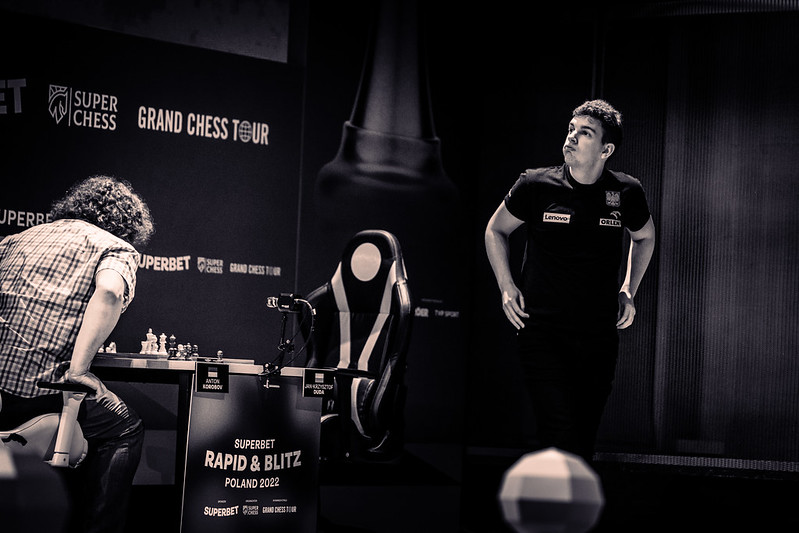 Vishy beat Radek Wojtaszek, while Aronian-Caruana ended in a draw, so that Vishy had caught Levon on 23.5 points. Levon had in fact missed a good chance to win that game, but if he was going to look at missed opportunities it would be hard to look further than the previous game against Anton Korobov. The Ukrainian genius had blundered on move 7 and gone full kamikaze with 8.Nxf7?!

Remarkably, however, Anton ultimately managed to whip up enough complications to force a draw.

Getting back to the final round, however, it meant that if Duda drew his game against Kirill Shevchenko we’d have a 3-way tie for 1st, while if he won he’d take the top prize outright. At the time, however, Duda was losing! He said afterwards:

The last game was kind of funny. Probably I blundered Rxg7 at some point. It was a very nervous game, of course, but it was fun, and I’m very satisfied with my play overall. 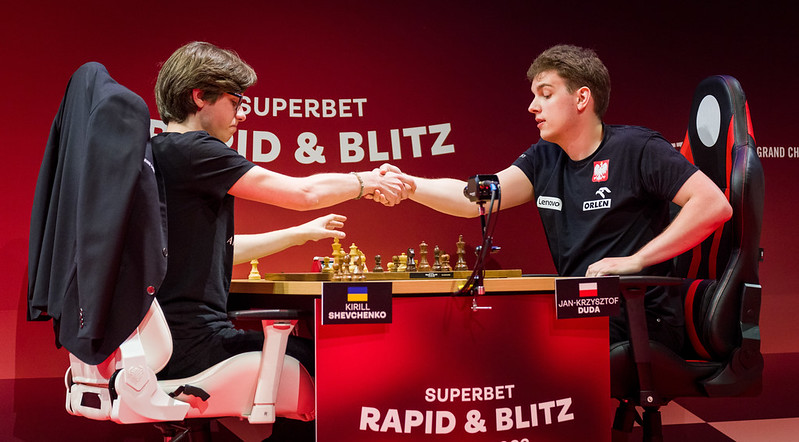 Duda was right about Rxg7.

Kirill must have been looking at things like that in the minute he spent before opting for 29.Kh2?!, and Duda’s luck would also hold a little later when 36.Rxg7+! would have been an even clearer kill. When Jan-Krzysztof later took over, however, his play was fast, brilliant and played with a real swagger.

44…Rc1! 45.Qf3 Re1 46.Nd3 Re4! isn’t the kind of manoeuvre you often see on a board full of pieces, but the rook on e4 perfectly supported the advance of Black’s kingside pawns as Duda crashed through.

Duda had repeated his success in Warsaw during the 2021 World Rapid and Blitz, where he was the most consistent player, finishing 5th in the rapid (just half a point behind the leaders) and runner-up in the blitz, after losing a playoff against Maxime Vachier-Lagrave. This time he got to take the trophy and the top prize of $40,000. 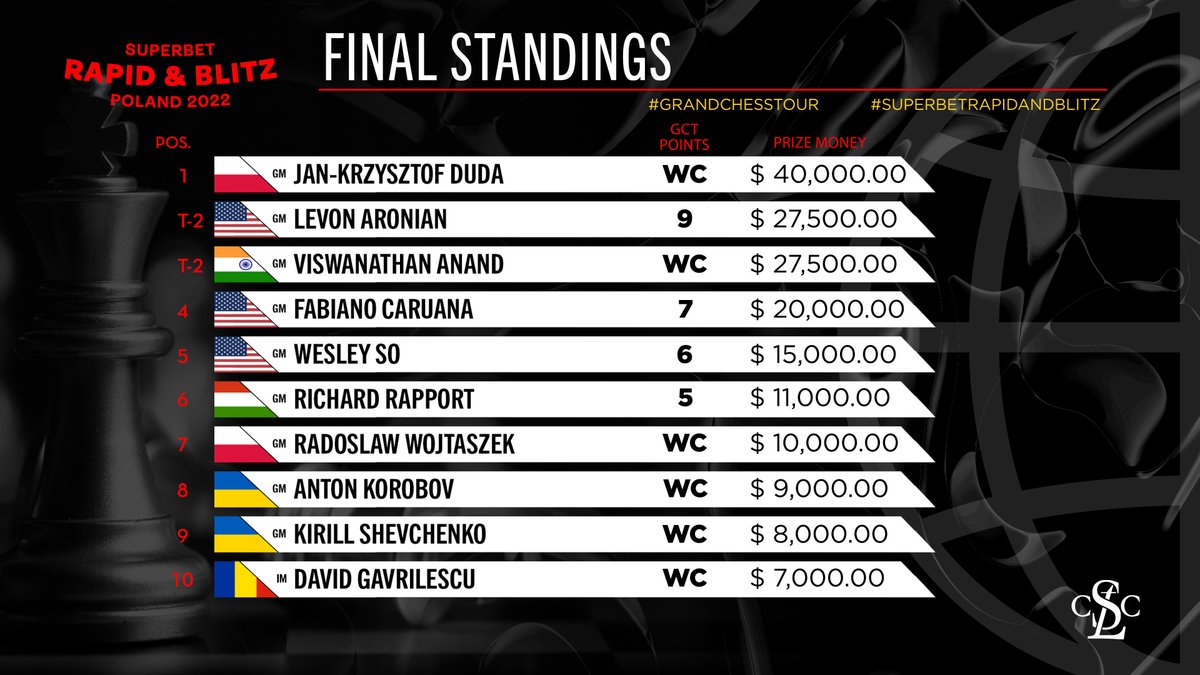 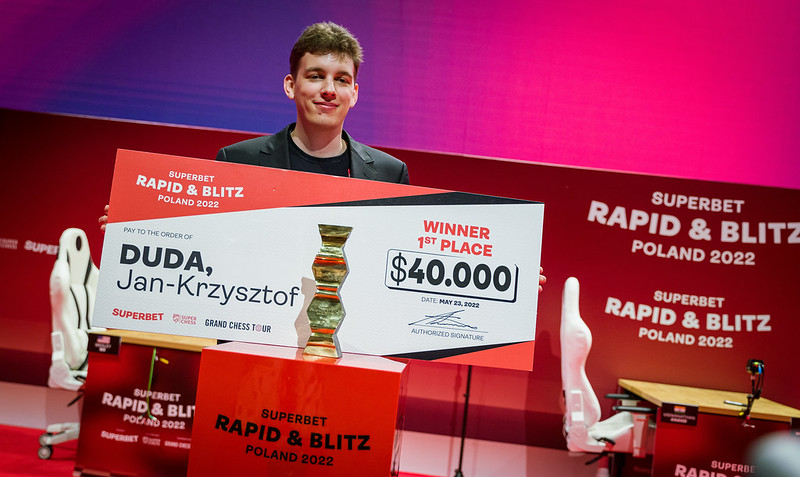 Vishy Anand’s stunning performance in the rapid chess was almost enough to make up for a somewhat lacklustre blitz event (like Wesley So he scored +1), but in any case the tournament had been a triumph for the 52-year-old legend. 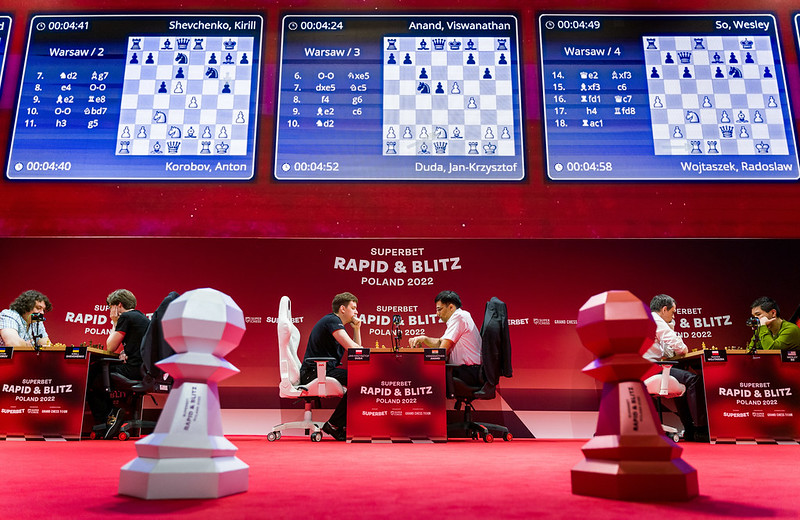 It was great to see Vishy back on the big stage | photo: Lennart Ootes, Grand Chess Tour

Meanwhile the fact that Fabiano Caruana went into the blitz five points behind Vishy, while Levon Aronian was four points behind, tells you just how impressively they played in blitz. Neither lost a blitz mini-match…

…with Fabiano at one point putting together a 7.5/8 streak. He scored an incredible +10 (14/18), but it could have been even more if he’d reacted correctly in this outlandish position against Kirill Shevchenko.

The computer gives White (Fabi) an over +6 advantage and recommends 40.Ra7!, though other moves that don’t change the position radically also keep an edge. In some lines Black sacrifices his bishop on c5, but after 40.dxe5? Black could simply take with 40…Bxc5 and any advantage had gone. Kirill went on to win. 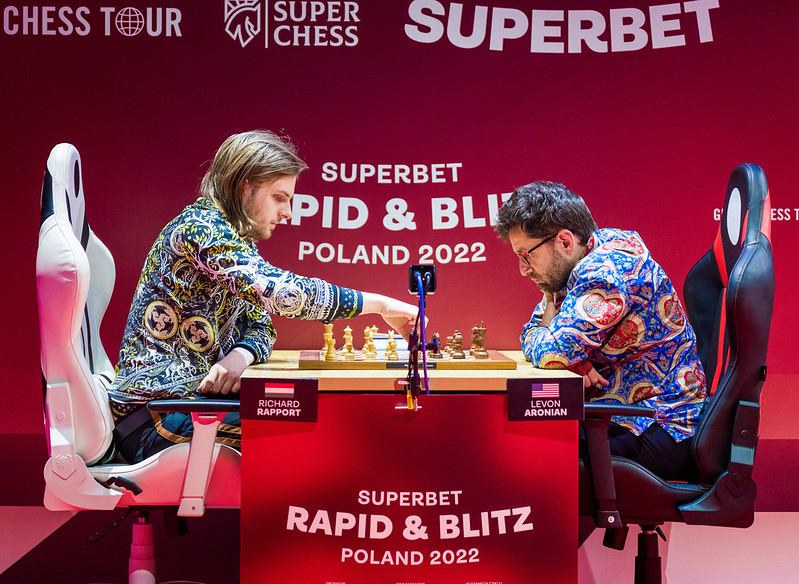 Levon scored “only” +9 (13.5/18), but could boast of going unbeaten through 18 rounds of blitz, and he has the ultimate bragging rights on the blitz rating list. 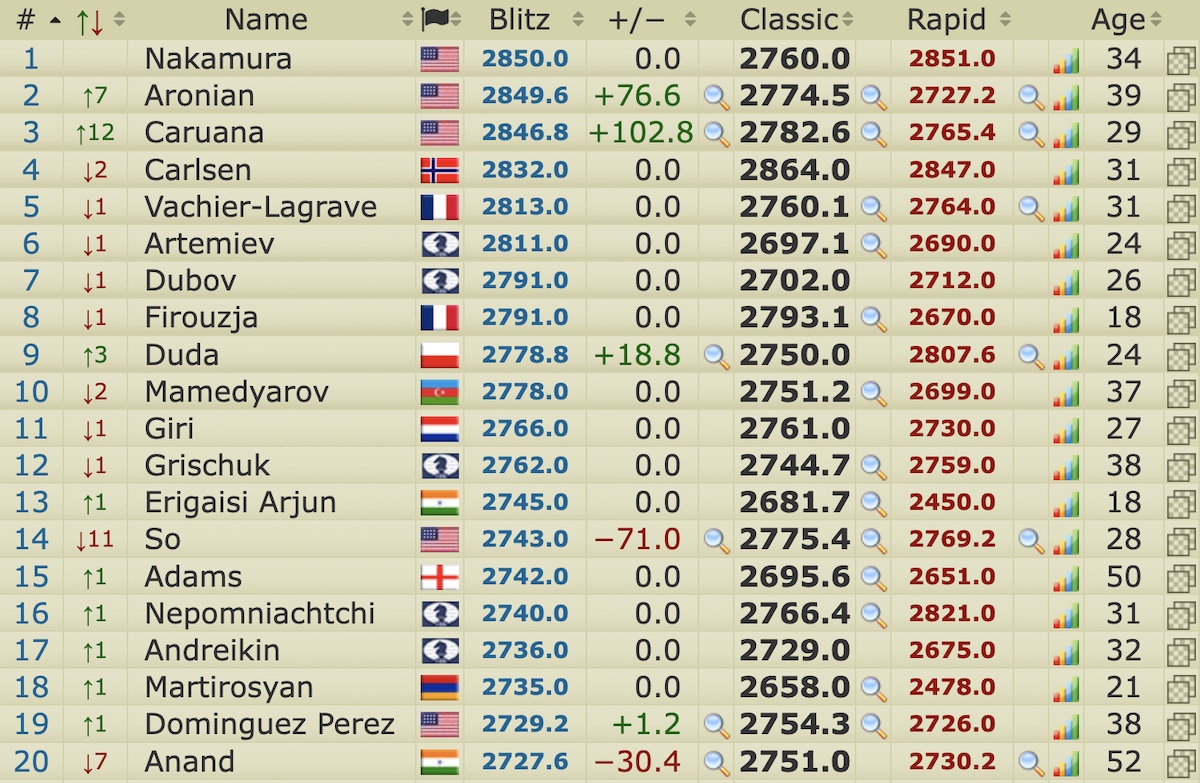 This is the unofficial 2700chess live list, but when the official list is published on June 1st Levon’s score will be rounded up to 2850.0, and as the more active player than Hikaru Nakamura he’ll take over the no. 1 spot.

Magnus Carlsen and Maxime Vachier-Lagrave might have something to say about that in one week’s time on May 30th, when there’s a blitz tournament before Norway Chess begins, while before that the Chessable Masters is entering the semi-final stage.