Jan-Krzysztof Duda scored a counterattacking win over Richard Rapport as the inaugural Prague Chess Festival got underway on Wednesday. The other games in the Masters were drawn, though only after David Navara tortured Boris Gelfand for 100 moves. Four of the five games were decisive in the Challengers, with David Anton taking down top seed Alexei Shirov and Mateusz Bartel taking full advantage of some over-ambition from 13-year-old Praggnanandhaa. 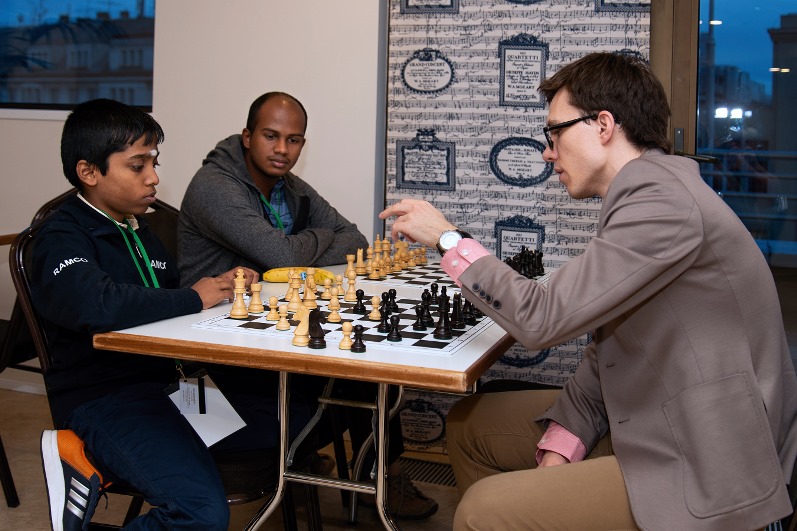 On Day 1 in Prague Mateusz Bartel got the better of Praggnanandhaa | photo: Vladimír Jagr, official website

It’s always great to see a big new event on the chess calendar, and the Prague Chess Festival, featuring 10-player Masters and Challengers tournaments alongside an open, has the potential to develop into a major supertournament. For now it’s giving an opportunity both to the best Czech players and to top players just outside of the Top 15. 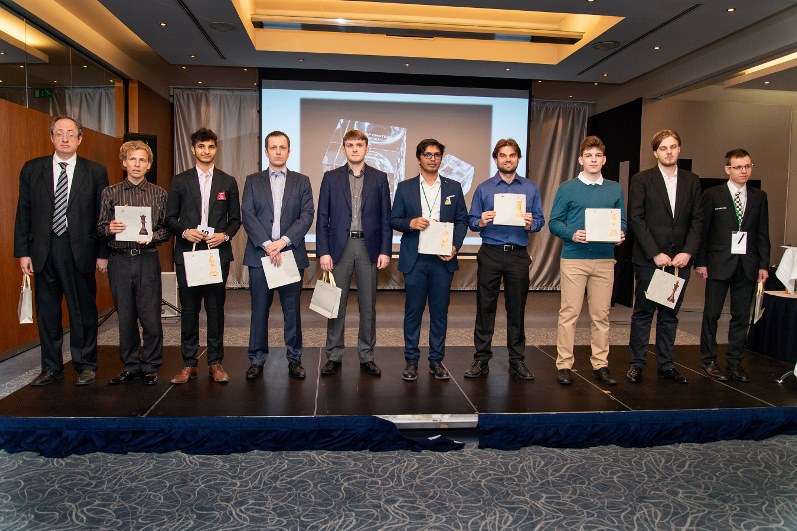 You can play through all the Masters games using the selector below:

20-year-old Jan-Krzysztof Duda from Poland climbed to world no. 20 and became the world’s top junior again, at least for a day, despite finding himself on the ropes early on against Richard Rapport. He seized the chance to counterattack when he could, and Rapport lashed out with just a minute left on his clock in a tricky position:

After the piece sacrifice 37.Ncxe5+? fxe5 38.Nxe5+ Kc8 39.Nxc6 Nxe4! Black was on top, and although Rapport came very close to drawing the subsequent ending Duda eventually fashioned a win in 94 moves. 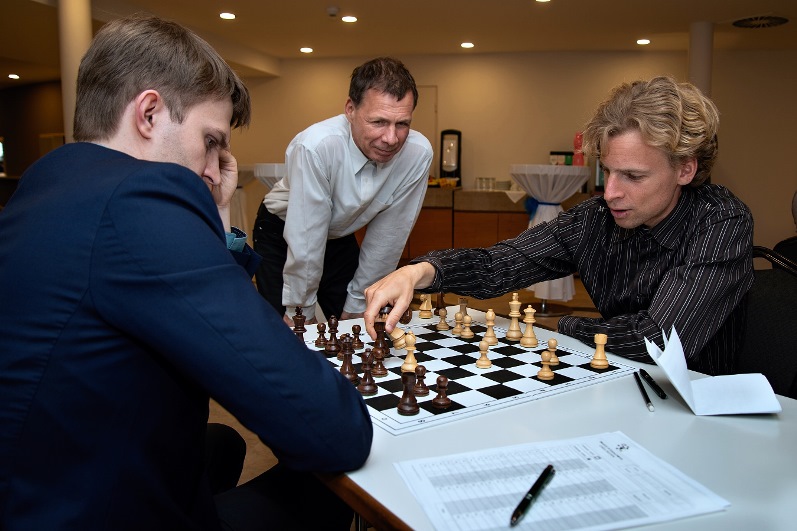 Harikrishna-Shankland was another fierce battle, but it couldn’t compare to Navara-Gelfand, which featured the Petroff Defence line we saw in the penultimate round of the Carlsen-Caruana World Championship match. That game fizzled out after Magnus spent 12 minutes on 12.Kb1, while Navara quickly went for the more ambitious 12.Bg5. That wasn’t followed up by the blunder 12…h6? 13.Bxh6! as seen in Karjakin-Harikrishna in 2016, but we did see that same sequence a few moves later!

16.Bxh6!? was the start of fireworks, with play continuing 16…Ne4 17.Qf4 Nxf2! 18.Qg3 Ng4!. Boris was finding all the right moves, but he was having to work at the board while David was still blitzing out his moves. Ultimately, though, Boris managed to limit the damage to entering a Rook + Bishop vs. Queen position:

It was White playing for a win, but 50-year-old Gelfand used all his experience to hold on for the next 70 moves, with the game ending in a draw on exactly move 100. 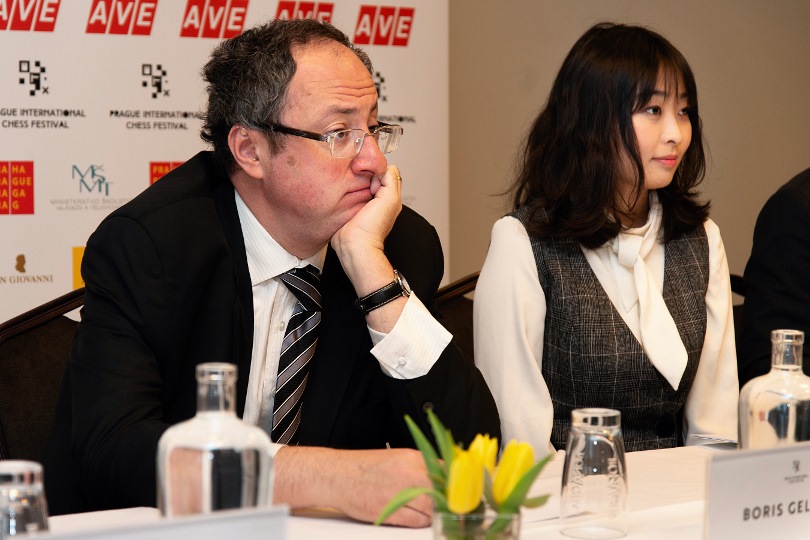 Fast start in the Challengers

The Prague Chess Festival is following the pattern in Wijk aan Zee where the winner of the Challengers will automatically qualify to play in the Masters in 2020, and that goal may have inspired some lively chess in Round 1:

Perhaps the player in the tournament with the highest profile recently has been 13-year-old Praggnanandhaa, whose task after becoming a grandmaster is now to climb the rating list in the next few years. 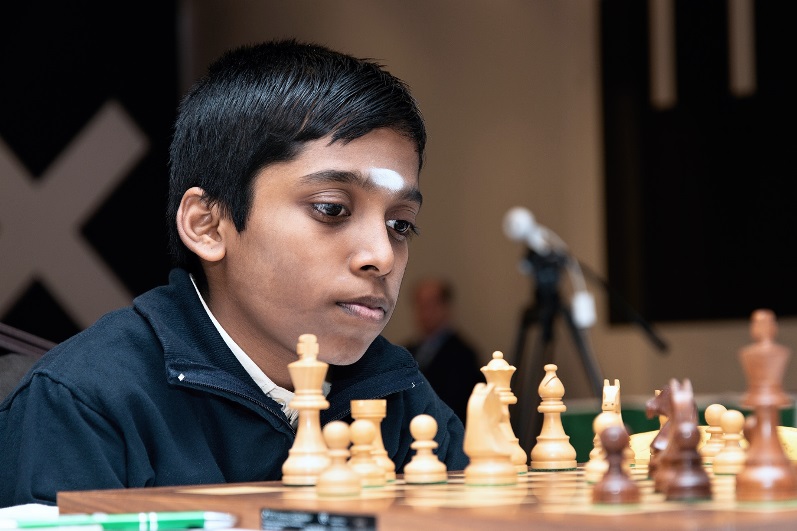 It’s going to be a long road with ups and downs, as we saw in Round 1 in Prague, where the dangerous Polish player Mateusz Bartel seized the initiative with Black early on. Like Rapport in the Masters, Praggnanandhaa hit out when things were going against him, this time with 18.f5?!

Bartel saw no ghosts and correctly replied 18…gxf5! before going on to prove that it was Black not White who would use the g-file to attack the enemy king. The Indian resigned on move 34, with Mateusz picking up the first full point of the day. 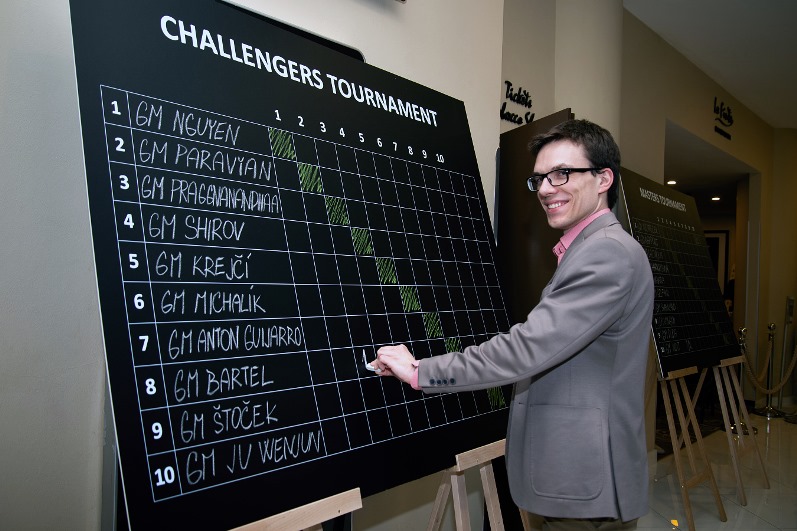 The key clash of the opening round was perhaps between veteran top seed Alexei Shirov and 23-year-old David Anton. Shirov’s return to the Spanish Chess Federation has knocked Anton down to no. 3 in Spain, but with more games like this that might change fast. Things fell apart for Shirov when, in a slightly worse position, he spent 22 minutes on 19.f3?

After 19…c5! there was soon fire on board, but the tactics were all working for Black, with Shirov also chronically short on time. When the dust settled White was down a piece and resigned on move 30.

You can follow the action in Prague from 15:00 CET each day here on chess24, with a 9-round open tournament also beginning on March 9th: Masters | Challengers | Open