Jan-Krzysztof Duda will play Wesley So in the quarterfinals of the chess.com Speed Chess Championship after beating Fabiano Caruana 17:9. “I had a feeling that the bullet would be really tough for me,” said the world no. 2, who set about establishing an early lead. He raced to 3:0 and then 4:1, but when he lost the next four games he was always fighting an uphill battle. The scores were close until the 1-minute games, but then Duda broke through to win an amazing 8 of the 9 games and cruise to match victory. 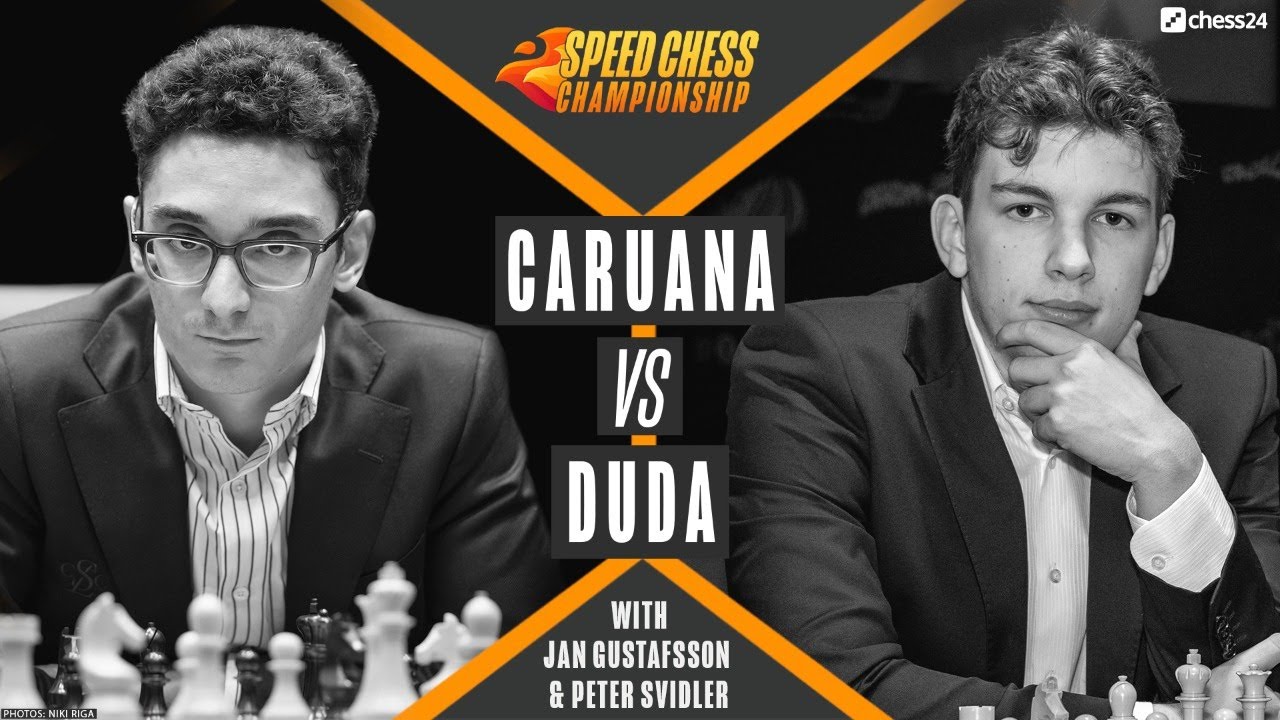 You can replay all the games from the Duda vs. So match using the selector below.

And here’s the day’s live commentary from Peter Svidler and Jan Gustafsson.

Polish no. 1 Jan-Krzysztof Duda was announced on Friday as playing in the Skilling Open, the first event on the $1.5 million Champions Chess Tour. On Saturday he took on chess24 users in Banter Blitz, at times displaying fantastic tactical vision when low on time in tricky positions.

I think to be in good shape one has to play all the time in bullet, because otherwise you’re just too slow, but as I said that was extremely lucky today, definitely the score was too high.

Jan-Krzysztof had also recently qualified via the Speed Chess Invitational, where he’d had to overcome such giants as Jeffery Xiong (8:4), Alexander Grischuk (7.5:3.5) and Sergey Karjakin (10:4).

Fabiano had taken a different approach:

I wasn’t playing any bullet, I also wasn’t playing any blitz before. I’ve sort of been on vacation here and I haven’t really wanted to play online chess too much before this match, and ok, I don’t think I’m going to improve massively by playing a few bullet games before the match. It’s sort of like I’m just panicking when I’m down to seconds, and this is not a thing that you can really correct in a day or two.

Fabiano is fastest out of the blocks

At first, however, in the 5-minute games, it all went Fabiano Caruana’s way. He played the French Defence, provoking some scepticism from our commentators.

But, after some shaky moments in the middlegame, it worked! Black won, and Fabi followed up with two convincing wins to get off to a perfect start.

It could have been four wins in a row, but although Fabi missed a tricky win and went on to lose he soon brushed that aside. He wove a mating net in Game 5 to take a 4:1 lead. Little did he know, however, that that would be his high point of the match.

Sometimes the mere fact of losing a game is less important than how you lose it, and Game 6 was a real crush. Duda was better with Black in 12 moves, winning in 14, and got to finish off with the exquisite 22…Qd4!!

“I also lost this really, really unnecessary game when Jan-Krzysztof took on f4 and I lost in like 10 moves with White - that was a big disappointment around that moment”, Fabiano would say later. He went on to lose the next three games as well, saying of his choice of continuing to play the French, “I was getting these strategically awful positions”.

The calm before the storm

Duda had not just levelled the scores in the 5-minute games, but taken a 5:4 lead, while the 3-minute games were finely balanced. Wins were traded, and in fact we hadn’t seen a single draw.

Then in game 14, when Duda looked set to finally open up a 2-point lead, the Polish no. 1 spoilt his advantage and we got a first draw. The 3-minute section would end with another three draws, which meant that Jan-Krzysztof had a 1-point advantage going into the bullet.

A bullet with Fabiano’s name on it

Everything Fabiano feared came true in bullet chess, with our commentators feeling that the world no. 2’s loss of an equal ending in the first game was a tough blow.

In fact Duda would win the first four bullet games, with the fourth summing up Fabiano’s day.

You’re not often going to get to see one of the most tactically gifted chess players in history miss mate-in-1 in two consecutive moves and then, just to put the cherry on the top, miss mate-in-2 on the next move. Even after 41…Qxg2?? 42.Bf6 Qxf3+?? 43.Kc4 Qxh5?? Fabi was still winning, but he ended up losing the game.

He did briefly hit back in Game 5, but the outcome of the match was already clear and Duda wrapped things up with another four wins in a row. “I thought I was extremely lucky today in bullet,” said Duda afterwards, but that would be to downplay the brilliance he showed with so little time on the clock.

In the final game there was only one clear winning move after 38.Ne4.

Jan-Krzysztof now goes forward to a quarterfinal against Wesley So. Earlier top seed Hikaru Nakamura had, as expected, blown away bottom seed Haik Martirosyan. The final score was 21:5, with Hikaru starting with 7.5/8 and only losing a single game over the course of the match. There’s one last quarterfinal to be decided.

Anish Giri takes on Vladislav Artemiev on Monday for the right to play Magnus Carlsen. We’ll be covering the action live here on chess24 from 18:00 CET!