Duda and Praggnanandhaa impress in Prague

Chess talents appear in waves and the Prague Chess Festival is showcasing two of those waves. 20-year-old Jan-Krzysztof Duda is, like contemporaries Vladislav Artemiev and Wei Yi, knocking on the door of the elite right now, and the Polish star became the sole leader of the Prague Masters after winning three of his first five games. 13-year-old Praggnanandhaa is one of a generation of Asian kids who may dominate chess in a decade, and after beating Ju Wenjun and Alexei Shirov in consecutive rounds he joined the leading group in the Prague Challengers. 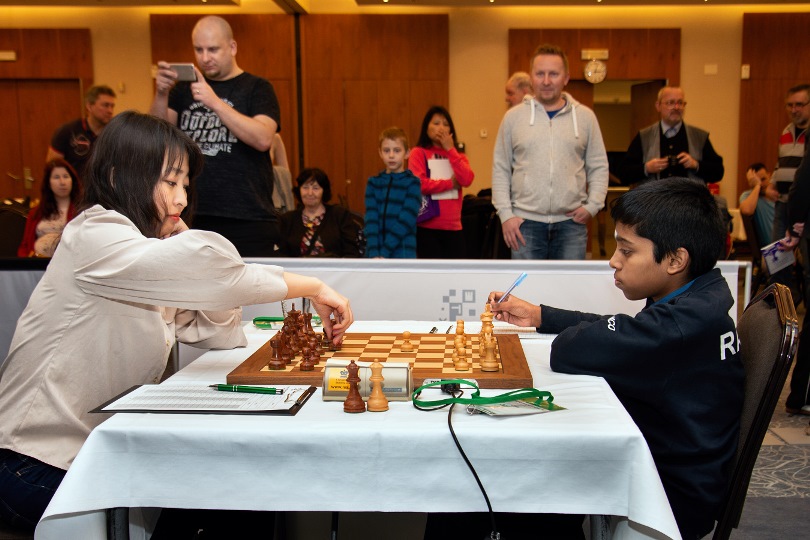 The Prague Masters players had a rest day on Monday after five action-packed rounds – you can replay all the games from the tournament using the selector below:

We’ve seen some wild positions in Prague, with perhaps no move having greater shock effect that Nikita Vitiugov’s 15.Bh6! against Harikrishna in Round 2: 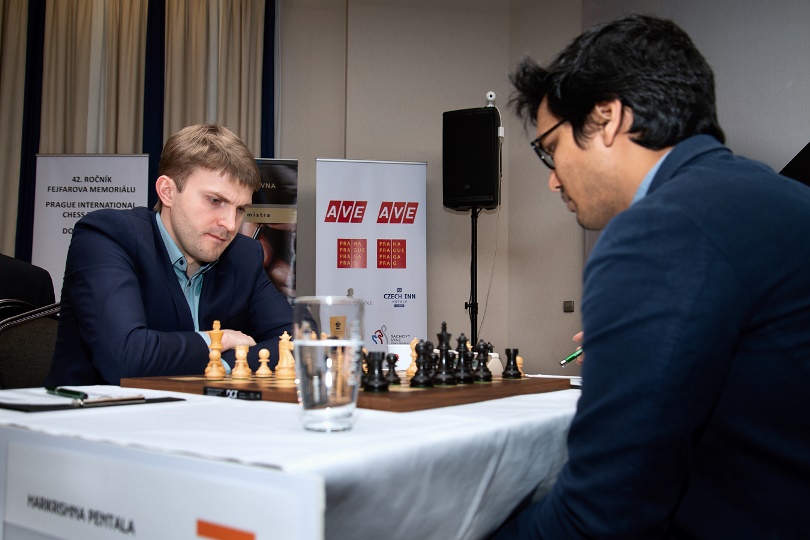 Nikita Vitiugov got to play some Romantic chess, with a little help from his computer! | photo: Vladimír Jagr, official website

He admitted afterwards that his computer had shown 15.Bh6! in that line of the Berlin on the morning of the game, and that if Black had replied 15…Rg8! then after 16.Bd2 White would only have gained a slight advantage:

That game could have been a hard blow to recover from, but in the following round it was Hari who got to have all the fun as he out-prepared Duda in an obscure variation of the Sicilian. He commented that 10…Ng6 (10…d6!) was already the “crucial mistake”, with the last straw coming with 13…e6? 14.Ba5!

After 14...b6 15.Bxb6 Nf4 16.Qh4!, the move Hari felt Duda missed, Black was soon simply a piece down, with the remaining moves superfluous. Hari suggested 13…e5 instead, while 13…b6 is the computer choice for Black. 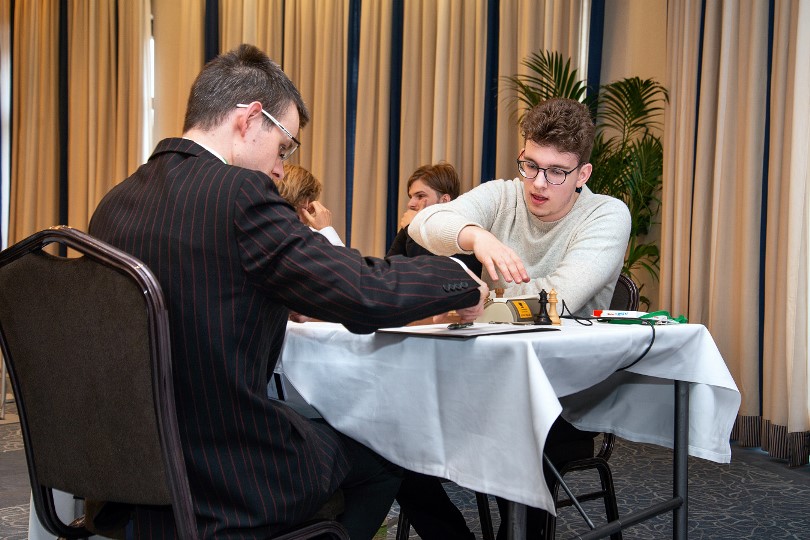 The pattern of players shrugging off crushing defeats continued, however, as in the next round Duda suddenly got to pounce in what he admitted hadn’t been a perfectly played game up until that point against Czech no. 1 David Navara:

Another player to bounce back from misfortune was Sam Shankland. The US Champion was under pressure against Boris Gelfand in Round 3, but at worst could have sacrificed his bishop for the e7-pawn and played the theoretically drawn Rook vs. Rook + Bishop ending. Instead he blundered with 57…Kf7?? 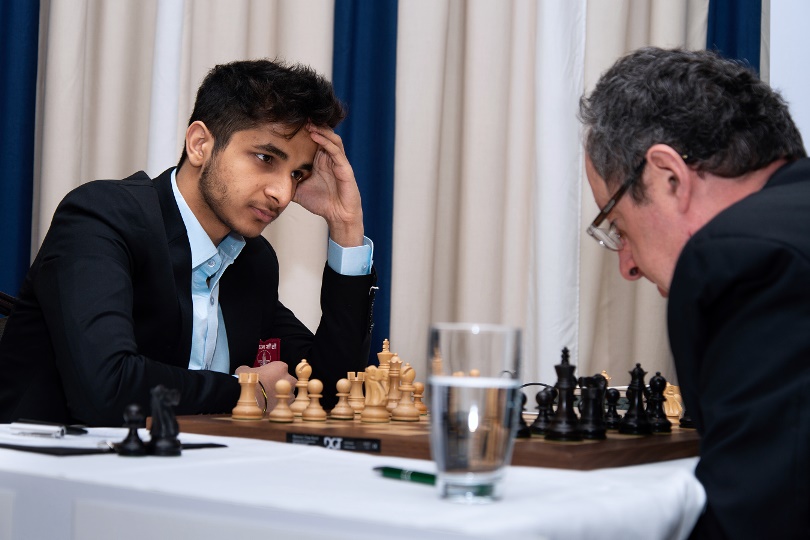 That was in turn a bounce-back victory for Gelfand - yes, it's hard to keep up! - as he'd lost to Vidit in the previous round | photo: Vladimír Jagr, official website

Boris Gelfand was asked afterwards if he’d been inspired to find that study-like ending by the presence of his countryman Yochanan Afek in Prague:

In the very next game Shankland did well out of the opening against Vidit, though the Indian grandmaster later got to play an attractive X-ray move that seemed to solve his problems:

In the game after 27.Qb8+ Kh7 28.Qb3 Qd4 29.Qe3 Qb2 Black had a powerful attack despite being three pawns down and went on to win convincingly. Sam was happy to get that win after what he described as the “disaster” the day before:

As we saw with 21.Qxa7 there, not all beautiful moves work out. Richard Rapport found that out in the following position:

30…Qe6? was perhaps hard to resist for a creative player like Rapport, attacking two pieces and offering a queen sac, though of course 31.Bxe6 runs into 31…Rb1+ and White is mated. The problem was that Radek Wojtaszek replied with the even better double (or triple) attack 31.Qc7!!, and White was simply winning. Instead 30…Qh4! (or 30…Rb1+ first) was a draw, with one line continuing 31.Qe1 Rb1! and White can’t take the rook without losing the queen to 32.Qxb1 Qh2+ 33.Kf1 Qh1+.

Wojtaszek joins Vitiugov as the only unbeaten players in the Prague Masters, after Navara missed a great chance to beat him in Round 5. That left local heroes Navara and Viktor Laznicka as the only players yet to get a win, with Duda top of the table:

When we first reported on events in Prague 13-year-old Indian Grandmaster Praggnanandhaa had lost his first game with the white pieces to Poland’s Mateusz Bartel. Fast forward 5 rounds, though, and Bartel is in joint last place after losing three games, while Praggnanandhaa is in a 5-way tie for first place after picking up wins in Rounds 5 and 6. You can play through all the action below:

The sole leader going into Round 5 had been Women’s World Champion Ju Wenjun, but Praggnanandhaa went on to beat her after preparing an idea in the Petroff line Wenjun had used in Round 1. He went on to grind out an impressive endgame victory:

Then in the very next round he again came well-prepared for a Giuoco Piano against top seed Alexei Shirov, gaining an extra pawn by move 15. 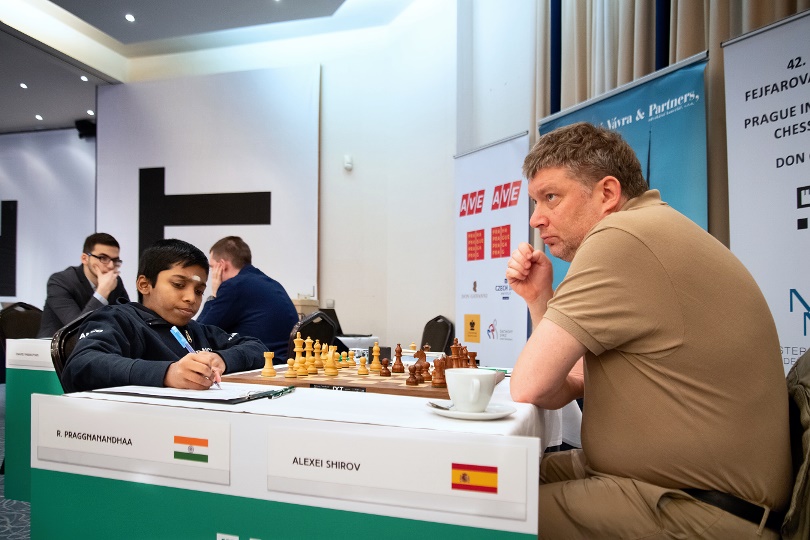 Alexei Shirov is a fine endgame player, but Praggnanandhaa matched him all the way | photo: Vladimír Jagr, official website

Long-suffering Praggnanandhaa fans were left biting their nails in the mutual time trouble that followed, but the youngster didn’t put a foot wrong, and in the end it was again a carefully nurtured passed pawn that won the day:

That earned Praggnanandhaa praise from his highly respected coach:

With 3 rounds to go Praggnanandhaa is second on tiebreaks behind Peter Michalik, whose Round 5 escape was memorable!

Every player in the Challengers has won and lost at least one game:

There are no more rest days in any of the events and you can follow the action in Prague from 15:00 CET each day here on chess24: Masters | Challengers | Open